47°29'50"N 000°34'23"W
runway: 13/31 - 1230x00m - concrete (CLOSED)
Angers-Avrillé airfield (french: aéroport d'Angers-Avrillé, ICAO: LFRA) was an airfield 260 kilometers southwest of Paris.
The airfield was built in 1913, 4 years after the Aéroclub de l'Ouest was founded. It was built on a 1,260m2 plot of land, donated to the city of Angers by the Comité d'Aviation de l'Anjou (Anjou Aviation Committee). On 16 May 1914 the landing site was inaugurated.
The first training center for reserve pilots was established in 1920, followed by a training center for civilian pilots in 1922. Following a decision of the city council of 21 July 1927, the city decided to sell the buildings and hangars from school to the Aero Club of the West. It came with a provision however: the school, one of three run by the Compagnie Française d'Aviation (CFA), would have to train both civilian and military pilots. The War Department supported the initiative. Soon Air France noted that the facility would be insufficent, as it could train only 20 pilots. Air France recognised the need for the school to be around 50 pilots.
A completely new school was built between 1937 and 1938. The building, two storeys high, with a length of 90m and 8m wide was located at the south side of the airfield, parallel to the road to Avrillé. At the entrance of the airfield the flying club erected a memorial milestones of aviation in Anjou. Mentioned were the first flight of René Gasnier in 1908, the first city-to-city race in 1910, the first major air tour in 1912, the first pilot training center in 1920 and the first race of the twelve hours of Angers in 1934. The monument was revealed on 29 January 1939. On 1 September 1939 the new school welcomed its first students, two days before France declared war on Germany. By the end of the year, the school had 120 student pilots, 79 non-commissioned officers and 140 troops.
Student pilots underwent rigorous training flying on planes like the Morane MS 191 or 182 Hanriot, but soon replaced with Morane 230 and Potez 25, of which the airfield had 40 to 50 examples. Unfortunately the pilots did not graduate to operational flights before the Battle of France broke out. About 17 of them managed to escape to England however, graduated, and fought from there. 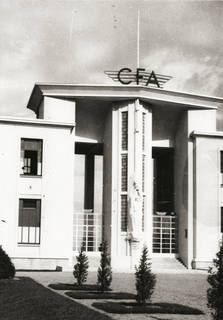 The front side of the new flying school in 1939 (Muséé de l'Air, via angers.fr).
The advance of the German troops caused the aircraft to be dispersed over 6 airfields in southwestern France. Another 27 were left unservicable at Angers. The Germans occupied the airfield from summer 1940 and turned it into an important base for German air defenses over 17 western departments of France. They expanded the airfield and built a concrete runway. In 1942 they camouflaged the flight school with paint (Still visible in 1999!) and built a large metal hangar northeast of the CFA school. The airfield was bombed by Allied aircraft on 15 August 1944.
After the war 44 million Francs were allocated to the restauration of the airfields training centre and the hangar, but when work was half completed the work was halted. Following a ministerial decision which nationalized the training of civil aviation in 1945, the CFA ceased all training of pilots and abandoned the airfield.
The school building had its first acts of vandalism, which amongst others resulted in the theft of its central heating radiators. The building was maintained however until 1960. The flying club used the north wing and the aircraft hangar for a while, but soon abandoned it. 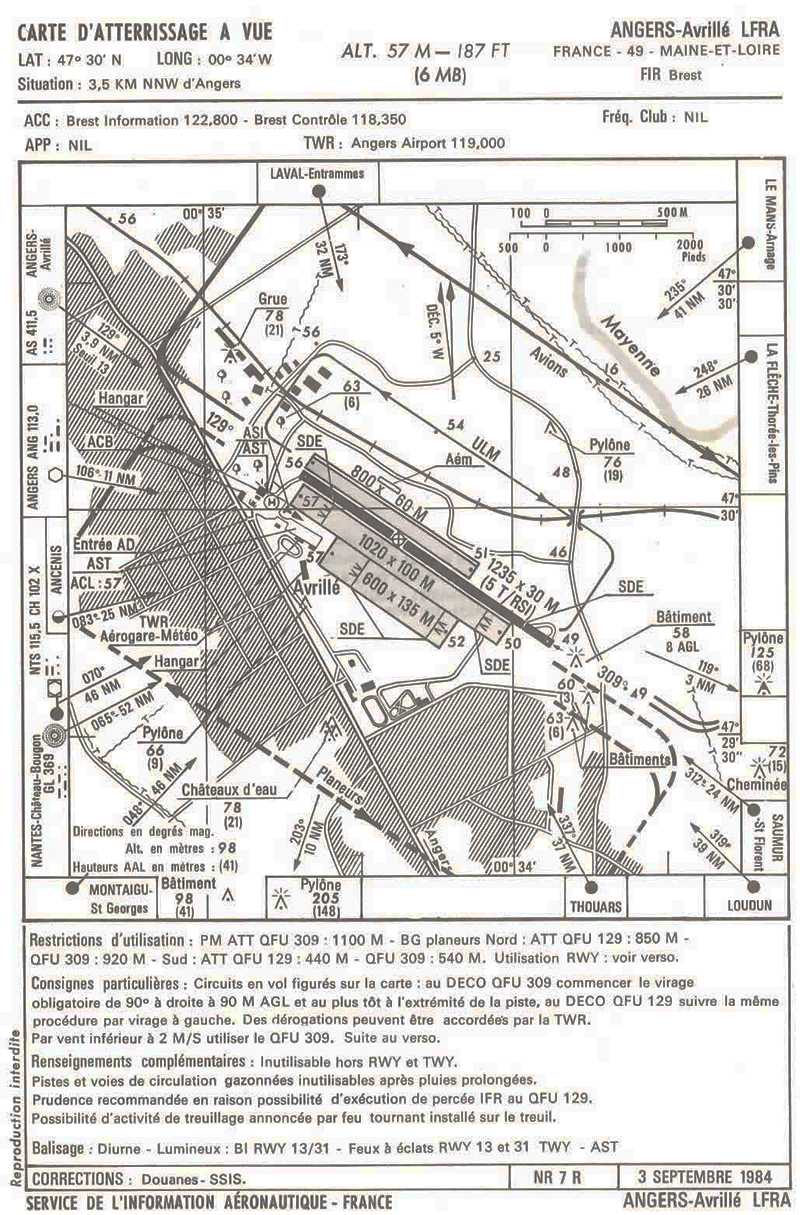 1984 approach chart for Angers-Avrillé airfield, showing it had not one, but four parallel runways, for gliders (planeurs), aircraft (avions) and Ultralight aircraft (ULMs).  (SIA, via Olivier).

The airfield itself continued to be used until 1998. It closed permanently on 31 October 1998 because over the years the city had encircled it. To grow as a regional airport it needed to expand, which was impossible. In 1998 it was replaced with a new airfield: Angers Loire Aéroport (ICAO: LFJR). 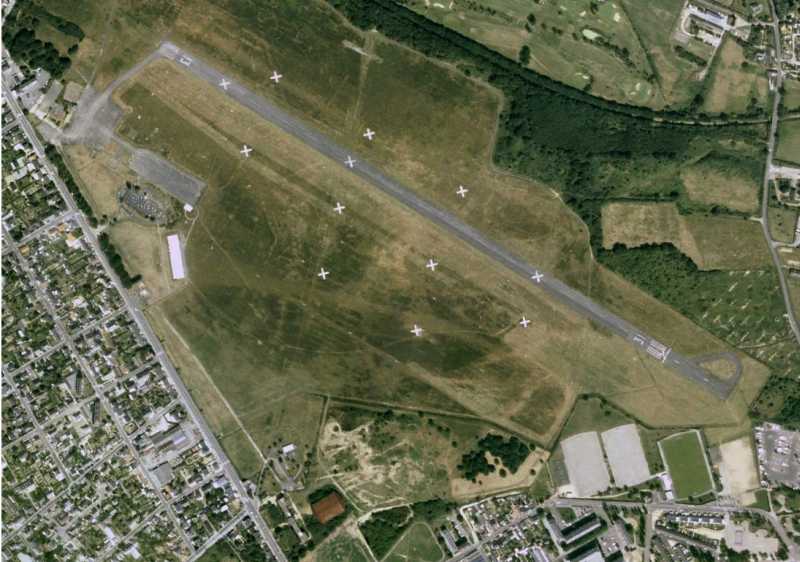 Overview of Avrillé in 2002, with clearly visible Xs for 'Closed' markings over all four of the airfields runways. The brown old metal German hangar is visible in the center-bottom of the picture (Google Earth).
The old CFA flight school building was restored and reopened in 2005. The airfield was completely torn up between 2000 and 2010. Part of the airfield made room for a new Route Nationale. Since 2010, no airfield infrastructure remains and the airfield is slowly being built over. 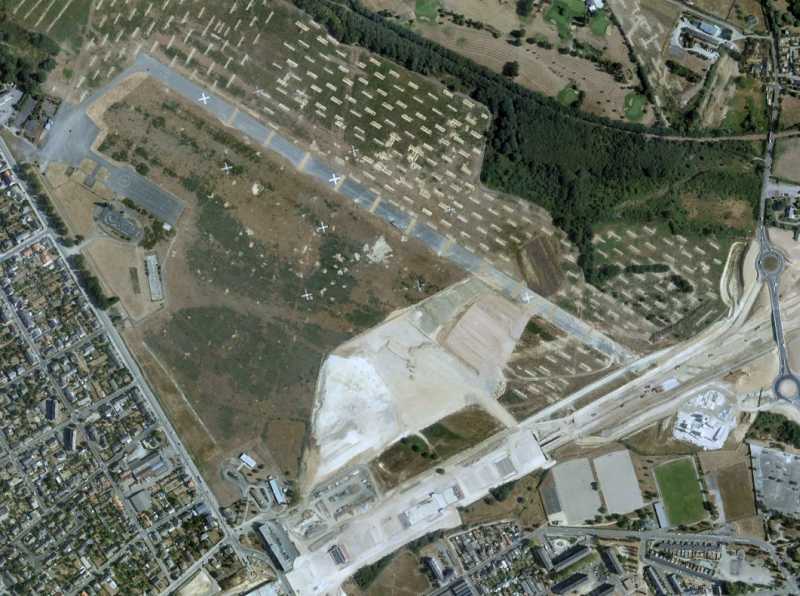 Overview of Avrillé in 2006. The new Route Nationale is under construction and the runway is beginning to get torn up. The old hangar was demolished (Google Earth). 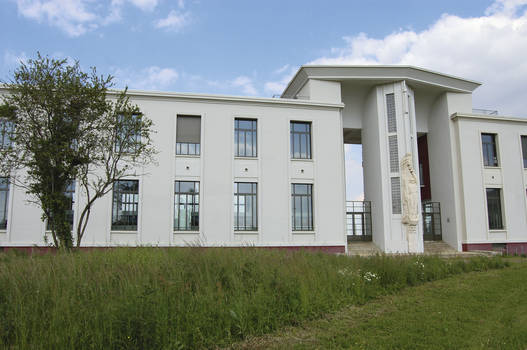 The front side of the flying school after the renovation (angers.fr). 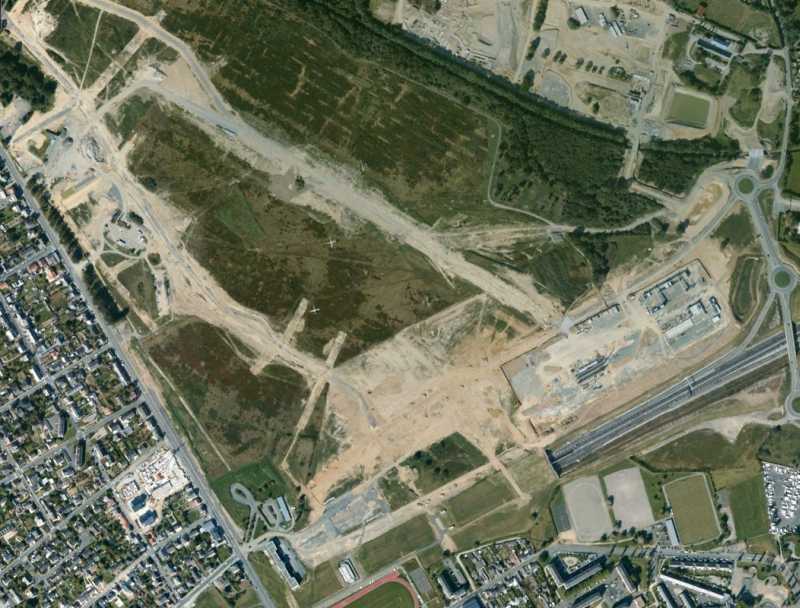 Almost nothing remained of the airfield in 2008, only the flying school, close to where the German Hangar was located remains unharmed (Google Earth).
contact us about this airfield