Anthorn air field (also known as RAF Anthorn, RNAS Anthorn and HMS Nuthatch) was an airfield approximately 430KM north-northwest of London
The airfield was built in february 1918 as a Fleet Air Arm (FAA) airfield. It was abandoned after World War I ended, however. The RAF reinstated the airfield at the beginning of World War II as an emergency landing ground for nearby RAF Silloth.
The site was taken over by the Royal Navy in December 1942, and renamed the site RNAS Anthorn. It was commissioned in September 1944 as 'HMS Nuthatch'. The airfield served as No. ARDU (Aircraft Receipt and Dispatch Unit), a unit that accepts aircraft from their manufacturers and prepares them for operational use. The last official flight took off from the airfield in November 1957. It was then put on Care and Maintenance, before it closed down in March 1958.
In 1961 the site was chosen to become a NATO VLF transmitting site for communicating with submarines. Construction of the site, by Continental Electronics of Dallas, U.S.A., began in 1962. The station was accepted on behalf of the MoD in November 1964.

A ca. 1942 map of the airfield, showing the relative positions of the wireless buildings (circled) to the air-station. Camps 1 and 2 were where the matelots and WRENS (Women's Royal Naval Service) were billeted: Matelots in Camp 1; WRENS in Camp 2 (R.W. Barnes).

Since its installation the site has been constantly updated and expanded in functions. Over the years an LF transmitter and a LORAN transmitter have been added. On the terrain 13 masts, measuring 227meters (745ft) are arranged in two rings around a central mast. for the VLF antenna 4 grounded antennas are hung on each mast. The LF antenna is a T-shaped antenna spun between two masts.
The Admiralty homes of the former RNAS, constructed in 1952, were converted into regular homes, which now make up the village of Anthorn. 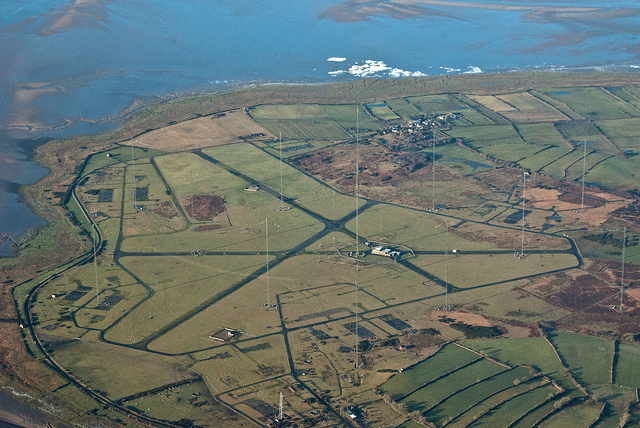 A January 2011 view of the aerial farm at ex-RNAS Anthorn. The layout of the airtfield is still clearly recognisable (Flickr, click to go there). 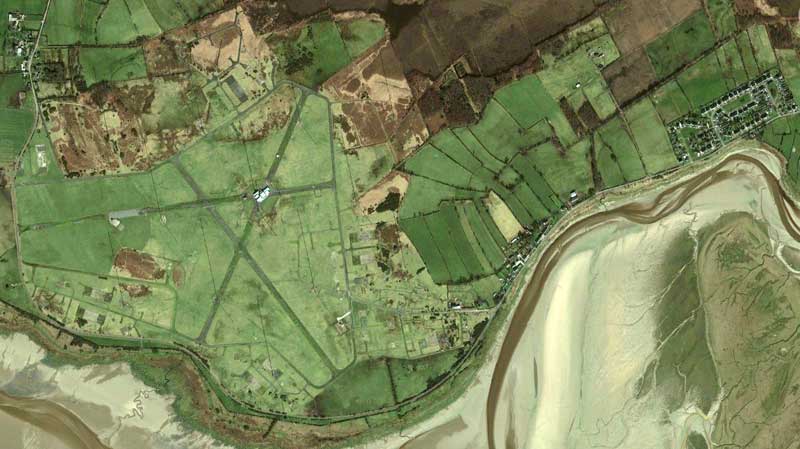 The former airfield in 2011, showing the outlines of the airstation as well as the current radio antennas. Locations of runways, taxitracks, hangars and dispersals can still be accurately located, the Admiralty camp (today Althorn) can be seen on the right (Google Earth).