Attlebridge airfield (RAF Attlebridge) was an airfield 155 kilometer northeast of London.
The airfield became operational with 3 runways at 1,220, 1,120 and 1,080 yards length for use by 88 Sqn from August 1941 to September 1942, using Bristol Blenheim IVs and Douglas Bostons in anti-shipping missions and attacks on ports. Although operational, the airfields construction was not complete until August 1942.
From 12 September 1942, the United States Army Air Forces 319th Bombardment Group (Medium), flying Martin B-26 Marauders, began to arrive at Attlebridge from Harding Field, Louisiana. The aircraft assembled here in October and November for training and staging to Algeria, in the Mediterranean theater of operations, where they were assigned to the Twelfth Air Force.
From 30 March 1943, Attlebridge was used by 320 (Dutch) Sqn (Royal Air Force), flying North American B-25 Mitchells. They were joined by 1508 BAT Flt (a Blind Approach Training flight) with Oxfords the following month. The squadron was reassigned to Second Tactical Air Force on 1 June and tasked with attacking enemy communications targets and airfields. 247 Sqn briefly deployed to the station in August to counter Luftwaffe attacks on the coast, but those ended as soon as they began and the Typhoon Ib's were withdrawn. The squadron relocated to RAF Lasham on 30 August 1943 and the BAT flight left that same month.
Attlebridge closed in the fall of 1943 to be rebuilt for the second phase of its existence. Its runways were lengthened and dispersals were laid out as part of the upgrade to Heavy Bomber status. 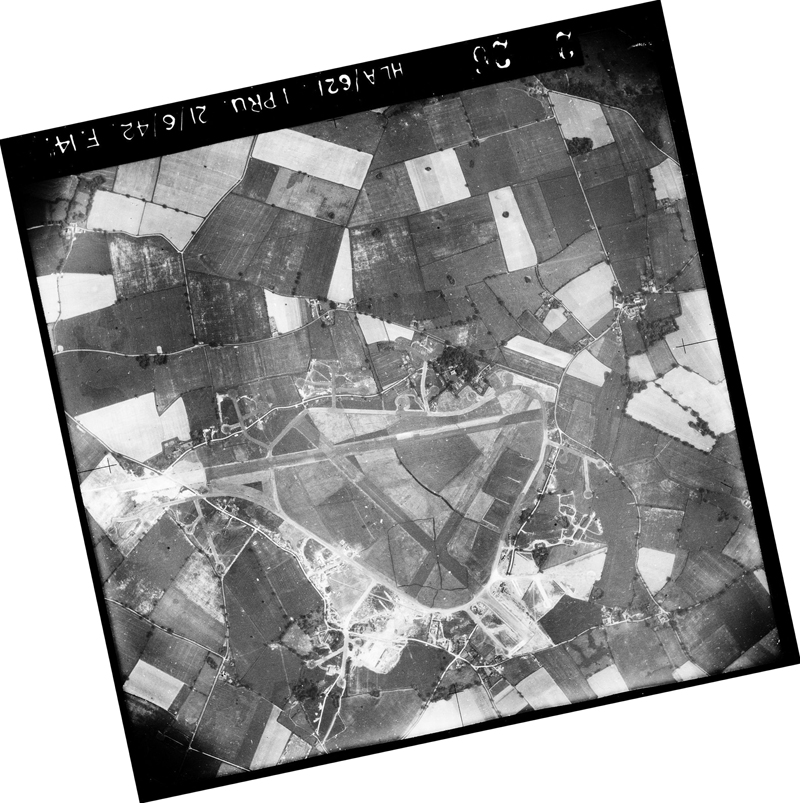 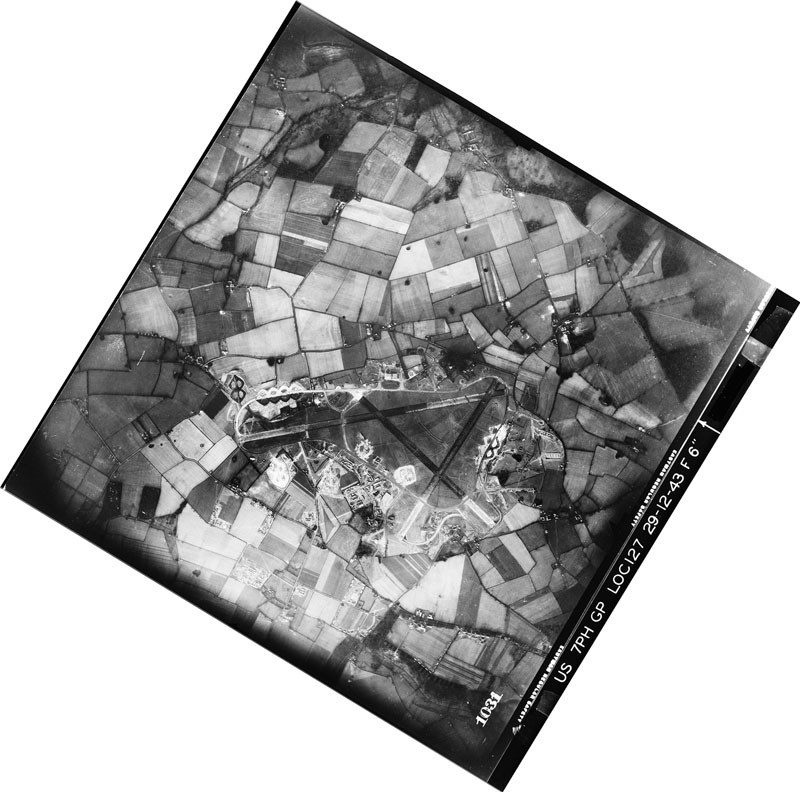 The rebuilt and completed RAF Attlebridge, photographed on 29 December 1943 (Wikimedia)

Attlebridge was assigned to the 2nd Bomb Wing of the United States Army Air Forces (USAAF) Eighth Air Force and given USAAF designation Station 120. It thus reopened as an American base on 7 March 1944, to be used by the 466th Bombardment Group (Heavy), which arrived from Topeka Army Air Field, Kansas. The Group was assigned to the 96th Combat Bombardment Wing. It carried the group tail code: a red tal with a horizontal white bar and red letter M, on their B-24 Liberators. 466BG(H) had four operational squadrons: 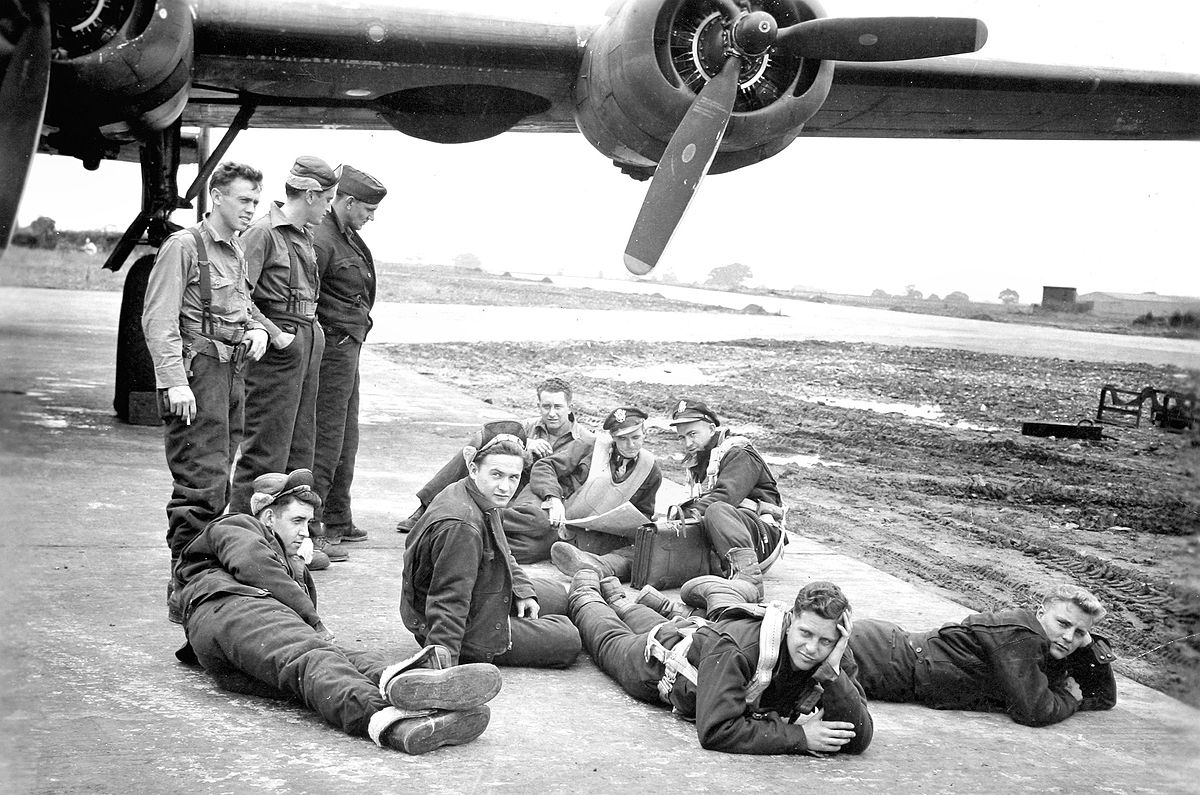 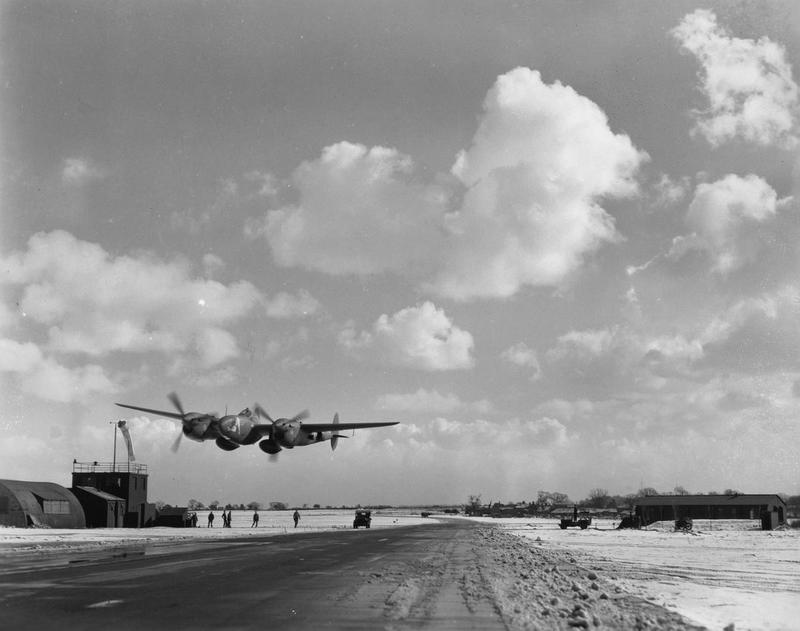 An F-5 Lightning of the 7th Photographic Reconnaissance Group take off from the snowy runway at Mount Farm. (original caption) This photo was actually taken at Attlebridge in February 1944. A detachment of 22nd PRG F-5C's were based there for three weeks. They flew approximately 15 sorties during that time. This is F-4C-1-LO #42-67114 "Maxine" buzzing Attlebridge. This was Lt. Malcolm Hughes a/c. The 466th BG had just arrived and were still preparing for their combat missions which would start on 21 March 1944. (Chris Brassfield - 466th BG Historian, via American Air Museum)

Attlebridge control tower, 1944/1945. Compared to the tower in the photo above, the tower had gained a 'glass house' control tower on top of the watch office sometime after March 1944 (2nd Air Division Memorial Library).

During combat operations, the 785th Bomb Squadron had flown 55 consecutive missions without loss. Altogether, the Group flew 232 combat missions with 5,762 sorties dropping 12,914 tons of bombs. They lost 47 aircraft in combat, of which 6 were lost in a single mission to Brunswick.

When the war was over, the group redeployed to the United States during June and July 1945.
Attlebridge was placed in "care and maintenance" status for a few years, but it was eventually permanently closed in 1950. It was sold to Bernhard Matthews Limited in March 1959, chosen as a site for extensive poultry rearing. They built rows of turkey houses line the runways, isolated from each other to escape the infectious diseases to which turkeys are prone. 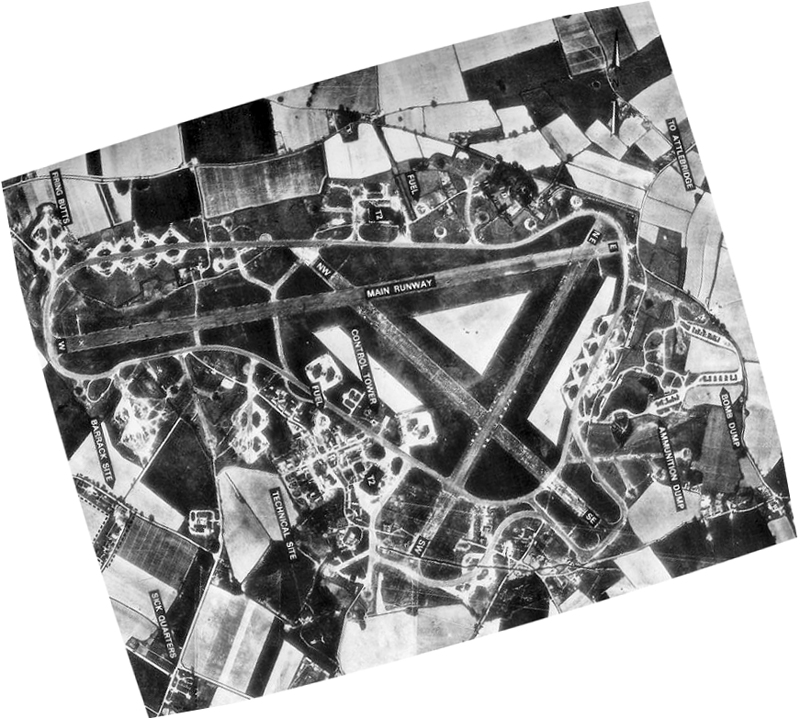 Attlebridge on 16 April 1946, rotated to show the proper North (Wikimedia)

Most of the runways, perimeter track, and a few of the aircraft parkings still remain. Also remaining is the control tower, which is now extensively renovated and used as an office building by the owners of the site. The briefing room and HQ block still exist, the latter being used as a private house. The T-2 hangars have long been gone but a few of the old Nissen huts and other structures remain on some of the dispersed sites, used for a variety of purposes.
During a reunion in 1992 a memorial was dedicated at a crossroads near the airfield.
A small portion of the western side of the former airfield no longer exists. The main runway was shortened and the perimeter track removed west of the Weston Green Road. Two windmills and a large section of the south side of the former airfield now serve as a wind&solar energy park. 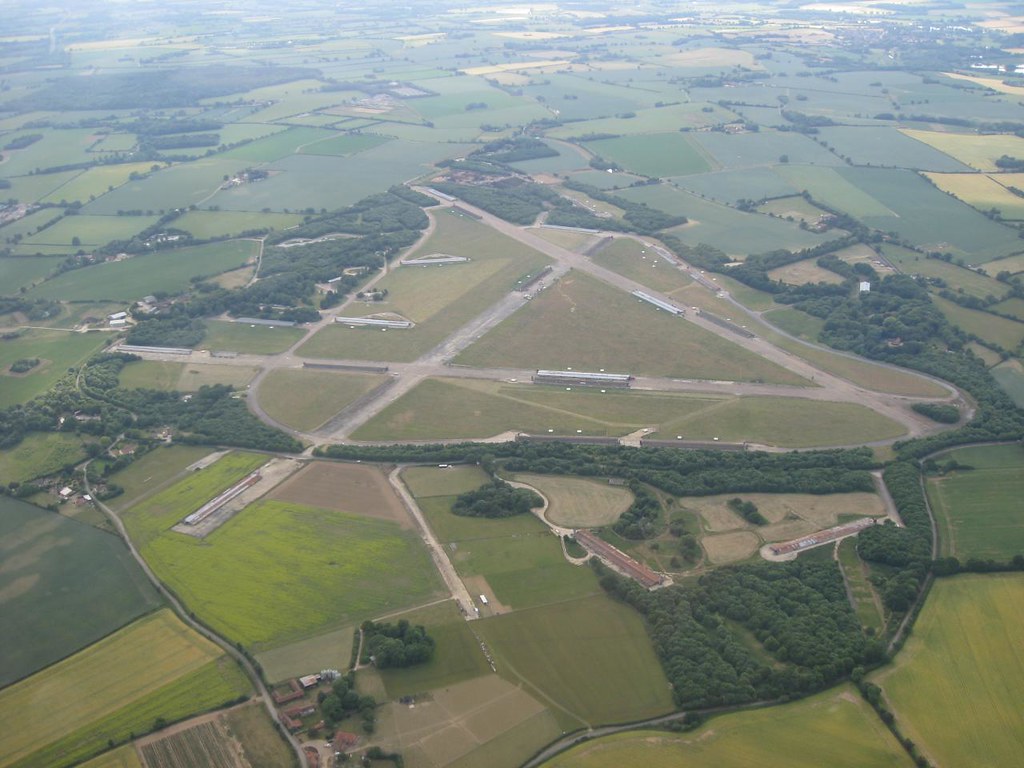 2011 view of the former airfield (Callum Dodds, on Flickr) 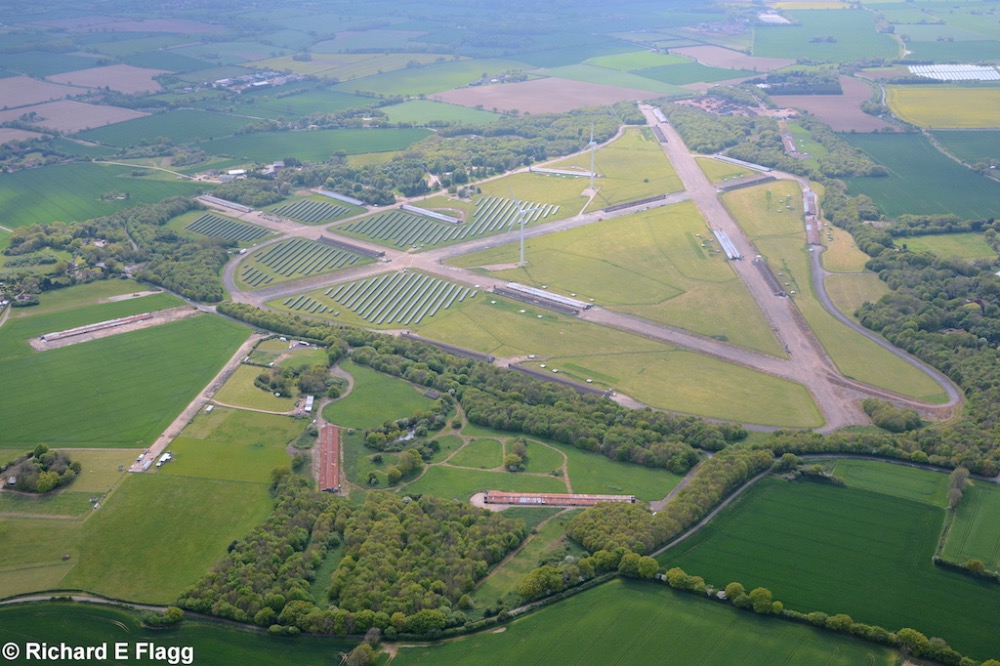