Air field Bailleul (French: Aerodrome de Bailleul, Dutch: vliegveld Belle) was an airfield complex to the east and northeast of Bailleul (dutch: Belle), northwest of Lille (Dutch: Rijsel) in France.
Bailleul consisted of 3 flying fields next to each other. Officially the flying fields were three seperate airfields by the names of 'Town Ground Aerodrome', 'East Aerodrome' and 'Asylum Aerodrome', but as they were bordering each other and sharing much of their infrastructure (such as a railway connection and tent camps) they are considered as one for this site.

'Town Ground' was in use since 1915 by 6Sqn Royal Flying Corps, followed by 42 and 53 Sqn and 3Sqn Australian Flying Corps. It had a large flying field to the east of the town center with severeal hangars and wooden barracks to house staff and pilots. The squadrons took part in the two battles of Ypres (Dutch: Ieperen) and operated in the surrouding area during fighter, attack and reconnaissance missions. Several of its pilots are still buried at the local cemetary acorss the road from the former airfield.

A flight of Australian aircraft of (No 69 Squadron AFC (later No 3 Squadron)) at the Bailleul Airfield, France used for artillery observation and the registration of gun fire. (Australian War Memorial).

The second aerodrome ('East') was built to the northeast of the town, east of the local asylum for the insane. Its location led to much protest from the director of the asylum, who feared his patients would become expopsed to airplane noise, and especially to German bombings. His fears were not unfounded, because in 1915 a 380 (!) mm shell aimed at the airfields led to the death of 4 english nurses, while injuring others and causing damage to the buildings. A German air raid by several aircraft in 1916 also struck the airfields, scaring the residents.
The airfield was intended for use by the Royal Naval Air Service. It had a very rudimentary infrastructure, some light sheds and canvas hangars along the road for maintenance and accomodation. Across the road a tent camp, truck parking and a loading dock for trains (with a seperate track from the local station) were located.

The last field ('Asylum') was built as early as November 1914, when the first British troops arrived in town. In spite of heavy protests from the asylum management they set up camp immediately north of the complex. The forced 'cohabitation' did have its advantages to the asylum, as it permitted loads of coal for heating and soap for the showers. The troops benefitted too, because their laundry was dome at the asylum for a reasonable sum. The finance was a welcome bonus for the asylum during the war years, enabling it to continue caring for its patients.

The entire complex existed until 1918. In April 1918, the airfields were destroyed by a German offensive that also destroyed 98% of the town of Bailleul. Since the 1918 attack the area has changed very much and nothing remains of the former airfields. 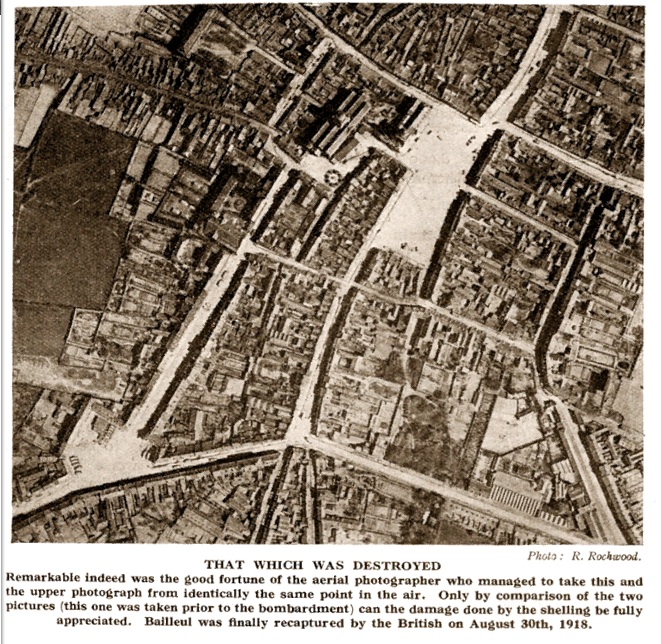 The town of Bailleul before the German offensive of April 1918 (GoogleEarthHacks.com). 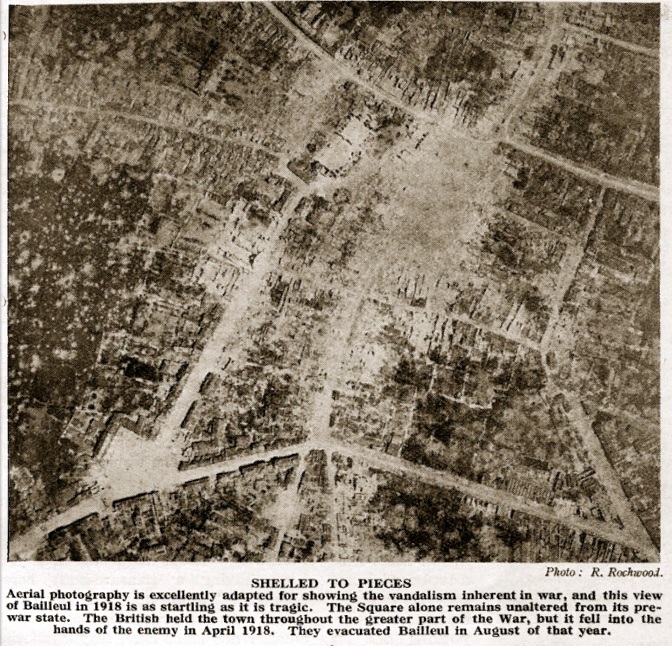 The town of Bailleul after the German offensive of April 1918 (GoogleEarthHacks.com).
KMZ files for both photos in Google Earth can be loaded from the links supplied. 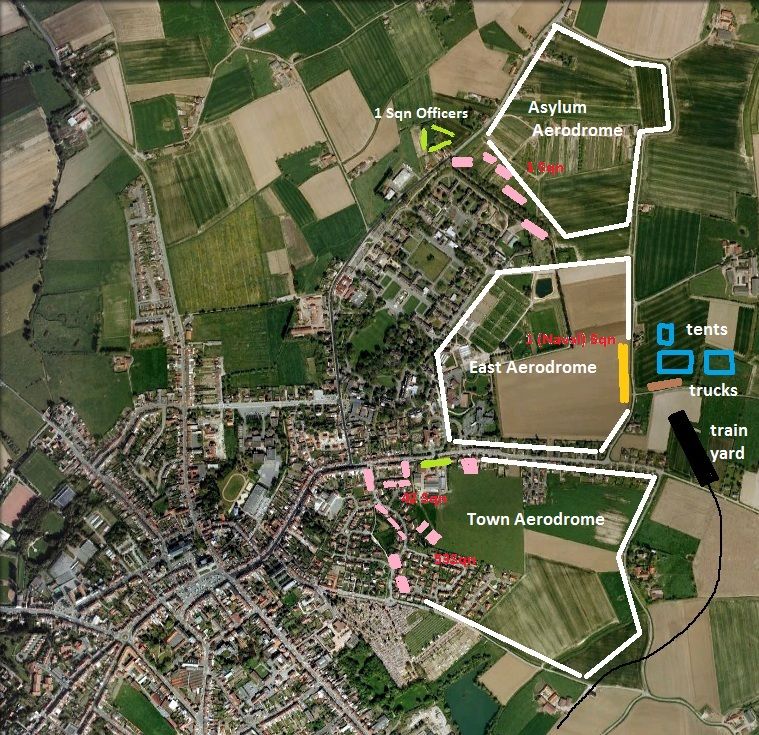 Overview of Bailleul and its 3 airstrips