Ballykelly airfield (also known as RAF Ballykelly and Shackleton Barracks, ICAO: EGQB)) was an airfield in the north of Northern Ireland.
Work on the airfield began in 1940 and it was opened on 1 June 1941 as an RAF station. No units were based at the airfield until December 1941. That month the Coastal Command Development Unit arrived at the airfield, but they left in June 1942. It remained a Coastal Command base however, although now with an operational mission. Long range maritime patrol Fortress bombers (RAF B-17 bombers) of 220 Sqn began using the airfield. On 21 July 1942 they were followed by 120 Sqn with Liberators. Both squadrons (and their detachments on Iceland) began their long range missions deep into the Atlantic hunting for U-boats. Both units moved to RAF Aldergrove in February 1943. For a while the airfield was used only by visiting Fleet Air Arm aircraft while disembarked from carriers.

a 120 sqn Liberator outside no 4 hanger Ballykelly Ballykelly before the 1943 runway extension

The East-West runway was extended to cross the railway line to Londonderry during 1943, so the the airfield could employ the Liberator to its maximum effect (with as much fuel and weapons as possible to provide max range and endurance). In September 1943 Liberators returned, this time with 86Sqn. They were replaced by 120 Sqn in September 1943. Along with 120 Sqn more Liberators arrived with 59Sqn. 120 Sqn disbanded at Ballykelly on 4 June 1945. In late August 281 Sqn arrived at the airfield. 59 Sqn moved off the airfield in September and 281 Sqn disbanded on 24 October. Left without units and a mission, Ballykelly was then put on care and maintenance.

In 1947 Ballykelly reopened and became the home of the Joint Anti-Submarine School (JASS), operating Shackleton MR1 and MR2. Five years later it became an operational airfield again when 269 Sqn reformed on 10 March with Shacketons. In June 240 Sqn followed. On 1 January 1954 204 Sqn was formed at Ballykelly. 240 was renumbered to 203 Sqn on 1 november 1958, and a month later 269 was renumbered 210 Sqn. There was also a station flight with two Lockheed Hudsons, two Douglas Dakotas and an Auster.
According to a message posted by John Clifton at AirfieldInformationExchange trains were still crossing the runway in the mid 1950s:
I can confirm that on the south wall inside the tower there was a polished wooden box the size of a wall clock.
On the outside was a dangling wooden handle, a spiral gong and a meter with one large needle which pointed to either "LINE CLEAR" or "LINE OCCUPIED".
There was a bell inside the case which rang when the railway wanted possession of the line and yes, unless there was an emergency, trains had priority.
The small signalbox by the side of the tracks was not normally manned but only used in fog or very bad weather.
Another thing was that aircrew signallers were fined if the plane landed with the trailing aerial still wound out.
This was because the (then steam) engine drivers did'nt like whirls of copper wire with lead weights on the end swishing round the cab sides.
As the engine drivers knew this could happen, it must have happened at least once! 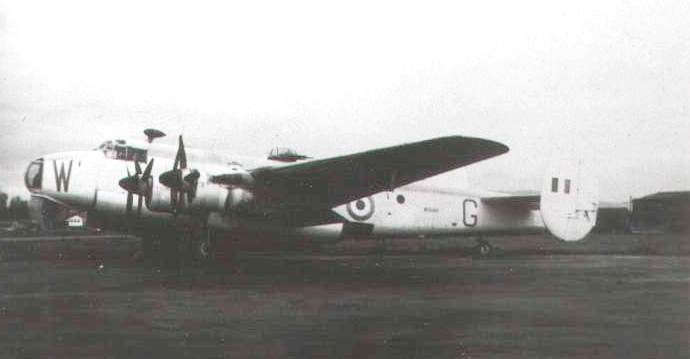 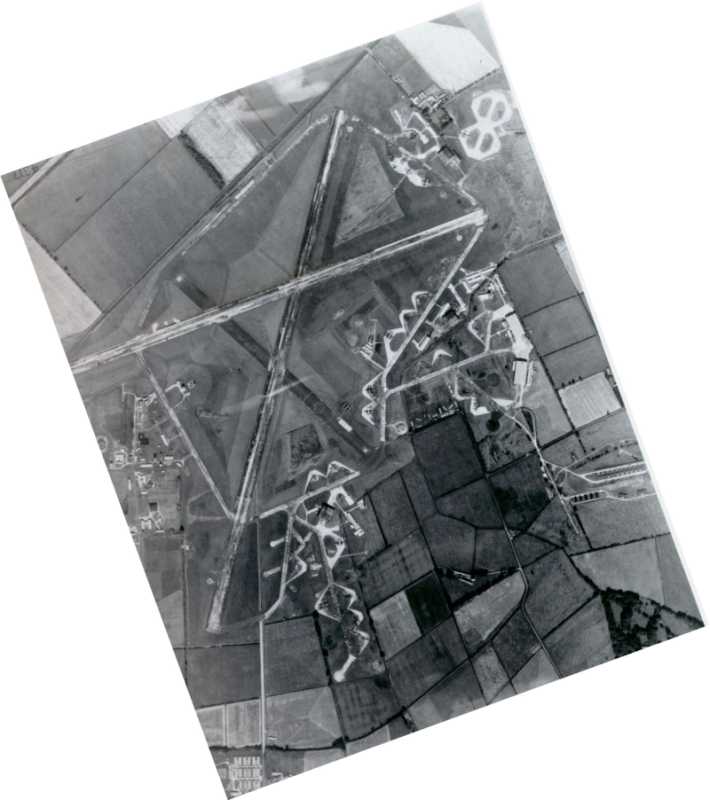 Overview of the airstrip in September 1958 (Second World War in Northern Ireland). 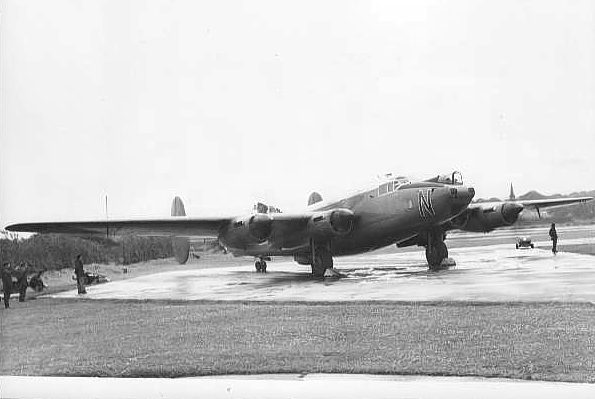 Shackleton WL751/N of 204 Squadron running up the engines beside the squadron dispersal somewhere between June 1960 and June 1961 (David Hill, via avroshackleton.com).

A train running over the Ballykelly runway (avroshackleton.com).

The JASS disbanded in March 1957. In 1957 and again in 1958, 240 Sqn was among the units involved in Operation Grapple, nuclear weapon testing on Christmas Island in the Pacific Ocean. The three squadrons worked side by side as part of the ASW (Anti-Submarine Warfare) force and covered search and rescue (SAR) standby duties. Some Fleet Air Arm units (such as 819 Sqn) moved onto the station in 1962, with the Royal Navy referring to it as HMS Sealion.
In 1963 the E-W runway was extended a second time to enable the V-bomber force to use the airfield as a dispersal site. On the eastern end's north side of the runway bomber dispersals were built immediately to the runway.
During a trans-atlantic yacht race in 1967/8 a French competitor was lost. By adopting search positions well before the expected search location, a Ballykelly Shackleton found him. They dropped some life preserving equipment and marked his position so he could be picked up by surface vessels. A few days later President De Gaulle visited Ballykelly to personally award medals to members of the crew.
In February 1969 203 Sqn moved to Malta. 210 Sqn left the base in November 1970 for the Persian Gulf. That left 204 Sqn alone at the base until its disbandment in March 1971.
Left without units and a mission again, RAF Ballykelly was to be closed and handed over to the British Army on 2 June 1972. For a while it was used for trails with the then-new Nimrods later in 1971, though. 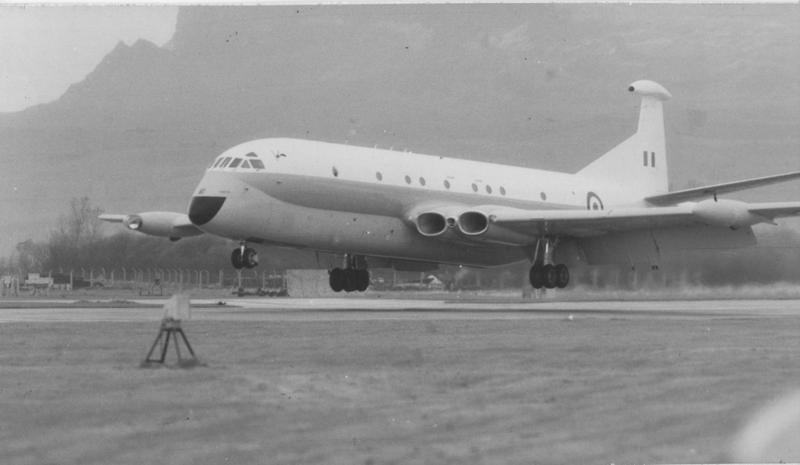 Nimrod (replacement for the Avro Shackleton) flight tests at RAF Ballykelly in 1971 (George Busby, via avroshackleton.com).

The handover to the Army did not mean the end of flying operations at the station however. It did mean a change in name, as the Army decided to rename it Shackleton Barracks, in honour of the Shackleton units that had operated at the airfield for 20 years. When the RAF left Ballykelly in 1971 there was no further use for the full length of the E-W runway. A much shorter runway was eventually laid out at about the middle of that runway to accommodate visiting Army Islander aircraft based at Aldergrove. The occasional visiting Hercules used the secondary runway (02/20), which had an approach over Lough Foyle. Army helicopters and Police helicopter also used the airfield from time to time.
On March 29, 2006, an Airbus A320 aircraft operated by Eirjet on behalf of Ryanair landed at Ballykelly after the pilot mistook the runway for that of nearby City of Derry Airport.
The Army pulled out of the airfield in 2008.
For a while it was still occasionally used by visiting army helicopters during exercises.
In 2010 the former base was sold by the MoD to Merrion Property Development, of Dublin, which renamed the place as Longview and refurbished it as a housing development.
Most of the base was still intact in 2011 though, as only the homes in the housing area had been sold to private persons. 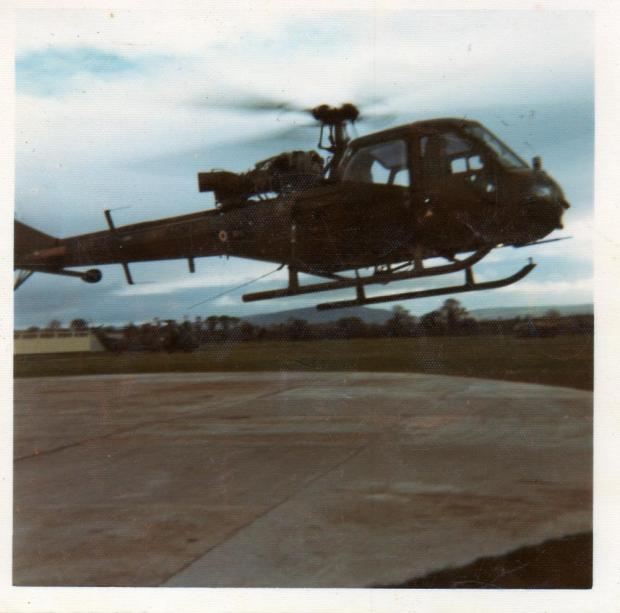 An Army Westland Scout at Ballykelly in 1973 (Arrse.co.uk). 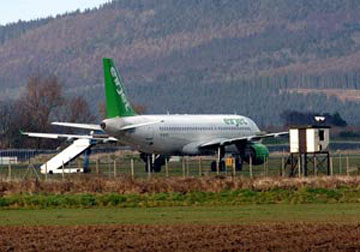 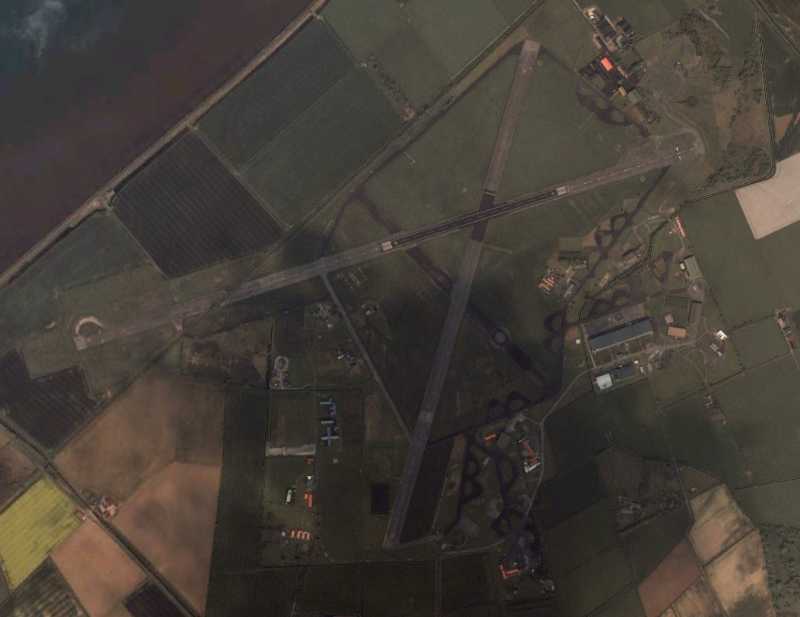 Aerial photo of the airfield in 2007, with the small airstrip painted on the former main runway (Google Earth) 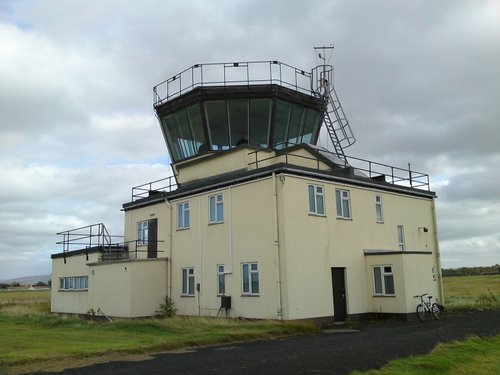 The Aircraft Control Tower at RAF Ballykelly/Shackleton Barracks in 2009 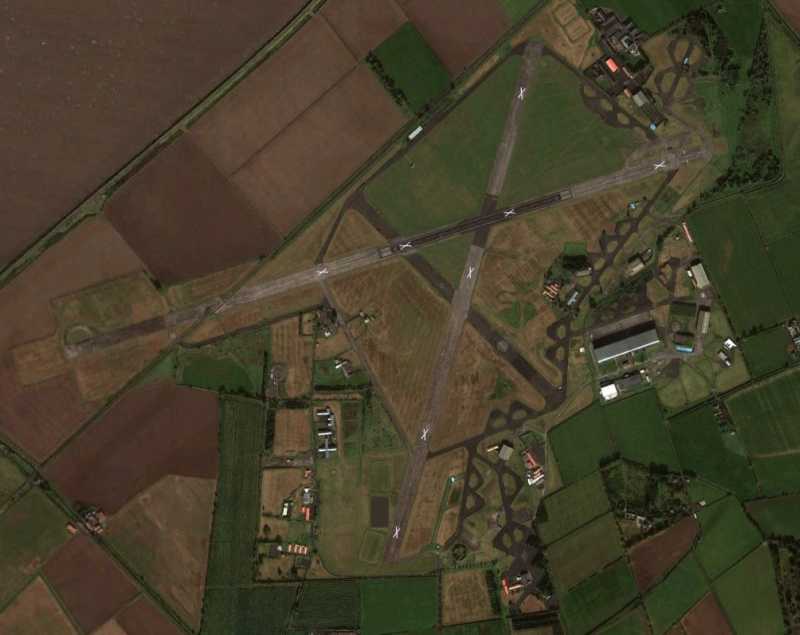 Ballykelly in 2009 when the airfield had just closed. Notice the large white X markings to indicate the closure of the airfield (Google Earth)