Barkarby airfield (swedish: Barkarby Flygstation, also known as Hägerstalunds flygfält, F8 Barkarby and Stockholm-Barkarby flygplats, ICAO ESKB) was an airfield 14 kilometers northwest of Stockholm.
The airfield was first mentioned as a flying ground for the Army Flying Corps (Arméns flygkår) in 1913.
During World War I the interest in aviation grew and during 1915-16 the field was used for early exercises and experimental flights. In 1917 the Swedish defense ordered 4 Fokker D-IV aircraft for the defense of Stockholm. When the war ended a year later the need seemed to have disappeared and the aircraft, still in their crates, disappeared into the mobilisation stores. After having been hardly ever used the aircraft were scrapped a few years later.
In 1919 a reserve officer started PO Flygkompani, which operated civilian passenger flights and a flight school, using two Avro 504K and a deHavilland DH6. Barkarby launched international services to Helsinki and Berlin that same year.
In the early 1920s the flights that had operated from a field in Ladugårdgärde were moved to Barkarby. The defense department moved back into the airfield in 1926. They used the airfield to test new aircraft types. A seperate flight was formed for staff officers that required to maintain flight skills. Their aircraft were assigned to the F6 Karlsborg flotilla.
Using a Junkers F13, ABA began experimental flights to London and Amsterdam in June 1928. The flight, carrying mail to London took 19 hours.
During Charles Lindbergh's visit to Sweden in 1933 he was given the opportunity to fly one of the Air Force Sk 10 at Barkarby. 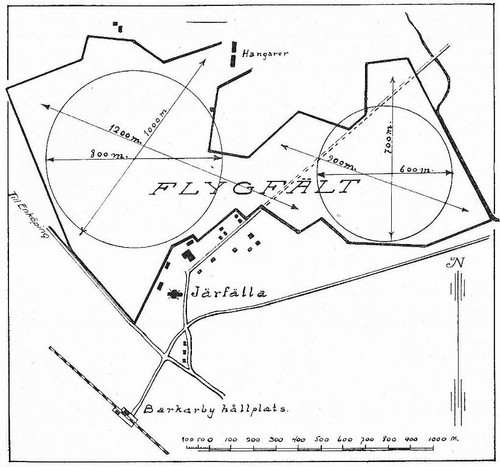 A map of Barkarby airfield from 1938, before F 8 moves into the field later that year (lae.blogg.se).

A defence whitepaper announced a decision to begin setting up new air bases all over Sweden. The airfield at Barkarby was an obvious candidate because the mililtary were already using it. By moveing civilian traffic to Bromma, enough room was to become available. The decision was made to assign the base a fighter flottilla for the defense of the skies over the capital. Buildings were erected in 1938, and an attachment of F1 Hässlö was to form the nucleus of the new unit, now called F8 Barkarby from 1 Oct 1938. The new flotilla proudly called itself Kungliga Svea flygflottilj (Royal Swedish Air Flotilla). The staff's flight department became the fourth division of F8 in 1938.
As most pilots who flew in this flight department were older officers and since they were the only ones who used a grass track in front of the hangar, this division was often called the "Gubbängen" flotilla (after a neighbouring property).
Barkarby became responsible for the establlishment and training of no less than 5 air bases: F2, F3, F4, F5 and F8. In 1939 F8 also became responsible for the establishment and organisation of F19 Finland. F19 -or the Swedish Volunteer Corps in Finland- was a Swedish volunteer unit that briefly appeared in Finland during the Finnish Winter War of 1940. It consisted of 5 Hawker Hart light bombers and twelve Gloster Gladiators, all provided by the Swedish government to aid the Fins. Aided by three privately funded transport aircraft they formed a force of about a third of a normal Swedish Air Force flotilla.

A second group of Gladiators was formed at Barkarby, but before they could be sent to Finland peace intervened. Although Swedish owned and registered, they wore Finnish nationality markings (The Finnish Swastika).

F8 went into World War II with the Gloster Gladiator biplanes, tasked to defend the neutrality of Sweden and bearing the Swedish designator J8. They were equipped with slightly more modern Seversky Republic EP-1 (J9) from the summer of 1940. The first years were -to say the least- hectic for the new single hunting flotilla. Fighter pilots had to be trained in the shortest possible time, often disrupted by the demands for preparedness and response to guard Sweden's neutrality. F8 was thus to become the nucleus of a strong Swedish fighter force and war experience taught them to be an essential link in their defense.
F8 was in the 1940s and 1950s Swedens largest air wing, with at its peak 126 aircraft of 11 different types and with the 300 pilots who flew there periodically. Barkarby was responsible for setting up 10 more flotillas in September 1944: F10, F12, F13, F14, F16, F17, F20 and F21.

Barkarby was also the home of a series of Elint aircraft operated by the Swedish Air Force. Initially two converted C-47/DC-3 (known locally as Tp79 'Hugin', SwAF s/n 79001 and 79002) took the role that had been flown by a single converted Ju86K (Tp73). 79002 disappeared over the Baltic and was possibly shot down by the Soviet Air Force. Both were replaced by two ex-RAF Canberras, known locally as Tp52 (s/n 52001 and 2), in 1960. Both aircraft were replaced by former SAS Caravelles after the unit had moved to F3 Malmö (Malmen). 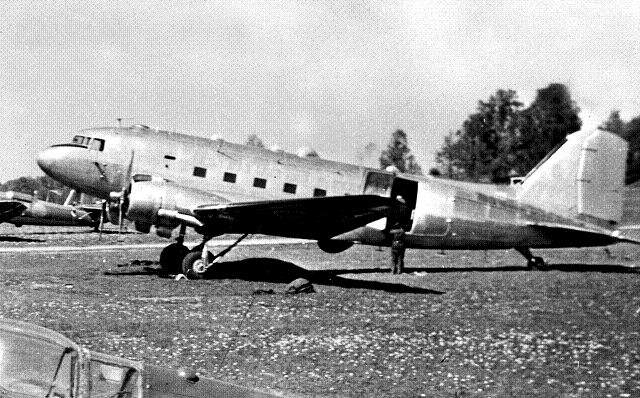 F8 became the first unit that imposed "STRIL60" systems, for modern air surveillance and command. In 1956 a Lockheed Constellation of Air France landed on the airfield. The surprised pilots thought that they were at Bromma.
F8 provided the men and equipment for the 1958 Lebanon mission. The flotilla was also the first in the country that were added with helicopters. Eventually F8 had the country's largest air defense unit with Bistrol "Bloodhound" missiles from England.
Between 1961 and 1963 F8 organised and established F 22 Congo, a.k.a. the UN Fighter Wing from elements of F10. In spite of many difficulties the eleven J29 Tunnans operated in Congo with distinction along Indian Air Force Canberras, and F-86 Sabres from Ethiopia, Iran and the Phillipines.
In 1962 the flotilla changed its name to Kungliga Svea flygkåri (Royal Swedish Flying Corps).
In 1974 all military operations at the airfield came to a halt. Although it remained military property, it opened entirely for civilian flight.

The Barkarby Flygklubb rented the airfield for decades from the millitary. It could only use about half the runway however. Over time the airfield was transferred from the military to Järfälla.
On 10 April 2007 the municipality of Järfälla decided that the lease for the airfield was to be terminated. The last flight on the field was allowed to take place on 31 December 2008. Conflicting opinions on the legal correctness of the decision led to a legal battle that was won by the municipality in 2009. In early 2010 severe restrictions were introduced, which no longer allowed private aircraft visiting Stockholm to land on Barkarby.
As of June 1, 2010, the airport is closed, even for aircraft previously stationed at Barkarby. In aerial photography construction can be seen creeping onto the airfield. 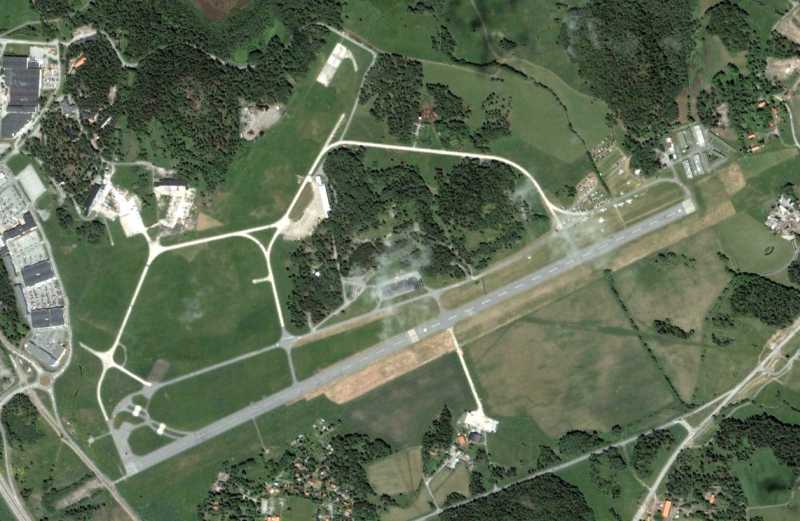 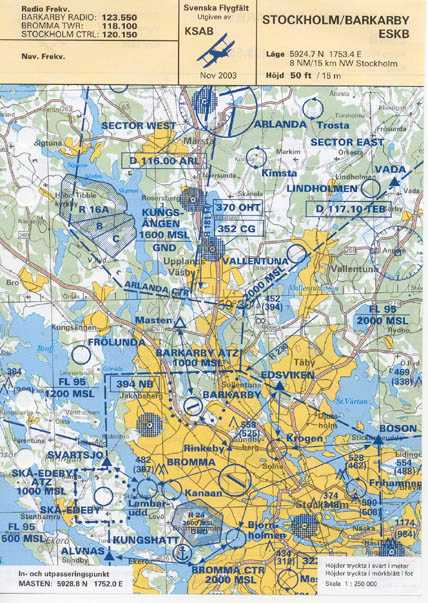 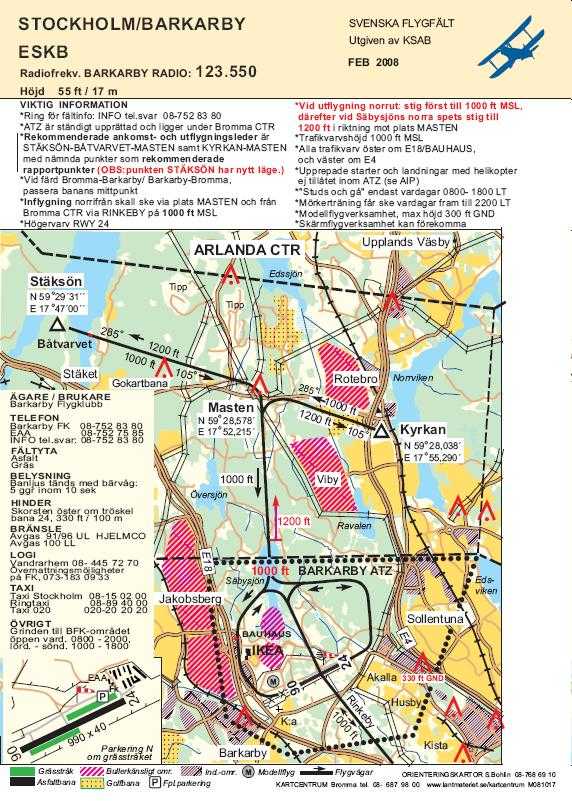 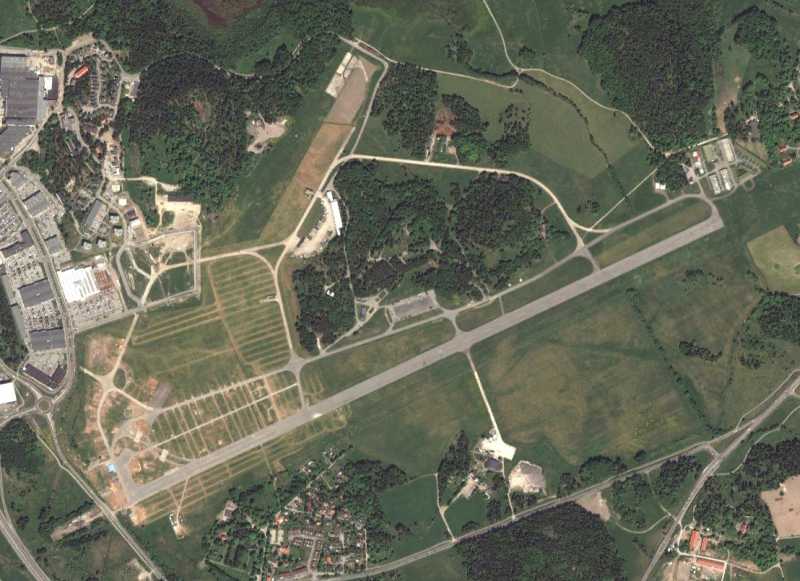 This view of Barkarby in June 2010 clearly shows construction creeping onto the airfield just after it closed. The lines in the grass are probably caused by new drainage (Google Earth) 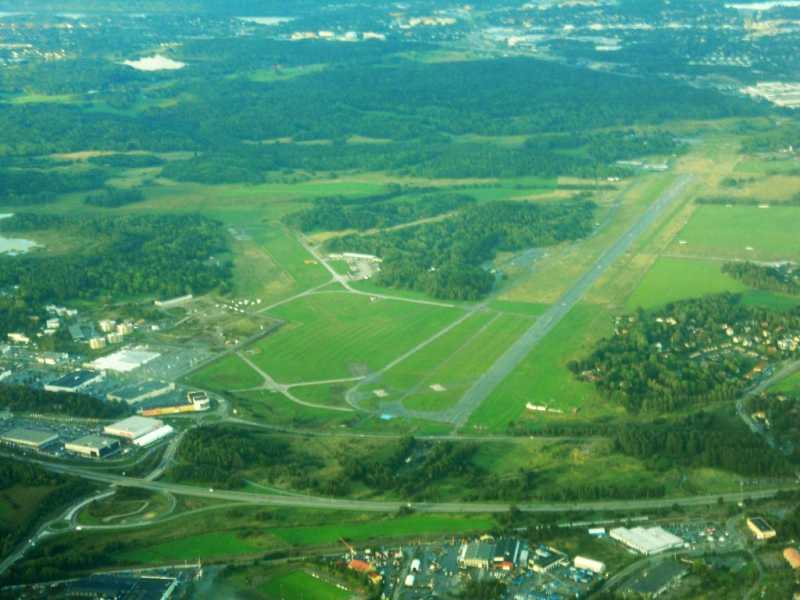 Barkarby in August 2010. Only faint traces of the drainage lines remained in the grass (Photo: Magnus Emanuelsson - via e-mail) 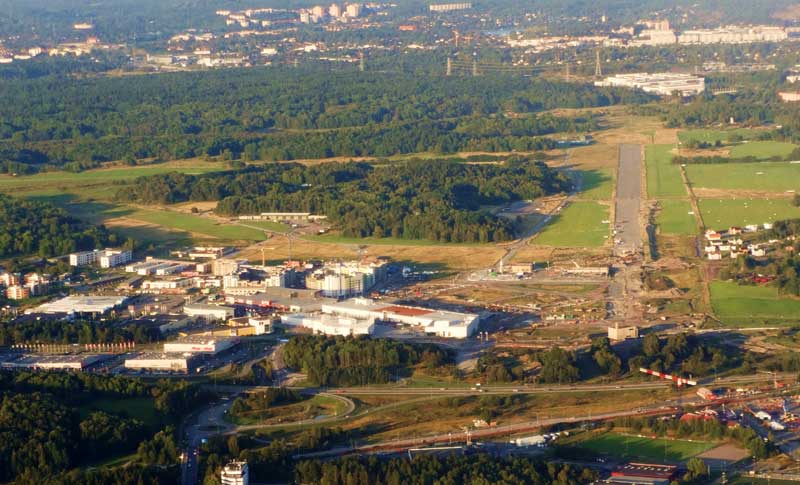 Barkarby in August 2014, by which time a lot of construction had been done (Photo: Magnus Emanuelsson - via e-mail). 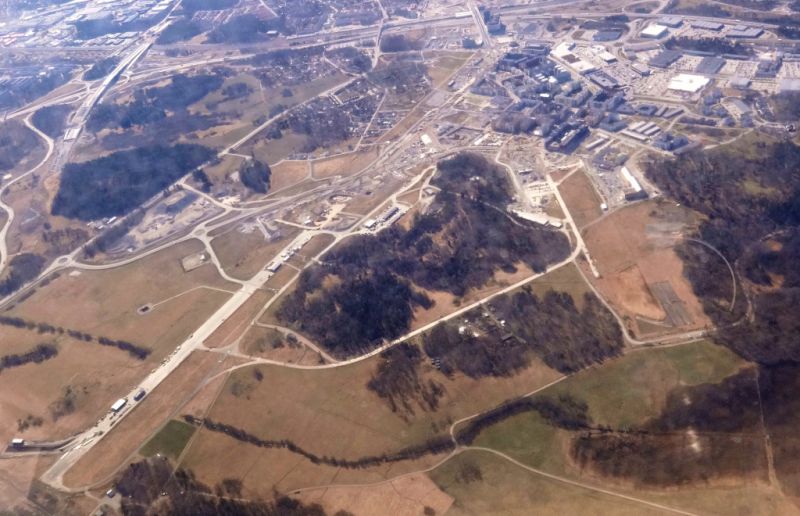 Barkarby as photographed on 25 April 2022 by Magnus Emanuelsson. Although the runway is still recognisable, the expansion of Stockholm is still steadily growing.