Basepohl airfield (German: Flugplatz Basepohl, also known as Basepohl/Stavenhagen) was a helicopter base 140 kilometer north of Berlin.
It was a helicopter base with 72 helicopter standings, several hangars, platforms and taxiways, planned for a Nationale Volksarmee combat helicopter wing in 1973 and completed in November 1975. It was taken into service on 25 November 1975, when two Mil Mi-2 (NATO: Hoplite) and four Mil Mi-8T (NATO: Hip) of Hubschraubergeschwader-54 (HG-54, or Helicopter Wing 54) arrived from Brandenburg Briest. Construction at the airfield continued as barracks and homes for the families of the Wing were built nearby. By December 1975 the unit possessed 21 Mi-2 and 4 Mi-8T helicopters at the new airfield.
As the NVA did not yet own any combat helicopters, the units helicopters were retrofitted with machineguns and rockets.

In 1977 Helicopter Wing (Hubschraubergeschwader) HG-54 received the first 18 Mi-8TB combat helicopters. As the first unit of the Warsaw Pact outside the Sovjet Union the Geschwader received four examples of the modern Mi-24D 'Hind' in May 1978. The first flight of a Mi-24D took place on 4 July 1978 at Basepohl.
On 1 December 1981 HG-54 was renamed to Kampfhubschraubergeschwader 57 (Combat Helicopter Wing KHG-57). On 12 June 1982 KHG-57 and 'sister'-Geschwader KHG-67 were brought under the command of FO FAFK (Führungsorgan der Front- und Armeefliegerkräfte) of the Luftstreitkräfte/Luftverteidigung (Air Forces/Air Defense). With the change in command, KHG-57 was included in the East-German Air Defense system. For this reason, a single Mi-24D was stationed throughout the year at the site of the Funktechnischen Kompanie (FuTK) 432 in Groß Molzahn. Between April until October the sites of FuTK 614 in Altensalzwedel (one Mi-24D) and FuTK 613 in Athenstedt (ein Mi-8TB) also served in this role.
On 14 November 1984, KHG-57 was, together with KHG-67, directly placed under command of Militärbezirk V (Military Region V), located at Neubrandenburg, modelled after the Red Army doctrine.
On 15 July 1986 a Mi-24 simulator was introduced for training.
On 1 december 1986, the unit was renamed Kampfhubschraubergeschwader 5. By this time, the unit had 13 Mi-18TB and 20 Mi-24D on strength. As the only unit in the NVA, KHG-5 received 12 Mi-24P at the end of 1989, of which the first was flown to Basepohl on 15 December. 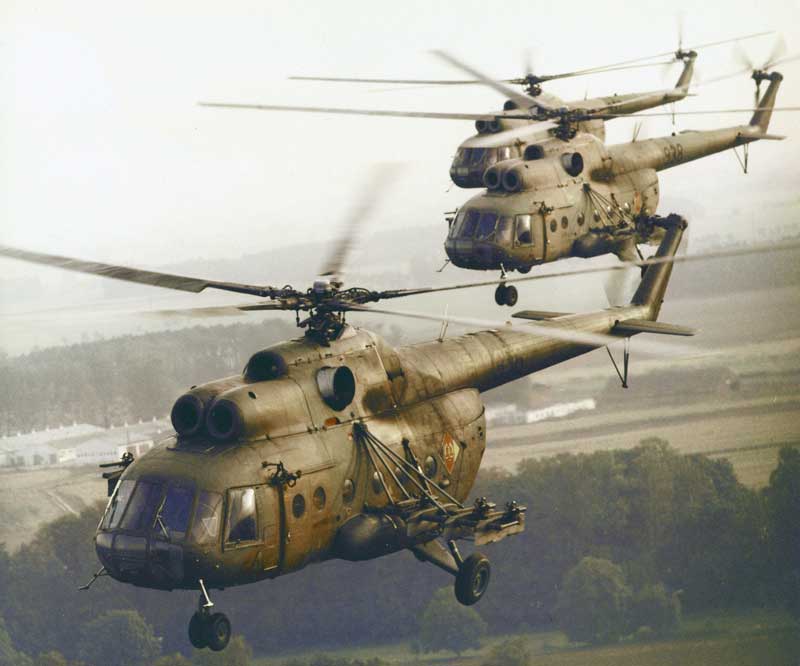 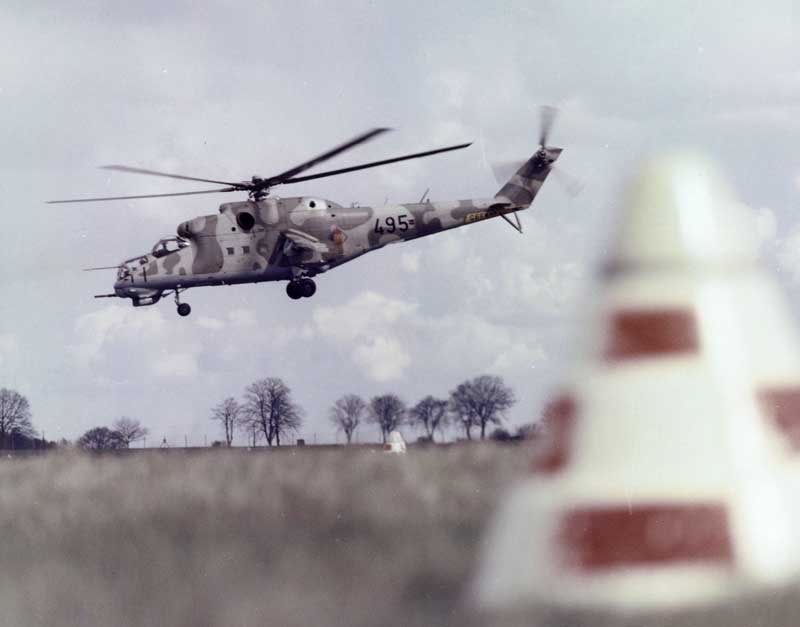 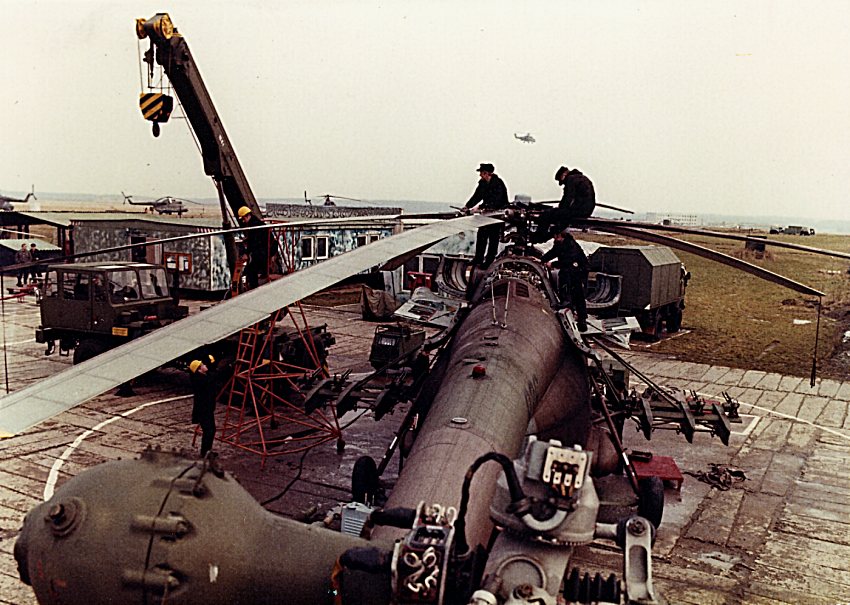 Maintenance on an Mi-8TB being performed at Basepohl, ca. 1981/1982, with a Mi-24D 'Hind' combat helicopter taking off in the background (snafu.de)
As a result of the political developments, KHG-5 was disbanded in March 1991 and taken into the Bundeswehr as Heeresfliegerstaffel 80 (HFlgStff 80). The available Mi-8 were demilitarised and four former Mi-8TB were used for SAR and Air Rescue tasks from April 1990, designated as Mi-8B. Their Mi-24s were only sporadically flown and withdrawn on 3 July 1992. Two Mi-24D and Mi-24P each were tested at WTD 61 and one was given to the US Army for evaluation. On 14 September 1994 the last flight of HFlgStff 80 took place, and shortly after that, the Basepohl support unit was abandoned.

The airfield remained abandoned and untouched for the next 18 years. In 2012 a photovoltaic powerplant was buitl at the site. 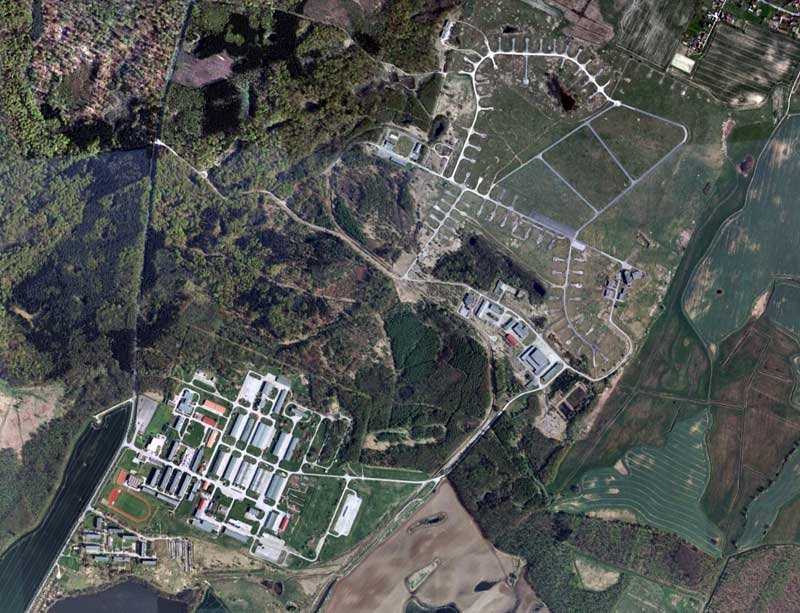 Overview of Basepohl in 2008, with clearly recognisable its helicopter platforms and hangars. On the lower left we can see the former basing and logistics area (Google Earth) 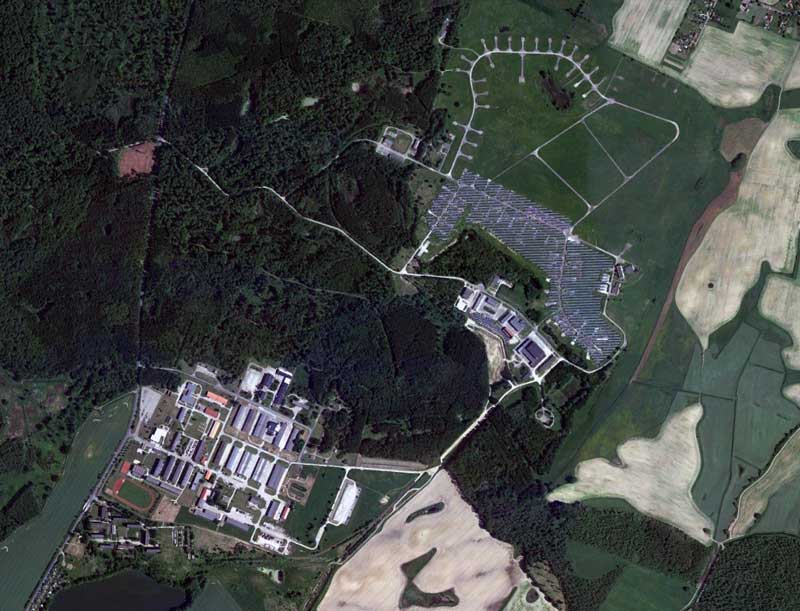 2012 pghoto of Basepohl with clearly visible the photovoltaic powerplant that is now covering about half the airfield site. The hangars remain untouched however.
contact us about this airfield