Airfield Bazenville (Advanced Landing Ground B-2 Bazenville or B-2 Crépon) was an Allied wartime airfield in Normandy, France.
The airfield was built by the Royal Engineers 16th Airfield Construction Group together with the RAF's 3207 and 3209 Servicing Commandos starting just after midnight after D-Day. The groups built a runway, dispersal areas, communications facilities, landing lights and many other requirements to run an airfield. It was located between the villages of Crépon, Bazenville and Villiers-le-Sec.
ALG B-2 would have been completed as the first ALG in Normandy on 9 June, but a B-24 Liberator crashlanded at the uncompleted airfield that morning and ripped up a lot of SMT. Instead it was completed two days later, on June 11, and serviced the first 36 aircraft (Spitfires) of 127 Wing that same day. The complete Wing (403, 416, 421 and 443 Sqns) moved in on 16 June 1944. Despite being a temporary airfield, its facilities were those of a full air base, with dispersals all around the airstrip. A fuel and ammunition dump was located south of the airfield. Rows of tents housing nearly 1000 men were located in orchards to the southeast. A local church is believed to have served as Ground Control for the entire Normandy 2TAF area of responsibility. The airfield was located only 7 kilometers (4 miles) from the Normandy beaches, and when it opened the frontline was only 9 kilometers (5 miles) away. Over the first month of its existence the frontline only moved to 19 kilometers (11 miles) away. While 127 Wing operated from the airfield it was also used to evacuate thousands of injured soldiers, sailors and airmen to England. In addition a constant stream of other Allied squadrons used the airfield for fuel, ammunition or repair.

Hawker Typhoon pilots of 121 and 124 Wings discuss operations at Bazenville, Normandy, on the evening of 14 June 1944. In the foreground, standing on the left, are five pilots of 175 Sqn RAF, including the Commanding Officer, Squadron Leader M R Ingle-Finch (fourth from left): on the right stand members of 181 Sqn RAF with their commander, Squadron Leader C D 'Kit' North-Lewis sitting on the far right. In the farthest group, those identified include Wing Commander C L Green (wearing helmet) leader of 121 Wing, and Squadron Leader W Pitt-Brown, commander of 174 Sqn RAF (on the right, wearing a lanyard). In the background, Supermarine Spitfire Mk IXs of 66 Sqn RAF stand at their dispersal points.
(Royal Air Force, 2nd Tactical Air Force, 1943-1945 © IWM (CL 151))

The RAF's top scoring fighter pilot flying in north west Europe, Wing Commander James E. 'Johnny' Johnson, seen on 31 July 1944 at Bazenville with his pet Labrador dog 'Sally'. He recorded 38 victories, though at the time of the photograph his total was 35. He commanded No 127 Wing composed of three Canadian Spitfire squadrons. The decorations on his tunic are a DSO with two Bars and a DFC with one Bar (Royal Air Force, 2nd Tactical Air Force, 1943-1945 © IWM (TR 2145))

Bazenville was used until 28 August 1944. The lands were then returned to their respective owners. Today, nothing remains of the former airfield. The lands have been converted back to agricultural use. In front of the Bazenville church stands a memorial to the airfield and those who fought there: a Spitfire wing shaped statue with inscriptions. 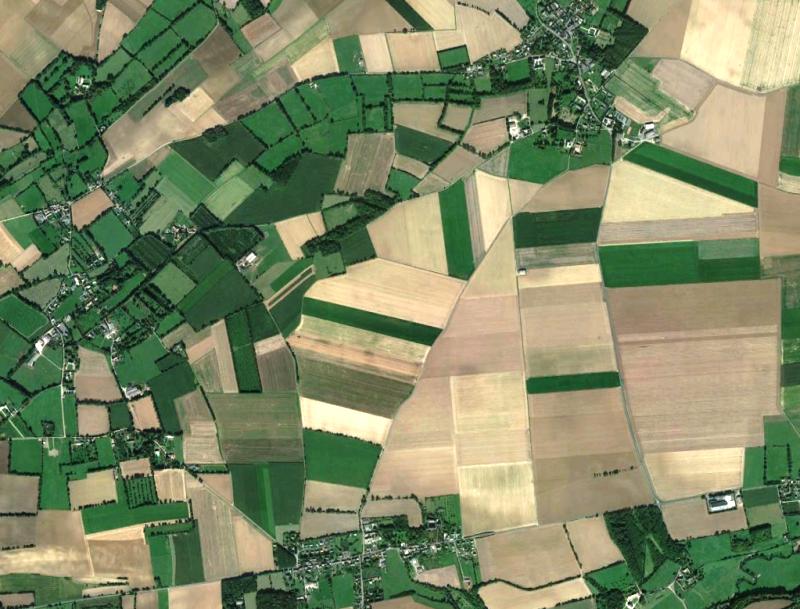 B-2 Bazenville in 2015, nothing remains of the airfield (Google Earth)