The former airport Berlin-Johannisthal (German: ehemaliger Flugplatz Berlin-Johanisthal) was opened in 1909 as one of the very first (if not the first) civilian airports in Germany.
At the time it was known as "Motorflugplatz Johannistal-Adlershof" because it was located exactly on the community border between Johannisthal and Adlershof. The airfield at Johannisthal was built because at the time the German Generality would not allow motorized flight at the exercise grounds at Tempelhof, because of the airships that operated from Tempelhof. Regardless, on 27 September 1909, British Hubert Latham started his Antoinette-monoplane at Tempelhof and flew at about 100 meters altitude and in 15 minutes time to Johannisthal. The flight became Germany's first overland flight.
Johannistal-Adlershof soon attracted a wild mix of adventurers and pioneers. From 1910 it became home to well known aviation companies. Companies like "Fokker Aeroplanbau", "Albatros Werke AG", "Luft-Verkehrs-Gesellschaft AG" (LVG), "E. Rumpler Luftfahrzeugbau GmbH", "Flugmaschine-Wright-Gesellschaft mbH" settled and became world famous. The first airship hangar (for the Parseval company) was erected in April 1910.
The airfield was home to the Kaiserlichen (Imperial) Aero-Club. Around the airfield stands were built (one for 2300 and a second for 1750 people) to allow spectators a good view of the new art of flight. In spite of financial difficulties, the airfield became an internationally renowned attraction. Just between 1911 and 1913 the number of flying hours increased tenfold from just 20 to over 200 hours. The airfield became the starting point for the first Deutschlandflug, a flight around Germany, on 11 June 1911.
A second airship hangar (the Zeppelin-Halle) was completed in September/October 1911. The hangar was used by the German Imperial Navy for their airships. With the outbreak of World War I the aviation industry became militarised. 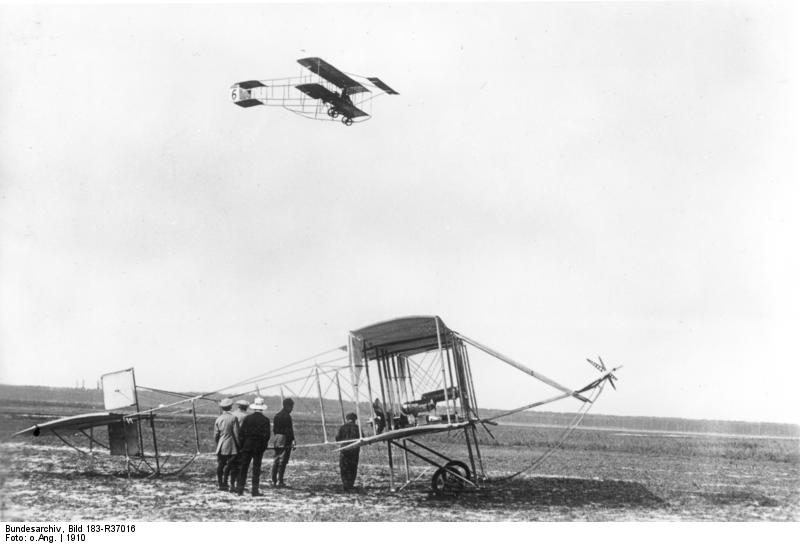 Berlin-Johannisthal 1910: Robert Fey on his Farman III in flight and on the ground is Amerigo with his Sommer plane before the start (Deutsches Bundesarchiv (German Federal Archive), via Wikimedia). 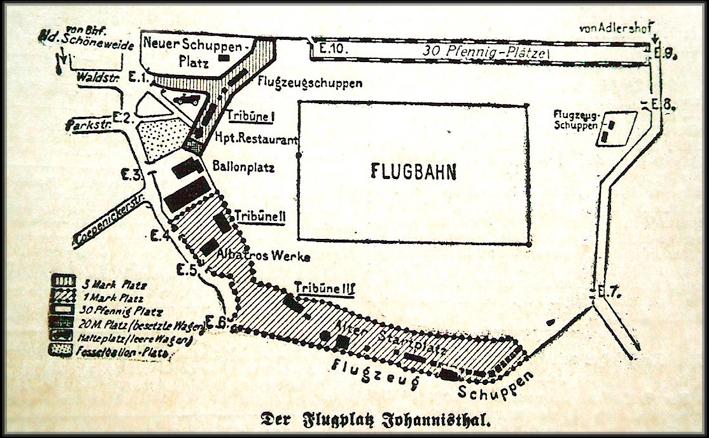 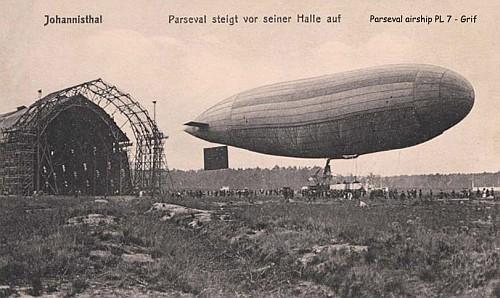 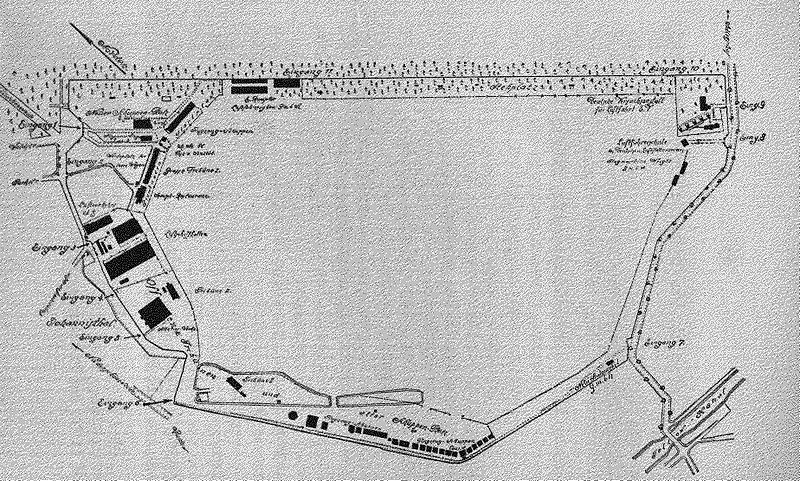 Map of Flugplatz Berlin-Johannisthal, before 1913 (Wikipedia.org). 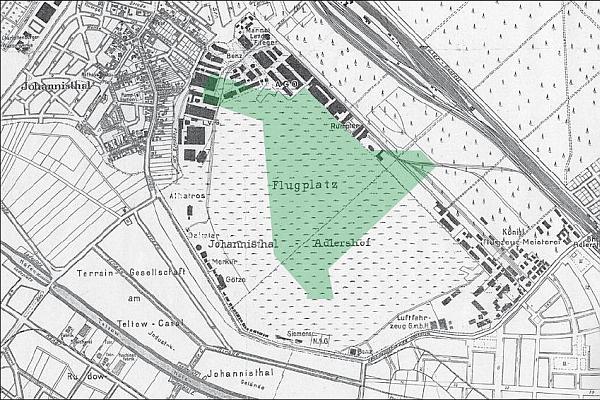 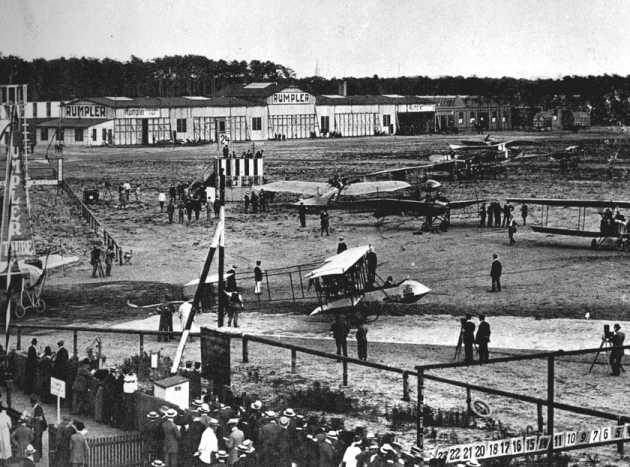 Start of the "Rund um Berlin" (Around Berlin) race at Berlin-Johannisthal, 30 September 1913 (luftfahrtarchiv.eu). 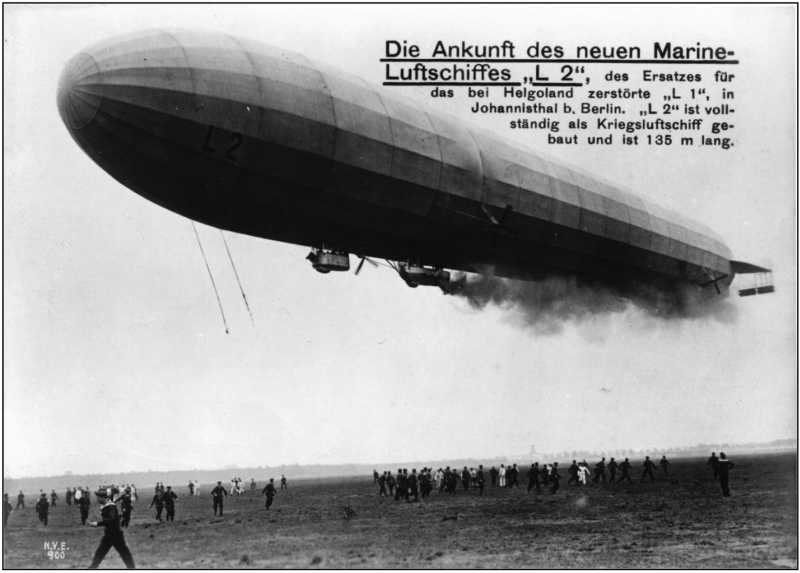 Built at Luftschiff Zeppelin at Lake Constance as LZ18, German Imperial Navy airship L2 arrives at Berlin Johannisthal for the first time on 20 September 1913, 18:08. L2 replaced L1, which was destroyed in a storm near Helgoland. L2 was built as a combat airship from the start, measuring 135 meters in length. To the people of Berlin, she was known as "Zigarre" (Cigar). On 17 October 1913, On the day she was handed over to the Kaiserliche Marine, L2 crashed when one of her Maybach engines exploded while she was still over the airfield. 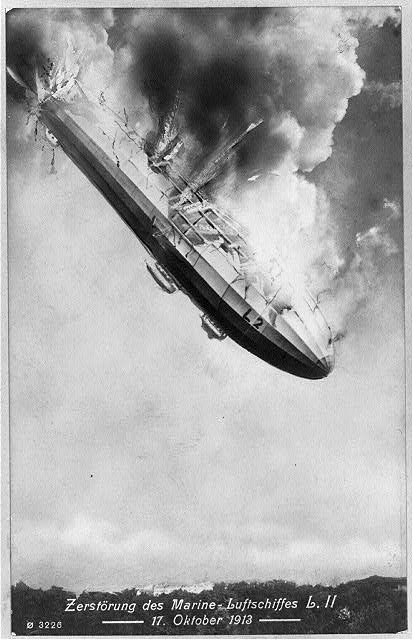 The crash of L2 at Flugplatz Berlin-Johannisthal, on 17 October 1913. The crash killed all 28 on board, making the Johannisthal Air Disaster one of the first multiple-fatality air disasters in history. This accident occurred a little over a month after the Helgoland Island Air Disaster. The two incidents were a major blow to German naval aviation. 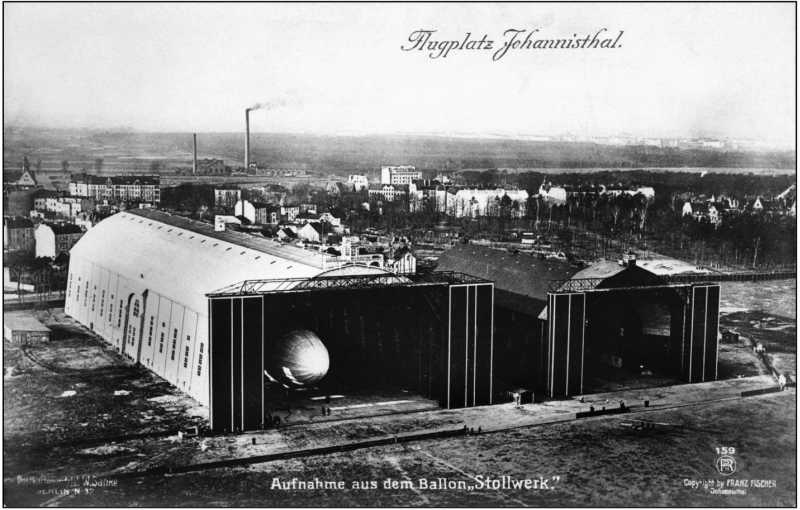 Undated photo of the two airship hangars at Berlin-Johannisthal. The smaller Parseval hangar (on the right) burned down on 10 October 1915

On 5 February 1919 Berlin Johannisthal became the birthplace of civilian air mail in Germany. From this day a twice daily mail service was started to Weimar by the Deutschen Luft Reederei (German Air Shipping). It brought mail, mostly newspapers, to the Nationalversammlung (German National Assembly). However, after the opening of Tempelhof in 1923 the use of the airfield deminished sharply.
A group called 'die Alte Adler' (the Old Eagles), consisting of the adventurers and entrepeneurs of the previous decade, tried to revive the airfield. They argued it would be a disgrace to house the Deutschen Versuchsanstalt für Luftfart - DVL (German Research Agency for Aviation) anywhere but at Johannisthal. They succeeded in attracting the DVL to Johannistal. Actual flying however, was prohibited by the Berlin Magistrate from 1931, in spite of a successful flying day in August 1930.
During National Socialist rule the DVL became an important test installation for the secret outfitting of the Wehrmacht (specifically the Luftwaffe). 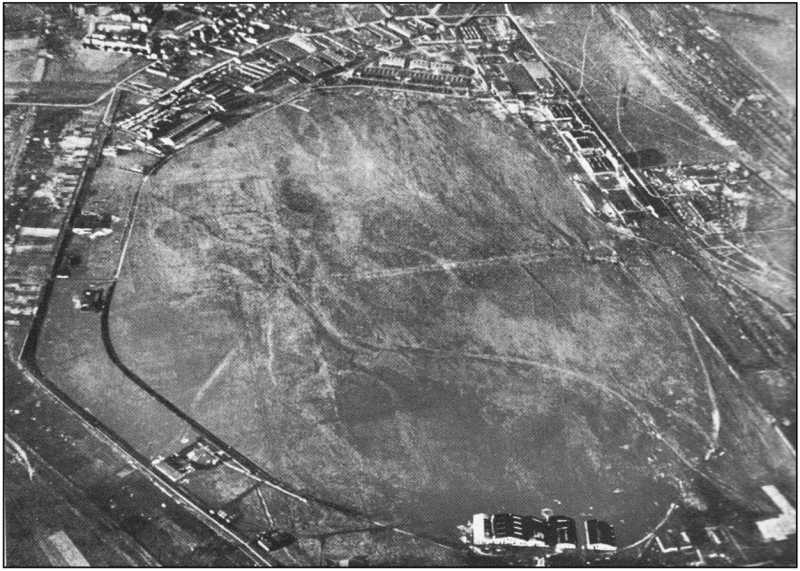 After World War II it was used for about a year by the Soviets, until Berlin Schönefeld was opened. The larger Schönefeld became, the less aviation related activity remained at Johannisthal. 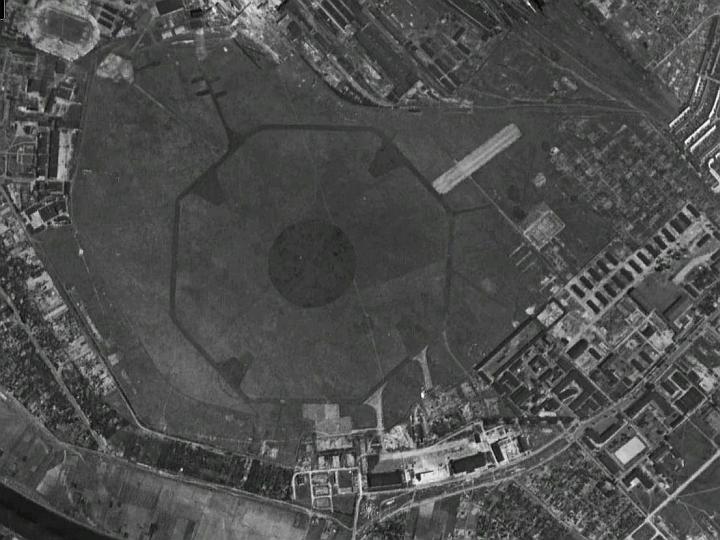 Johannisthal, now renamed Adlershof and right next to the Berlin Wall, became a university and research center. It created things like the first birth-control pills and the spectral camera for the Soviet Soyuz-22, for instance. Ultimately half the scientific research in East Germany took place at Johannisthal/Adlershof. East German television used the hangars as televisionstudios. Border Guards of the former East German state used part of the complex as a barracks until 1990. Although it had fallen into disuse long before (in 1952 all operations came to a halt), the airfield was finally officially closed on 9 September 1995. 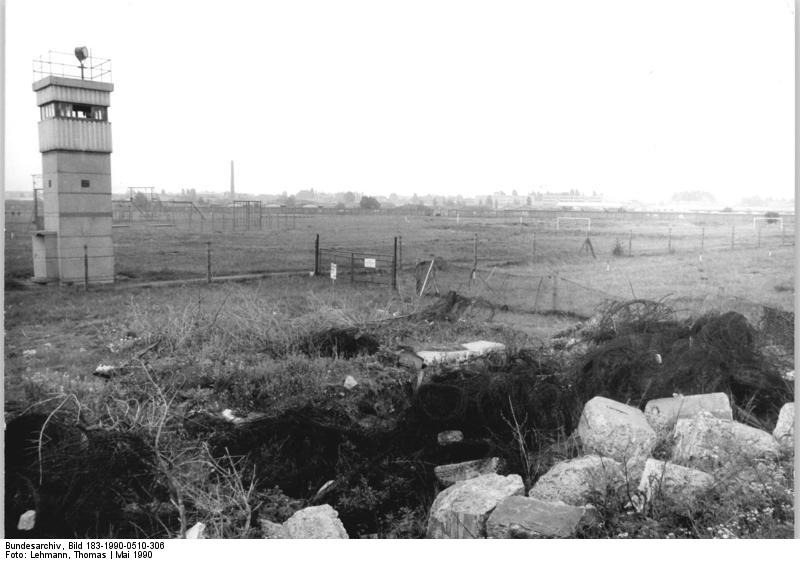 Today the area is still recognisable from the air, and some facilities (although put to new use) remain recognisable. Most of the terrain has been turned into a city park (Europapark), but part has been redeveloped into the Aerodynamic Park, part of the Humbolt University. Buildings of the former DLV have been restored, both as a reminder of its history and for architectonical reasons. 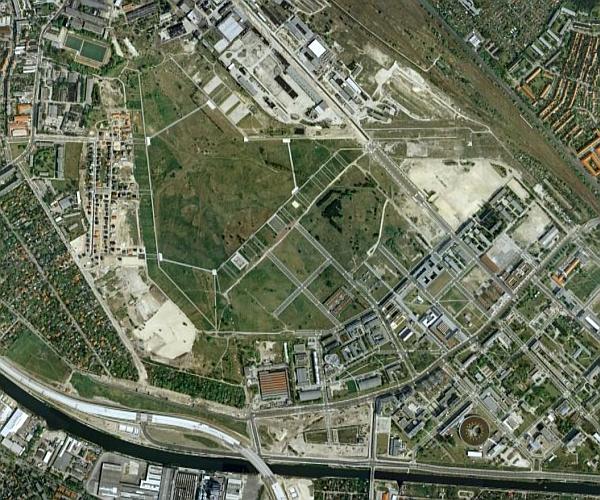 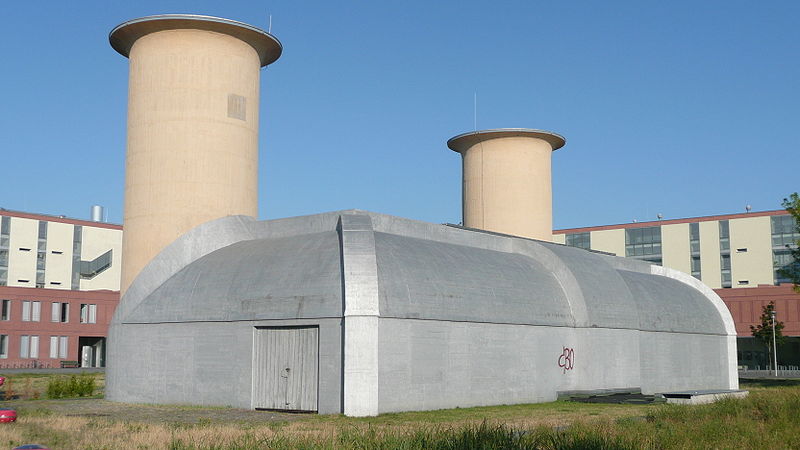 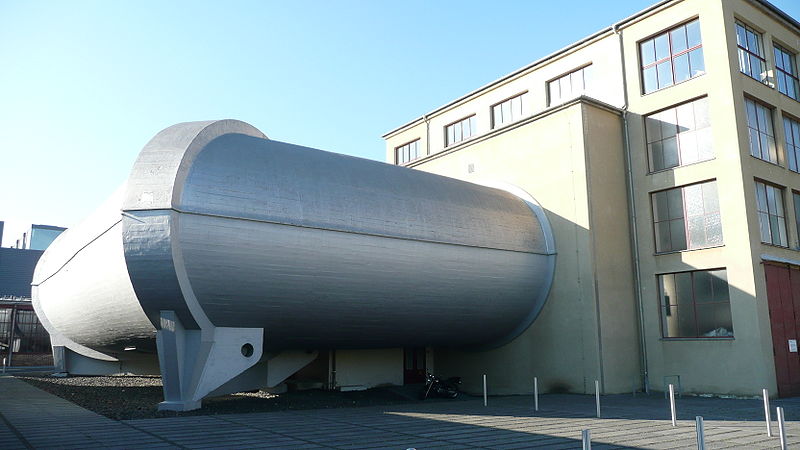