Air field Beuzeville (ALG A-6 Beuzeville, also known as La Londe) was an Advanced Landing Ground near Utah Beach in Normandy, France.
The airfield was built just outside Ste-Mère-Église by IX Engineering Command, 819th Engineer Aviation Battallion. It was declared operational on 14 June, 8 days after D-Day, and served as the first airfield on the beachhead.
Combat units stationed at the airfield were 371FG (404,405 and 406FS, flying P-47 Thunderbolts) and 367FG (392,393 and 394FS, flying P-38 Lightnings). The airfield was in operational use from 15 June 1944 until 18 September 1944. Its flying units flew close air support and air defense missions above and just in front of the front line.
According to the IX Engineer Command website the airstrip was released back to its owners on 18 September. 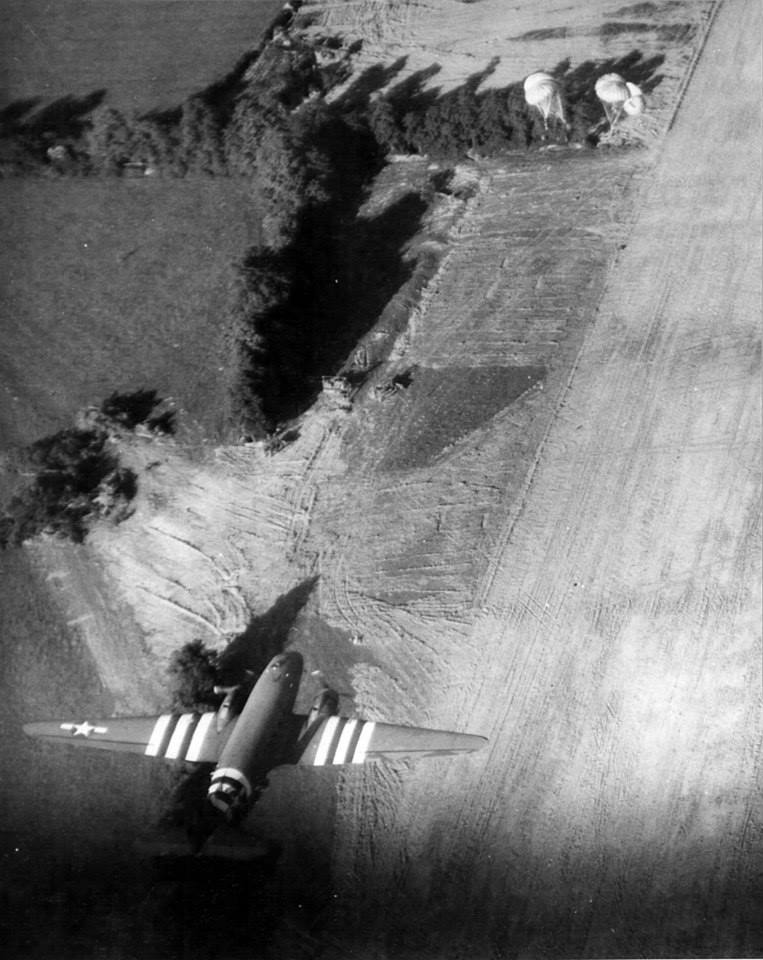 A IX TCC C-47 flies over ALG A-6 which is in the process of being constructed. You can see a couple of bulldozers by the tree line. Parachutes deployed in the upper portion of the photograph indicate that an earlier C-47 had just flown over the ALG. This picture was taken on 12 June 1944 during a resupply mission made by nine planes of the 436th TCG which dropped 2 tons of 60mm and 81mm mortars and 5 tons of ammunitions stowed in 54 parapacks and 25 bundles. (Honouring IX Troop Carriere Command on Facebook) A rare photo of CG-4A Waco gliders landing at A-6. The gliders carried the coils of SMT tracks that were used to reinforce the runway of the airfield, some of which can already be seen on the edge of the runway. When used for runways about 10 square meters could be installed per man per hour. In one week a 1200m runway could be installed, and in 10 days a 1700m runway would be completed. In this photo no SMT is yet seen installed, or the Waco would have crashed while 'biting' itself into the mesh. The presence of the coils sets the date of the photo shortly after above photo, taken on 12 June 1944, where they were not present yet. Some 2560 rolls of SMTs were needed to complete the temporary airfield, a load of 740 tonnes (PhotosNormandie, on Flickr). 819 EAB installling SMT at ALG-6. Dated 14 June, this photo holds several interesting details. Two aircraft are parked 'with their noses in the hedge' on the left side of the photo: a P-47D 'Razorback' Thunderbolt and a Spitfire laying on its belly with its wooden propellor broken. On the right side another Spitfire (Vb) is visible, coded 4G, 4O or 4Q. These are probably Spitfires (or Seafires) that were loaned to the provisional VCS-7 Air Spotting Pool of the United States to observe and adjust naval artillery. The aircraft are wearing their full invasion stripes and were likely unable to reach England, causing them to divert to this airfield (PhotosNormandie, on Flickr). When work began on 7 June, 819 EAB counted 50 men working on the airfield. When a firefight broke out between German defenders and US paratroopers, 7 workers were kiled. The photo lists a date of 17 June, the date the image was taken, but also the date the 371FG began flying into the airfield. To the left two Wacos are still parked (PhotosNormandie, on Flickr). A P-47 crashed and burned at ALG A-6 on 21 June, only a few days after the station opened. A GI is trying to put down the flames. The crash must have occured on takeoff as the anti-personnel mines are stil hanging under the wings, and the engine was running because the blades are twisted. This picture is shown on the cover of the book 'Shot to Hell: Stories and the Photos of Ravaged WWII Warbirds' (Paperback) by author Cory Graff (PhotosNormandie, on Flickr). 9th Air Force mechanics refill the compartments for the 4 12.7 machine guns on the left side of a Republic P-47 Thunderbolt. In the rear three 'Razorback' Thunderbolts are visible and another one to the left. Although it is not clear on which ALG this photo was taken, it gives a good impression of conditions at the ALGs (PhotosNormandie, on Flickr). Offloading of jerrycans with fuel at ALG A-6. Visible are three GMC trucks, a DUKW and a C-47 Skytrain/Dakota in the back (PhotosNormandie, on Flickr). 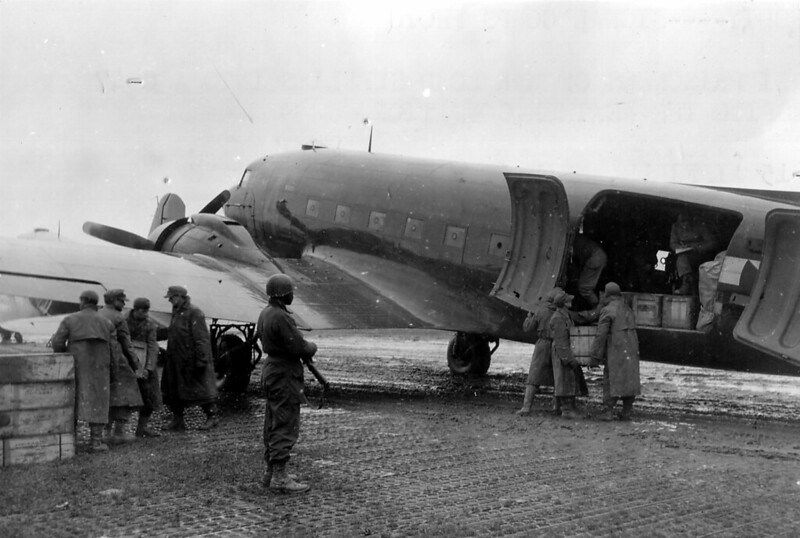 German prisoners unloading crates off a C-47 under the supervision of an armed black GI on a rainy airfield. The ground is covered with plates PSP (Pierced Steel Planking) instead of SMT, the C-47 in the foreground with the code L4 is part of the 91st TCS/439th TCG/50th TCW /IX Troop Carrier Command and it does not carry the invasion stripes. The original caption indicates the location as Sainte Mère Eglise (just south of ALG A-6), however. likely the official USAAF caption is completely wrong! (PhotosNormandie, on Flickr). 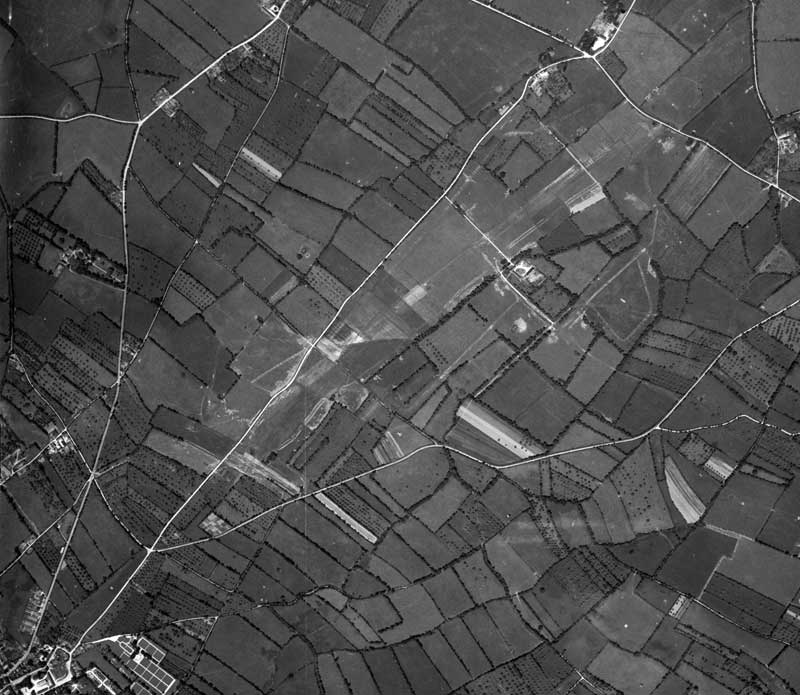 The remains of A-6 Beuzeville airfield were still recognisable from aerial photography in the summer of 1947 (IGN).

Today, nothing remains of the former landing ground. After 18 September 1944 the lands were brought back to their original state, as farmland. Only a small memorial reminds of the once very important airfield.