Bodney was built in 1939 and completed in 1940 as a satellite field for RAF Watton. The airfield was grass-surfaced with a hard surface perimeter track.
Initially it was used by aircraft of 21 Sqn. and 82 Sqn. of Bomber Command's 2 Group. They were not stationed at the airfield, but frequently dispersed here from Watton. From Bodney, the squadrons carried out operations over France and later the Netherlands and even Norway. On occasion, their Bristol Blenheim IVs were joined by 90 Sqn. who were evaluating the new Boeing Fortress Mk.I (B-17C), and by some 61 Sqn. Handley Page Hampdens doing mining operations in May 1941. 90 Sqn suffered heavy casualties however, and so the use of the Fortress I was discontinued. By October 1942, the 21 Sqn. Blenheims had been changed by Lockheed Venturas, but the squadron moved to RAF Methwold before the Venturas became operational. Although an active airfield, RAF Bodney was generally underused during this period.
In 1943 it was decided that Bodney would be turned over to the USAAF, who assigned the designation Station 141. The field was then prepared for the use by Eighth Air Force fighters. Improvements to the field included the addition of steel matting on the runway and pierced-steel planking hardstands for use by the American fighters and extra taxiways and roads laid down in macadam and concrete.
The airfield reopened in May 1943 and was used by the 352nd Fighter Group of United States Army Air Forces Eighth Air Force. The group was under command of the 67th Fighter Wing of the VIII Fighter Command.
The group consisted of three squadrons:
328th Fighter Squadron (coded PE)
486th Fighter Squadron (coded PZ)
487th Fighter Squadron (coded HO)
The 352nd began to arrive at Bodney during June 1943 from Republic Auxiliary Air Field New York and began combat operations in July, but the group was not fully operational until September. Until they received drop tanks, the missions were largely limited to the Dutch coast using their Republic P-47D Thunderbolts. The group flew numerous escort missions to cover bombers that were attacking factories, V-weapon sites, submarine pens, and other targets on the Continent. During Big Week (20–25 February 1944) the 352nd FG participated in missions that bombers struck German aircraft factories. After conversion to North American P-51 Mustangs in April, the Group earned a Distinguished Unit Citation for their performance in Germany while escorting bombers to targets in Brunswick on 8 May 1944. That day, the group routed an attack by a numerically superior force of German interceptors and then continued the battle against the enemy planes until lack of ammunition and shortage of fuel forced the group to withdraw and return to its base. Also, the group flew counter-air patrols, and on many occasions strafed and dive-bombed airfields, locomotives, vehicles, troops, gun positions, and various other targets. P-51s of the 352d were identified by solid blue cowlings and rudders, for which the group was nicknamed "The Blue Nosed Bastards of Bodney". 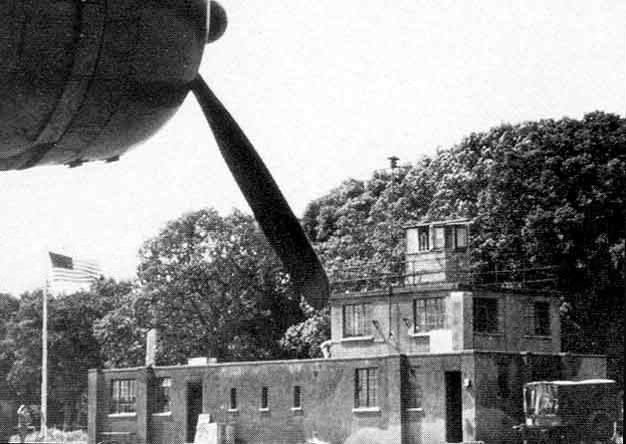 The original Bodney watch office (control tower). The American flag and leaves on the trees shows this photo stems from the summer of 1943 (USAAF, via controltowers.co.uk). 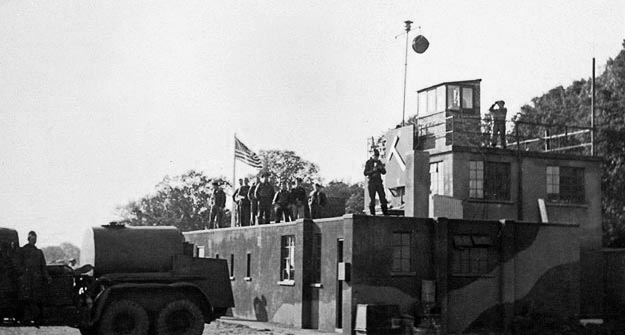 A communications board was put up on the control tower to allow communications with the aircraft without having to use radios. From the amount of men on the roof, it can be assumed the Fighter Group is expected to land at any time (USAAF, via controltowers.co.uk). 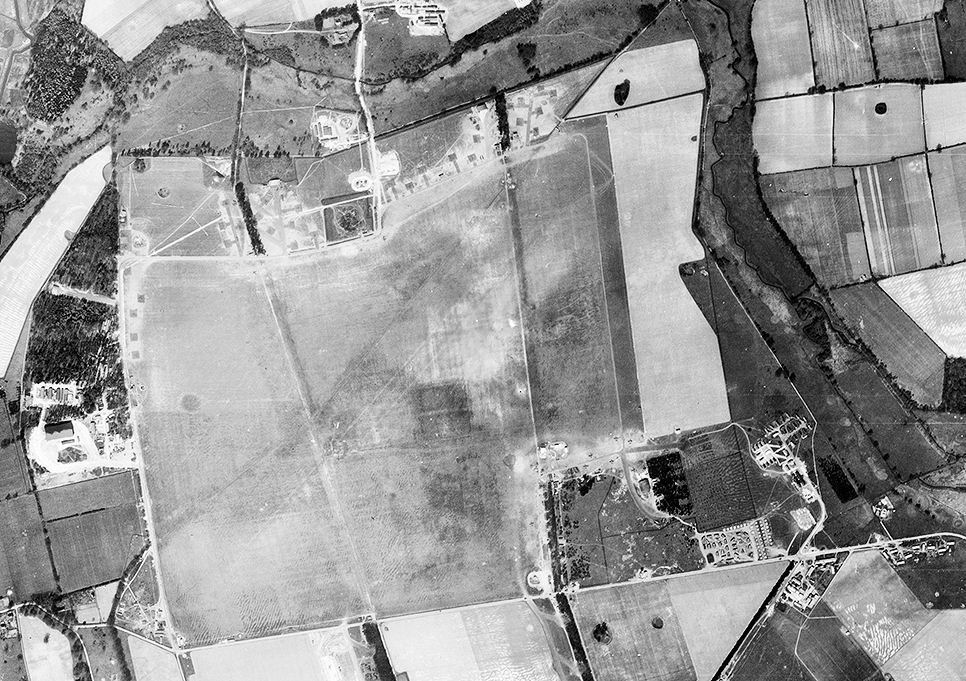 At some point in the spring of 1944 the airfield began to use a new watch office (control tower) on the southwest side of the runway, the old one on the west sie of the airfield was abandoned and demolished. On 6 June 1944, the airfield suffered a tragic incident, when in poor visibility Lt. Robert Frascotti's P-51 struck the new control tower (watch office), instantly killing the pilot. The watch office suffered a gaping hole which was repaired and the building remained in use.
The Group supported the invasion of Normandy in June 1944 by strafing and dive-bombing enemy communications, assisted the Allies in breaking through the German line at Saint-Lôin July, and participated in the airborne attack on the Netherlands in September. After the Germans launched a counteroffensive in the Ardennes in December 1944, the Group's planes and pilots were sent to Chievres Belgium for operations in the Battle of the Bulge (December 1944-January 1945) while placed under control of Ninth Air Force.
The 352nd returned to Bodney in April and continued operations until a few days before V-E Day. They had flown 420 missions, 59,387 operational combat hours, destroyed 776 enemy aircraft and had 29 aerial aces. 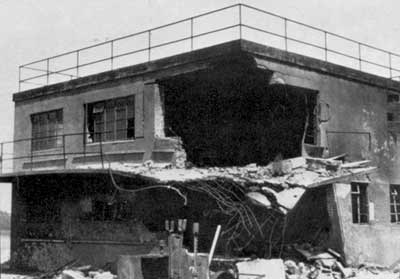 The Bodney watch office after it's unfortunate incident with Lt. R. Frascotti's P-51 in the dark early hours of D-Day (USAAF, via controltowers.co.uk)

After the war, the group returned to Camp Kilmer New Jersey and was inactivated on 10 November. With the end of US military presence, Bodney airfield was closed and was returned to agriculture in November 1945. Almost the entire facility was completely reverted to farmland, although a few derelict buildings remain, as well as its water tower, control tower and some aircraft parkings. The southeast side and the former barracks site have become part of a military trainng area. It is because of this area that the airfield saw aviation at least one more time: in 1989 at least two Chinoook, two Lynx, a Puma and a Gazelle helicopter are known to have visited the site. 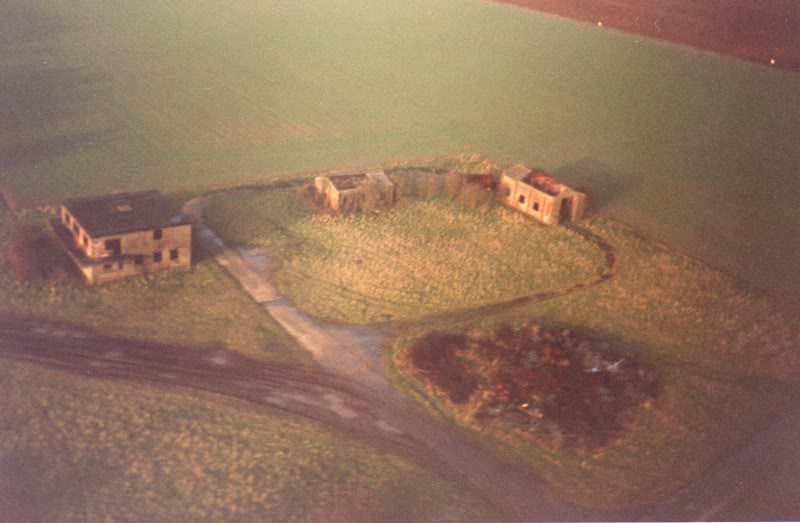 The area immediately around the second control tower in 1989 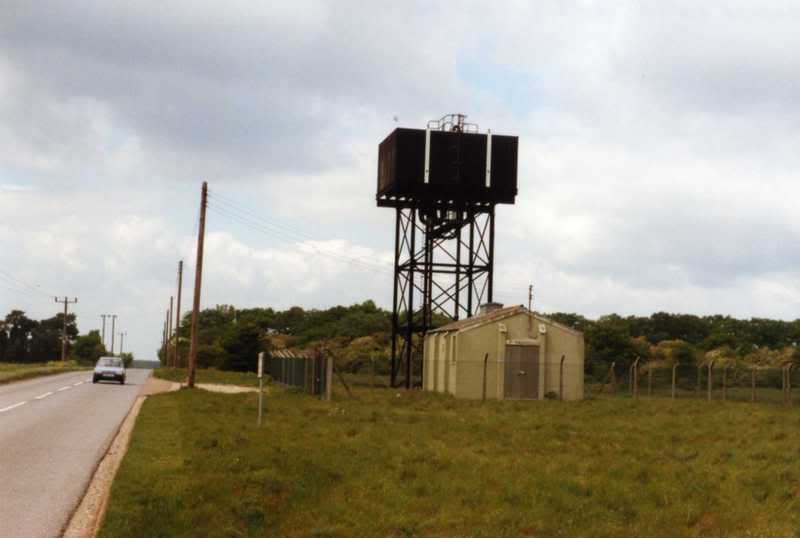 The water tower still stood in 1990 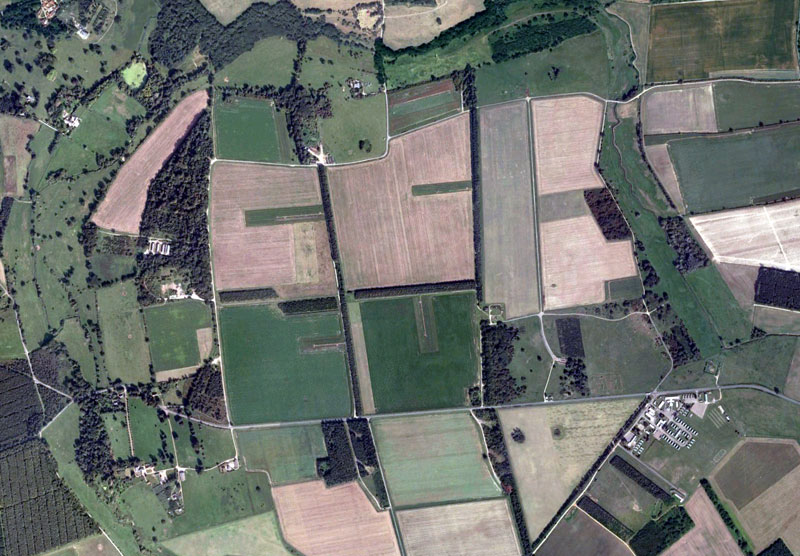 Bodney in 2006 (Google Earth)
contact us about this airfield