Bremgarten airfield (german: flugplatz Bremgarten, french: Base Aerienne 138 Bremgarten, also known as Fliegerhorst Bremgarten and Bremgarten Air Base, ICAO: EDSG (pre1990), ETSG (post1990), EDTG (post1993) is a special airfield 655 kilometer southwest of Berlin.
It was built from 1952 as a French air base in the French zone of occupation in Germany, on the east bank of the river Rhine. in addition to a nearly 3 kilometer long runway, it featured three squadron sized dispersal areas to the southeast of the runway, each with their own hangar in addition to a visitor platform with hangars. The airfield was deemed fit for use in 1954. On 31 March 1954, Base Aérienne Tactique 136 (BAT.136) moved from Friedrichshafen to the new airfield near the river, which formed the border with France. She then served as the base of the 4e demi-Brigade de Chasse, a Fighter unit initially equipped with the Dassault Ouragan, but later with the Republic F-84.

On 1 July 1961, after the departure of the semi-Brigade, the airfield was renamed Base Aérienne d'Opération 136 (BAO.136). Bremgarten became home to the 11e Escadre de Chasse, another fighter unit, equipped with the North American F-100D/F Super Sabre.
In 1963 already the airfield was renamed to the more general designation Base Aérienne 136, and on 1 September 1964 the Base became home to the Sikorsky H-34As of the Escadron d'Hélicoptères 1/67, who had been tennants of neighbouring Lahr as Escadron d'Hélicoptères Lourds 3/23. The squadron was dissolved on 1 March 1966.
After France announced its departure from the military structure of NATO, the Armée de l'Air withdrew from France completely. The 11e EC (11e Escadre de Chasse) moved to Toul-Rosières Air Base in September 1967, which had been in use by USAFE until their withdrawal from France. Toul-Rosières became the old Bremgarten BA.136 license plate in the process. Until the transfer of Bremgarten to the Bundeswehr (Federal German Armed Forces) on 1 May 1968, the French designated the airfield Base aérienne et Moyens de Support et de Soutien 178 (BMSS.178). 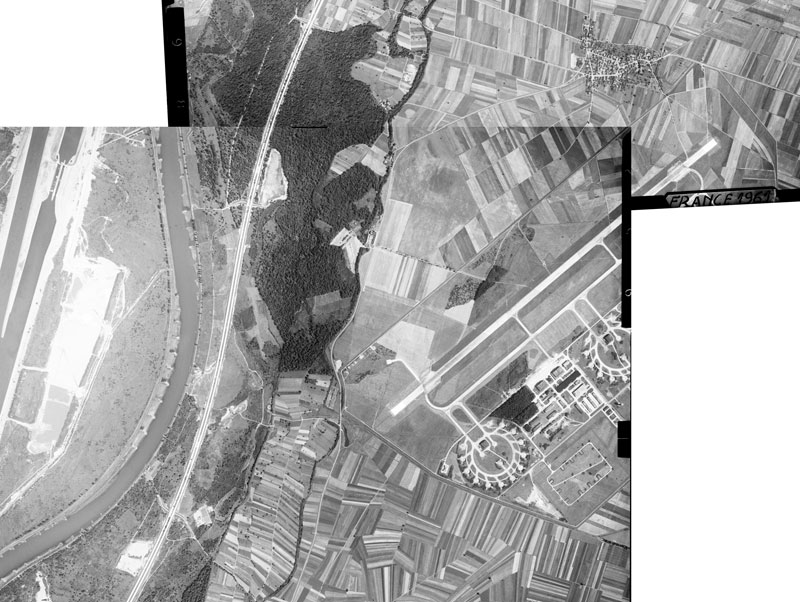 Composite photo of Bremgarten in 1961. In the original high resolution photo, the dispersals were filled with fighters, but alas the exact types cannot be recognised (RonaldV / IGN)

Shortly after the airbase had been transferred to the Luftwaffe on 20 May 1968, a preparty of Aufklärungsgeschwaders 51 (AG 51 or 51 Reconnaissance Wing) moved into the airfield. The flying unit would call the airfield home until it was closed in 1993. Their move into the airfield would be complete in 1969. 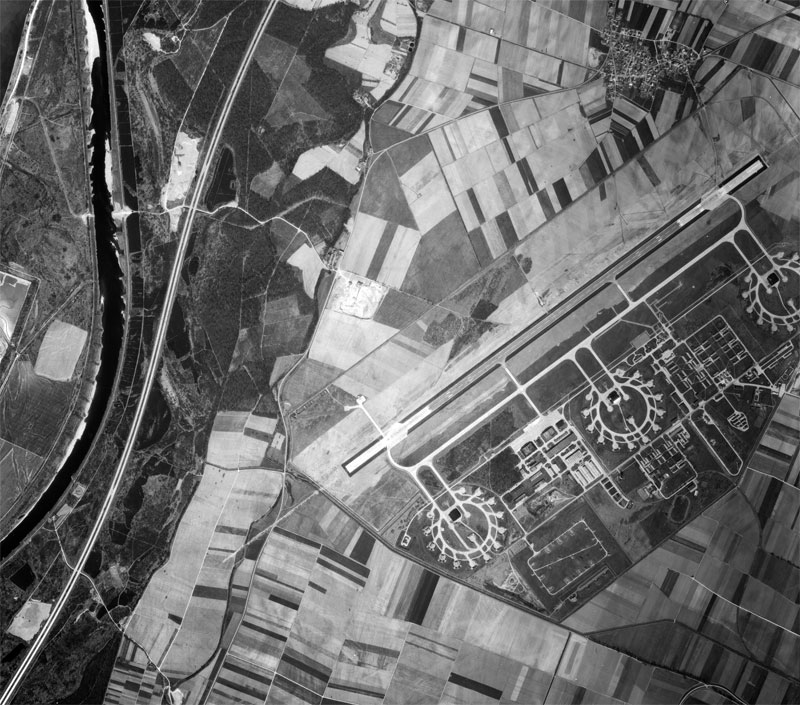 Bremgarten in April 1969. In the high resolution photo there is only one aircraft visible: a lone C-47 on the centre dispersal area (IGN) 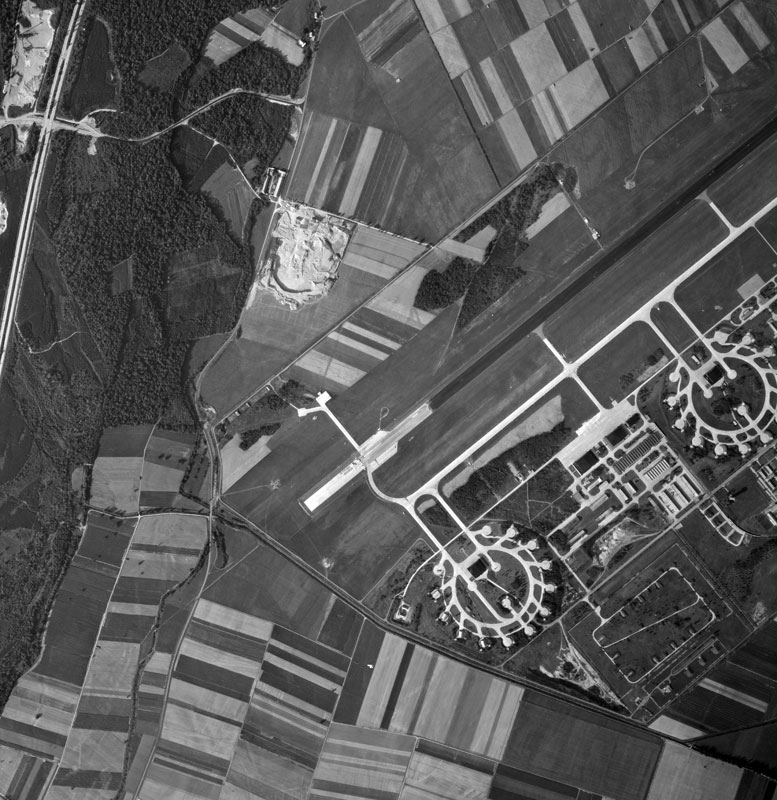 Bremgartens runway underwent extensive maintenance in 1970, as visible in this photo (notice the absence of runway markers). Only gliders were making use of the airfield, from the grass in front of the centre dispersal area (IGN).
The "Immelmänner", so named after their official nickname "Immelmann" initially flew the Lockheed RF-104G Starfighter. The first McDonnell-Douglas RF-4E Phantom II arrived early 1973 and it was this type that would set the sights at Bremgarten for the next two decades. AG 51 was dissolved after the fall of the Berlin Wall on 31 March 1993. Until the end of 1995 the Franco-German Brigade used large portions of the terrain, after that only the shooting range west of the runway and a training ground in the southwest were used by the military. 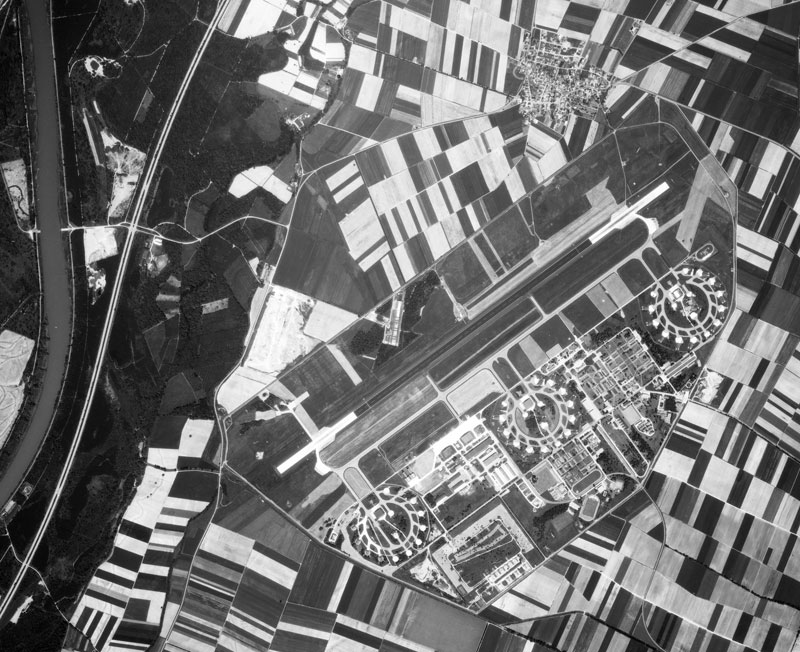 Earlier in the 1970s, the taxi tracks had received run up areas on both ends of the runway which are clearly visible in this photo of Bremgarten in 1979 (IGN). 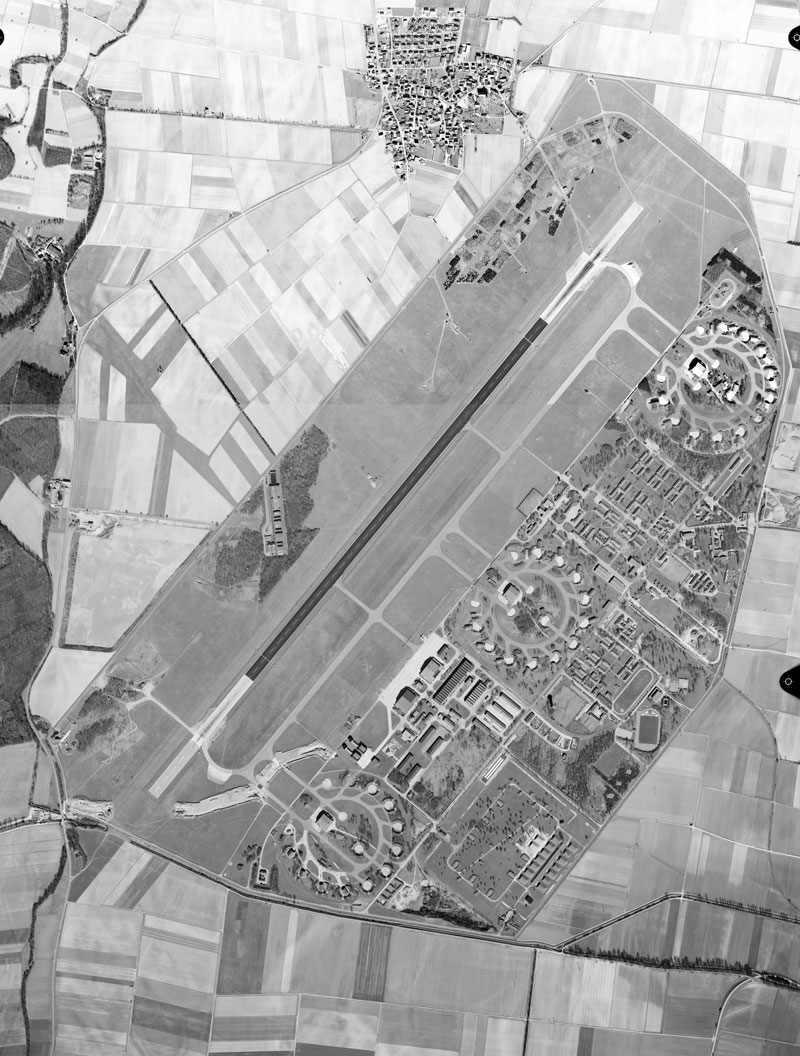 On 1 October 1994, twelve communities founded the Gewerbepark Breisgau. As of 1 January 1998 it runs the Gewerbepark (Commercial Park) Breisgau GmbH (Ltd). Since 6 June 1997 the Sonderlandeplatz (special airfield) exists.  The ICAO-code of the airfield was changed from EDSG to EDTG after the Fliegerhorst closed, and the usable length of the runway was shortened by over 1000 meter. A 600meter grass parallel runway was laid out in front of the tower. 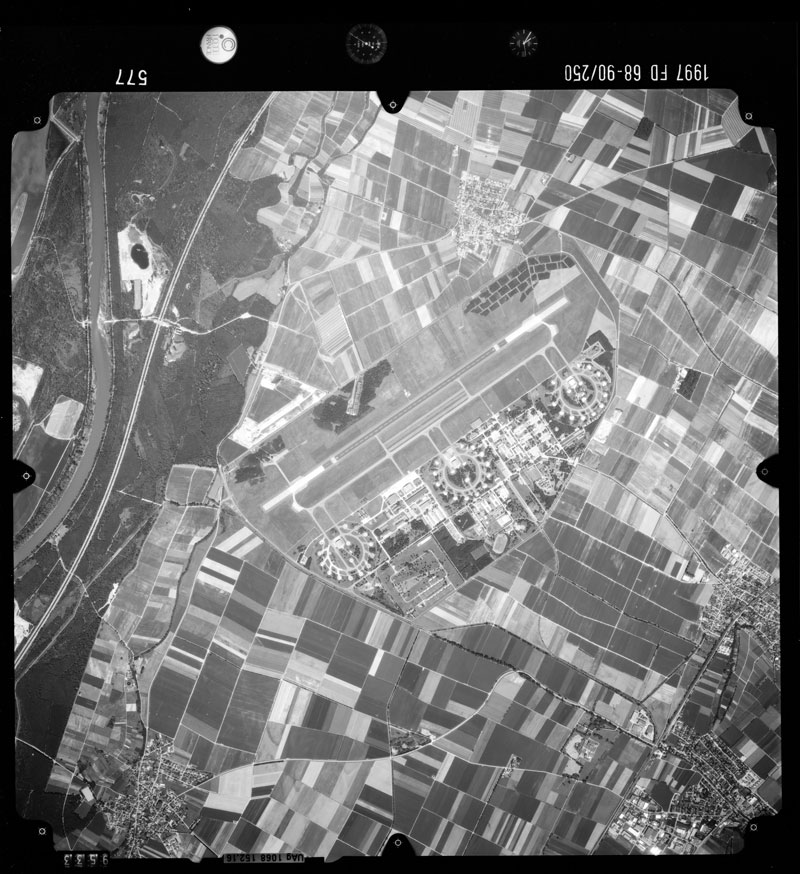 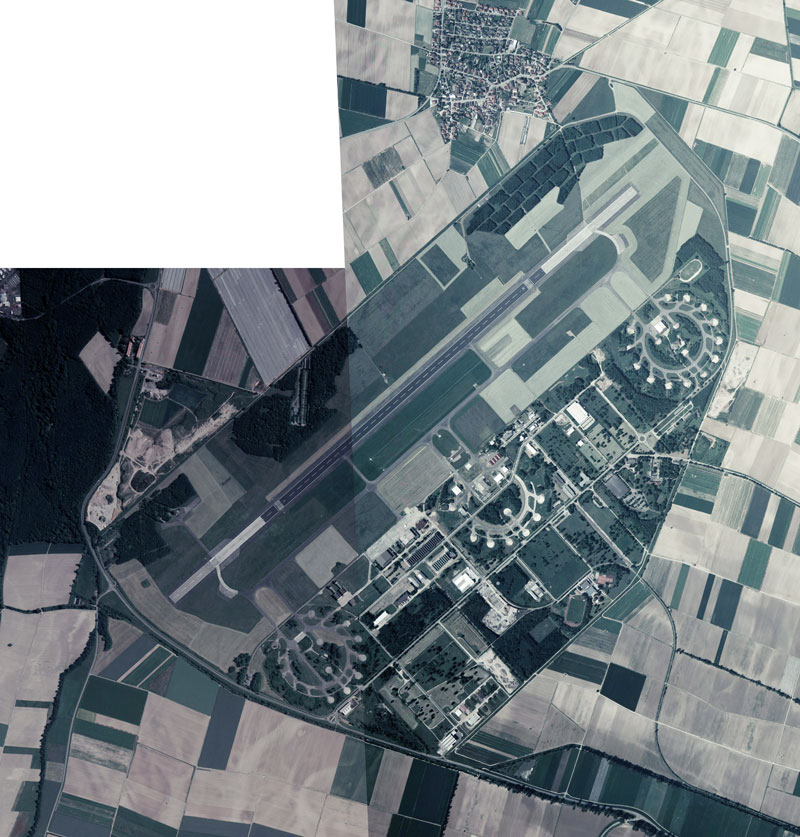 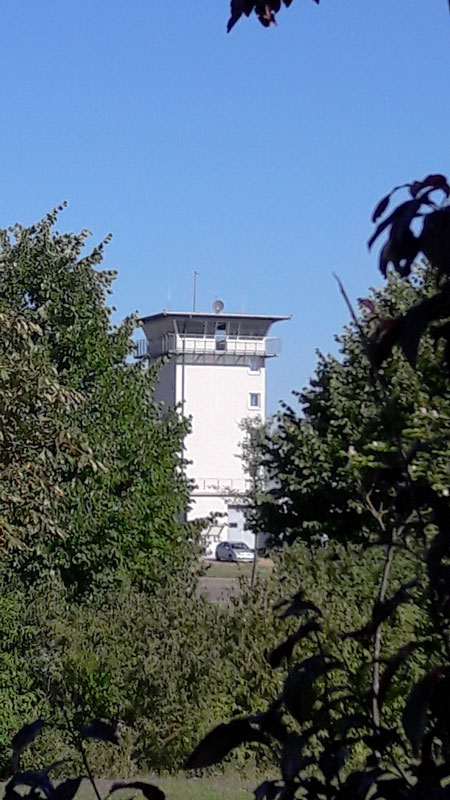 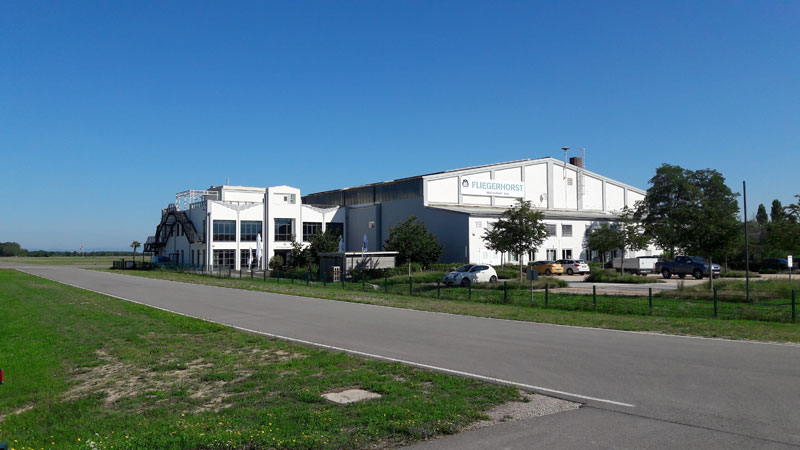 The aptly named restaurant "Fliegerhorst" (Air Base) was built next to a hangar at the platform (August 2017, RonaldV).