49°14'30"N 000°58'16"W
runway: 06/24 - 5000x120ft - SMT
Chipelle airfield (aèrodrome Chipelle, also known as Advanced Landing Ground A-5 'Chipelle') was an Allied wartime airfield in Normandy, France.
The airfield was built by 820 Engineer Aviation Battalion, with construction starting on 16 June 1944. The airfield opened on 5 July. As there is no town or village Chipelle, it's name may be a mystery to most. The name was given by the engineers who, after completing A-2 'Cricqueville', came to a halt near some houses with the sign 'Chipel' (meaning Archipelago) near the town of Cartigny-l'Épinay. The airfield was in fact located in two communities, the other one being St Martin de Blagny.
Besides a 1500m runway, 820EAB built  tents for accommodation and administration, as well as road access by expanding the existing access road.  They also built a supply depot and ammunition, fuel and drinking water and a basic electrical grid in order to illuminate the camp and to ensure radio communications.

On 3 July, the first P-47s of the 404th Fighter Group (506, 507 and 508 Fighter Squadron) were allowed to land on the airfield and the site was declared operational two days later. Their work done here, the 820th went to Balleroy to build A-12 Lignerolles.

In Normandy, the 'razorback' P-47s of 404 FG were not distinguished by a special decoration on the nose or tail. Instead, there was a tradition among them, rarely seen in other units of the 9th Air Force, to paint a name (a person's name or place or even a nickname) in huge letters on the sides of the fuselage, under the cockpit.
On 24 July, the airfield was accidentally hit by 350 bombers of the 8th Air Force during Operation Cobra. Bad weather had caused them to miss their target, Saint-Lô, and have their bombs end up on the friendly side of the bomb line.

By the end of the month, the Group had flown 169 combat missions and lost 12 pilots, 5 of whom were taken prisoner. At the end of the Battle of Normandy, the Group left A-5 for Brétigny (A-48), having lost 22 men in action over Normandy. They are remembered on a church wall in St. Martin de Blagny. The 404th Fighter Group was awarded, in addition to its' U.S. awards, the French Croix de Guerre with palms. 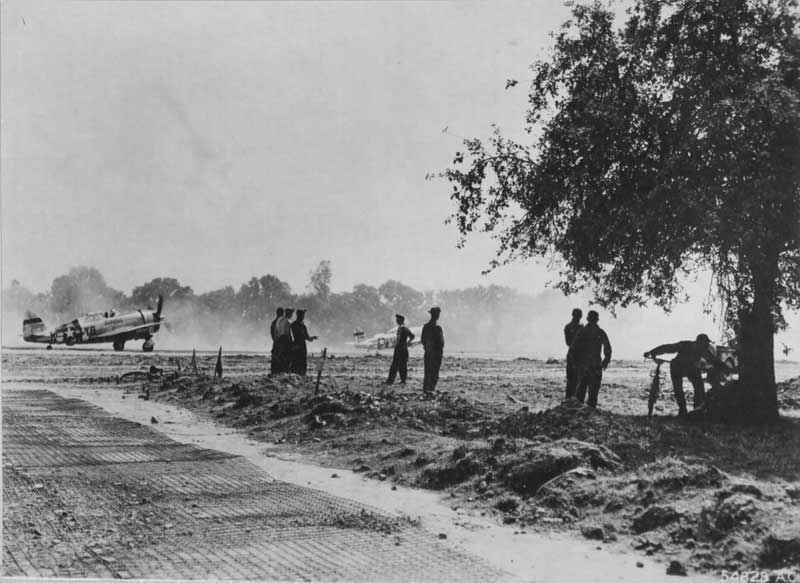 Although the photo is officially labelled to have been taken in Belgium, I believe this photo of 404 FG 'razorbacks' was actually shot at Chipelle (fold3.com). 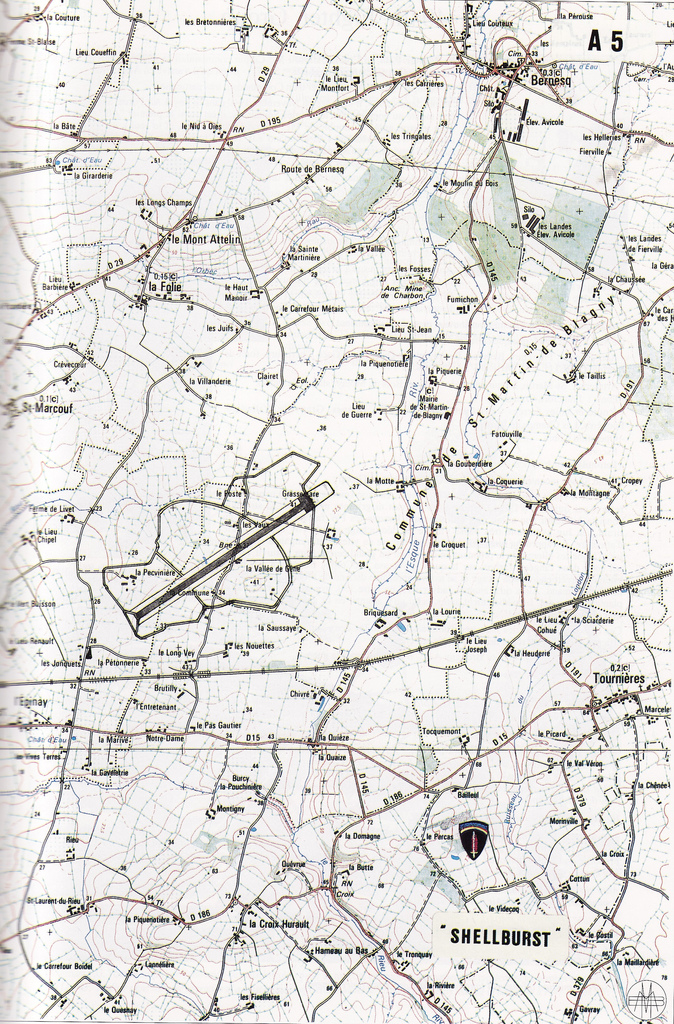 This map shows the lay out of A-5 airfield. The shield and the word "Shellburst" indicate the position of Eisenhowers field headquarters in Normandy (histomil.com)

The airfield closed on 5 September 1944. It's lines were still clearly visible 3 years later. Some scarring of the lands was still recognisable in the mid-1960s. Even today, the location of the runway can still fairly easily found on Google Earth of Bing Maps. The famous Normandy hedges have not been grown back to this day. 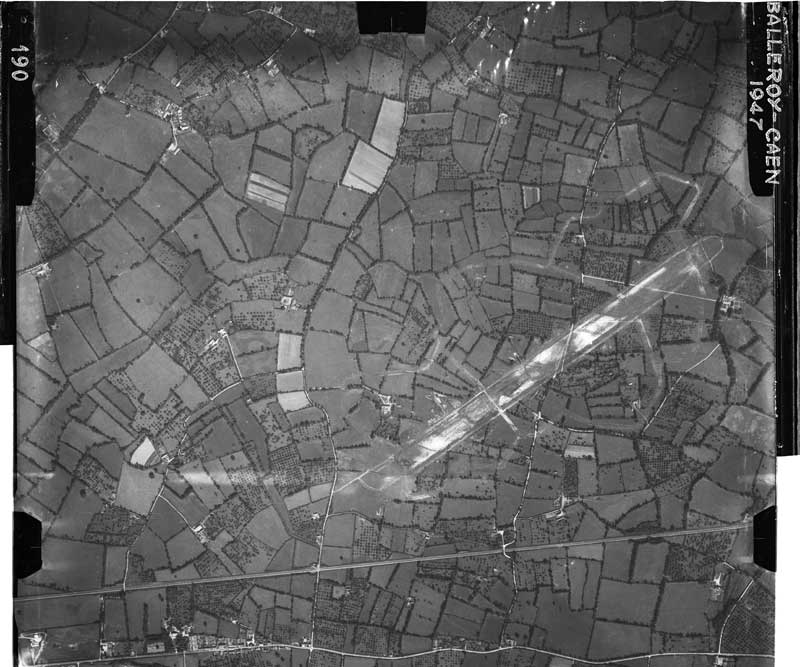 The airfield was still recognisable in this August 1947 photo, three years after the airfield closed (IGN, via Géoportail) 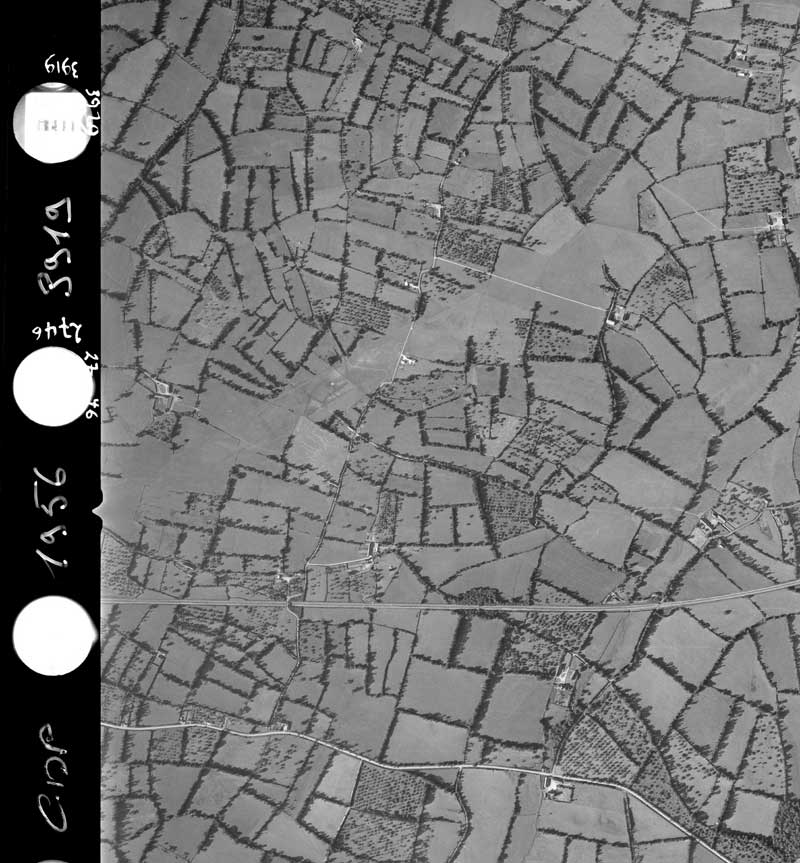 An afternoon photo shot in 1956 provides sufficiently long shadows in the trees to show the area where the runway once was (IGN, via Géoportail) 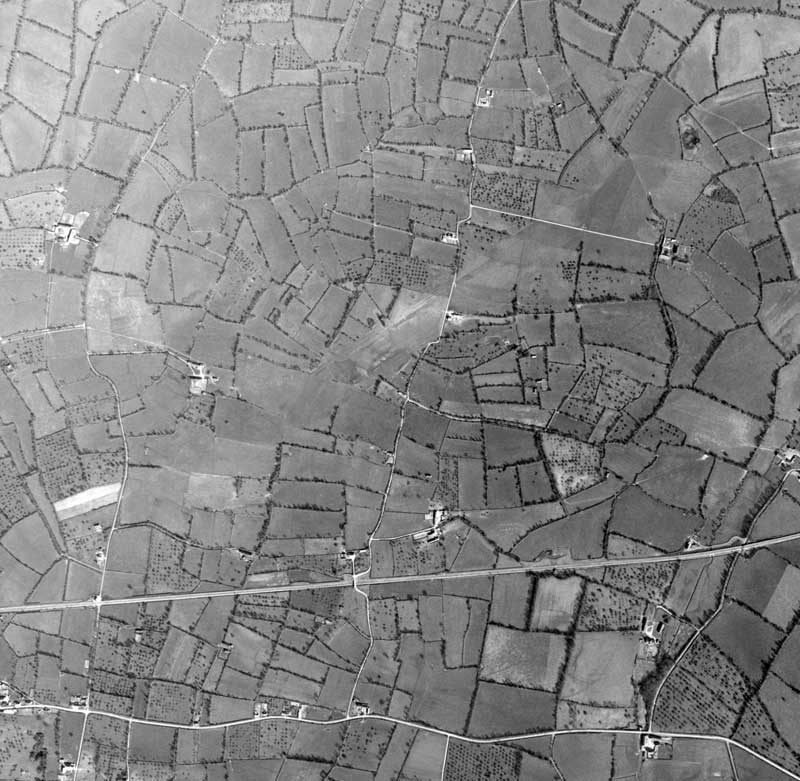 Even in 1965 there were sill major scars visible in the landscape (IGN, via Géoportail).
contact us about this airfield