47°41'26"N 003°39'48"E
runway: 11/29 - 1200x40m - asphalt (CLOSED)
runway: 11/29 - 700x40m - grass
Cravant air field (French: Aerodrome de Cravant, also known as Flugplatz Cravant) was an airfield 160 kilometers southeast of Paris.
Construction of the airfield began in 1940, but its aviation history began in 1935.
That year, the exploitation of the limestone quarry that had been in operation for nearly 800 years came to an end.
The occasion drew the attention of the Lioré et Olivier aircraft manufacturing company.
They considered the quarry, enormous and shielded by a 100m meter thick 'roof', a suitable place to establish an aircraft plant for the Aéronautique Militaire.
Construction of the plant, to be called 'Centre V', began in 1939.
The plant was to be run by the Société Nationale de Constructions Aéronautiques de Sud Est (SNCASE).
SNCASE was to produce the medium size LeO45 bomber.
Across the Yonne river, construction of an airfield with a 1200x40m runway to support the plant, began in 1940.
The two were to be connected by a 500m cable capable of carrying heavy loads, such as fuselages or wing assemblies.
Construction of an arched assembly hall, 132x50x16m (length x width x height), south of the runway had begun as well.
The war with Germany ended all construction however.
By 1943, Allied bombing was causing the Germans to begin looking for protected sites for their wartime production.
From October 1943 the Germans began running a plant for the repair of war damaged FW190s.
The facillity, the only one on the western front, was run by AGO Flugzeugwerk until August 1944.
Damaged FW190 fighter bombers were usually delivered by rail to Cravant-Bazarnes in wagons covered with straw.
Once repaired, the Germans transported the aircraft to Auxerre, where they were to be reassembled and test-flown.
The Germans never completed the local runway.
They covered the first 800 meters with asphalt and the remaining 400m were covered with grass.
Little or no FW190 test flights were ever undertaken from the airfield.
Perhaps this was to avoid drawing attention to the repair plant, as the Germans by this time no longer had control of the skies.
After the invasion of Normandy (D-Day landings) the plant began seeing more interest from the French Resistance.
Also, an ever increasing amount of forced labourers began to escape the complex.
The last 3 FW190s arrived on Tuesday, 1 August 1944.
The last day under AGO control was Saturday 19 August 1944, by which time only French workers remained.
The Germans properly paid their salaries on Monday 21 August, just before they departed the area.
Facilities at both the plant and the airfield were destroyed between 20 and 22 August, carried out by Belorussian Auxiliaries.
The plant itself survived however, because the explosive charge failed to detonate.
During the seven months of operation, no less than 166 Focke-Wulf 190 fighter bombers of all subtypes were evaluated by the workshops at Cravant. 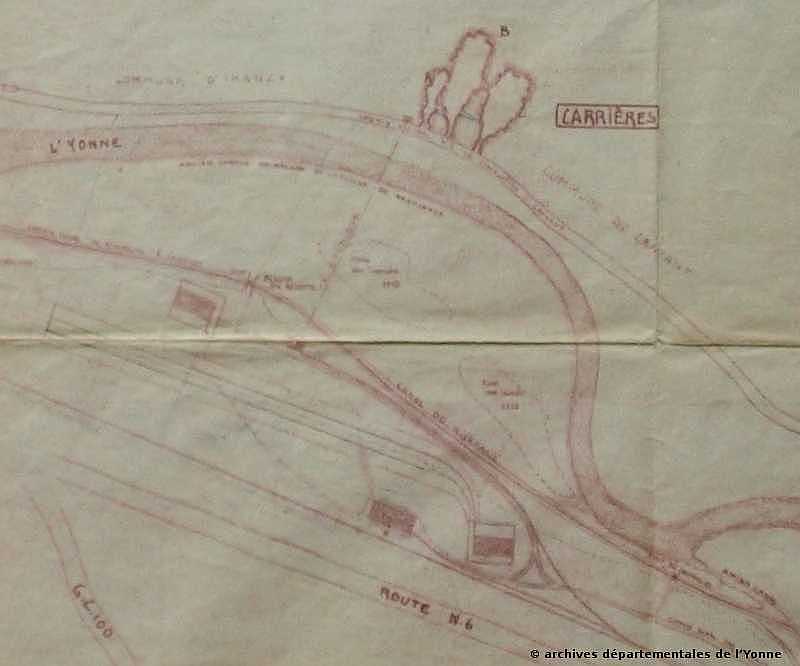 1939 map of the planned airfield (aviatroglo.fr).
An inventory done by American and British intelligence in October 1944, reported 120 fuselages and 156 wings in appearantly good condition were still at the plant.
All parts belonged to different versions of the FW190, including the A4, A5, A7 and A8.
FW190 parts continued to be reported across the country.
One hundred BMW801 fighter engines were found in the Dordogne region for instance.
Additionally, many damaged FW190s were retrieved at captured airfields by the Allies.
It became very tempting to restart production of the fighter from the parts that were found.
For the authorities, it meant it became possible to transition to more modern aircraft.
Additionally it would stimulate activity in the French aviation sector.
And finally: restoring a FW190 cost only 1.5 million francs, whereas a new Spitfire IX would amount to 12 million.
On 16 November 1944, with only 78 workers and virtually no tools, production was restarted at was now known as the "Atelier de l'Air".
On 14 April 1945 the "Société Nationale de Constructions Aerospace Centre" (SNCAC) replaced the "l'Atelier de l'Air".
At the same time, the "FW190 Francais" was renamed the NC900, which was declared fit for duty on 11 May, 3 days after VE-Day.
The plant ultimately closed on Monday, 18 February 1946, when after one year, 70 aircraft had been assembled at Cravant. 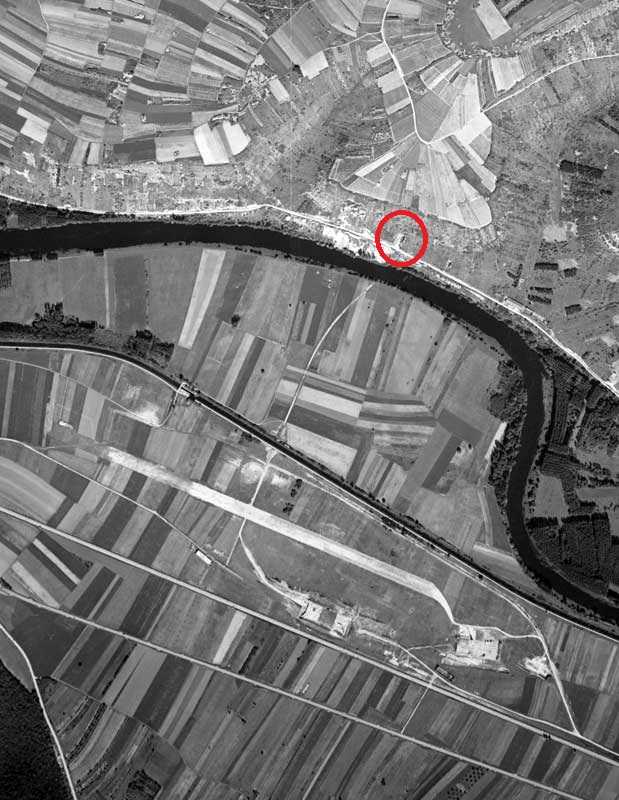 Cravant in September 1949. The red circle shows the main entrance to the Centre V/AGO Flugzeugwerk/SNCAC production facility (IGN, via Géoportail) 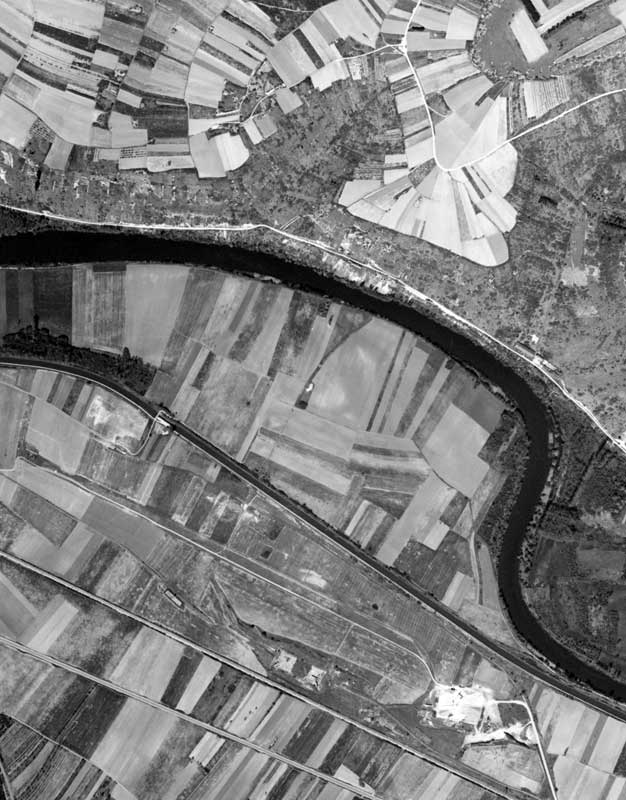 Cravant photographed in early May 1962. The airfield is almost overgrown and likely not recognisable from the ground (IGN via Géoportail)
Today, some of the ruins can still be seen.
The base of the large assembly hall still exists south of the airfield, for example.
The airfield itself is nowadays a small Ultra Light airfield.
At the western end of its grass airfield lies a small hardened runway for cadio controlled aircraft. 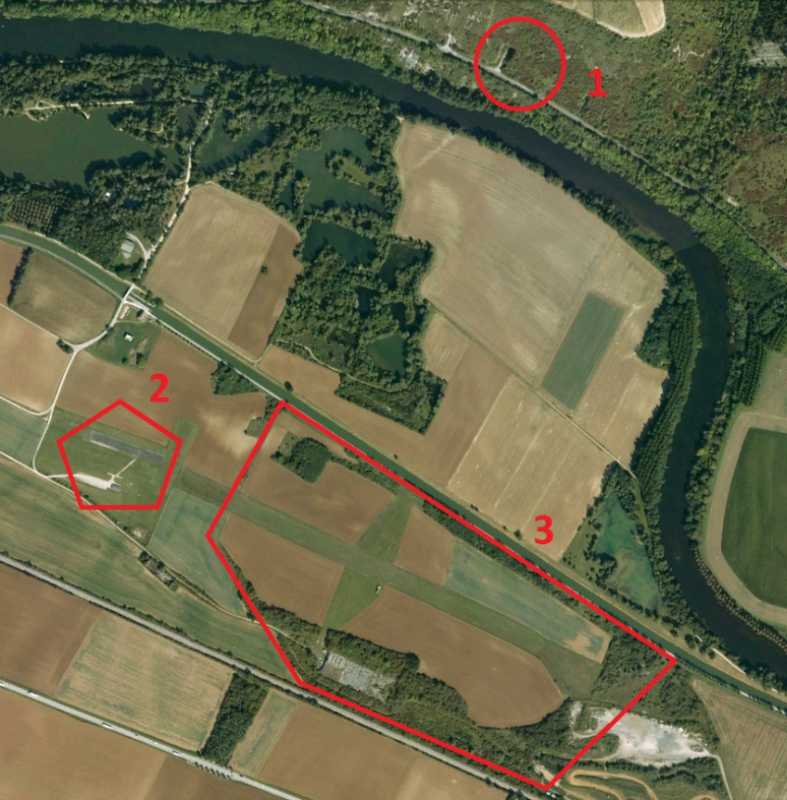