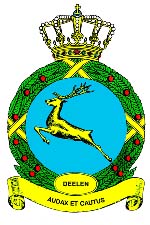 Airfield Deelen (Dutch: vliegveld Deelen, vliegbasis Deelen, or Militair vliegterrein Deelen, also known as Fliegerhorst Deelen, Deelen Air Base or Military Aviation Terrain Deelen, ICAO: EHDL) was an air base north of Arnhem.
The airfield opened as an auxiliary airfield in 1913 to support flying operations of the Luchtvaartafdeeling (LVA) in Soesterberg. Along with the airstrip at Nieuw Milligen, it was intended to suppport patrols along the Dutch-German border during World War I.
The original airfield was situated north of the Vrijland estate. Its unpaved runways were ploughed under in early 1940, in order to disable them for possible use by invading German troops.

After the invasion, the German occupying forces greatly expanded the airfield to the north, partly into the municipality of Ede, and partly in National Park "Hooge Veluwe". They renamed the airfield "Fliegerhorst Deelen" (code named Alster) and built an 'A'-shaped runway system and facilities, adhering to the most modern standards of the Luftwaffe. It included measures such as bomb protection and far going camouflage (the so-called "Heimatschuetz". From 1942 the Fliegerhorst had it's own railway connection, the so called "bomb-line", which connected the line Arnhem-Utrecht with the Fliegerhorst.
On the south side of the airfield two storage halls and loading and offloading platforms were constructed. A branch ran into the "Hooge Veluwe" park, where fuel and ammunitions were stored, another branch split off to the Grossraum-Gefechtsstand "Diogenes", the German Air Defense bunker (type Ceasar).
Between 1940 and 1945 the following units were stationed at Fliegerhorst Deelen:
4e Gruppe Jagdgeschwader 54 (Focke-Wulf Fw 190)
3e Zerstörergeschwader (Messerschmitt Bf 110)
2e Gruppe Nachtjagdgeschwader (Junkers Ju 88)
4, 7 and 12 Flak Gruppe
In the buildup to Operation Market Garden (The "Bridge too Far) the Fliegerhorst was bombed several times, causing the Luftwaffe units to leave the airfield. It remained open however, for use as an auxiliary field, and to store V-1 flying bombs. By March 1945 all military activities at the airfield had come to a halt. 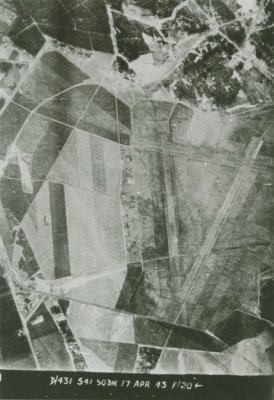 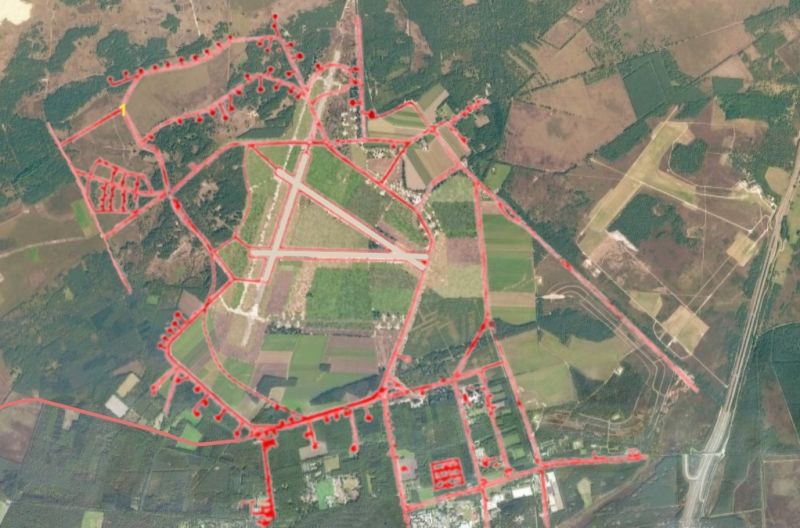 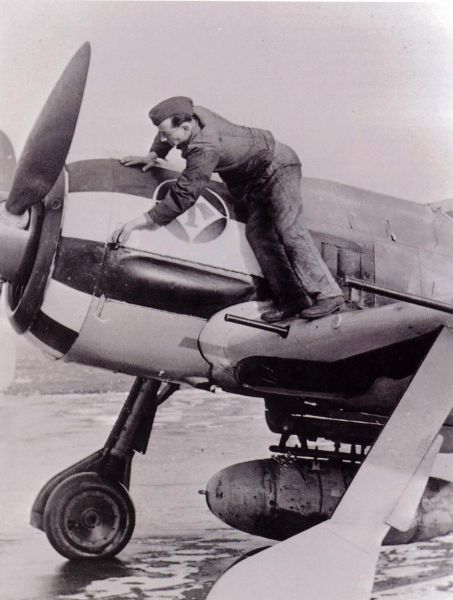 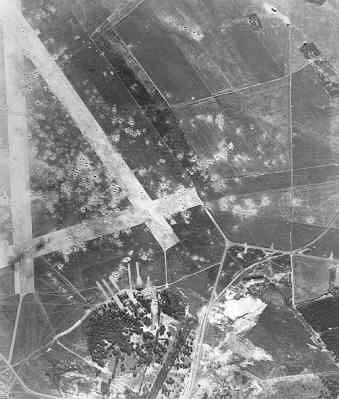 Deelen, photographed in September 1944. A large number of craters is visible on the tracks, making it very clear that German air operations could no longer be performed from this airfield (NIMH). 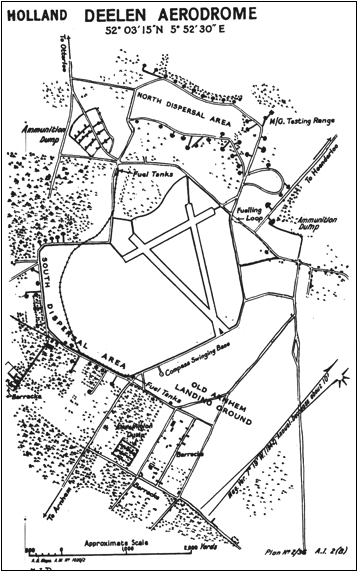 Between 1945 and 1950 the airfield was used as storage area. It contained American, English and mostly Canadian (Canada left some 37,000 vehicles, motorbikes and trucks at the airfield) war supplies, but captured German stocks could also be found. After 1950 the Netherlands government expressed their wish to reuse the airfield and all stocks were removed from the airfield. Some of it got buried at the airfield however, where they remain to this day. 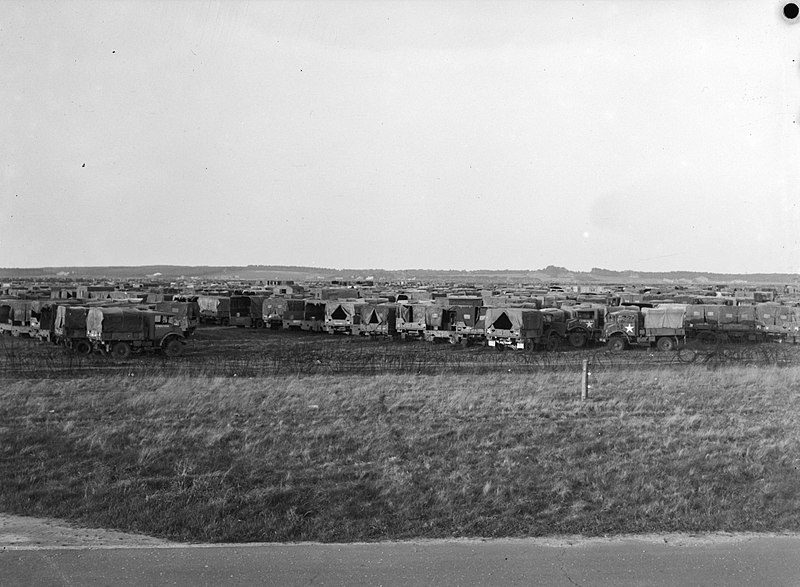 Between 1957 and 1962 Deelen Air base became the home of the RF-84F Thunderflashes of 306 Sqn. After the conversion to RF-104G Starfighters, 306 Sqn, relocated to Volkel, continued to use Deelen as a dispersal airfield.
306 were followed by the Light Aviation Group (Dutch: "Groep Lichte Vliegtuigen" or GPLV) with 299Sqn and 300Sqn (along with two inactive wartime squadrons: 301Sqn and 302Sqn) and their associated logistics group.
299Sqn and 300Sqn flew the following aircraft types:
Hiller UH-12 Raven
De Havilland Beaver.
Piper Cub.
Sud Aviation (Aerospatiale) Alouette-II.
Sud Aviation (Aerospatiale) Alouette-III
MBB Bo-105
From the late 1970s, the base was home to the Grasshoppers, the official RNLAF helicopter demonstration team. The airbase also supported the nearby Air Force Electronics and Technical School LETS (Dutch: Luchtmacht Electronische en Technische School) and the Royal Non-Commissioned Officer School KKSL (Dutch: Koninklijke KaderSchool Luchtmacht).
In December 1988 Deelen made national headlines when militant pacifists broke into the air base and set fire to a number of helicopters. Although 4 helicopters were a total loss, nobody died or got injured during the attack. 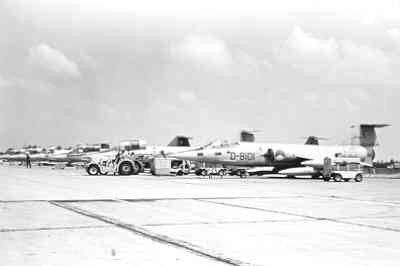 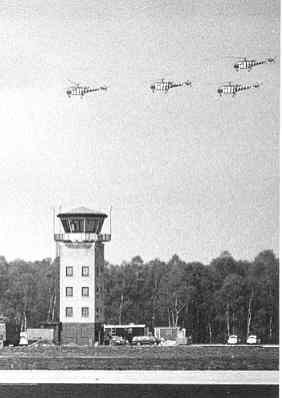 The Grasshoppers, in their original 'Zebra' scheme, passing Deelen tower in 1979 (NIMH). 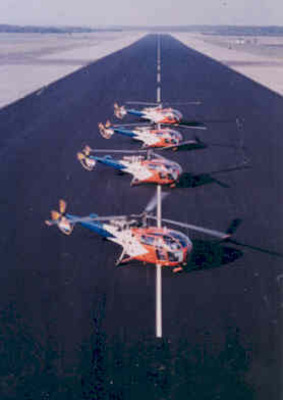 The Grasshoppers on the Deelen runway in 1980, presenting the colour scheme they would carry until the teams' disbandment in 1995 (NIMH). 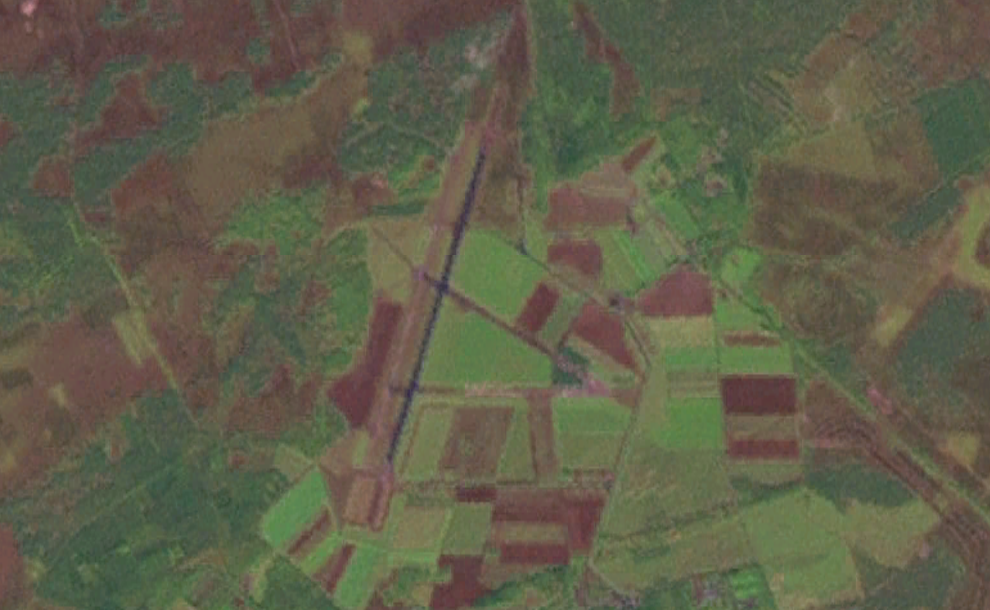 Landsat view of Deelen Air Base in the Netherlands. Made using the NASA Worldwind program (Wikimedia)

In the early 1990s, the International Air Tattoo intended to hold its first Air Tattoo on the European Mainland at Deelen. While all the paperwork was completed and ticket sales were about to begin (international advertising had already begun), Dutch environmentalists discovered a minor crack in the permission and managed to open it so far that the organisers had no choice but to abandon the plan. No International Air Tattoo has been held on the European main land since.
The end of the Cold War signalled the end for the air base, which closed in 1995. It was thought to be largely returned to nature, but events took a different turn. Deelen was redesignated a Military Aviation Terrain, in support of the nearby Air Manoeuvre Brigade, which had also taken over the KKSL and LETS barracks. As such, it was used as a forward operating base (or FOB) for helicopters and C-130 Hercules transports during exercises. 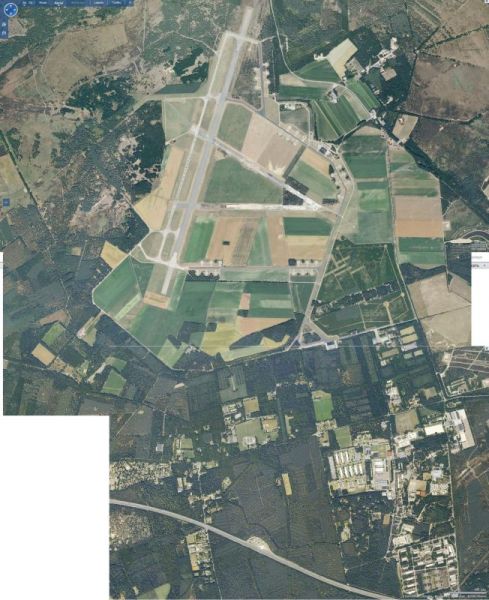 Deelen in 2009, composite image from Bing.com 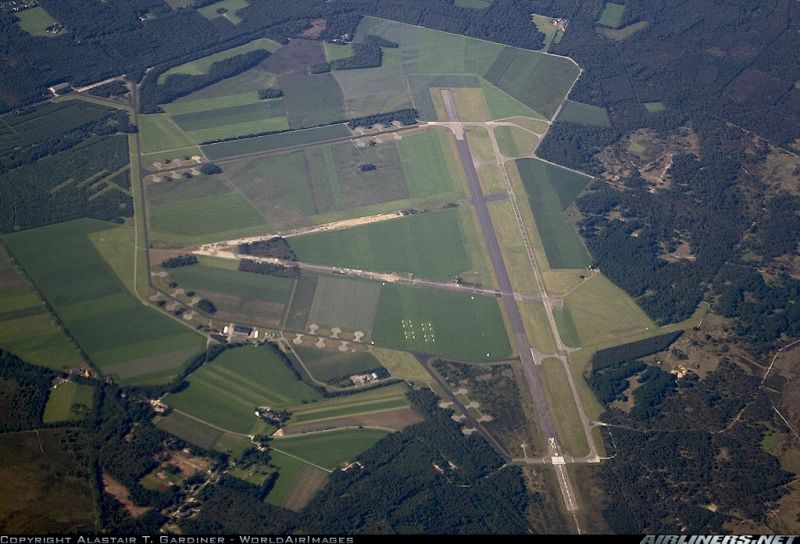 Deelen Air Base seen from the north in 2008 (Airliners.net)

After the closure of Soesterberg in 2009, Deelen regained its status as an air base, albeit with a sleeping status, only activated for exercises. Around 2013, runway lines were painted on the north side of the runway, albeit at greatly reduced length (770m). Although located relatively close to Air Operations Control Station Nieuw Milligen, the airfield is administered and serviced by Defense Helicopter Command personnel from Gilze Rijen Air Base. 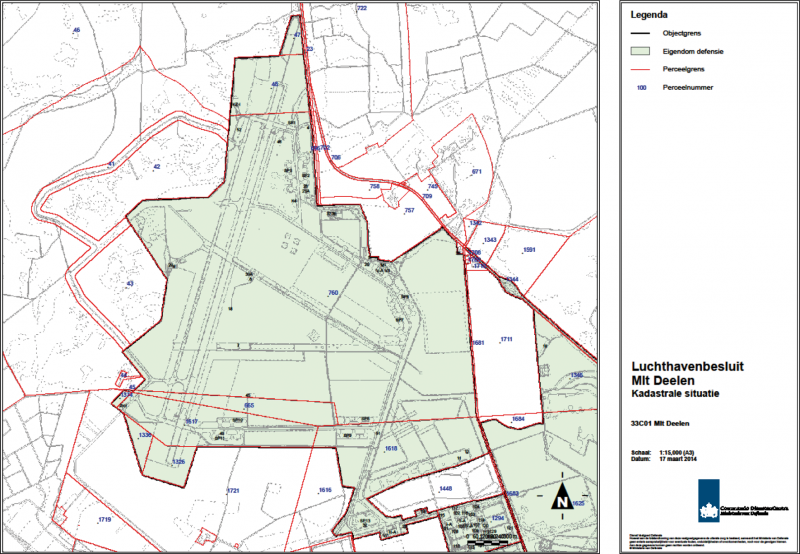 "MLT Deelen" on a 2014 map of the airfield. The map was an annex to the formal announcement that the airfield was to become an airfield again, instead of just a Militairy Landing Terrain or MLT.

The airbase was used by the RNLAF without changing much of the original German buildings. As a result, it is one of very few places in Europe where the German "Heimatschutz Architektur" is well preserved. This is why the Dutch Ministry of Culture put the entire complex and its surrounding complexes -a total of 251 objects- on a heritage protection list. Its sheer size makes the Air Base the largest National Cultural Monument in the Netherlands.
The "Heimatschutz Architektur" meant that bunkers and hangars were camouflaged to make them look like Dutch farms. In fact: some of the off-base buildings are in use at farms today. Only if you inspect them up close you will notice walls are a meter (3 feet) thick, windows and doors are actually painted on walls, hatches are made of thick steel, and German texts can still be found all over the air base.
The Germans did make a mistake though: instead of using the local Gelders traditional style of building they used the Holland style. For the purpose it did not matter: the camouflage worked. 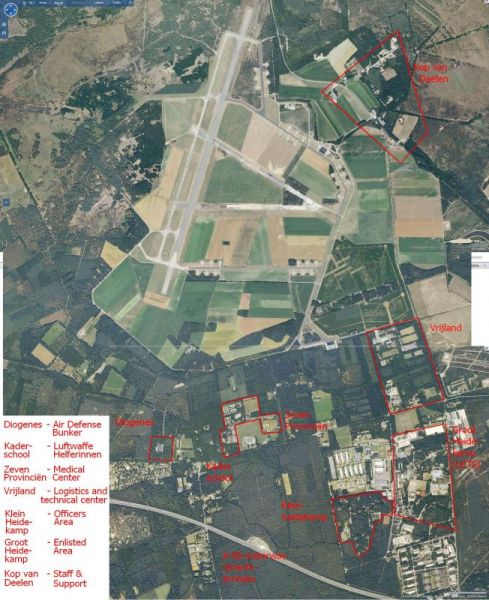 Complexes around the Air Base:
Klein Heidekamp (german: Klein Heidelager): the former officers camp. Served multiple roles after the war, is now being renovated for use as barracks.
Groot Heidekamp (german: Groß-Heidelager): the former enlisted camp. Served for decades as the Air Force Electronics and Technical School "LETS", until that was merged with all other Air Force schools at Air Base Woensdrecht (EHWO) in the 1990s. It is now a part of the Oranje barracks of the Army, and houses the school battallion of the Air Manoeuvre Brigade.
Vrijland: during and after the war the technical workshop of the Air base, currently in use by the Military Aviation terrain detachment and a private security team.
Kop van Deelen: During and after the war the command center of the air base. from 1995 till 2004 in use to house asylum-seekers, then sold to a private initiative. Also the location of the former NCO mess, now a museum dedicated to the Air Base.
Bunker "Diogenes", a former Air Defense Bunker (now a depot of the State Archives).
Several Wärmehalle (heated hangars).
Several Splitterboxen (protective revetments for aircraft).
Several Flakstelle (FLAK stations).
A compensatingdisc (a disc to check on board compasses).
Teerosen I, II and III (radio listening points to aid intercepts of Allied bomber raids) at Terlet, Rhederheide and Imbosch
Kaderschool, the former Luftwaffe Helferinnen (female Luftwaffe personnel) camp, later the Royal NCO school of the Netherlands Air Force (KKSL), later Air Manoeuvre barracks, then abandoned without a mission for years. It is now part of a private complex.
Zeven Provinciën, built during World War II by the Germans, it became the medical complex of and integrated with the Air Force NCO school. Abandoned by the armed forces and without a mission, the complex was sold off.