Air field Detmold (German: Flughaven Detmold or during WW-II Fliegerhorst Detmold, ICAO: EDLJ since 1999, ETUD in 1995, before 1995: EDUD) was an air field in the city of Detmold.
Although Lippe County had been considering the construction of an airport since the 1920s, no action was taken due to cost and lack of interest by its intended user Luft Hansa. Construction of the airfield therefore did not begin until 25 April 1934. A very modest airfield, Detmold was laid out as a 500x500m airfield with a single hangar. Before it was opened it was already decided to expand the airfield to 700x700meters on 5 September 1934. Only 5 days later it was decided to expand the airfield even further (1000x1000m) to allow it to be used as an emergency airfield by the Luftwaffe.
The airfield was opened in October 1934 on the northeastern edge of the city and was intended for recreational (glider) flying. Civilians only got to use the airfield briefly though, as three months later the military took over the airfield. From 15 February 1935 they began converting it to their standards. The company that owned the airfield was dissolved on 29th April 1936, only 2 years after its foundation.
Luftwaffe construction consisted of a number of large hangars and a barracks compund west of the airfield. A flying school and school facilities were built and the entire grounds were declared military and off limits to civilians.
Aircraft used in flight instruction were: Bü-131, FW-44, He-72 and Kl-35 for primary training and for advanced training Ar-66, Go-145, He-46 (B1), FW-58, Junker W33 and W34. Such a flying school typically had around 90 training aircraft, plus a few types for type instruction for front-line service. Types that frequented the airfield were Ju52/3m, Bf109, Bf110 and He111.
The front line units that used Detmold during World War II were III./JG3 (28 March - 10 April 1940) and 2./JG27 flying Bf109Es (November 1940 - 10 January 1941).
The airfield and its maintanance unit were involved in the production of the wooden Focke-Wulf Ta 154 Moskito nightfighter. This occurred in part because the nearby furniture industry was used to produce parts for the aircraft, but developement of the aircraft was terminated in late 1944. The airfield was never bombed, but allied fighters did attack it on occasions.
In early 1945, the airfield was prepared for demolition, but due to malfunctions only a part of the maintanance hangar and the aircraft at the airfield were destroyed. The Americans used Detmold as an Advanced Landing Ground (ALG), for which they hardened and lengthened the runway with PSP. Heavy cargo planes flew into the aifield within minutes, often throughout the night. 6 months later the British arrived.

During the Cold War the city became the Garrison of 20th Armoured Brigade of the BAOR, who used the airfield (known as Hobart Barracks) for army observation flights by the AAC. Aircraft flying from Detmold included Auster AOP6 (652Sqn, RAF), DH Chipmunks, Saunders-Roe Skeeter, Westland Scout (Wasp), Gazelle AH1 and Lynx AH1/AH7 (654Sqn, 659Sqn, 669Sqn AAC) helicopters.
Regular German civilian use of the airfield began in 1964, when the LSV Detmold glider club was allowed to use the airfield. Later the airfield was also frequented by RAF Harriers from nearby Gütersloh.
Some years after the end of the Cold War (in 1995) the British left Detmold airfield, which subsequently closed. The airfield reopened in 1999 when glider activity, helicopters, civilian and recreational use were permitted after some changes had been made to the local infrastructure to facilitate the local population. 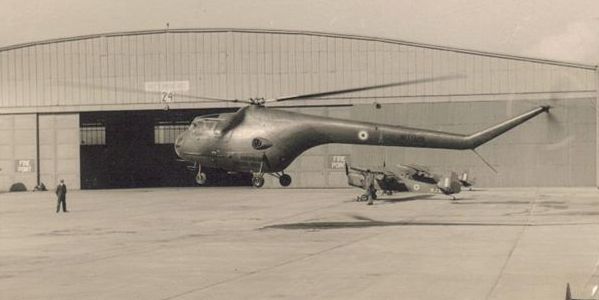 Detmold in the 1950s showing two Auster AOPs and a Bristol Sycamore (source).

A retired Saunders-Roe Skeeter AOP12 helicopter on display in front of the Regional HQ. 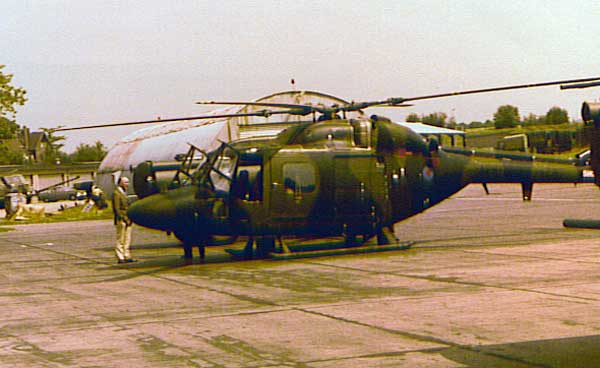 The CO of 4 Regt welcomes the first new Lynx helicopter at the Detmold platform. The hangar in the rear was later replaced with a more permanent model (J. Williams, via Andy Ottaway) 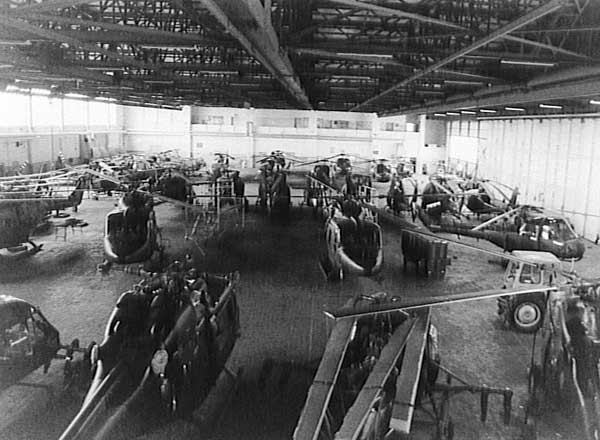 4 and 9 Regiment helicopters (Lynx and Scout) are seen sharing the hangar in 1978 (M. Reynolds, via Andy Ottaway). 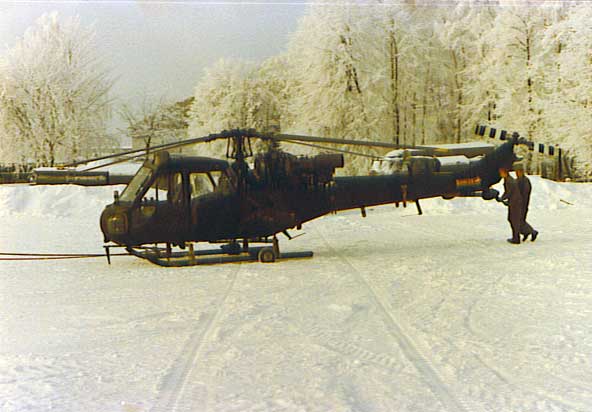 A Scout helicopter in the snow at Detmold, late 1970s (J. Williams, via Andy Ottaway).

Detmold is classified as a Special Airfield under German law, and all air movements are PPR. The old barracks buildings and hangars have been converted to civilian use, 13 Ground School was converted into a kindergarten. Other buildings are either empty, or have been converted into businesses and homes.
As part of the EXPO 2000 exhibition in Hannover, one hangar was converted to the 'Art Kite' museum exhibiting a number of kites. The museum was eventually closed in 2005, however.
The old World War II tower, in use as an Officers' Mess during the Cold War now serves as a police station. 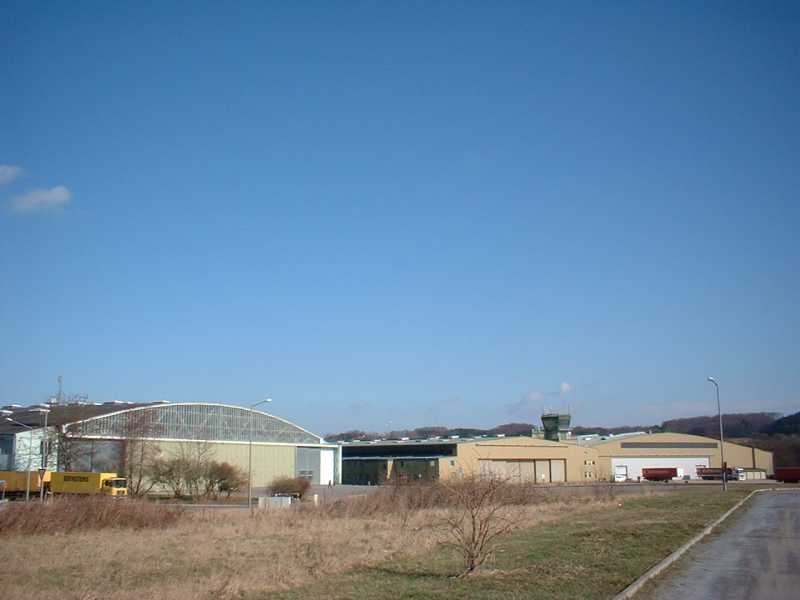 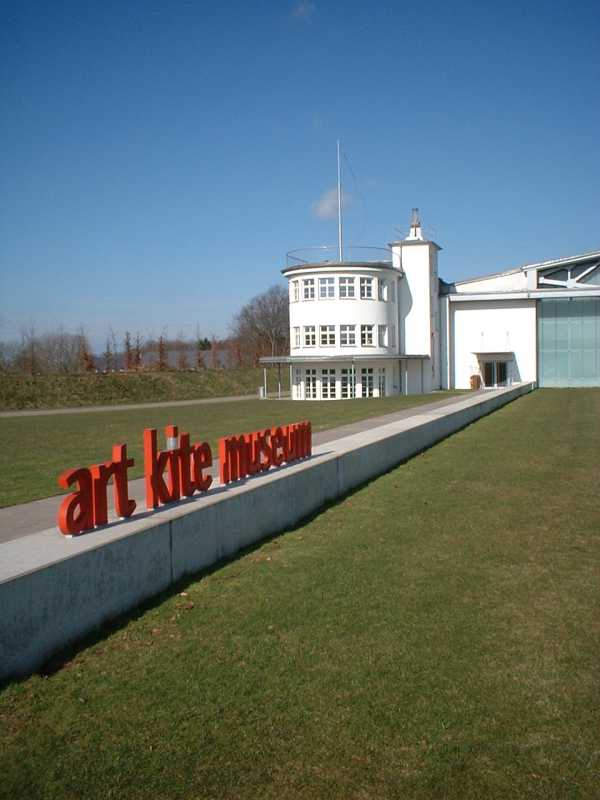 The kite museum at Detmold airfield in 2004, seen from the flying field (photo kindly supplied by Volker Böhme) 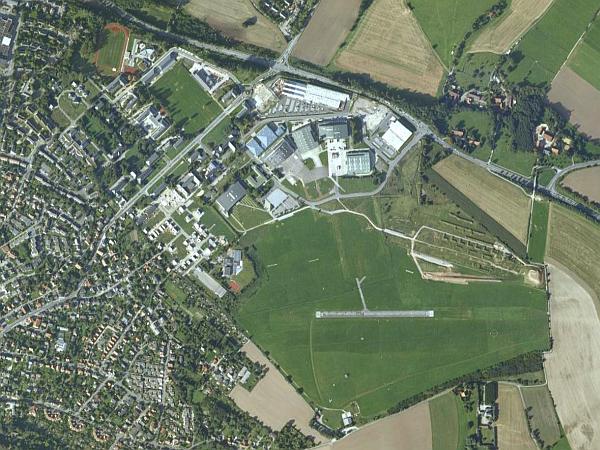 Detmold airfield ca. 2006, showing the proximity of the airfield to the city of Detmold (Google Earth).