The military airbase was built as part of the huge modernization program of the Bulgarian Air Force, intended to allow converesion into the jet age. The 18th and 43rd Fighter Air Regiments of the 4th Fighter Air Division transferred to the base, having formed two years earlier at Vrazhdebna airfield. At the time, the two regiments operated the Yak-9M/P fighter and a small quantity of Yak-11 fighter-trainers. Shortly after the transfer, on 17 May 1952, a major boost in the units' operational capabilities was achieved with the introduction of the Yak-23 and Yak-17U - Bulgaria's first jet fighter type - into operations. Although replaced by more modern jets, a group of Yak-9s remained on quick reaction duty until 1954.
1955 saw the 18th Fighter Air Regiment converting to the MiG-15 and four years later to the MiG-17F. The 43rd Fighter Air Regiment flew the MiG-15 from 1956 until its disbandment in 1960.

The 1st Squadron of the 18th Fighter Air Regiment transitioned to the supersonic MiG-19S/P in 1963. The following year saw a group of the regiment's flight officers being dispatched to the USSR for an operational conversion course to the even more advanced MiG-21 fighter. Upon receiving 12 examples of the MiG-21PF, 2nd Squadron was transferred to Gabrovnitsa air base in the country's northwestern area. After an upgrade in 1969, the regiment's MiG-19P were brought to a standard, which allowed them to carry two K-13 Air-to-Air missiles with IR-homing.
In 1975 the 1st Squadron transitioned to the more potent MiG-21MF fighter. They were declared fit for operational readiness the following year, under squadron commander Georgi Ivanov Kakalov, the country's first cosmonaut.
A major rearmament program of the Bulgarian Air Force, started in the 1970s, saw the squadron converting to a even more potent fighter type, when a group of pilots and ground engineers went to the Operational Conversion Center at Lugovoye, Kyrgyz SSR (Soviet Union) for a conversion course to the MiG-23MF in 1978. On 10 October the first of 12 MiG-23MFs and 3 MiG-23UMs arrived at Dobroslavtsi. The aircraft's ability to intercept enemy machines unnoticed using IR sensors and the armament of R-23R/T BVR Air-to-Air missiles in addition to the new R-60 short-range Air-to-Air missiles, made the Bulgarian Air Force among the best air arms in southeastern Europe. During Warsaw Pact's major scale maneuvers in the 1980s, Bulgarian MiG-23s were even able to intercept Soviet MiG-25 reconnaissance aircraft entering Bulgarian airspace from Romania and flying at speeds of Mach=2.5+ and altitudes of 20000+ meters.
In 1982 the 18th Fighter Air Regiment's 3rd Squadron was disbanded. The unit had for a long time been the air defence force's operational training unit for fighter pilots. The tactics needed for air defence tasks were obtained by the newly trained pilots and a required number of flight hours was achieved by them before transferring to a front-line squadron of the 1st or 2nd Air Defence Divisions. The same year 8 MiG-23MLAs were received by the 1st Squadron, this new variant being able to fire R-24 advanced BVR-missiles. 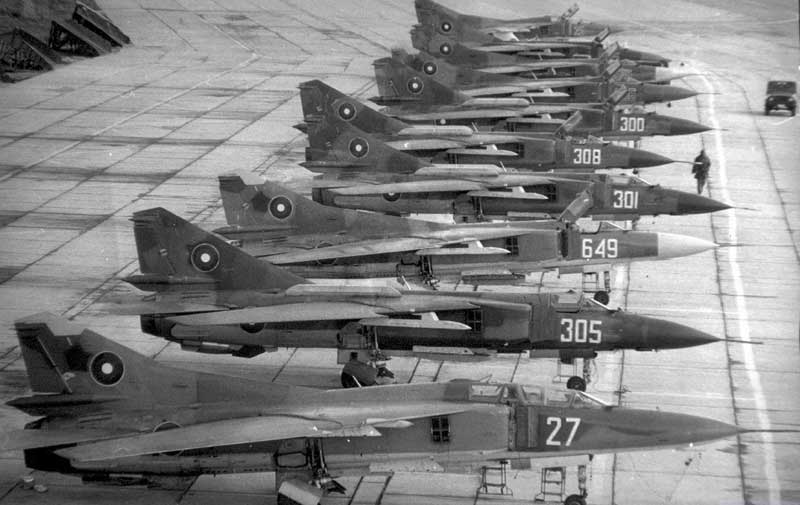 Undated but believed to be late 1980s photo of MiG-23s at Dobroslavtsi Air Base.

At the end of 1991 the last MiG-23s acquired by Bulgaria were delivered to Dobroslavtsi. The aircraft were second-hand MLDs of the specially developed sub-variant for countering F-15s and F-16s. The five units saw action in Afghanistan and were originally delivered to the 168th Fighter Air Regiment of the Soviet Air Force. The delivery was part of a deal struck with Moscow for the 3 remaining Bulgarian MiG-25s.

The economical difficulties of Bulgaria after the end of the Cold War led to a rapid decline of flight activity and operational readiness in the 1990s. In 1994 the 18th Fighter Air Regiment was disbanded and the 1st Air Defence Base was formed, comprising the 1st Fighter Air Squadron ("Knights of the Sky") and a number of ground units, supporting the squadron's flight operations. In 1998 the aircraft and personnel of the regiment's former air base at Gabrovnitsa (reformed as 2nd Air Defence Base with its squadron "Wild Cat") ceased operations and were transferred to Dobroslavtsi. So the 1st AD Base acquired its MiG-23MLDs and UBs. However, in accordance with "Reform Plan 2004" of the Bulgarian armed forces the base was disbanded in 2002. 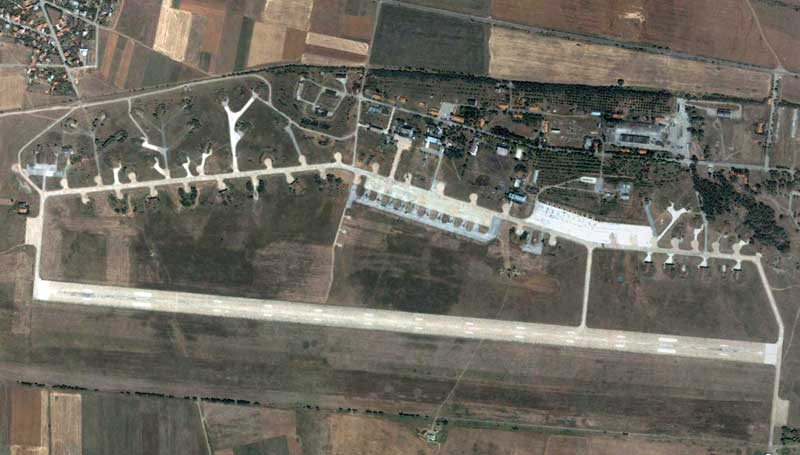 Dobroslavtsi Air Base in 2000 when it was still an operational MiG-23 airfield (Google Earth). 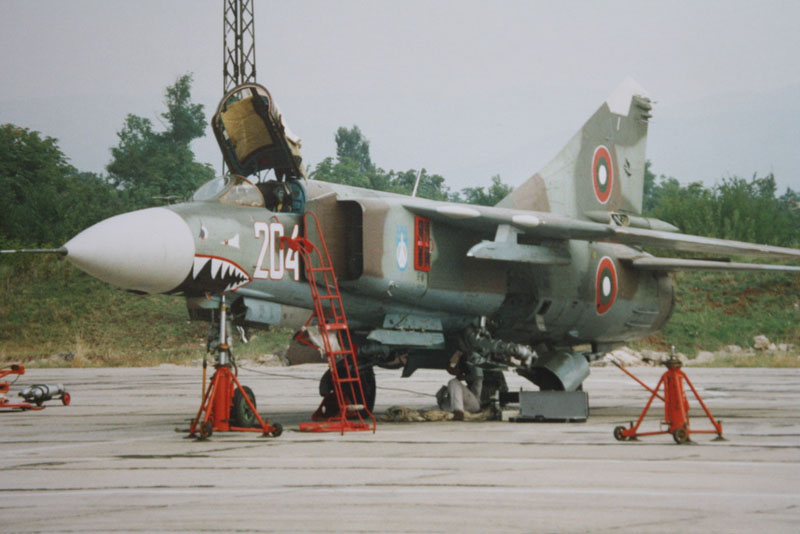 One of the last European 'Floggers' to be operational, undergoing maintenance on the line at Dobroslavtsi in 2002 (airshows.co.uk) 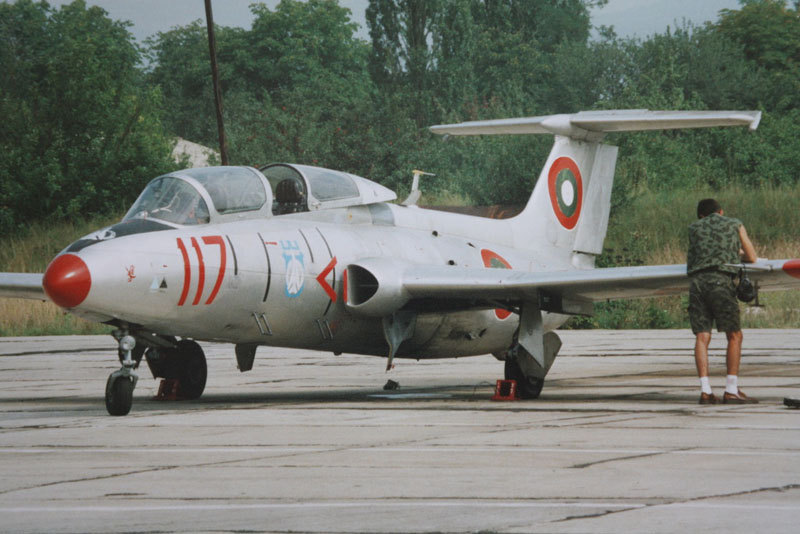 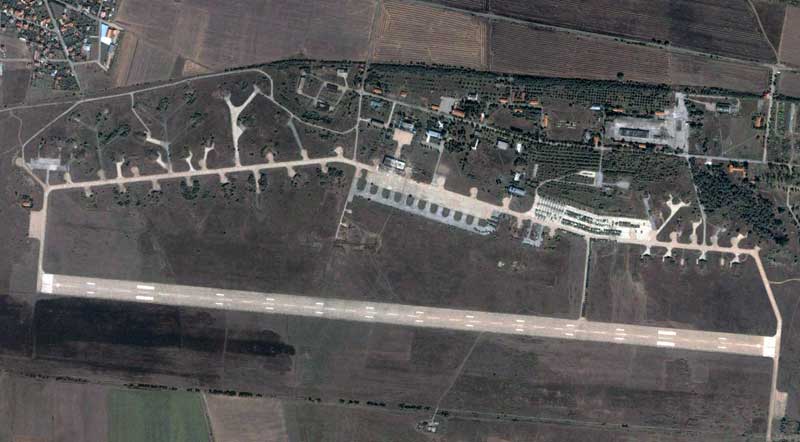 Rows of stored aquipment, including MiG-23s, can be seen on the eastern platform in this 2004 photo of the air base in 2004 (Google Earth). 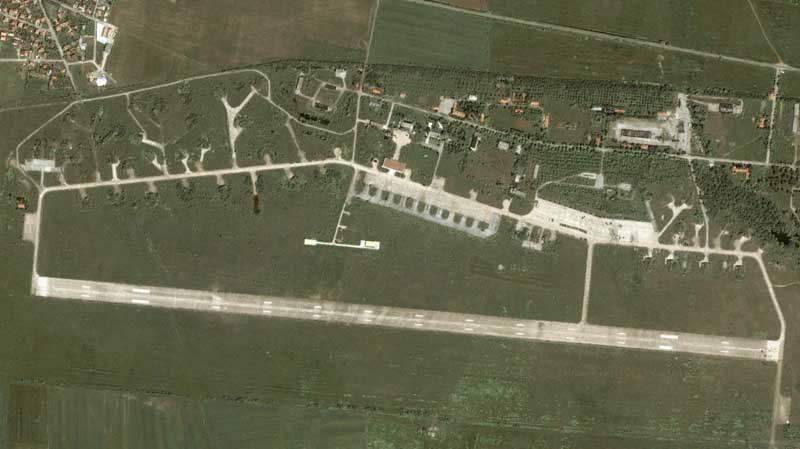 Most of the platform was empty when this photo of the airfield was shot in 1008 (Google Earth). 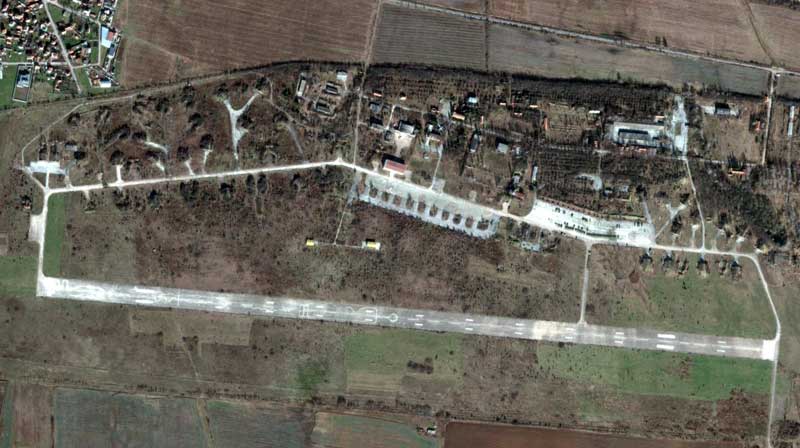 Dobroslavtsi air base in 2014. Clearly some activity is still taking place at the former airfield, as the platform has rows of equipment placed on it again (Google Earth).

Although still military property, currently the base is disbanded with the only activity being guarding duty of the remaining equipment stored at the field.
contact us about this airfield