Airfield Doetinchem (Dutch: vliegveld Doetinchem, also known as vliegveld Groenendaal or vliegveld Misset) was an airfield 105 kilometer east-southeast of Amsterdam.
It was founded by one of two owners of the Misset printing company of Doetinchem and opened in April 1936. The airfield was a minor player, being home to only 4 aircraft: C. Misset's own Koolhoven FK43 PH-CMD, National Flying School owned Pander PH-AIB, a Cierva (PH-HHH) and KLM owned Fokker F.VII PH-ACJ. Additionally the airfield hosted a glider owned by the Doetinchem Glider Club.
The airfield did not have a runway, but was located on a flying circle, allowing starts into any direction the wind would be blowing.

Pander PH-AIB taking off and (presumably) Koolhoven FK43 PH-CMD on the ground in this postcard of airfield Doetinchem-Groenendaal before World War II. 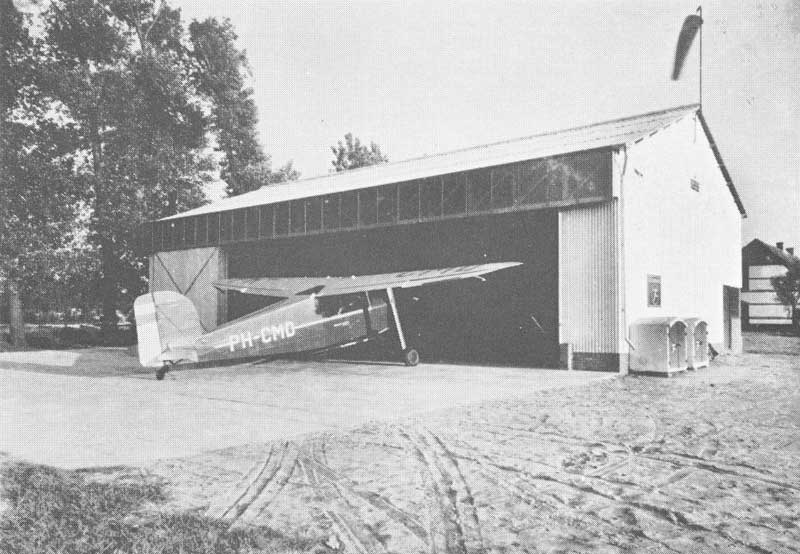 The airfield, like most other airfields at the time, was closed by the Germans after the invasion of May 1940. Around 1941 however it reopened, because in that year it became the airfield for the German company Diederich Flugzeugbau from Emmerich (just across the border). This company had previously taken over the Dutch wood working plant Nemaho near the Doetinchem airfield and used it to repair and (re)assemble German aircraft. The airfield got a small Wehrmacht detachment and ownership of the airfield was officially taken over by the Germans in 1943.
Aircraft from the Nemaho plant were Schulgleiter-3 (SG-3 gliders, built by Pander in the Hague), DFS230 assault gliders of the German airborne forces and Bucker Bü131 Jungmann double deckers (built by Fokker in Amsterdam). Repaired Bucker aircraft were test flown from the airfield by a Fokker test pilot, the German Emil Meinecke (Fokker facilities and personnel were used by the Germans throughout the war). The plant produced high quality repairs, which resulted in the RLM (Reichsluftfahrtministerium - State Aviation Ministry) concluding that the "industrial way of working" was very effective, of higher quality than other workshops, resulting in repaired aircraft that would normally have been written off. From order numbers it can be concluded that close to 350 DFS230's and about 100 Bücker Jungmanns must have come through Diederichs.

The activities at the airfield ended around the invasion of the Netherlands through Operation Market-Garden in Septmber 1944, when repairs of aircraft were replaced overnight by repairs of German trucks and lorries. Presumably as a result of increasing activities for the Wehrmacht, the airfield, the plant and the town of Doetinchem were bombed 3 times by the RAF from September 1944. The final repaired aircraft left the airfield as late as February 1945.
On Monday morning the 19th of March 1945 30 RAF Typhoons appeared over Doetinchem. Coming from the airfield at Mill, the attackers levelled the Diederich Flugzeugbau facilities.
Between 12 and 17 April 1945, the airfield was briefly used by Austers of 661 AOP Sqn of the RAF, coming from Grave. On 16 April, Austers og 657 AOP Sqn arrived from Gilze-Rijen. They flew on to Otterloo on 21 April.

After the war the airfield did not reopen, as the Misset family name (and therefore their businesses) was alledgedly intimately connected to the Nazis. Mr. C. Misset and his family were arrested on charges of collaboration. His unmarried brother Henk remained free, but died of diphteria in September of 1945.
The issues with C. (Cees) Missets actions during the war were never proven, but the discussion lasts until today, as Mr. Misset was a very philantropical person and well liked amongst the average population of Doetinchem. Besides founding the airfield he was responsible for the founding of the city swimming pool, a sportscomplex and a fund for poor people that could borrow money for their first home at very low rates. For his efforts for the region, he had reveived Royal honours before the war.

The airfield remained visible until at least the summer of 1953, when Dutch Touring Club Magazine "De Kampioen" (in Dutch) reported seeing its flying circle on an overflight from Maasticht to Teuge.
The airfield does not exist anymore, but the Misset printing company became part of the Reed-Elsevier company, and exists to this day. Nehamo, builders of wooden hangars during the war, was rebuilt after the war and continued until 2009.
Today, the terrain (now known as De Ruige Horst) has two football fields on the east side and a nature preserve on the opposite side.

Only of interest if you understand the Dutch language: The Dutch company Oasem Media & Events BV has some videos (look for "Meneer Kees en meneer Henk", 4 parts ) on the Misset brothers.