Driffield airfield (RAF Driffield, also known as Eastburn Landing Ground) was an airfield 280 kilometeers north of London.
The airfield was first built in 1916 as a base for Royal Flying Corps FE2b aircraft. They were tasked with intercepting German Zeppelin airship raids on England. Although a flight of 33 squadron was stationed at the airfield, they never managed to intercept and attack one of the raiders. The following year Eastburn (as it was then known) was selected to become a proper military air station. It was to be used by 3 and 27 Training Squadrons, which later formed 21 Training Depot Station. Several wooden buildings, including hangars, were erected to house the units.
The aerodrome was closed in February 1920 and eventually most of the wartime structures were demolished.

When the RAF began to expand in the 1930s, the old World War I aerodrome sites were first to be reviewed for the reconstruction of permanent stations. Eastburn was no exception and in 1934 the lands were reacquired. Immediately coonstruction on what was to be known from then on as RAF Station Driffield began. It received a logistics camp on the east side, constructed in brick, flat roofed and centrally heated. The arc of Type-C hangars, typical of the expansion period, comprised four hangars, with a fifth somewhat hidden behind them on the right. Although Driffield officially opened in July 1936, the airfield had been not completed enough to allow operations. Therefore, its first squadrons only moved in two months later.
Driffield became a Bomber Command airfield, occupied by 58 and 215 Squadron, flying Vickers Virginia bombers under control of No. 3 Group. However, when 4 Group was formed in April 1937, Driffield was taken over by the new Group.
The RAF expanded rapidly, and 215 Sqn's 'B' flight was used to form 75 Sqn. 58 Sqn had to move off the airfield in early spring 1937, only a few days after its 'B' flight had been used to form 51 Sqn. Driffield not large enoough to house 4 squadrons, both 51 and 58 had to move out to RAF Boscombe Down. The remaining squadrons converted to the Handley Page Harrow in by the end of the summer of 1937. A year later, the squadrons were 'traded' to RAF Honington to consolidate bomber types with No. 3 Group.
The former Honington units came to Driffield: 77 Sqn flying Wellesleys and 102 with Heyfords. Before the year was over both converted to Armstrong Whitley IIIs, however.

No photos predating World War II have been located

Driffields role in World War II began on the night of 4-5 September 1939. Three sorties to the Ruhr were  made to drop leaflets, more lethal cargo was not carried until 1940.
Although many single aircraft attacks had taken place at Bomber Command airfields, Driffield became the victim of the first concentrated formation bombing. On 15 August 1940 a large formation of KG30 Ju88 bombers raided the airfield, scoring 171 direct hits, causing 14 deaths and the destruction of 12 Whitley bombers. Several other bombers, as well as buildings were damaged, and the airfield was put out of action for several days. When the airfield was sufficiently repaired, both squadrons moved their remaining aircraft to RAF Linton-on-Ouse (77Sqn) and RAF Leeming (102 Sqn). Over the next few months, there was no operational activity at the airfield. Dummy aircraft and vehicles were placesd at the airfield to pretend nothing had really changed, in order to keep attention to the airfield and away from other stations. However, Driffield was not attacked again in force.

Oblique aerial view of part of RAF Driffield, Yorkshire, in the winter snow, showing the five Type C hangars fronting the bombing circle and other buildings on the technical site. Armstrong Whitley Mark Vs of No. 77 Squadron RAF are parked on the airfield in front of the hangars. Note the number of saplings recently planted around the hangars and buildings to provide camouflage. ( © IWM  Royal Air Force Bomber Command, 1939-1941 (HU 91931) )

Three Armstrong Whitworth Whitley Mark Vs take off on a leaflet-dropping ("Nickelling") sortie from Driffield, Yorkshire. In the foreground is Whitley V, N1380 'DY-R', of No. 102 Squadron RAF, surrounded by service personnel and visiting journalists. This aircraft may have been the first aircraft to deliberately drop bombs on Germany when it took part in the important raid on Hornum on the night of 19/20 March 1940. ( © IWM Royal Air Force Bomber Command, 1939-1941 (C 927) ) 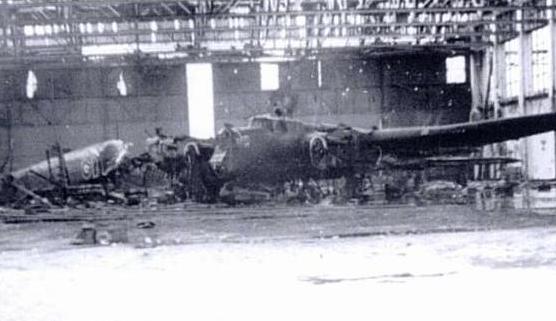 Very blurry photo of the damage done to Driffield after it had fallen victim to the first coordinated German airstrike in August 1940 (thedaysofglory.blogspot.com).

In early 1941 Driffield was returned to operational use, but this time as a fighter station. 213 Sqn and 1 (RCAF) Sqn Hurricanes, along with RNZAF Spitfires of 485Sqn used the airfield before No.4 group reclaimed the airfield in Spring. 104 Sqn reformed at the airfield with Wellington bombers and went to battle in early May. A second squadron (405 Sqn) was manned by RCAF personnel, the first Canadian Bomber squadron in Bomber Command. They went to battle in mid-June, but moved to RAF Pocklington a few days later. In the Fall of 1941 104 Sqn was sent to the Mediterranean to reinforce Malta. A small part that remained at Driffield became the nucleus of the new 158 Sqn in February 1942. The squadron moved to RAF East Moor in June for conversion to Halifaxes. It then remained quiet at Driffield, as no units were assigned to the airfield until autumn, when 466 Sqn (RAAF) was formed in October, followed by 196 Sqn in November. Both became operational at RAF Leconfield, where they had moved to allow construction of Driffields new hardened runways. The airfields boundaries were extended to the west, and three new runways were built. Of the pan-type parkings that were built in 1940, 30 were retained and 10 loop-type were built along the new perimeter runway. New facilities included a new bomb store and accomodation for 2300 personnel. The entire reconstruction took a year and a half, so the airfield did not reopen until June 1944. 466 Sqn (RAAF) returned to the airfield and provided the core for a reformed 462 Sqn (also RAAF) from mid-summer. Both squadrons operated alongside each other until the end of 1944. 462 Sqn then moved to 100 Group for bomber support operations at RAF Foulsham. 466 Sqn flew its last bombing raid two weeks before the end of the war, which was also the last raid from Driffield. In total the airfield had lost 87 aircraft due to enemy action or crashes in the UK: Whitleys, Wellingtons and Halifaxes.

On VE-Day 466Sqn was transferred to Transport Command for transport duties. Later that month they were joined by 426 Sqn (RCAF), which began converting to cargo configured Liberators before moving to RAF Tempsford only one month later. By the end of summer, 466 Sqn, supplemented by 10 Sqn (RAAF) crews, moved to RAF Bassingbourn. Driffield was put on Care & Maintenance almost immediately.
C&M lasted for only one year though, because Flying Training Command took over the airfield in the fall of 1946. They installed a navigation school and the station supported various training units until September 1955. That month Fighter Command took over and stationed Venoms at the airfield. They remained for two years, and the Fighter Weapons School remained half a year longer, leaving in March. In October 1958 the airfield became the Thor missile formation headquarters. The unit closed in June 1963 however, putting the airfield back into Care & Maintenance.
In essence the occupation by the RAF had ended. Flying did not completely cease however. The nearby Hawker-Siddely plant had its runway at the former RAF Holme on Spalding Moor reworked, and therefore needed an alternative for the test flying of new Buccaneer strike aircraft. They diverted to RAF Driffield to perform their tests.
An exercise of Transport Command brought a fairly large number of Hercules and Argosy transports to the airfield between 9 and 16 December 1969. Something similar occurred when RAF Linton-on-ouse had its runway resurfaced, and 642 Volunteer Gliding School needed a runway in the early 1970s. 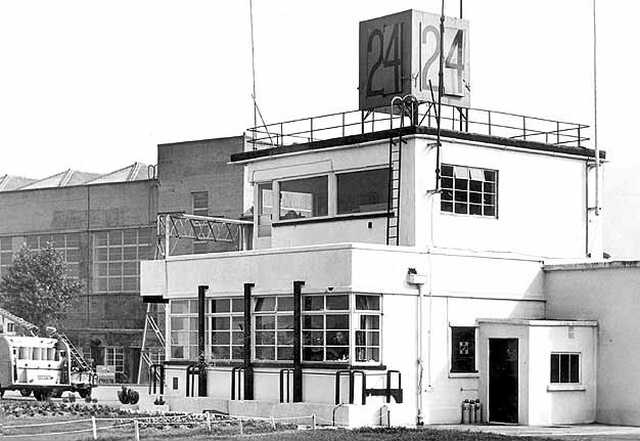 The tower at RAF Driffield as photographed in 1955 (controltowers.co.uk). 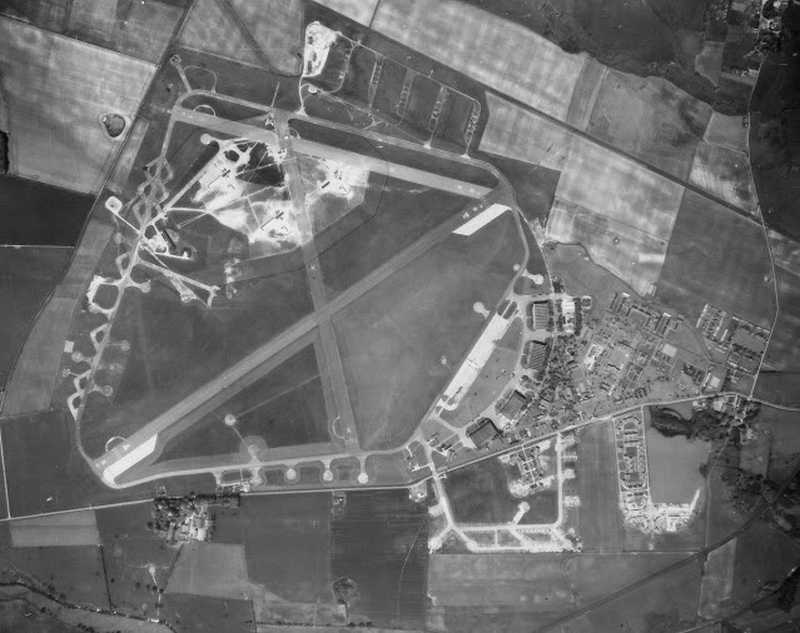 Aerial photo of RAF Driffield. White X's mark the airfields runways as closed, suggesting this photo was shot in the 1970s.  Faint outlines of a C-130 Hercules appear to be visible on the platform however, suggesting the airfield was still under RAF control (photo via derelictplaces.co.uk).

The RAF handed the airfield to the Army in 1977, who renamed it 'Alamein Barracks' and used it as a driver training center. They used the airfield until they finished converting RAF Leconfield for use as a driving school. The runways were removed in the early 1980s, and the resulting hardcore was used in the construction of the Driffield bypass.
The control tower and air raid shelters were demolished before 1976, while its hangars were used to store government surplus grain. Ownership of the airfield was returned to the RAF in 1992. It was renamed RAF Staxton Wold - Driffield Site. RAF ownership did not last long however, in 1996 all personnel and equipment were withdrawn to RAF Staxton Wold.
The hangars are now occupied by industry, the logistics site is otherwise abandoned and quite popular with urban explorers. The former flight area is still in service as a driving area by DST Leconfield. An attempt to sell the remaining property ended in 2000, when the government withdrew it from the market. The former airfield in 2007 (Google Earth)