East Kirkby airfield (also known as Royal Air Force Station East Kirkby or RAF East Kirkby) is an airfield 185 kilometer north of London.
It was originally a decoy airfield for RAF Manby and because it was supplied with several decoy aircraft (dummy Armstrong Whitworth Whitleys) it was bombed by the Luftwaffe several times. Reonstruction into a proper airfield began in 1942 and the completed airfield opened on 20 August 1943 as a Class A RAF Bomber Command Station East Kirkby with 27 pan- and eight loop-type aircraft parkings. The first unit to move in (that same day) was 57 Sqn with Lancaster bombers. The squadron had to move out of Scampton due to the construction of the latters hardened runways.

Out of 57 Sqn's 'B'-flight, 630 Sqn was formed on 15 November 1943 and the new squadron immediately went to war: in the night of 18-19 november 9 of their Lancasters took part in a raid on Berlin.
On 4 March 1944 East Kirky suffered its last enemy raid when the Luftwaffe performed a low-level machine gun atteck and on 15 April 1944 the headquarters of 55 Base was established, tasked with the control of the airfield and the satellites Spilsby and Strubby.
On 17 April 1945, almost at the end of World War II, a 57 Sqn Lancaster was being loaded with bombs when a fully armed 1,000 pounds (450 kg) bomb was (alledgedly) unintentionally dropped onto the tarmac. Because the bomb had had its fuse already inserted it detonated, setting off the rest of the Lancaster's bomb load. A massive explosion killed three airmen, injured 16 others, wrote off six other Lancasters beyond repair and badly damaged a nearby aircraft hangar.
The final wartime raid from East Kirkby was flown on 25 April 1945. In total, 212 operations had been carried out during the war, from which 121 Lancasters did not return. Another 29 aircraft had been lost due to operational crashes or accidents. 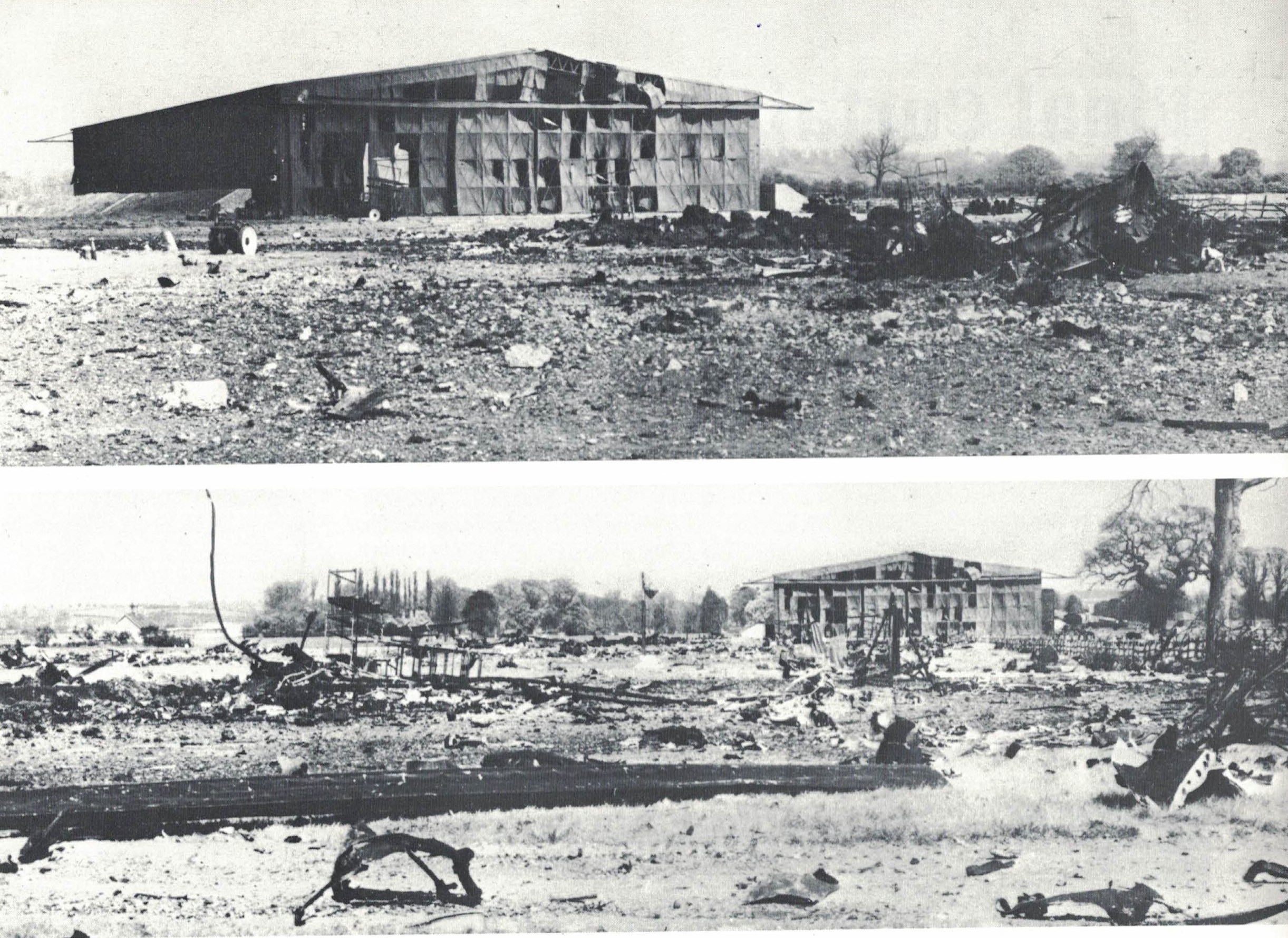 630 Squadron disbanded on 18 July 1945 and its place was taken by 460 (RAAF) Squadron from RAF Binbrook from 27 July. This squadron joined 57 Sqn for transfer to the Far East as part of 5 Group's Tiger Force. A few days (23 July) before 57 Sqn had already been equipped with Avro Lincoln bombers for service trails with the new bomber. Training was carried out with haste, as both squadrons were planned to be sent tot the Far East. Tiger Force was disbanded however when Japan surrendered in August 1945. 460 Sqn disbanded in October, 57 Sqn disbanded on 25 November (to be reestablished at RAF Elsham Wolds the following day), its Lincolns were taken to Scampton to form the Lincoln Serive Trials Flight. With no flying units left, the airfield closed to flying on 5 December 1945, although the main runway remained open for emergencies. The airfield went on Care and Maintenance on 1 January 1946.
The airfield soon reopened for 139 Sqn and 231 Operational Conversion Unit from RAF Coningsby, which were forced out by reconstruction work at their home base. The work took a year to complete, both units went back to Coningsby and East Kirby went back into Care and Maintenance.

In the 1950s, the airfield was used by the United States Air Force 7th Air Division of Strategic Air Command. To accept the Americans, the 08/26 runway was extended by 3,800ft/1160m and a large parking area. The airfield was reactivated on 17 April 1954. For some time, the base was home to only a station flight with one C-47D Skytrain. Three Air Rescue Squadrons (62nd, 63rd and 64th ARS) were earmarked to operate from East Kirkby, each with specially modified, extra long range C-47s that were to rescue aircrew shot down behind enemy lines. Next to the extra long range fuel tanks, the C-47s were equipped with three RATO bottles and a cargo compartment modified for use as an air ambulance. The squadrons rotated in and out for up to three months at a time for four years. The Americans began to withdraw from the airfield and the station (code name Silksheen) closed on 1 August 1958 and returned to the Air Ministry on 31 October and deactivated on 31 December. Having already largely been returned for agricultural use, it was sold by the government between 1964 and 1967.

As East Kirkby had originally been not only a bomber base, but also a Major Servicing unit, it carried not only the formers three T2 hangars, but also three T2s and a B1 for the latter. When the base closed in 1958 the hangars were quickly dismantled, but oddly enough, the former maintenance area was to become a potato storage in the 1970s, for which four modified T2s were erected on the foundations of the wartime hangars. In the Building boom of the 1970s the runways and taxiways were largely dug up for use as concrete making aggregate. The 1950s runway extension escaped this fate however, allowing it to be used by cropdusters and glider aircraft between 1980 and 2007. 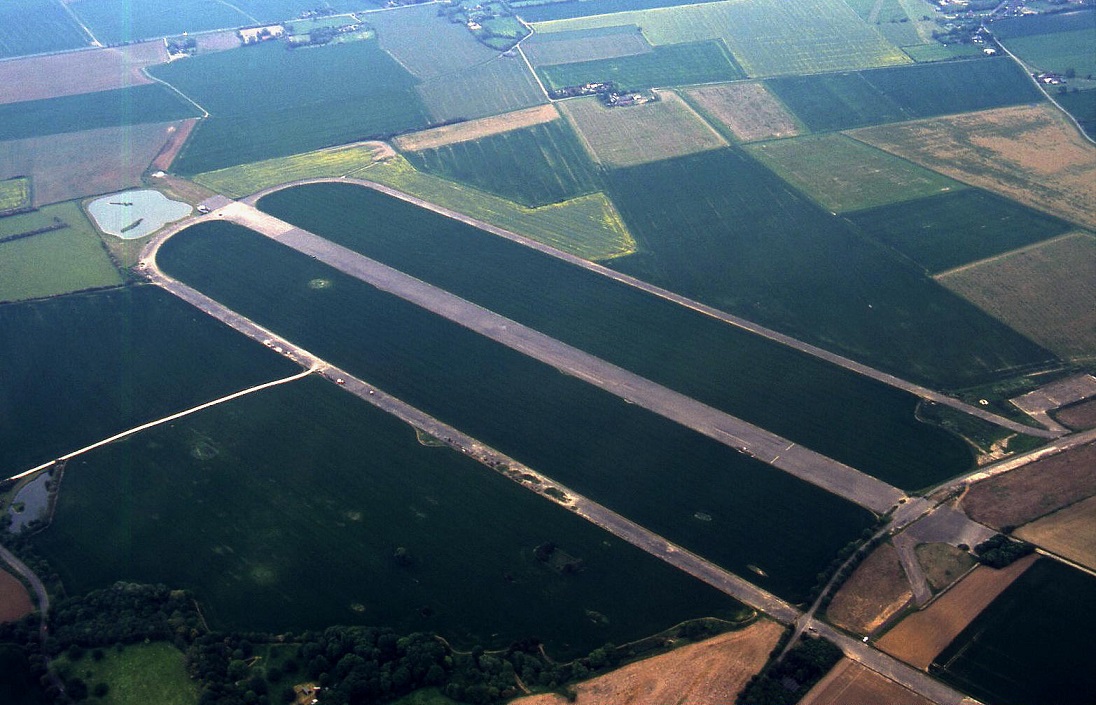 The airfield became the site of broiler sheds and is now also home to an air museum, Lincolnshire Aviation Heritage Centre. The centre's main exhibit is a functional Avro Lancaster Mk.VII, with registration NX611, named Just Jane after the popular wartime comic character. In 2007 the museum opened an unlicensed part-grass and part-concrete landing strip for visiting military and civil aircraft. The airstrip is PPR-only, meaning that no aircraft should land without contacting the museum's owners first. Air traffic control on flying display days is from RAF Coningsby and there is a six-mile "no fly" exclusion zone around East Kirkby on display days. Much of the original runway is still intact today but mainly used by local farmers as hard standing and by model aircraft enthusiasts. Occasional civilian light aircraft have landed on the remaining runway and the airfield allegedly still appears on Civil Aviation Maps as a diversion emergency landing location. 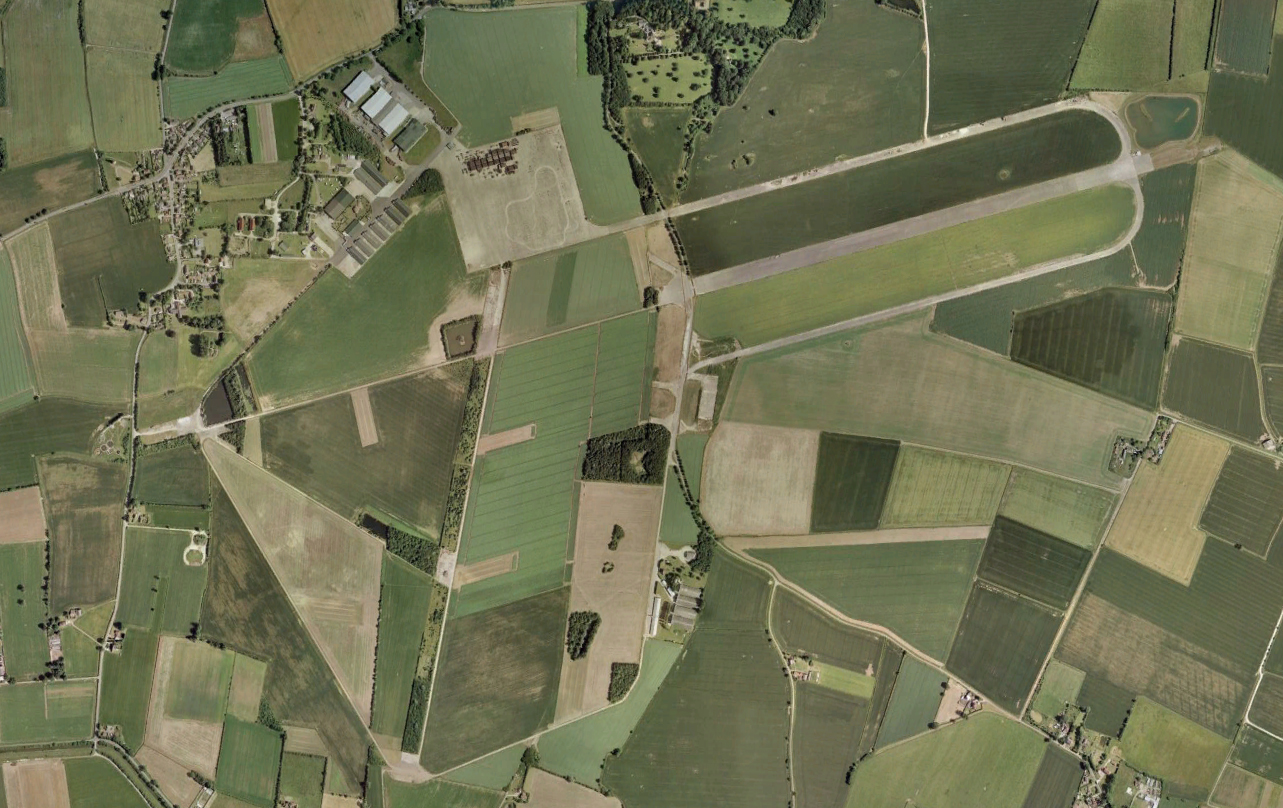 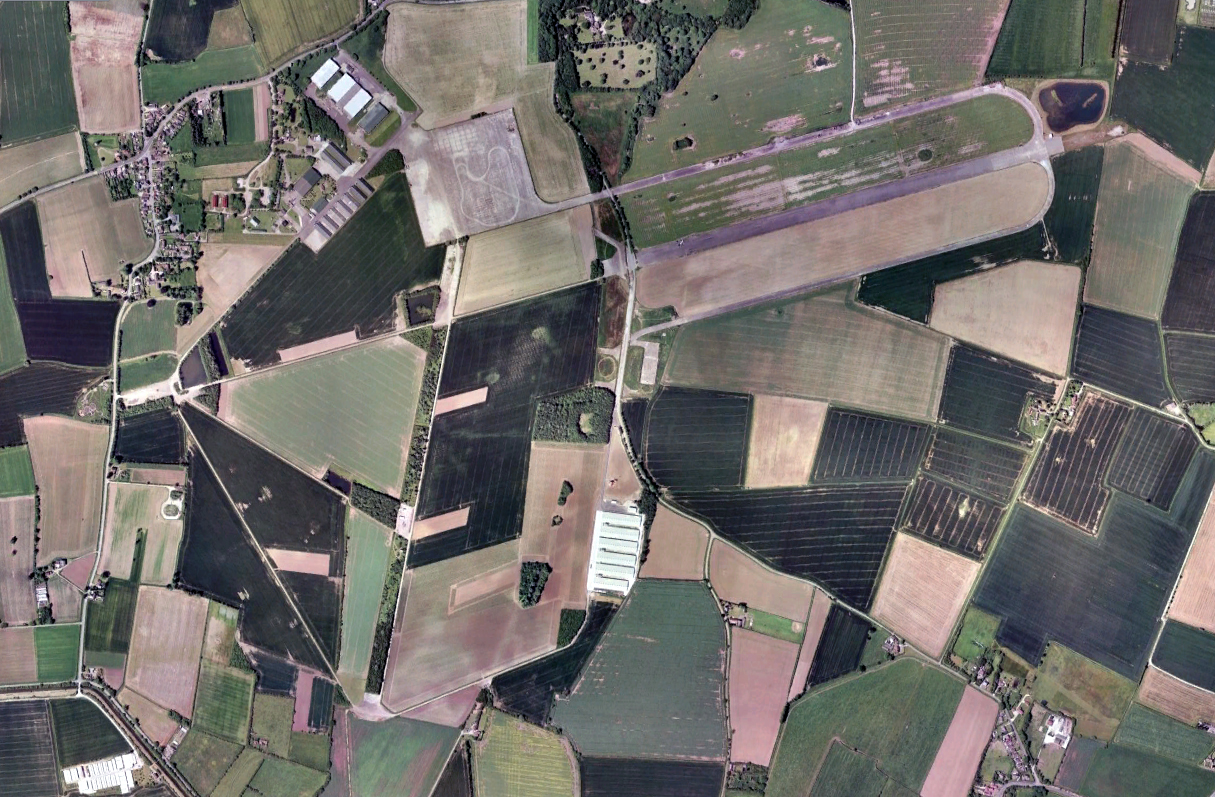 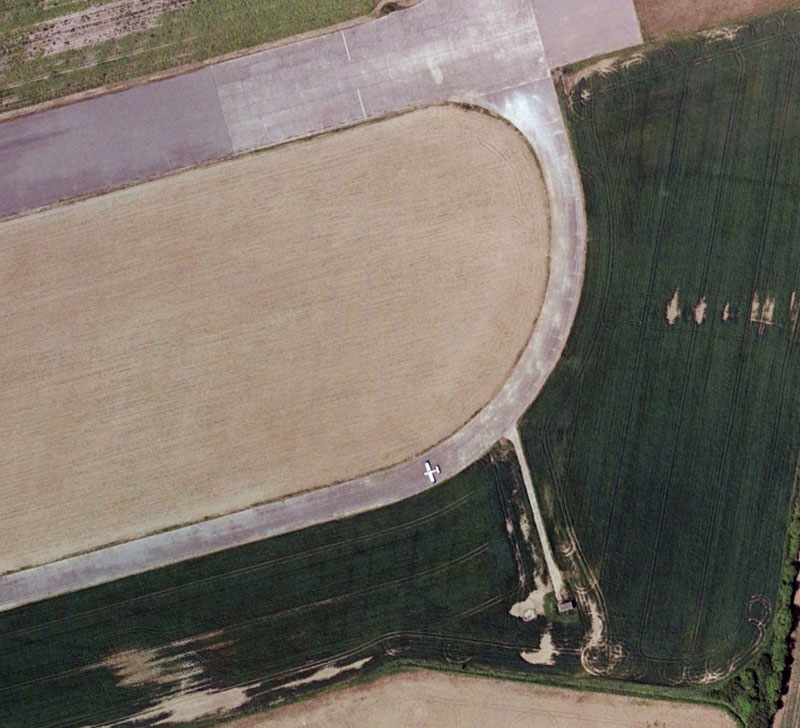 A single engine aircraft on the southern taxitrack in 2005. This photo is an enlargement of the previous Google Earth photo. The control tower survived and the Greenwich meridian passes through the airfield. A memorial to the fallen can be found outside the main gate where the guard house once stood.