*) Kdo. Koch was formed at Kalamaki Jul 1942 from elements of II./KG 100, and opereated with He 111H and Ju 88 aircraft performing night reconnaissance and jamming duties. 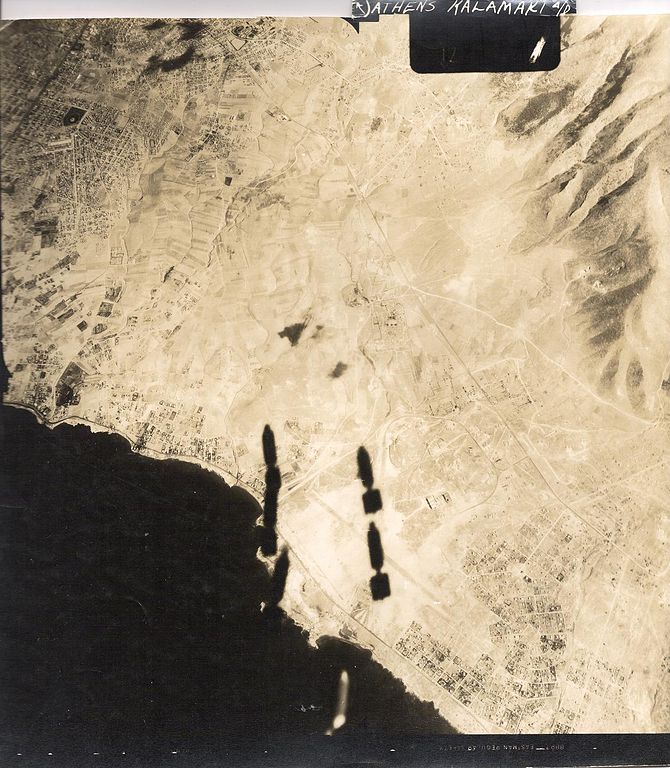 A bomb drop photo from B-17 Flying Fortress 42-31836 ("Pig Chaser") of the 463rd Bombardment Group on 15 September 1944 over Kalamaki Airfield, which at the time was being used by the German Luftwaffe to evacuate their troops from Greece with Ju-52 transport planes (Wikimedia).

After the end of World War II, the Greek government allowed the United States to use the airport. Now known as Hassani Airport, it was used by the United States Army Air Forces from 1 October 1945 as a base of operations for Air Transport Command flights between Rome, Italy and points in the Middle East.
A semi-permanent USAAF presence was established in May 1947 when a facility was built to facilitate Marshall Plan aid to Greece and Turkey. On 5 October 1948 the United States Air Force assigned the Military Air Transport Service 1632d Air Base Squadron to the airport with ten C-47 Skytrain cargo aircraft being based at the airport.
By 1950 the airport was equiped with two runways of 2,250 meters each. Its total traffic had risen to 234,000 passengers. A new control tower was opened in 1951 and by 1954, with the end of Marshall Plan, USAFEs 7206th Air Base Squadron was assigned to the airport.
In 1956 when the airport was turned over to the Greek civil aviation authorities. The airport was renamed Athenai International Airport and the USAF used only a small part of the airport for military cargo use and diplomatic air traffic. The 7206th Air Base Group remained the primary USAF unit at the airport, along with the 6916th Security squadron providing electronic aerial surveillance of the eastern Mediterranean and the Middle East.
In 1957 the airport handled 500,000 passengers and 4,000 tonnes of cargo. To accomodate traffic growth, however, the main runway was extended to 3,500 meters in 1958 - the year jet aircraft were introduced. At the time the airport consisted only of what is today the West Air Terminal.
In 1963, the Finnish star architect Eero Saarinen designed the East Terminal building, which was completed in 1969. From then on, the West Terminal would be reserved for OLYMPIC AIRWAYS exclusively, while all foreign airlines would operate through the East Terminal.
The USAF used the airport for airlift evacuation operations from the Middle East (1967), Cyprus (1975), Ethiopia (1977), and Iran (1979, 1981).
In the early 70's the Airport handled 3,300,000 passengers and 25,000 tonnes of cargo yearly. 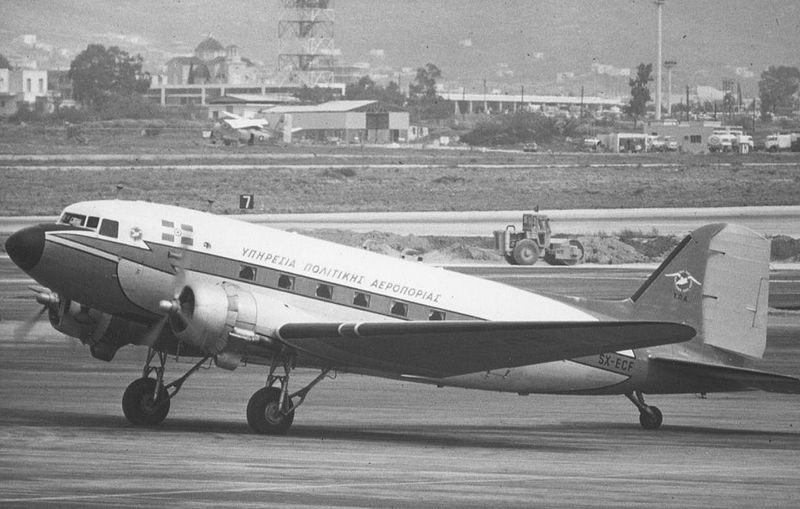 Douglas C-47(R4D-7) SX-ECF of the Hellenic CAA at Athens Hellenikon Airport on 23 April 1973 (Wikipedia). A USN S-2 Tracker/C-1A Trader is visible in the background.

On October 12, 1972 an Olympic Airways airliner crashed in sea while approaching Athens in reduced visibility.
During the 1970s and 1980s, the airport was a major site for accidents and attacks relating to the Israeli-Palestinian conflict. On August 5, 1973 two Palestinian gunmen, claiming to represent Black September, fired on travelers in a crowded TWA passenger lounge, killing five and wounding fifty-five. On September 8, 1974, TWA Flight 841, flying from Ellinikon to Rome, crashed 18 minutes after take-off in what was later determined to be a bombing.
On 25 February 1976 the American part of the airfield was renamed Hellenikon Air Base and provided administrative and logistical support to U.S. units and organizations in Greece, the Middle East, Eastern Mediterranean and parts of Africa.
On June 27, 1976, Air France Flight 139, flying from Tel Aviv to Paris via Ellinikon, was hijacked to Benghazi and Entebbe.
As the Airport had reached its limits in 1976, and nothing more could be done to boost capacity, the Greek Government asked a partnership -including Aeroports de Paris and Frankfurt Airport- to find an appropriate site for the new Athens International Airport.
In a non-terrorism related incident on October 8, 1979, a Swissair flight (a 1967-build Douglas DC-8) flying from Geneva to various cities in the Orient via Ellinikon, landed at night and touched down 740m after crossing the threshold with an airspeed of 146 knots. The airliner went off the end of the runway and crashed on a public road, with the tail and left wing ripped off. In the ensueing fire 14 passengers lost their lives.
On June 14, 1985, TWA Flight 847, flying from Ellinikon to Rome, was hijacked to Beirut and Algiers.
On November 14, 1985, EgyptAir Flight 648, flying from Ellinikon to Cairo was hijacked to Malta.
On April 2, 1986, TWA Flight 840, from Rome to Ellinikon, was bombed, resulting in four people being sucked out of the plane to their deaths. The damaged airliner made a safe landing at Ellinikon. 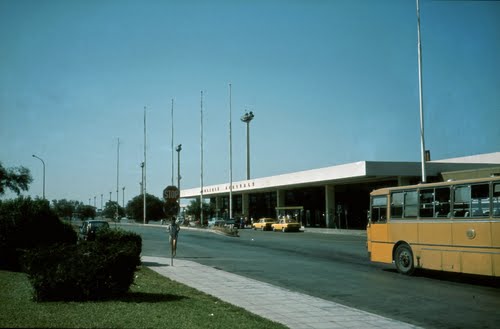 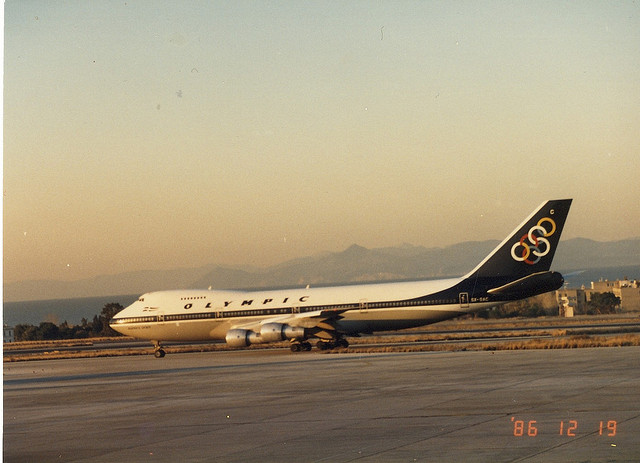 With the end of the Cold War, it was agreed to end the USAF presence at the airport and the United States closed its facilities in 1993. A separate Charter Flights Building was built on the site of the former U.S. military Base in 1994 and by adding another 5,500 square meters to the West Terminal buildings in 1998, capacity was increased even more. This was the final expansion at the airfield, which was now completely congested. A new airfield was ordered to be built in the late 1990s.
It opened on 29 March 2001 and Ellinikos closed as an international airfield that same year, having served 12 million passengers a year. 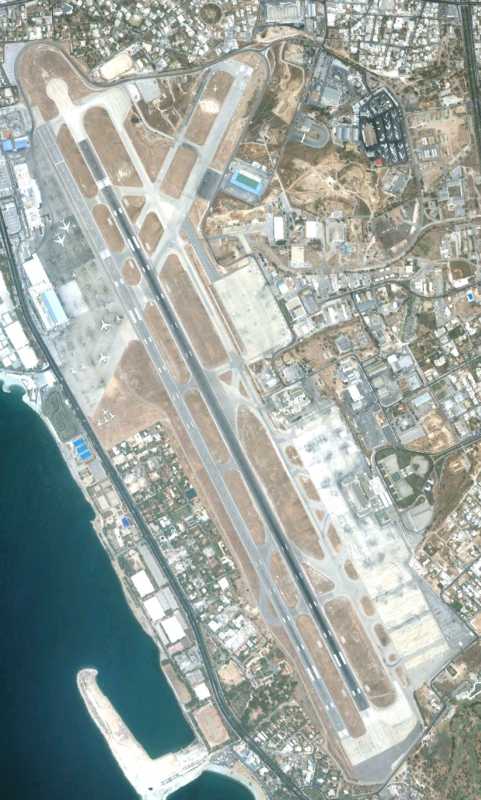 Ellinikos in Dec 2001. Although the international airfield is closed, some aircraft are still visible parked at the airfield, including 4 Boeing 747s and severeal narrowbody airliners on the northwest parking. Dispersed around the airfield are more aircraft: a narrowbody near the old 21 threshold, a propliner on the main platform, and several GA aircraft around the field (Google Earth).

After its closure as an international airfield, the northwest side of the airfield was redeveloped for the 2004 summer Olympics. The runways were converted into a sportspark for field hockey, baseball and softball. One of the hangars was converted for fencing venues and for indoor basketball arenas. Although this changed the northwest part of the airfield, the southeast and other parts of the airfield still existed. During the Olympics the airfield was used by two surveillance airships and a large number of helicopters.
The Athens radar center is still located at the airfield and there is a fair chance the remainder of the runways will be reused for general aviation. 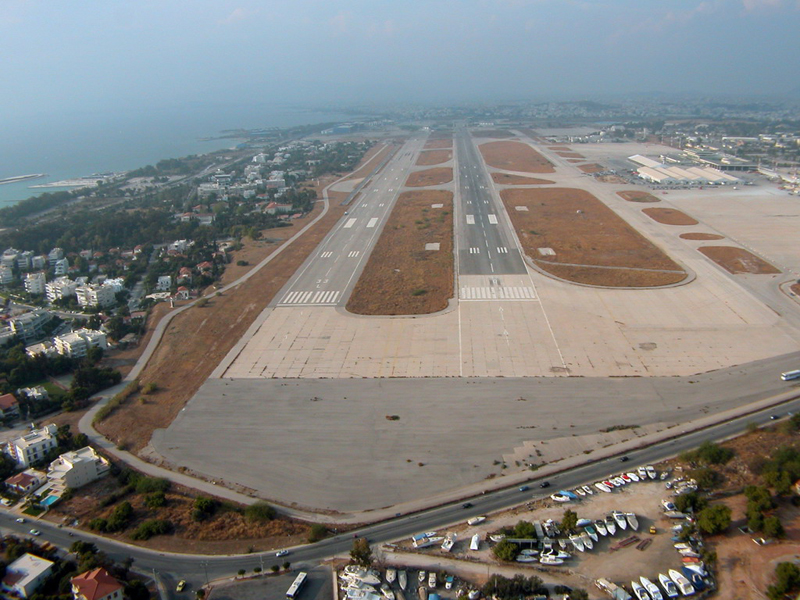 Ellinikos just after redevelopment for the 2004 Olympics began (Kostas Rossidis). 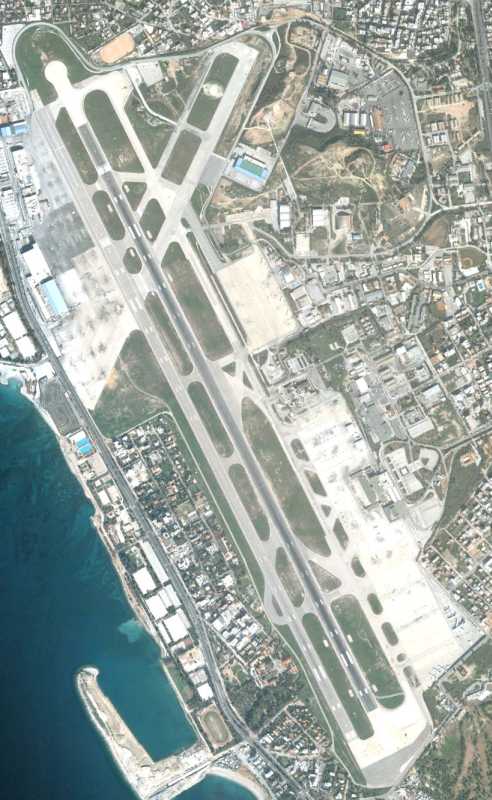 Ellenikos, March 2002. Most aircraft have moved out of the airfield, the remainder is parked on the south platform. There must have been some kind of event at the airfield though, as there are 92 (mostly GA) aircraft and 7 helicopters visible parked on the main ramp. Measuring from the RWY33 threshold (both runways) a thin white line, indicating the end of the runway had appeared at 1200meters/3600ft (Google Earth) 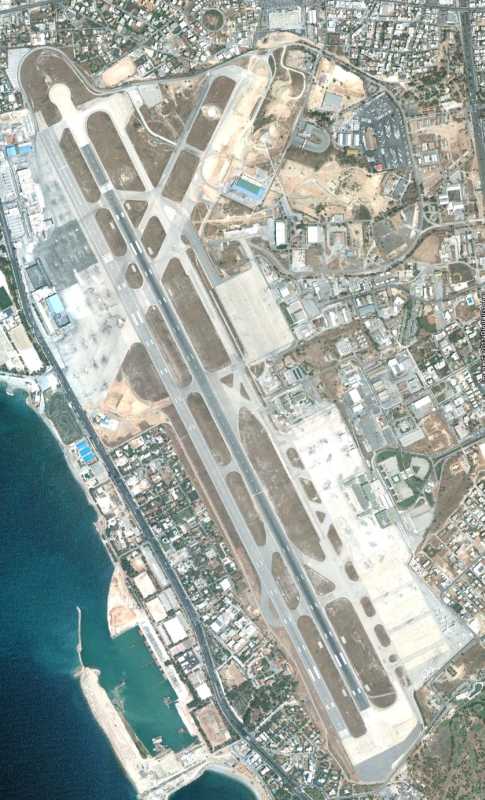 In the summer of 2002 reconstruction for the 2004 Summer Olympics began with the deconstruction of the old RWY 21. Some aircraft were still present on the southeast ramp though. The end of runway marker on 33R had been thickened, and the runway centerline beyond that had been replaced with arrows heading 15 (Google Earth) 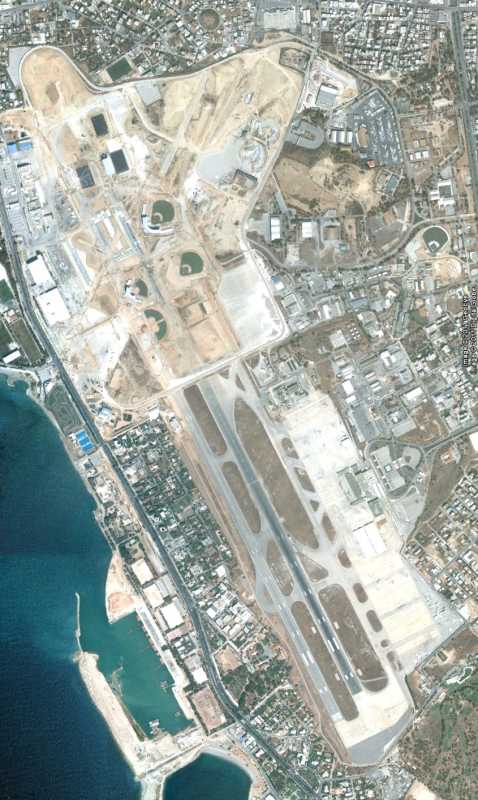 September 2003: Reconstruction of the northwest side of the airfield has picked up speed. Visible are several baseball and softball diamonds, and on the location of RWY21 the White water course is taking shape. There are still a number of aircraft on the south parking, and two hangar sized buildings have appeared at the platform (Google Earth). 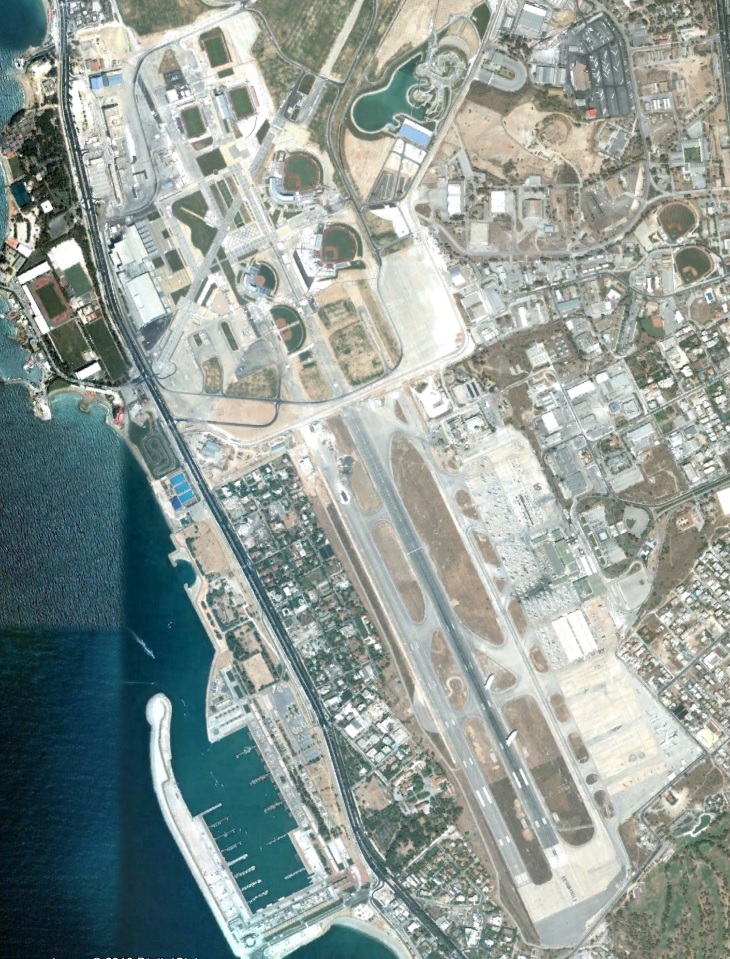 Ellinikos during the 2004 Olympics in August 2004. The central platform had been converted into a large car parking and two airships can be seen on rwy 33R (Google Earth). 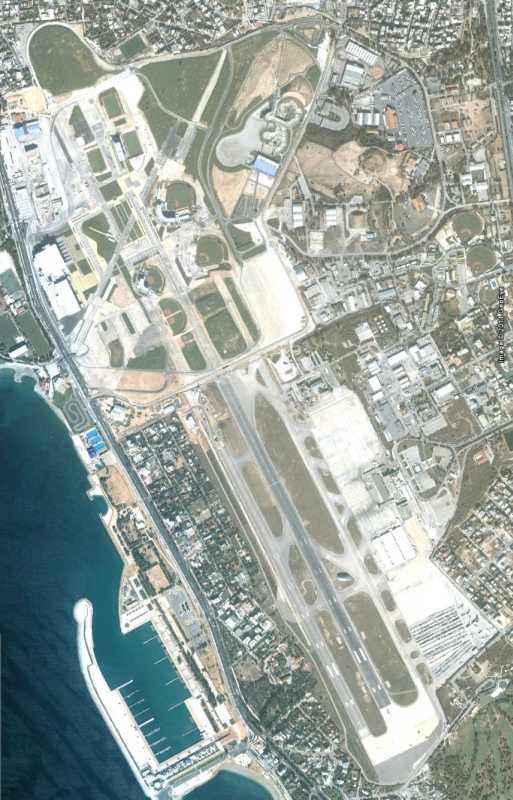 Ellinikos two months after the Olympics (Oct 2004) shows the south aircraft platform in use as a large carpark and a single airship on the 33R runway (Google Earth). 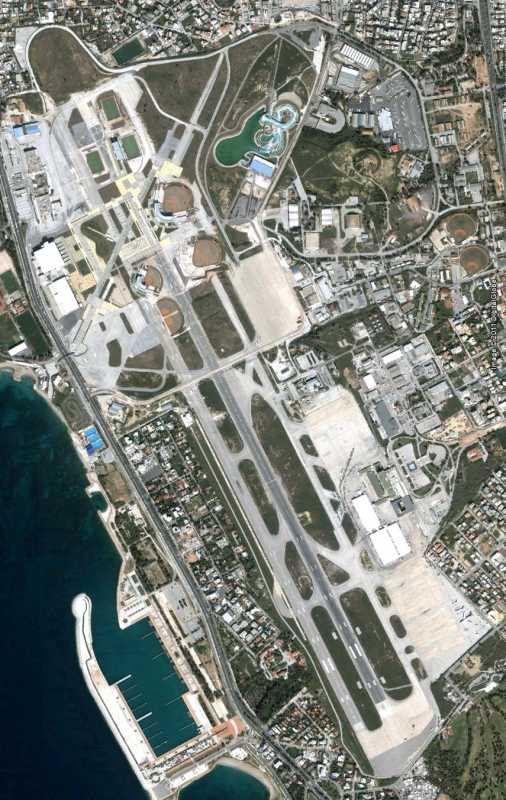 In March 2007 a number of circuit-like lines had appeared on both runways. The DC-3, which had not moved in years until after the Olympics, had disappeared, and the central platform was again being used as a carpark (Google Earth). 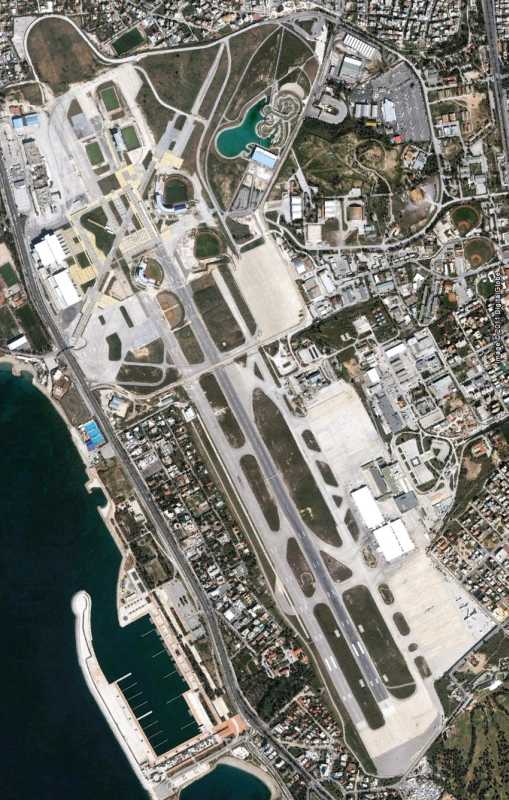 The images of March 2008 and March 2009 are not much different. Only difference is that in 2009 the three GA aircraft had been moved from the fence to much closer to the museum aircraft. 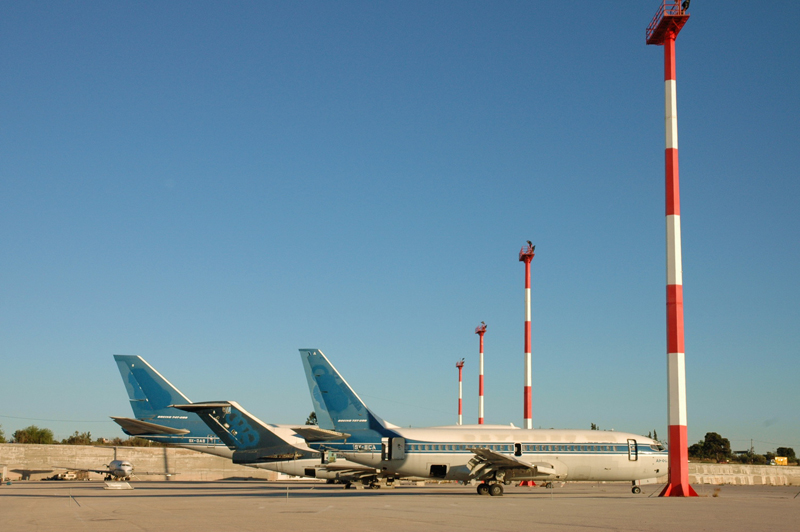 Three former Olympic Airways aircraft, Boeing 727 SX-xxA, Boeing 737-200 SX-BCA and Boeing 747-200 SX-OAB, with a Hellenic BAC.111 in the background, waiting on the old Ellenikos platform for better times in the Olympic Airways Museum. The BAC.111 and the 747 did not escape vandalism: both had large grafitti 'art' on the fuselage over the wings.

Three Olympic Airways aircraft and a Hellenic BAC111 are still parked in the west terminal. A competition in 2005 lead to a project to convert much of the former airfield into a sustainable park. Whether the project will continue under the 2009-2013 economic crisis remains to be seen.  At some point between May 2009 and February 2011, the 33R runway had gotten a large 'X' mark, indicating it was closed. The 33L was still unmarked though. In February 2011 the large hangar-like buildings on the platform were finally taken down, 6 years after the Olympic Games they had been built for. In April 2011 the new Olympic Airways museum (with the jets that had been stored at the airfield since its closure) at the former Terminal West was to opened. 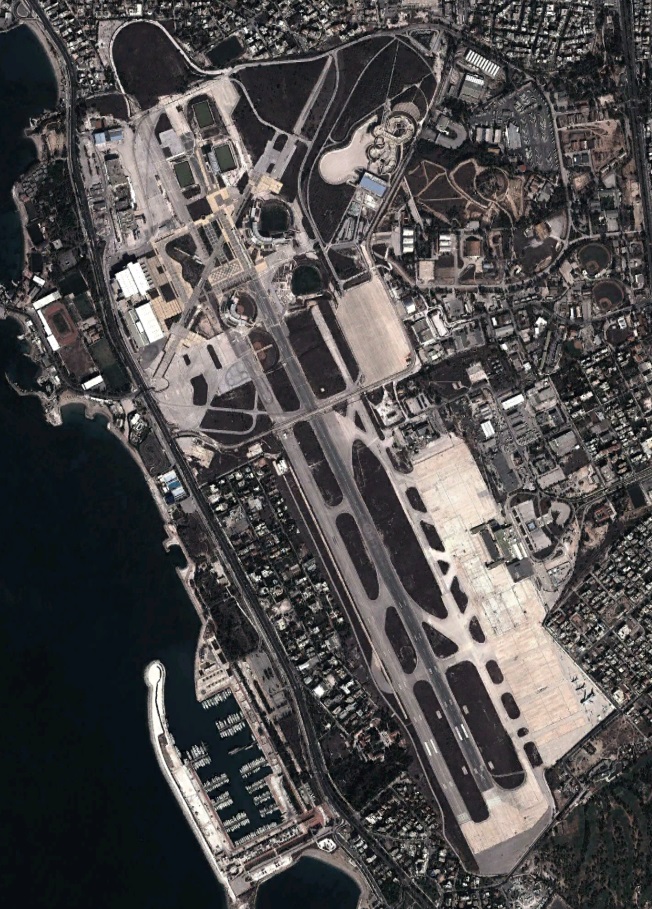 The museum aircraft had still not moved from the location they had been holding for the past decade or so. Runway 33R gained a large 'X' to indicate it is closed. The other runway is still open, suggests the absence of any 'X' marking in this November 2012 photo (Google Earth)