Ermelo airfield was a small army airfield located on a military exercise area on the moor east of the village of Ermelo, 50 kilometers east of Amsterdam.
The airfield was used almost exclusively as an exercise forward airfield for artillery observer aircraft the Group Light Aircraft (Groep Lichte Vliegtuigen, or GPLV) of the RNLAF (KLu) on behalf of the Army. Ermelo airfield consisted of three runways on a triangular field, laid out roughly in an arrow shape. As with other similar airfields, the airfield at Ermelo was not to be taken lightly. At least one pilot and his observer are known to have died due to a mishap at Ermelo. 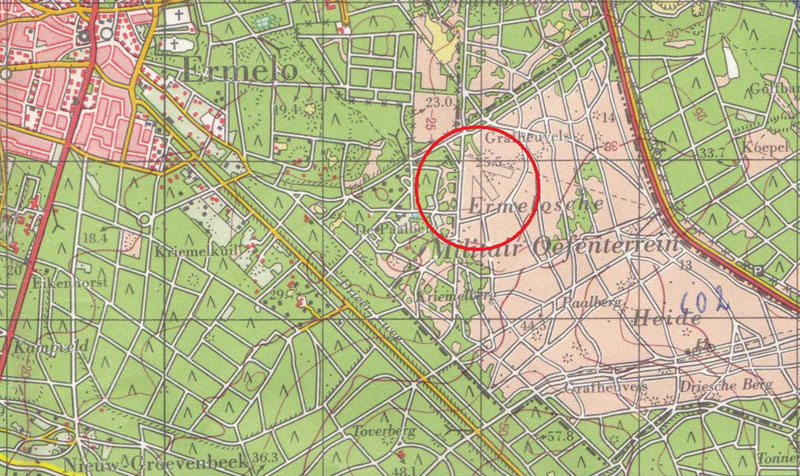 Ca. 1970 map displaying the three runways of Ermelo in the red circle (Eric Blom, via email)

Although fixed wing aviation at the airfield ended when the KLu withdrew the Pipers in the mid 1970s, helicopter use seems to have continued. While whole Ermelose Heide (Ermelo Moor) exercise area was returned to nature in the 1990s, Paul Patist reported to me on 27 September 2015: "I went back to the location today. Very special, 50 years after the crash (he refers to the crash of L-21B Super Cub 'R-123' at Ermelo, which killed two)... Of course I have been here before several times. The tracks are almost unrecognisable, but the windsock is still there and apparently it still gets renewed occasionally..."

The former runways were still recognisable in 2005 (Google Earth).

Thanks to Eric Blom for pointing out this airfield!