Feltwell airfield (RAF Feltwell) was an airfield 115 kiilometer north-northwest of London
During World War I, from 1915, it housed No. 7 Training Depot Station, which later became the Midland Area Flying Instructors School. It became officially known as RAF Feltwell on 29 November 1919, but was closed a year later. 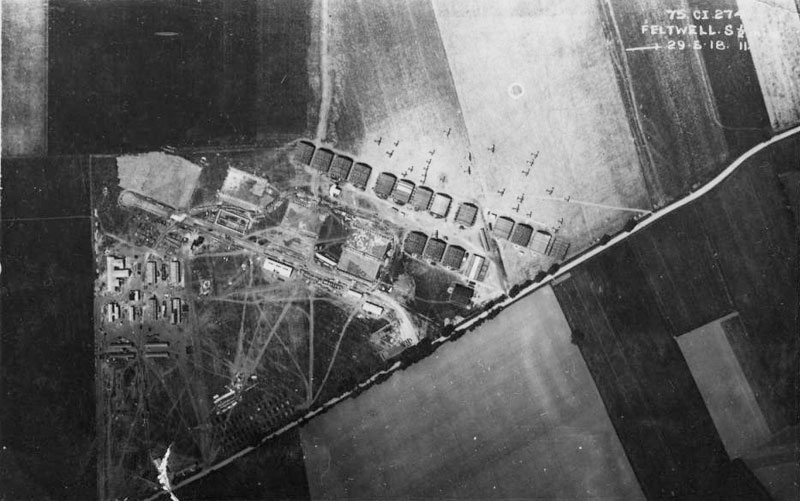 RAF Feltwell was a seriously sized installation when it was photographed with deHavilland-4s and Sopwith Pups in May 1918 (contrast adjusted, cropped and resized from Simonb's original photo at AirfieldResearchGroup).

The airfield was rebuilt during the period of expansion of the RAF in the late 1930s and therefore looks similar in layout to many of the other RAF airfields of that period. The airfield reopened on 12th March 1937 and was home to a number of heavy bomber squadrons of the RAF before and during the Second World War. The first operation was carried out on 15 November 1939 - a North Sea sweep against enemy shipping.

Handley Page Heyford at RAF Feltwell circa 1937/38. The aircraft in the background are resident Handley Page Harrows. The Heyford was likely visiting, as they went out of service soon after this picture was taken (Chris Cock, on feltwell.net). 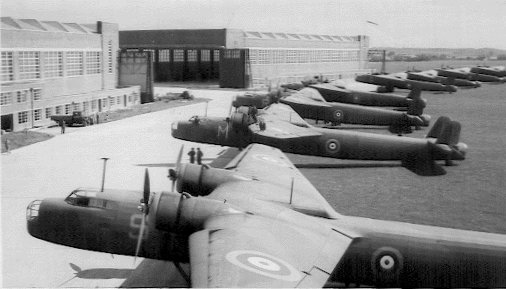 Handley Page Harrows of No. 214 Squadron RAF, parked in front of the hangars at RAF Feltwell, Norfolk, in the spring of 1938 (feltwell.net). 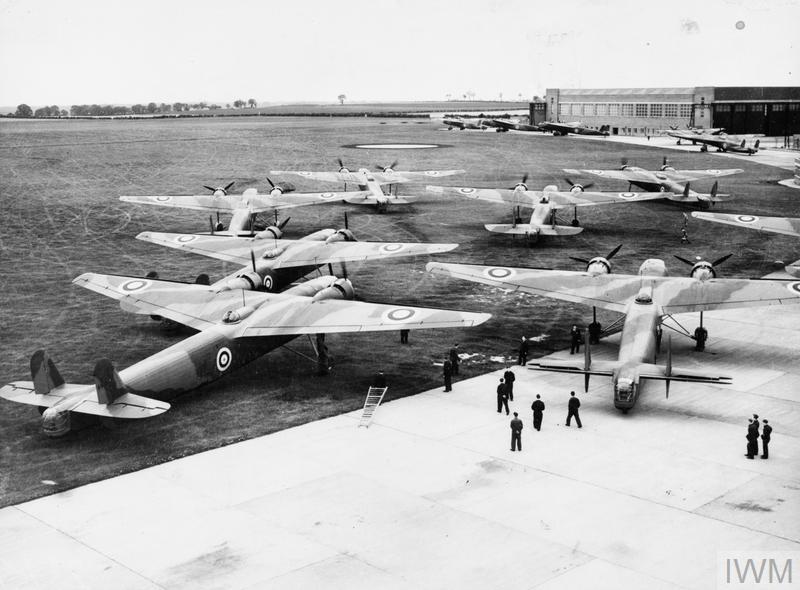 Aircrews of No. 75 (New Zealand) Squadron RAF walking past a Vickers Wellington Mark I at Feltwell, Norfolk, before a night raid to Hamburg, Germany (© IWM (CH 2671)). 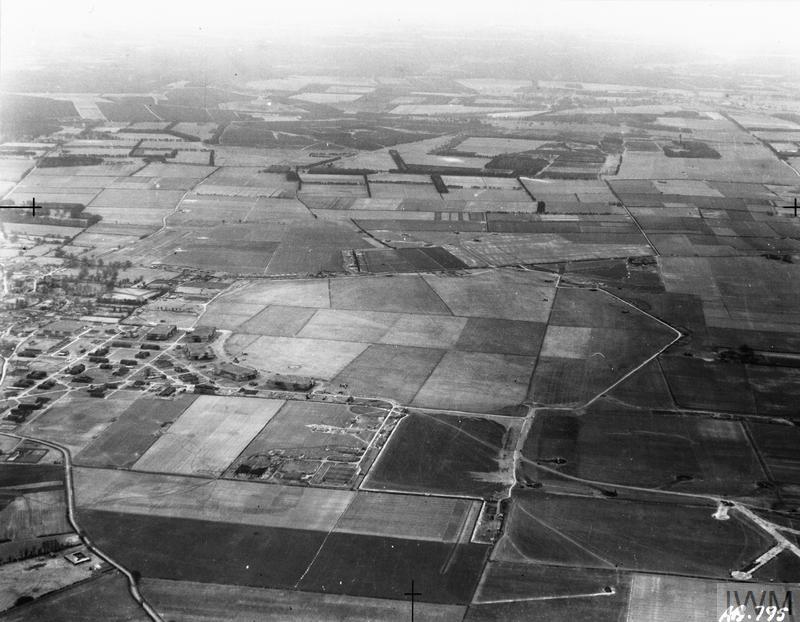 Oblique aerial view of RAF Feltwell, Norfolk, seen from the west, looking to the Breckland beyond. Vickers Wellingtons of Nos, 57 and 75 (New Zealand) Squadrons RAF can be seen parked in front of the hangars and on the airfield perimeter, as well as on pan-shaped hard-standings in the adjoining fields. Feltwell was one of the first stations to extend its dispersals from the airfield boundary. The airfield has been camouflaged with a field pattern (© IWM (HU 93048)).

Lockheed Ventura Mark IIs of No. 464 Squadron RAAF running up their engines at Feltwell, Norfolk, before a flight (© IWM (CH 8256))

From January 1945 onwards, all the RAF training resources were concentrated on the production of crews for long range flights in the Pacific theatre. For this a Gee-H Flight was established in January 1945 to train navigators in the use of new long range navigation devices. In February 1945 the Bomber Development Unit and 1688 Bomber Defence Training Flight also came tot he station. The latter was a RAF Regiment unit also destined for service in the Far East. 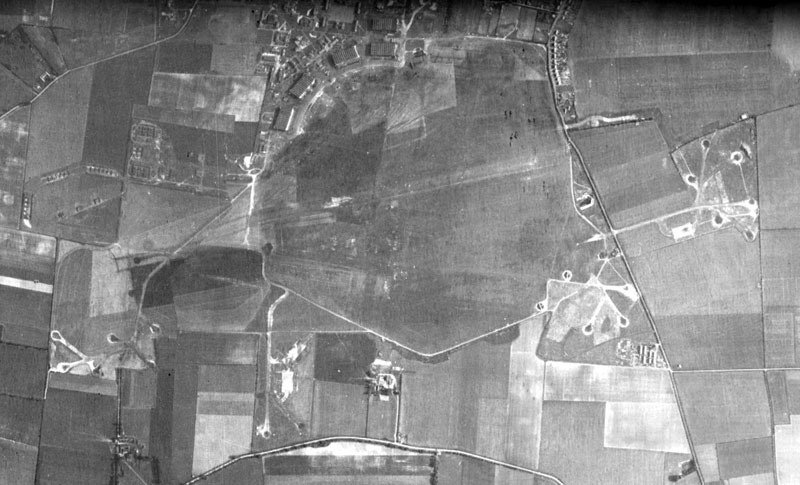 Aerial photo of the station depicting the Bomb Circle, Hangars and dispersals in 1945 (Google Earth)
Following the collapse of Germany in May a number of flights were made from this Station with ground crews as passengers to show them what their aircraft had achieved in the destruction of German industry during the war.
In April 1946, Feltwell severed it's connection with Bomber Command when it was transferred to Flying Training Command and became home to 3 Flying Training School coming from South Carney. It was also home to 651 Sqn with Auster AOP6 aircraft, between 1955 and 1957. 3 F.T.S. disbanded at Feltwell in 1958. 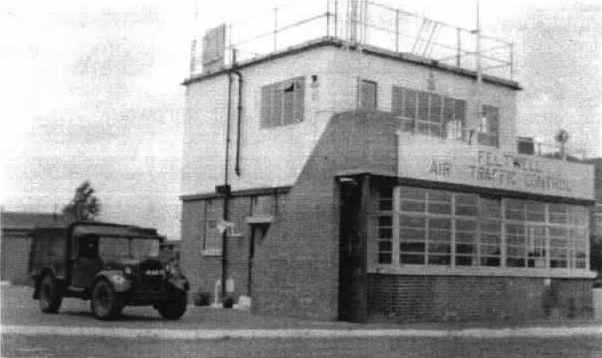 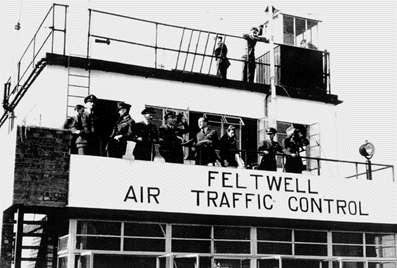 Undated photos of the Feltwell control tower. Because of the bright white paint and contrasting lettering, I assume these to be postwar photos (feltwell.net). Trainee pilot Peter McLeland posing on the wing of a 3FTS Harvard trainer at RAF Feltwell in 1950-1951 (petermcleland.com). 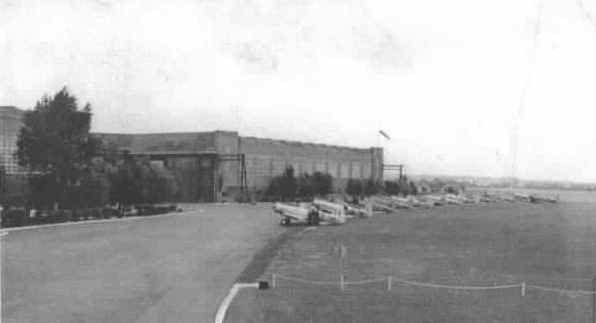 
German WW2-era fighter aces get training at RAF Feltwell to become the instructors of the postwar Luftwaffe.

The station transferred back to Bomber Command, where it became a strategic missile station. Bomber Command Strategic Missile School and 77 Sqn with their Thor Intermediate Range Balllistic Missiles were stationed here from 1958 until the type was retired in 1963. After the departure of the Thor missiles in August 1963, the RAF's Officer Cadet Training Unit was based on the station.

Between 1989 and 2003 Feltwell also hosted the 5th Space Surveillance Squadron (5 SPSS) of the US Air Force. The 5 SPSS (initially designated "Detachment 1, 73rd Space Surveillance Group", or "Det 1 SSURGP") was part of the USAF's Passive Space Surveillance Network which tracked the physical location of emitting satellites in orbit. This data along with that from other systems was used to adjust the orbits of various satellites and manned vessels (for instance the Space Shuttle and the International Space Station) to reduce the risk of on-orbit collisions. Advances in systems and capabilities ultimately led to the removal of their systems in 2002 and the unit was de-activated shortly thereafter.
RAF Feltwell is now administered by Detachment 4 of the 18th Intelligence Squadron, which is a space control intelligence organization of the United States Air Force based at Wright-Patterson AFB in Ohio, USA. Three large 'golfballs' cover their antennas. 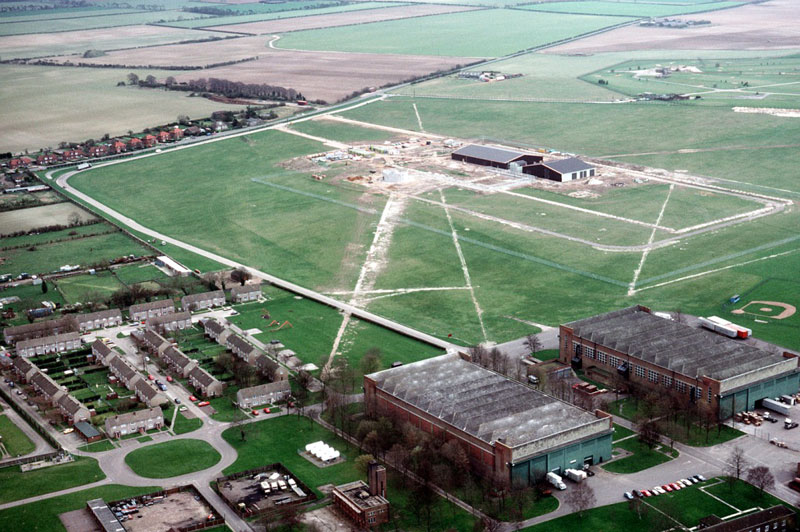 Construction of the Det 1 SSURGP site on the former flying flield at RAF Feltwell in the 1980s (kebecker on AirfieldResearchGroup).

Today, the airfield is used as a housing estate for United States Air Force personnel stationed nearby at RAF Mildenhall as part of the 100th Air Refueling Wing and RAF Lakenheath as part of the 48th Fighter Wing, while also containing the Mathies Airman Leadership School for USAF personnel in the UK, as well as being the home of the Army and Air Force Exchange Service's sole furniture store in the country. It also houses the only Middle School for Lakenheath and Mildenhall, which covers most of the station. The base golf course now occupies the old Thor missile site. 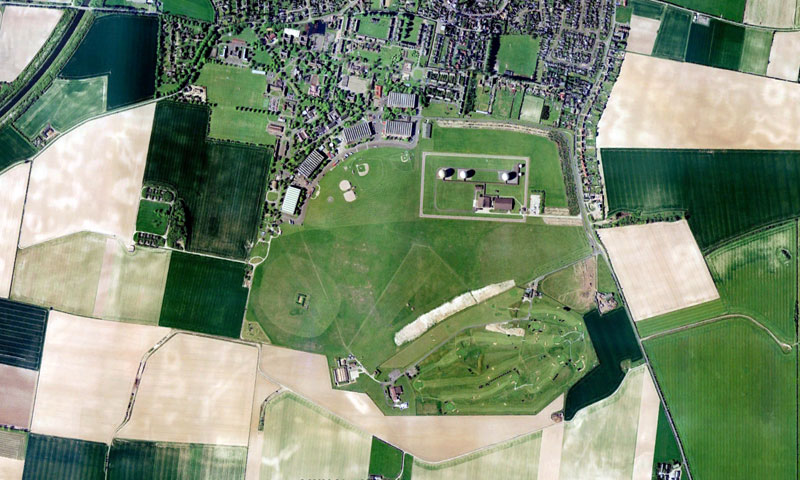 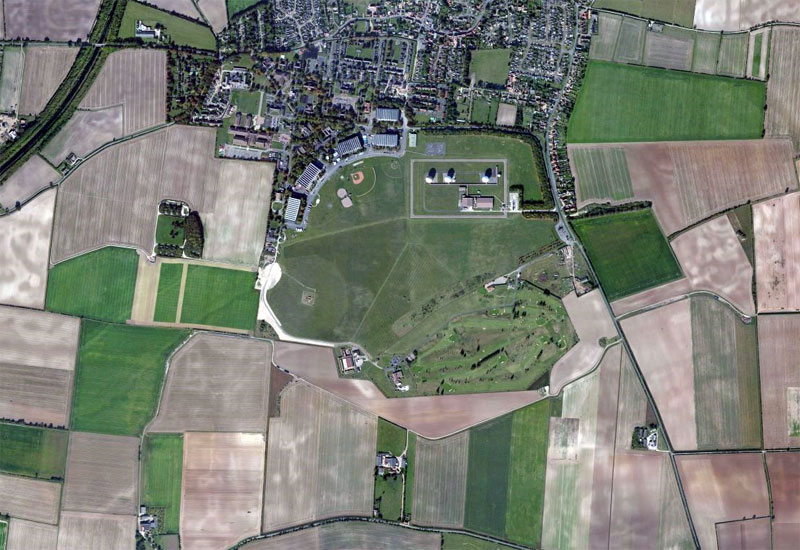 Most recent photo of RAF Feltwell I could trace, ca. 2015 (Flashearth)
contact us about this airfield