Fürth-Atzenhof airfield (German: Flugplatz Fürth-Atzenhof, also known as Fürth AAF and Fürth AHP, ICAO: EDEW) was an airfield northwest of Nuremberg, Germany,
The airfield was built in 1915, after the Royal Bavarian Inspection for the Millitary, Aviation and Powered Vehicles (German: Königlich Bayerische Inspektion des Militär-, Luft- und Kraftfahrwesen ) had been looking for a facility within reach of the IIIrd Bavarian Army Corps in 1914. Finding a suitable terrain proved easy, and soon construction of a 500x500m airfield began, which grew to 131 hectares during construction.
As World War I had costed many pilots, Pilot School 3 (Fliegerschule 3) moved to Fürth in October 1916, but as most buildings were not ready yet, the students had to live in tents at the edge of the airfield. Classrooms were in town, a stuation that had not changed by August 1917. Ultimately the airfield was not comllete until the summer of 1918. When it was complete, it featured a large maintenance hangar, 9 smaller hangars (2 north and 7 south of the maintenance hangar) and some buildings for engine test stands, vehicles, barracks, etcetera. The maintenance hangar was a very representative building with an impressive architecture. 20 aircraft could be held and repaired inside. The airfield also had a railway connection.

After World War I ended, the airfield converted to civilian aviation. Although the Versailles Treaty threatened to shut down German aviation, the governmnet managed to get the "Luftverkehrshafen Fürth" on the list of international airports. The airfield did loose some of its hangars though: they were dismantled and given to the victorers as war repairs. The first air liner landed at Fürth on 30 December 1920, a mail plane from Berlin to Munich. A second mail line was set up between Munich and Leipzig in March 1921 and the first passenger flights followed in May. A demilitarised Fokker D.VII fighter was used for weather reconnaissance. 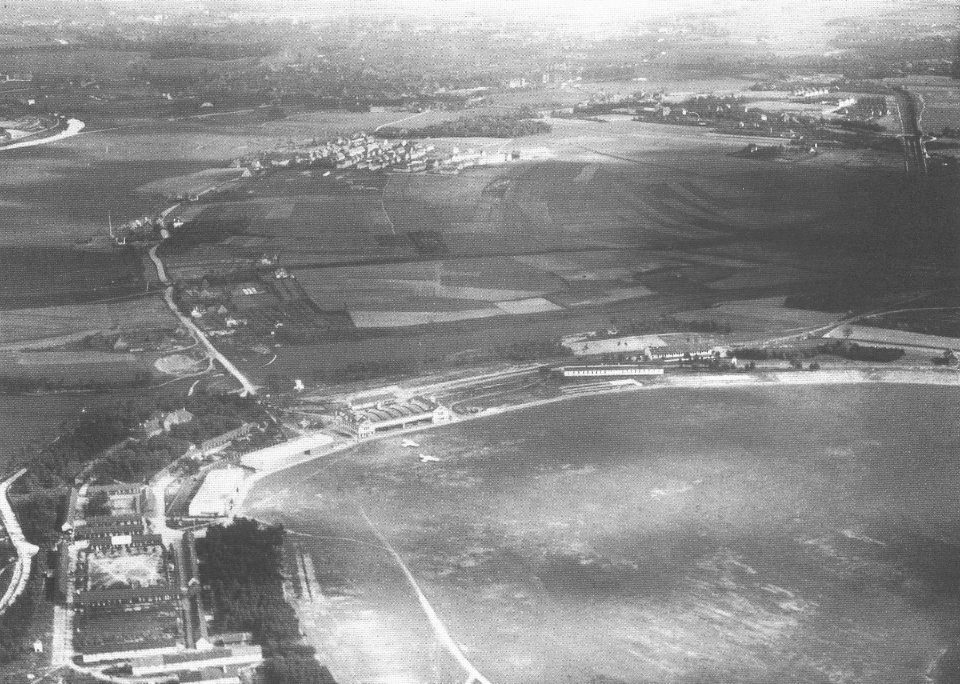 To secure its influence over the airfield, the city of Fürth bought two thirds of the airfield. The city of Nuremberg followed suit, acquiring the remaining third. From then on, the airfield was known as "Flughafen Fürth-Nürnberg".
In 1922 Junkers began building aircraft atthe airfield. Soon the production of the F13 and G24 was brought to Fürth. The plant also produced floats for the waterplane versions.
Between 1923 and 1927 the airfield grew rapidly. The number of takeoffs and passengers increased tenfold. The amount of cargo grew from only 3 tonnes to 276 tonnes. By 1926 it had become the 8th airport in Germany and in 1927 it also got night lighting. But things were about to change. Due to financial constraints in 1926, the city of Fürth did not want to invest more money in the airfield. Not wanting to be the sole contributing partner, Nuremberg decided to start an airfield on its own territory. Flights would have to continue from Fürth until that airfield was complete, however. This meant that Nuremberg would be the sole investor for maintaining the airfield, leading to a name change. In 1928 the airfield was renamed "Nürnberg-Fürth". The following year the Junkers plant was closed.
In its final 5 years as a civilian airfield, the airfield did see some highlights. Worth mentioning are the visits of the 'giant' (at the time) Kunkers G38 and flight demonstrations of fighter ace and aerobatics pilot Ernst Udet. The Fürth football team flew (a first in football) to Berlin in a Junkers G38 for their match against Hertha BSC Berlin, which they won 3:2. The famous Ju-52/3m was also a regular guest at the airfield, when Luft Hansa began using the aircraft on their Berlin-Munich service.
The airfields civilian life ended on 20 August 1933, when the final aircraft left for the new Nuremberg-Marienberg airfield. 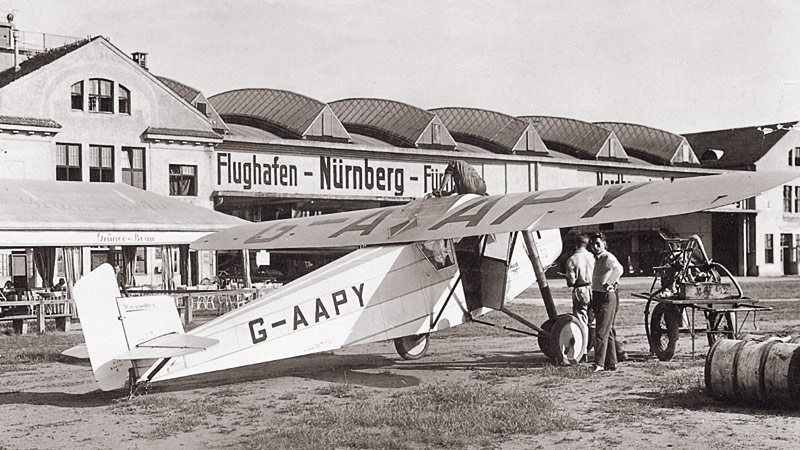 British Desoutter-I 'G-AAPY' of the National Flying School at Hanforth refuelling at Fürth. Judging from the name 'Flughafen-Nürnberg-Fürth', this photo and the one above it must have been taken ca. 1930 (airport Nürnberg).

When the civilians had left, the airfield immediately saw use by the military. Although officially the Luftwaffe was not founded until 1935, paramilitary activities began two years earlier by aviation clubs and companies. The "Sportflug GmbH" ("Sports Flights Ltd") and the "Reklamestaffel Süddeutschland" ("Commercial Squadron Southern Germany") were actually fronts to restart training for the future Luftwaffe. An air defense unit was stationed at the airfield which after 1935 became known as I./Flak Reg. 8 "Fürth". In 1934 and 1935 the airfield was considerably rebuilt, with new hangars, barracks and a fire brigade. These new activities moved much of the airfields buildings to the north side. Fürth then became a flyning school, fist for basic training, later for blind and night flying for both single and multi engine aircraft.
In 1940, Fighter School #4 became Jagdgeschwader 104 (JG104). From now on the focal point was the training of pilots that were to fly the famous Bf-109. The unit had one front line squadron of 109s and two Do217 night fighters. In 1944 the first Me262 jet fighter landed at the airfield. Flight trainign continued until March 1945, when fuel and lubrication became impossible to get. By that time, most of the Luftwaffe troops had been sent to the Eastern Front as infantry units anyway. 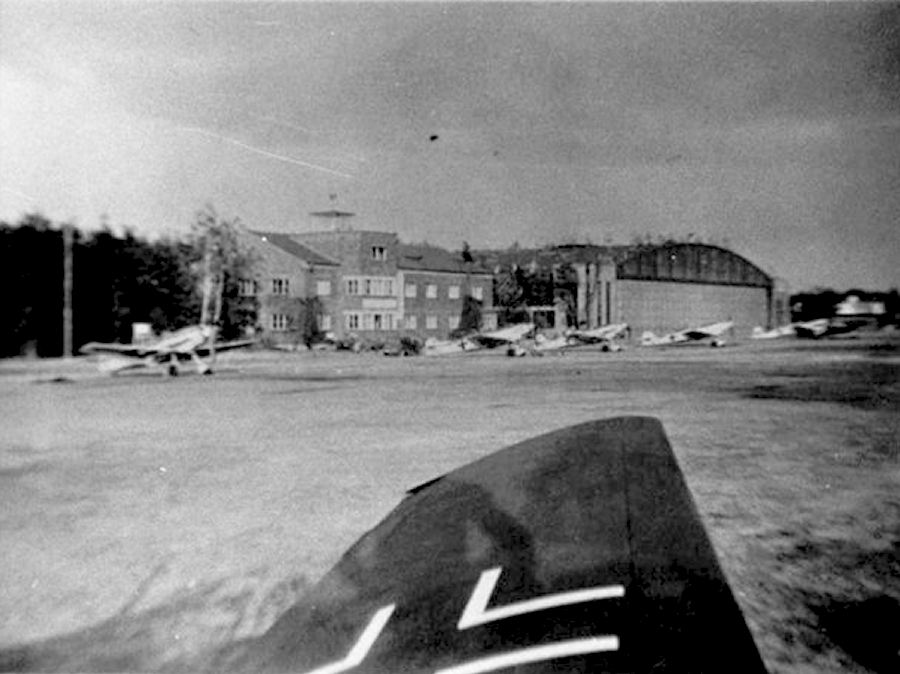 Contrary to the nearby factory airfield of Bachman & Blumenthal, Fürth-Atzenhof received very little damage. This was in no small part owing to the base commander, who did not carry out orders to blow up the airfield, saving the historical buildings for future generations. Fürth was taken and occupied by the U.S. Army 42nd Infantry Div on 19 April 1945. They used it used as the Ninth Air Force combat airfield R-28 Fürth until the end of the war in Europe. After the war "Army Airfield Station Fürth" was established at the airfield, but it closed in June 1947. 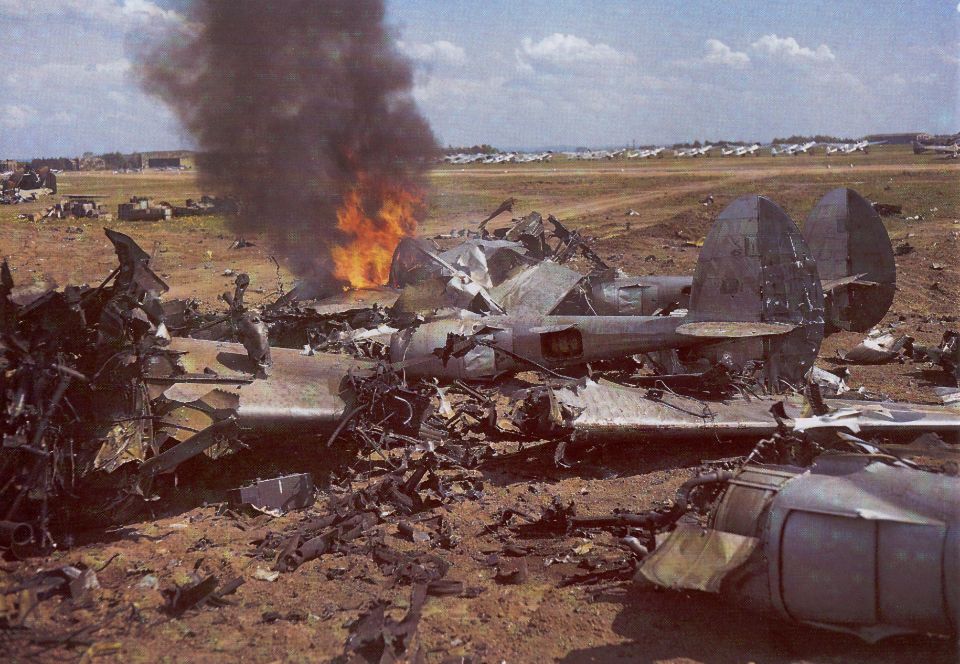 US P-38 aeroplanes are being destroyed at Fuerth airfield, after the useful parts such as engines, propellers and radio equipment have been removed. In the background more machines are waiting (publisher A. Hofmann, "Nürnberg nach 1945", Nürnberg, 1995, via The Nuernberg Military Community)

The airfield became a U.S. Army barracks, christened "Monteith Barracks" in 1949. Several helicopter units, including a training unit were stationed at the airfield. the U.S. 4th Armoured Division was stationed at Fürth (later the 1. Armoured Division). In 1956 the airfield held an airshow that attracted over 100,000 people from the region. In the 1960s, the airfield was home to 2 companies of CH-34 helicopters and a reconnaissance unit flying the then classified OV-1 "Mohawk". The construction of the Rhein-Main-Donau Canal around 1970 reduced the large area to its present size. The airfield became a helicopter only airfield, known as Fürth AHP. The Americans converted part of the airfield into a golf course, which still exists today. 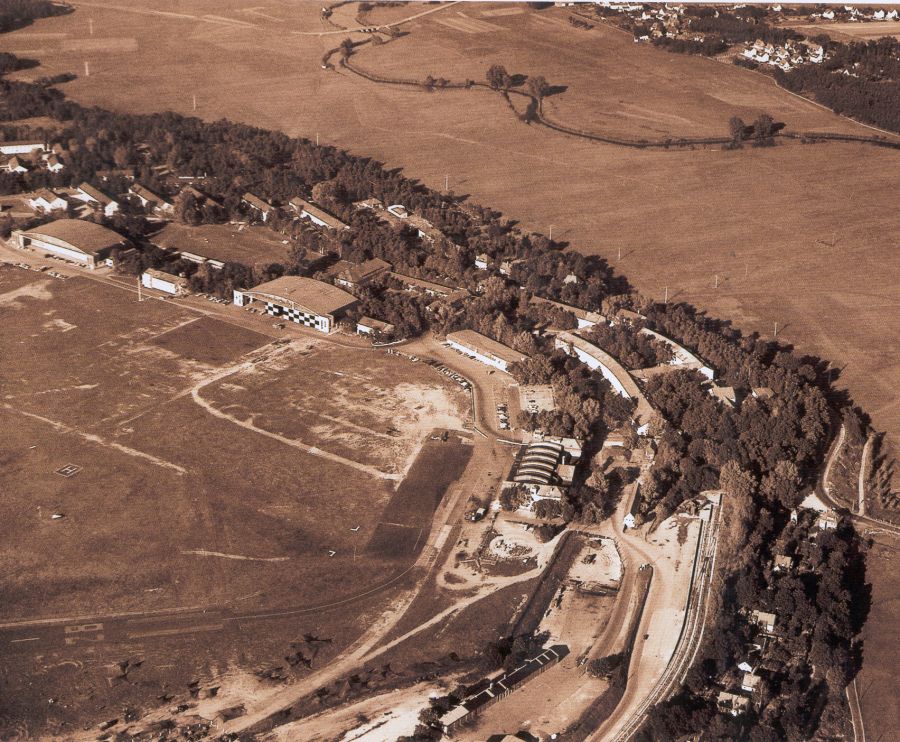 A CH-34 helicopter burning at Fürth on 21 April 1964 (The Nuernberg Military Community). 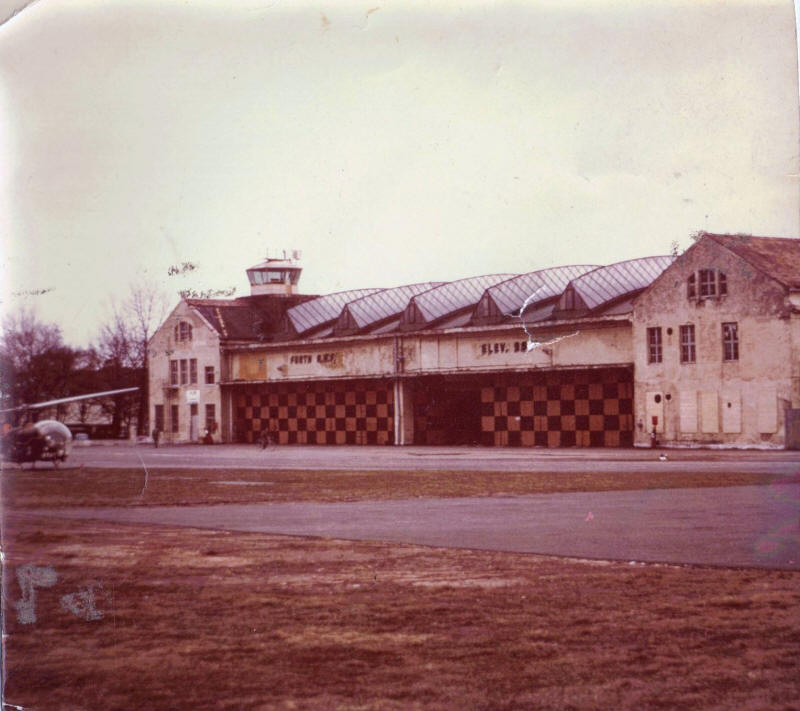 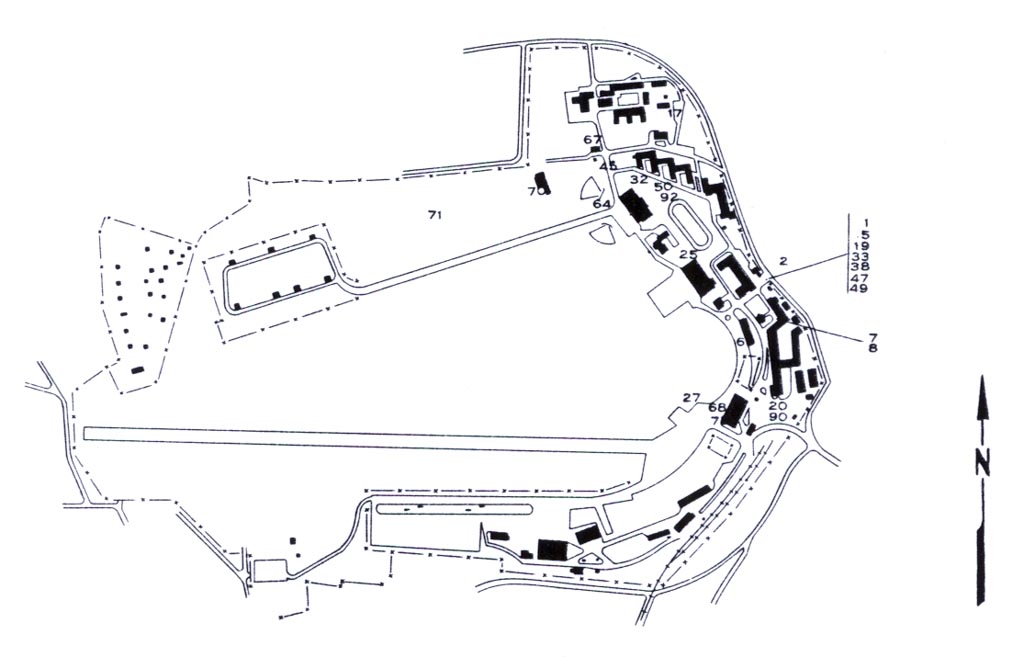 The airfield and its fairly long runway, as it was until ca. 1970. Although websites like usarmygermany.com claim this is what the site looked like until the late 1970s, this cannot be correct as the Main to Nuremberg part of the Rhein-Main-Donau Canal (which now runs through the west side of the former airfield) was opened in 1972. (armykaserne.com). 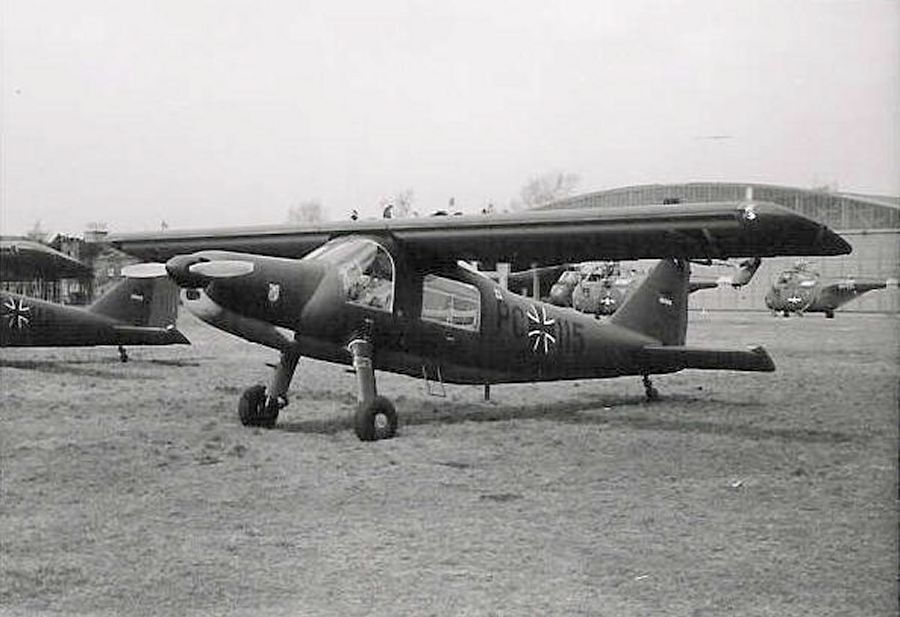 During the 1970s, 1980s and early 1990s, the airfield served as Fürth AHP at the Monteith Army Barracks. While about half its runway remained, this was no longer used.
On 15 September 1993 the U.S. flag was lowered for the very last time and the Army HeliPort closed permanently. The airfield, minus its golf course which was sold to the local golf club, was returned to the German government. The airfield has since been redeveloped into a light industrial area, although many aviation related buildings and infrastructure can still be found at the site. 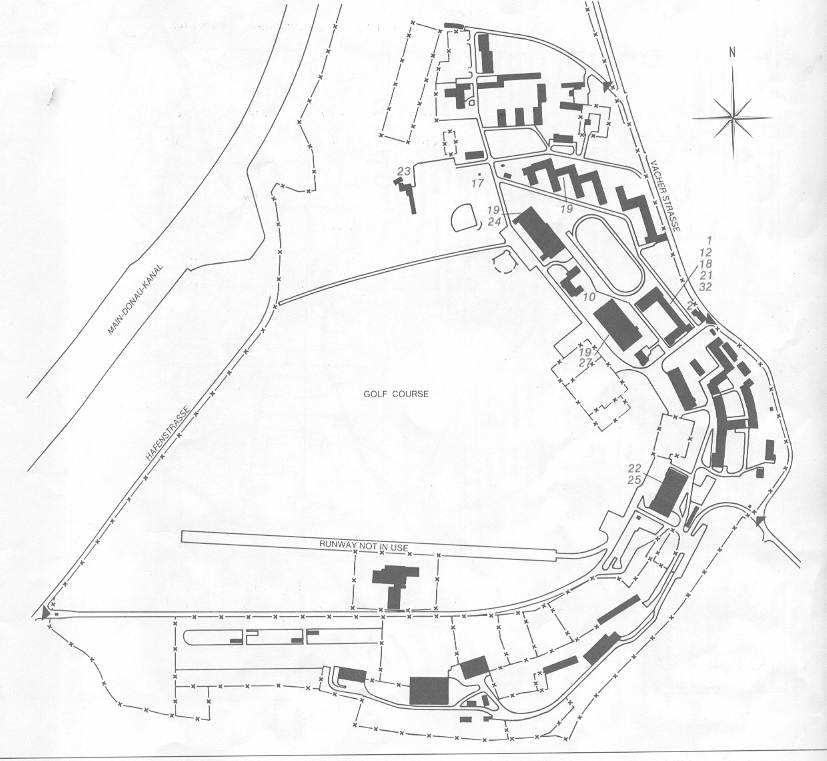 Plan of the airfield from the early 1970s. Today, much of this lay out is still recognisable in aerial photography (The Nuernberg Military Community). 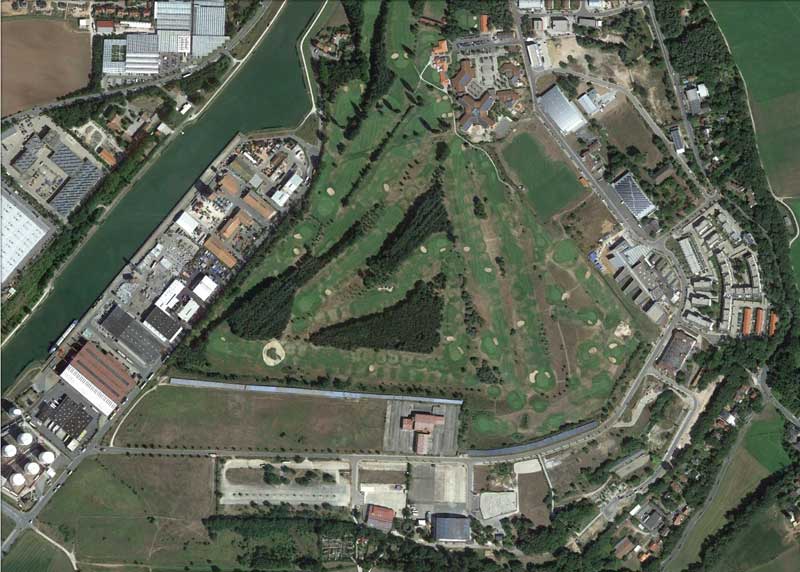 What remained of the former airfield/US Army installation in the summer of 2013 (Google Earth).