Foulsham airfield (more commonly known as RAF Foulsham or Royal Air Force Station Foulsham) was an airfield located 160 kilometer northeast of London.
It was built between 1941 and 1942 as a 2 Group Bomber Command airfield and opened in May 1942. The airfield was declared operational on 26 June 1942.
The airfield was equipped with three tarmac runways and 37 aircraft parkings. It ultimately had one B1 and 9 T2 hangars, five of which were built for storing Airspeed Horsaglider aircraft ready for D Day. It had provisions for 2135 RAF personnel plus 355 WAAFs.
The first residents were 98 Sqn and 180 Sqn, flying North American Mitchell bombers. Having arrived in October 1942, they were joined by 320 (Netherlands) Squadron in June 1943. All three Mitchell bomber squadrons left in August 1943.
From 1 Septermber 1943, the station was used by 3 Group, with Avro Lancaster bombers of 1678 Heavy Conversion Unit and 514 Sqn, which was formed at Foulsham. At the same time, a USAAF unit (357 Servicing Squadron0 used the airfield for modification work on photo reconnaissance Mosquitos. 514 Sqn left in November 1943, 1678 HCU left the following month.
The station was also home to 192 Sqn, part of 100 (Special Duties) Group, an electronic warfare unit which had its headquarters at Bylaugh Hall. 192 Sqn performed Electronic Intelligence flights and helped develop countermeasures. 357 Servicing Squadron left Foulsham in February 1944.

Foulsham was one of the few airfields to be fitted with FIDO in 1944, a fog dispersal system which used fires at the sides of the runways.
The airfield was used by several electronic warfare units, including a Radio Countermeasures detachment of USAAF Eighth Air Forces 7th PG(R), flying Lighting P-38J (F-5) fighters modified for electronic intelligence gathering. They were later joined by another 100 Group squadron, 462 Sqn, Royal Australian Air Force, which operated Handley Page Halifax aircraft.
During World War II, 45 aircraft based at RAF Foulsham were lost. Many aircraft made emergency landings at Foulsham, including USAAF Boeing B-17 Flying Fortress F "Ruthie II", which made an emergency landing there in 1943 after an epic return flight for which co-pilot John C. Morgan was awarded the highest U.S. medal, the Medal of Honor.

Handley Page Halifax B Mark III, MZ817 'DT-O', of No. 192 Squadron RAF after crash-landing while taking off from Foulsham, Norfolk, on a radar surveillance sortie in the evening of 9 December 1944. 22 mission symbols are visible by the "Pete the Penguin" insignia on the nose (IWM (HU 60601)). 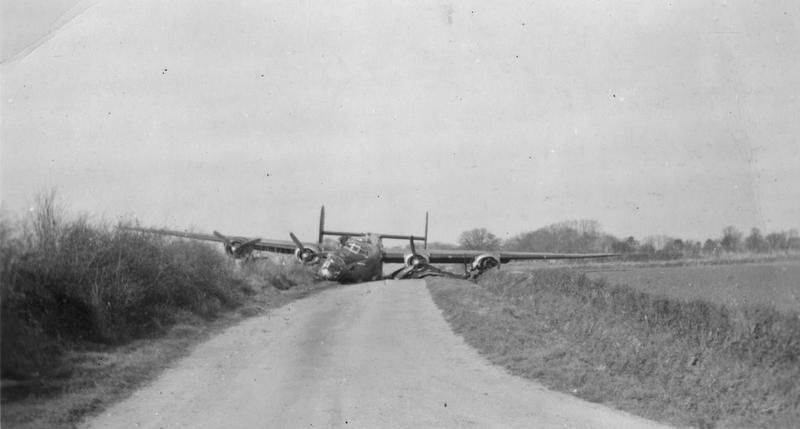 Foulsham, England. 1945. 'Jane' (NO. MZ913), a Handley Page Halifax B Mark III aircraft 'N' of No. 462 Squadron RAAF. The bomber flew over 100 trips and was used in the first operations of the squadron. It was finally consigned to the wreckers in Cardiff, Wales on 1945-05-04. No 462 Squadron Halifax aircraft had vertical yellow stripes on their tail fins for in flight identification (Ronald M. Hines, via AWM).

The FIDO system did nothing for keeping Foulsham open after the war. It closed for flying in June 1946, although Mosquitos continued to be sent to the airfield for scrapping until the end of the 1940s. The US Army used part of the airfield until 1955. In the late 1970s (1977?) crop dusters  Piper PA-25 Pawnee 235s G-BDSR and G-BDWL of T M G Hanley Ltd are known to have been based at the airfield. The airfield remained the property of the Ministry of Defence until the mid-1980s, by which time the tower had been demolished already. 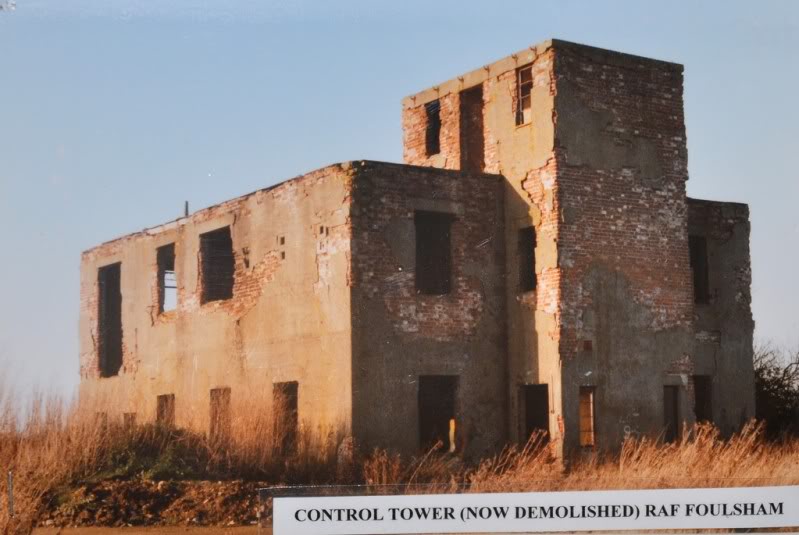 The remains of Foulsham tower before it was demolished (slide via Richard E. Flagg)
Currently, the last remaining runway is occupied by two large chicken houses. Alledgedly, a photographic and film studio producing adult movies operated from the old fire station on the east side of the airfield for some time. Oddly enough, a large amount of hangars are still standing, providing proof that there was indeed once an active airfield here. Some original T2 hangars, 3 in total, are now used by a local potato business. The complex is aptly named ‘Addison Farm’ in recognition of Air Vice Marshall Edward Barker Addison, the only person to Command 100 Group during the war.
From the air, the runways are still recognisable: in the past years park-like scrubs have appeared on them. 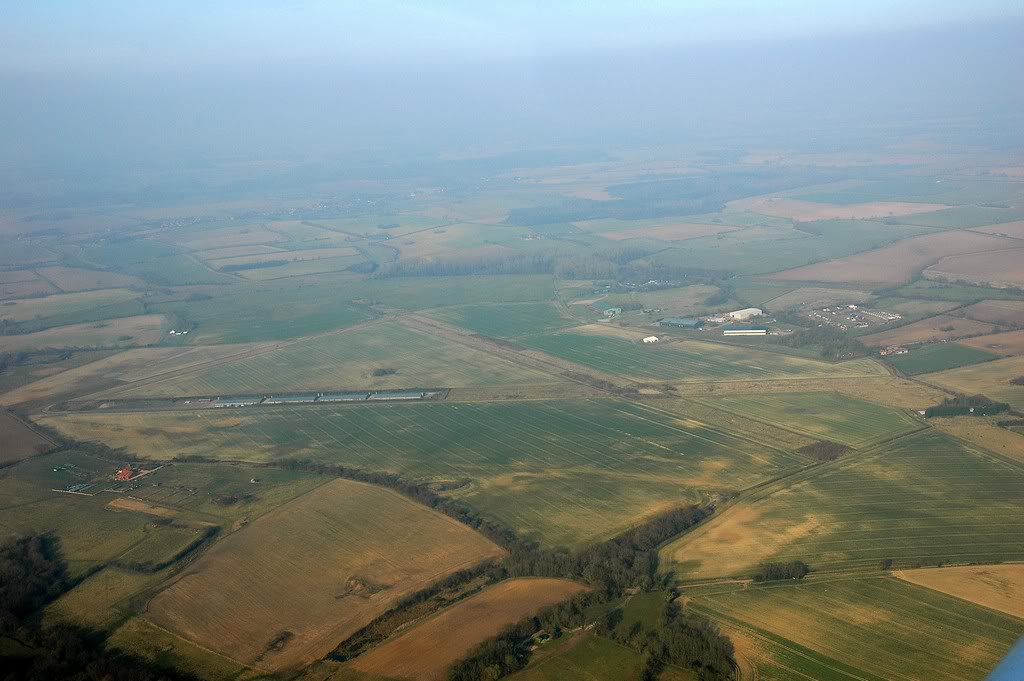 Foulsham airfield in 2009, looking northeast. The silver blocks are poultry sheds, the larger buildings on the right are T2 hangars (Richard E. Flagg) 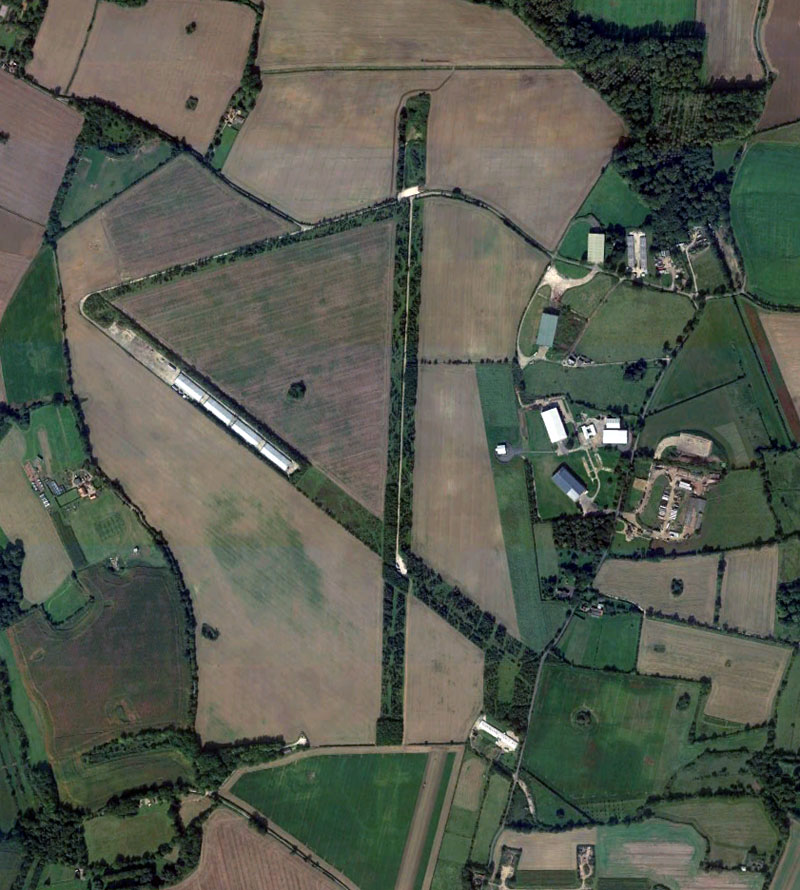 Foulsham in September 2017 (Google Earth)
contact us about this airfield