Air field Gela-Ponte Olivo (Italian: Aeroporto di Ponte Olivo or Aeroporto di Gela-Ponte Olivo, also known as Gela airfield or Ponte Olivo airfield, ICAO: LICI) was an airfield in the south of Sicily, 130 kilometers north of Malta.
The airfield was built in the 1920s as a civilian airport, but it became a military airfield for the Italian fascists Regia Aeronautica in 1939. Their intention was to use the airfield as a bridgehead to the Italian colonies in Africa.
On 11 September 1939 it became home to the 41 Stormo Bombardamento Terrestre (41 Bomber Wing) operating 18 SM79 bombers. In October 1940 that unit moved to an airfield near Benghazi (Lybia).
Together with Comiso airfield and the airstrip at Biscari the airfield was used extensively to attack British bases on the Maltese islands. Fighting against the RAFs Hurricanes was 51 Stormo (51 Wing) flying Macchi MC202 fighters.
The Luftwaffes 7./JG 26 was stationed (with several short breaks) at the airfield between 7 February and 25 May 1941. They were flying Bf-109Es and are known to have operated over Malta from Gela in March 1941. They were replaced by Bf-109Fs of JG53 and FW190s of III./SKG10 until May 1942.
Gela was attacked by RAF Hurricanes in the morning of 12 November 1941, who strafed and bombed the airfield. 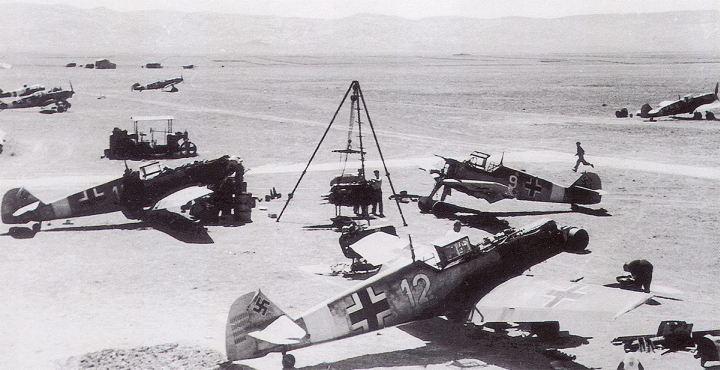 Italian fighter Ace Maresciallo Ennio Tarantola at Gela in the summer of 1942, sitting on the rudder of his Macchi MC.202 "151-2"

During the summer of 1943 the airfield was heavily bombed by the Allies. It was subsequently put on the target list for Operation Husky (the Allied invasion of Sicily) as a primary objective. On 9 July 1943 505th Regimental Combat Team and the 3rd Battalion of the 504th Parachute Regiment of the 82nd Airborne division carried out an assault on the airfield from Tunesia. Their mission was to capture the high ground next to the airfield and assist U.S. II Corps of the 7th Army in capturing the airfield. The mission, the first of its kind undertaken by the Allies, was a success, although only 400 men (25%) had reached the target area. The others, although scattered all over the island caused so much confusion by attacking and demollishing that the initial reports by German radio spoke of ten times the actual troops dropped.
Twelve aviation engineers of the 809th EAB repaired the airfield in a few days. As soon as the airfield was deemed safe for operations the 27th Fighter Bomber Group based A-36 Apache (ground attack optimised P-51s) at the airfield.
They were folowed by:
HQ 64FW (12 July-1 September 1943).
HQ 51TCW (29 August-29 September 1943).
12BG, flying B-25 Mitchells (2-22 August 1943).
86BG, flying A-36 Apaches (21 july-27 August 1943).
31FG, flying Spitfires (13-21July 1943).
60TCQ, flying C-47 Skytrains (Dakotas, from 31 August-29 October 1943).
62TCW, flying C-47 Skytrains (6 September 1943, February 1944).
USAAF transferred control of the airfield to the Italian authorities in September 1944 after they closed their facilities. 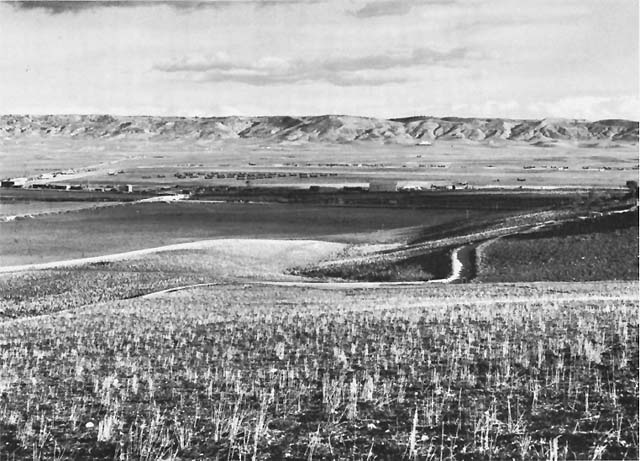 In the 1950s and early 1960s the airfield was used by Enrico Mattei and other managers of Italian energy company ENI as a private airfield. They flew to it to inspect the nearby petrochemical refineries. On 27 October 1962 Mattei took off at 7:30 for what was to become his final flight. A few hours later his privately owned Morane-Soulnier MS-760 exploded in the skies over northern Italy near Milan. The cause of the crash was never clarified, but is widely believed to be caused by a bomb.

Today there are little or no remains of the former airfield It is still possible to recognise the exact location of the runway from aerial photography though. Some buildings in the area may have been converted for other porposes. 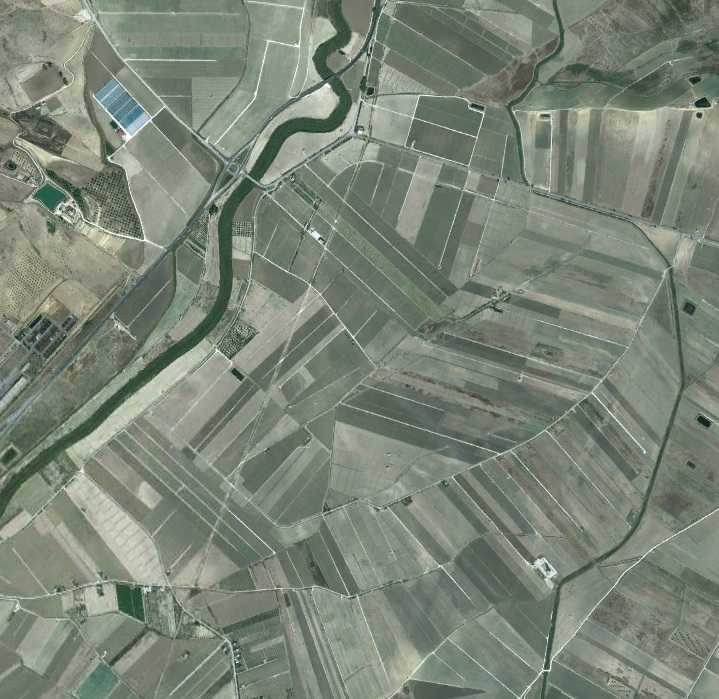 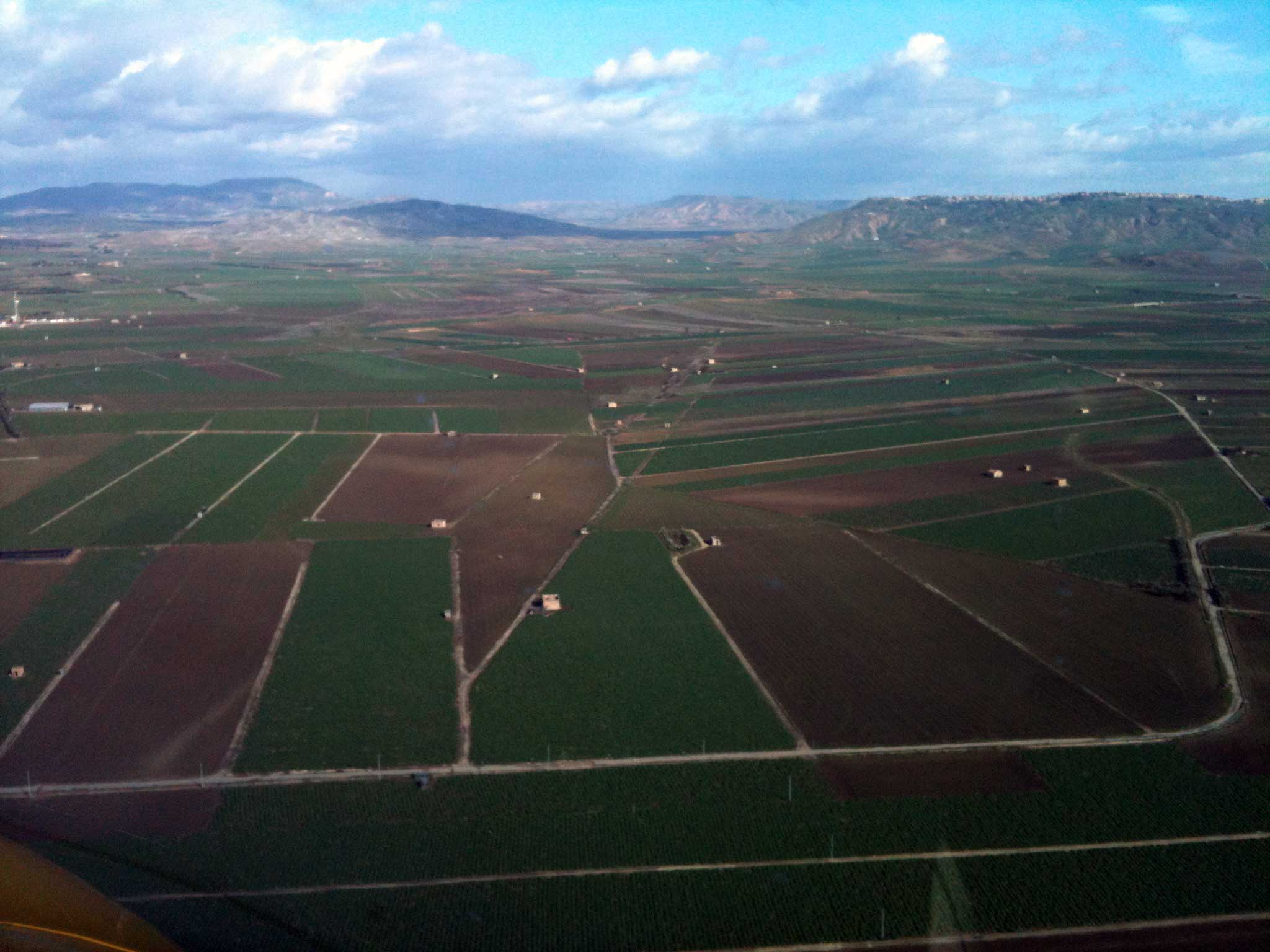 On Christmas Day 2012, Giuseppe Barcaccia surprised me by emailing me this picture of Gela, looking northeast along the former runway, taken by him on 11 Dec 2012.