Airfield Güstrow (german: flugplatz Güstrow, fliegerhorst Güstrow or Fliegerhorst Bockhorst, ICAO: EDCU)is an airfield 160 kilometer northwest of Berlin, Germany.
Construction of the airfield began in the spring of 1933 as an emergency diversion field (german: Notlandeplatz). In 1937 it was taken over by the Luftwaffe who built barracks and two hangars. Initially it had no flying units assigned.
In August of 1938 the first unit was stationed at the airfield, which became Pilot Training Regiment (german: Flieger-Ausbildungs-Regiment) 22 on 1 April 1939. The unit moved to Warsaw in September 1940, after which several other training units used the airfield. On 1 February 3./JG103 moved to the airfield, but they left for Neumünster on 1 March already.

On 2 May 1945 the Red (Soviet) Army occupied the airfield, who reformed it into a firing range for Russian troops.
Somewhere in the time between 1945 and 1969 authority over the airfield was transferred to the German Democratic Republic, although the Soviet firing range remained operational.

In 1969 the NVA flight safety handbook "Handbuch für Flugsicherung - HB 325/5" described the airfields users as the East German Society for Sport and Technology (Gesellschaft für Sport und Technik, or GST) and business flights. The handbook listed the airfield as having two runways.
The airfield also served as a dispersion airfield for the NVA (Nationale Volks Armee, or National Peoples Army).
For this role the 27 runway was (planned to be?) marked with a beacon. Business flights included agricultural aircraft, jokingly called 'mistbombers' by the GST pilots, of state-run aviation company Interflug.
The Allied Air Corridor from Hamburg to Berlin ran straight over the airfield.
This meant that on several occasions transport aircraft of the US Air Force forced Güstrow gliders to stay low.
Ultimately the gliders were restricted to 450m altitude, forcing them to other airfields for high altitude flights. 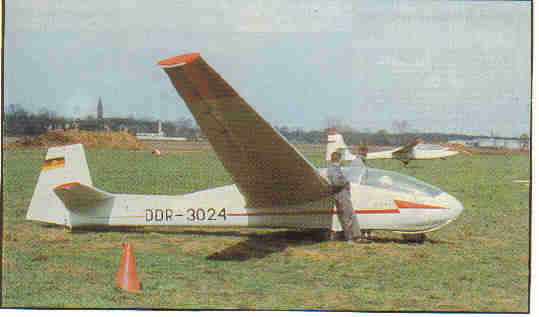 Glider landing at flugplatz Güstrow in 1984. 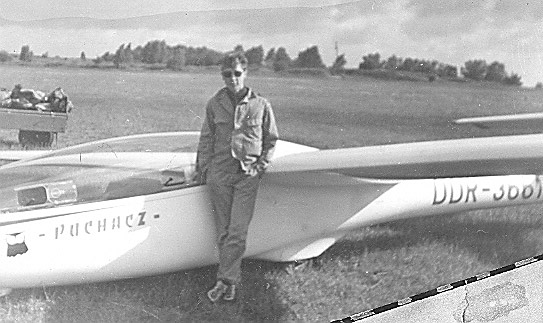 Glider pilot posing with his aircraft at flugplatz Güstrow in 1986 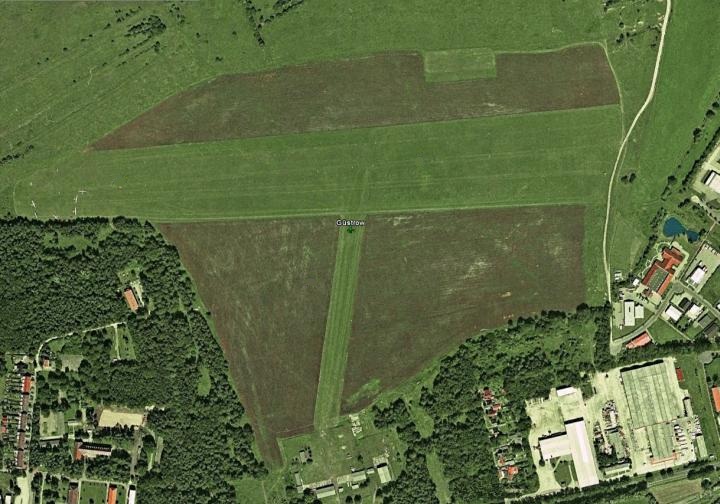 Today the airfield is a small recreational airfield, allowing light sports aircraft, light helicopters, ultralights and (powered) gliders. Most of the former barracks area has been overtaken by a light industrial area. Only a few buildings from WW-II remain, like the officers mess. Güstrow is strictly PPR.