Great Orton airfield (also known as RAF Great Orton, and locally as Wiggonby airfield) was an airfield approximately 430KM north-northwest of London.
The airfield was opened in June 1943, but did not become operational until that October. Great Orton served as a satellite airfield for nearby RAF Silloth. Although larger than Silloth (it was to be capable of handling bombers) it had far less facilities. It was used by Welingtons of No.6 Operational Training Unit and Hurricanes of No.55 Operational Training Unit. Two air-sea rescue squadrons (281/282 ASR) flying Vickers Warwicks also operated from the field. When World War II ended the airfield became a bomb storage facility, named 249 Maintenance Unit.
Both the RAF station and the Maintenance Unit closed in August 1952.

Although closed, the airfield remained property of the Air Ministry until 9 June 1964. It was for some years considered to become a civilian airfield.
In 1955 it was announced that many disused airfields were to be disposed of. "Where land was aqcuired compulsory, claims of the original owners would be carefully considered", stated the memorandum. The decision was not made until 1963 however.
Because of tresspassing (with all the dangers of the old control tower) and the use of the runways by learner drivers and high speed motorists, the landowners closed the ex-airfield to the public. The farmers then began reworking the scrubland to fertile farmland. In 1989 the airfield saw some renewed flying, when microlights began flying from the airfield. That must have ended around 1992, when a wind farm was erected on the site.

Sections of the runway, the perimeter track (taxiways) and aircraft parkings still exist. The outlines of more can be seen from aerial photography. The skeleton of the control tower still exists on the northwest side of the former RAF station. Great Orton became headline news in 2001, when 466,312 slaughtered animals (mainly sheep) were kiled and buried at the airfield in 2001. The killing was the result of the Foot and Mouth crisis, and the ainimals were buried in 26 pits surrounding the runways. Most of the terrain has been restored as the Watchtre Nature Reserve. 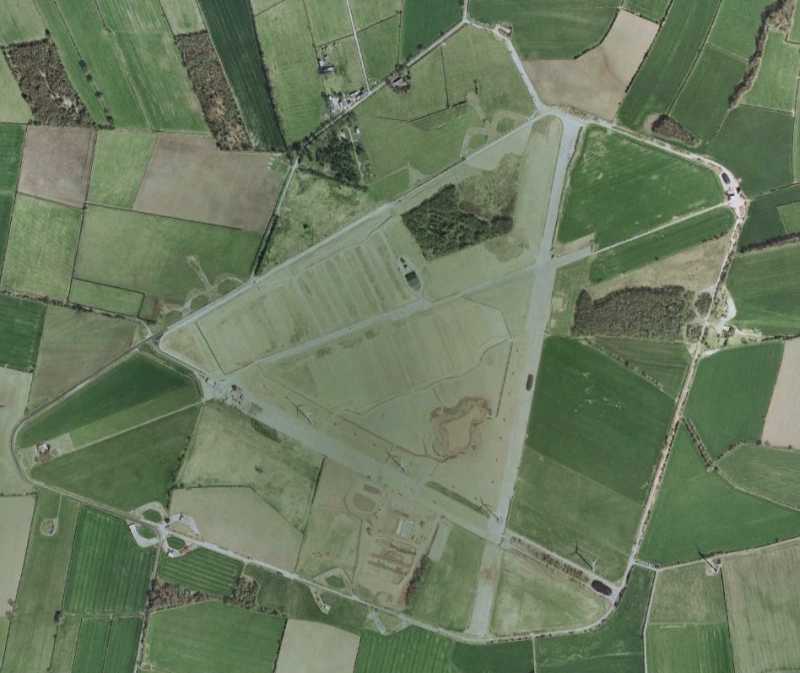 The remains of RAF Great Orton in 2003 (Google Earth)