81°10'00"N 064°35'00"E
Runway: ../.. - 2125m/6972ft - ice/gravel
Greem Bell airfield (Russian: аэродром Греэм-Белл, also spelled as Graeme Bell or Graham Bell airfield. Russian airfield designator RU-2510, international radio callsign XLDG) is an airfield on Graham Bell Island, Frans Josef Land, 2950 kilometer north-northeast of Moscow.
Officially called Severnaya (simply translated as 'North', or Северная аэродром) airfield, it is the northernmost airfield in the world.
Greem Bell was built on the flat tundra in the north of the island in the late 1950s. It served as a base suitable for Soviet tactical aviation interceptors and transport aircraft to protect the northern approaches to Nova Zembla against reconnaissance flights or incoming American bombers. It was operational only during the 8 months that provided sufficiently frozen soil. The airfield fell under the jurisdiction of the interceptor aircraft regiment from Rogachevo (Novaya Zemlya) and was maintained by OGA (Arctic Control Group), the Russian Air Force agency which maintains forward strategic deployment bases.
Four Tu-128 (NATO "Fiddler") long-range interceptors of 72 Gv IAP (72nd Guards Interceptor Aviation Regiment) from Amderma were based here for a one-month deployment in March 1978. From the early 1980s into the 1990s it was regularly visited by Su-27 (Flanker) and MiG-31 (Foxhound) interceptors of the 10 OA (10th Air Army) PVO Arkhangelsk. 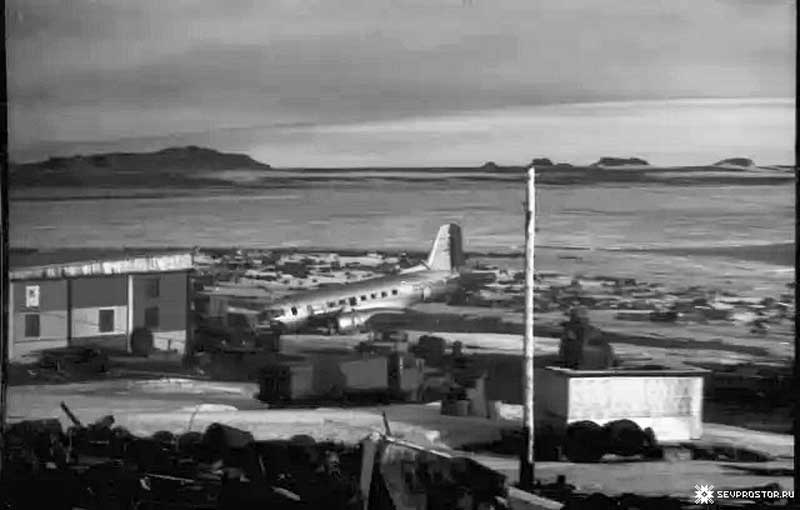 The wreck of an Il-14 'Crate' is visible in this undated photo (sevprostor.ru). 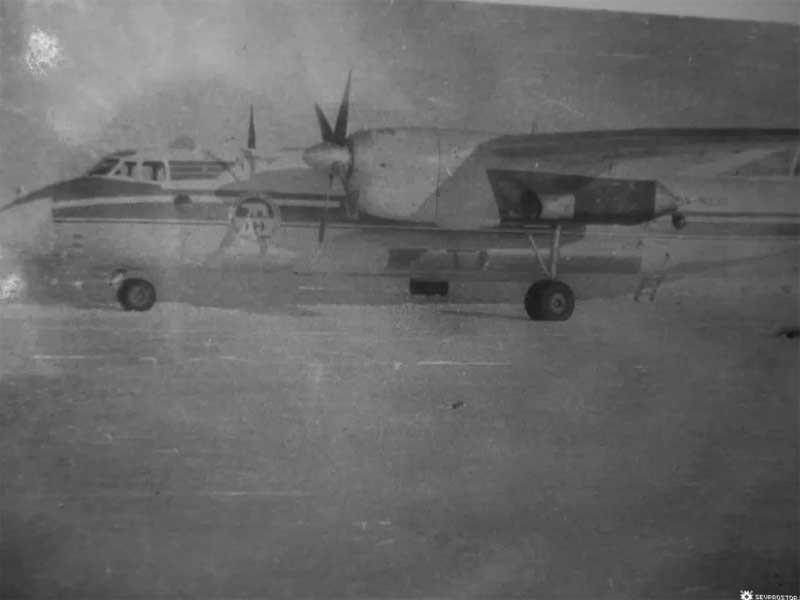 Undated photo of an An-26RL (an arctic surveillance, reconnaissance and monitoring aircraft used to monitor the icebergs and ice formations at arctic circle fitted with SLAR (Sideways Looking Airborne Radar) in long pods on either side of the lower fuselage, extra fuel in a cargo hold fuel tank, provision for surveyors and radar) at Greem Bell airfield (sevprostor.ru).


On 18 March 1988, Soviet test pilot Victor G. Pugachev in a Su-27UB with in-flight refuelling performed a flight with 6 other Su-27 air defense fighters to the northernmost airport in the world - Graeme Bell in the archipelago of Franz Josef Land, located in the immediate vicinity of the North pole. In spite of severely bad weather, he demonstrated the possibility of using this technique to reach high latitudes and safely returned to his home plate at Kilpyavr Air Base (Килпъявр авиабаза). As a result of this trial, it was decided to realise the Su-27UBs new modification on fighters intended for air defense, to allow them to perform long flights.
While the video is entirely in Russian, it gives a good impression of the situation at the airfield (via tambovwolf.livejournal.com). 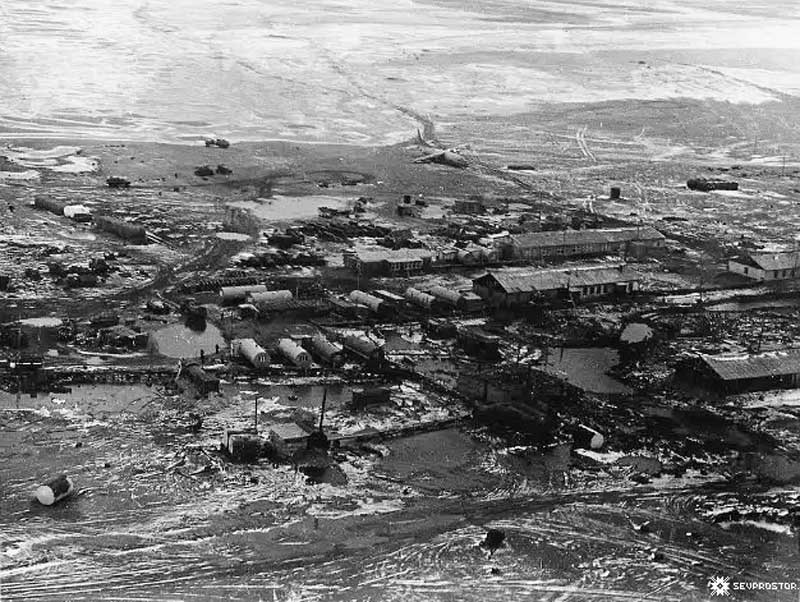 The airfield in one of its last summers of operation as a Soviet base. The crashed An-12 is already on the site, which somewhat helps date this picture (sevprostor.ru).
Before it was shut down it was also used for tourist helicopter trips around the Russian arctic as a stopover and refueling base, although it remained off limits to foreigners. The base was shut down completely in 1994. Today it is unused and falling into ruins which has closed Graham Bell Island to normal visitors. A Russian scientific expedition inspected the site in the autumn of 2004 and found isolated instances of PCB contamination from discarded chemical drums. In 2012, the Russian Air Force decided to reopen Greem Bell airfield as part of a series of reopenings of air bases in the Arctic. 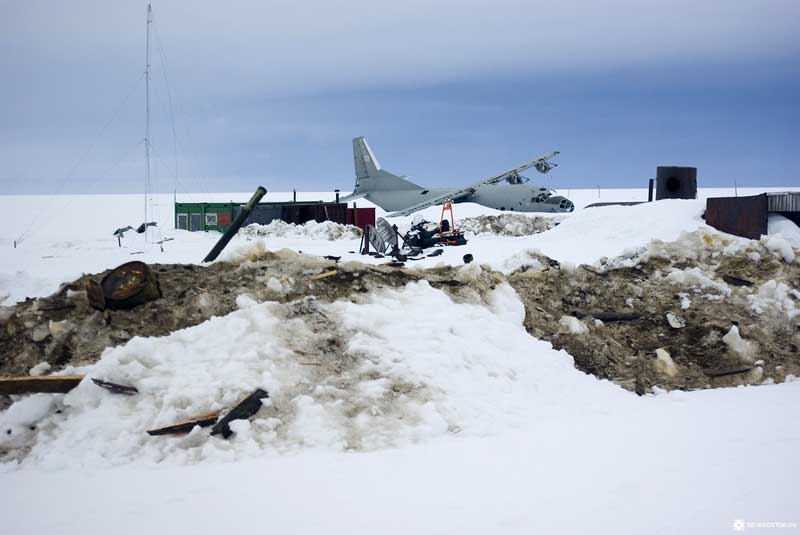 This An-12 still carries its Soviet era 'SSSR-11994' registration with small Aeroflot titles, giving some clue to when the aircraft crashed just outside the camp. Still, it is in a remarkable condition (sevprostor.ru). 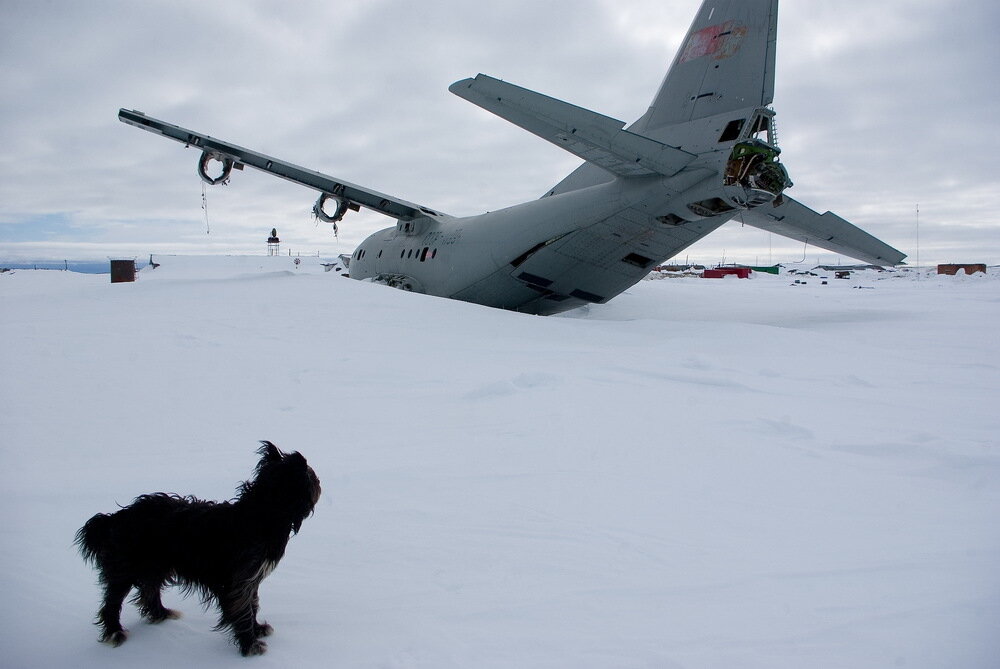 The An-12 is the largest man-made object on the island. It was still lying in front of the base command building at Greem Bell in 2013 (more photos at ru-abandoned.livejournal.com).
contact us about this airfield