Naval Aviation Station (German: Seefliegerhorst) Großenbrode (also known as Land- und Seefliegerhorstes Großenbrode (Grossenbrode)) was an airfield in the town of Großenbrode, north of Lübeck on the coast of the Baltic Sea.
During World War II it was a naval base for the Kriegsmarine, built between 1937 and 1942. It bordered on an inlet of the Baltic Sea, which had ideal circumstances to practice takeoffs and landings on water. At the same time it also had two crossing runways. The station came under military command in August 1938 and 10 months later the Air Torpedo School (german: Lufttorpedoschule) was opened. On 15 October 1941 the Lufttorpedoschule got its air wing; KSG2 (Kampfschulgeschwader 2) with 2 Training Groups (Lehrgruppen).

Only 6 weeks later the Wing got deployed to Grossetto in Italy. In March 1942 the "Lufttorpedoschule der Luftwaffe" was renamed to "Flieger Waffentechnishe Schule 3 (Fl.Waff.T.S.3)" or Aviator Weapon Technics School. It kept this name until the end of the war.
Großenbrode did not at any time during the war have any units of its own assigned. Instead, the installation and its facilities were to:
- give basic and advanced courses to aircrew in dropping airborne torpedos (LT or Luft Torpedos, until 1941)
- give basic and advanced courses to groundcrew in handling airborne mine laying (LM or Luft Minen) and airborne torpedoing (LT-) aircraft
- conversion of aircrew to new or different aircrafttypes
- conversion of different aircrafttypes
- replacing and retraining of Squadrons and Groups
- working up of operational squadrons

Unfortunately no images of the airfield while in use were located

When airborne bombardments of the Third Reich intensified, especially at night, the Seefliegerhorst required some form of protection.
As it was fully night operations equipped it became an auxiliary base to the 2. Jagddivision (2 Fighter Division)
Addittionally units of the Mine Detaction Group MAUSI were stationed at the base to clear the sealanes in the Kiel and Lübecker Bight from enemy magnetic mines.
The base was not of great importance however: in the period 1944-1945 only 3 Allied air strikes took place at the base.
The airstrike at 12:45 (local time) on 25 August 1944 largely missed the base and the town, although two people were killed
The airstrike at 22:45 (local time) on 26 April 1945 by the RAF was aimed at the over 100 aircraft that had moved in from elsewhere.
Pathfinder aircraft dropped their 'Christmastrees' but because of the wind they drifted over the village, causing 28.6tons of high explosives, 0.7tons of incendiaries and 11 air mines to be dropped there. Aside from the destruction on the ground at least 12 people lost their life. During recovery work the next day time-delayed fuses went off and caused more destruction. Litterally on the last day of the war, on 3 May 1945 around 21:00 (local time) 24 fighterbombers of the RAF from Faßberg (Fassberg) attacked the air base using their guns. During the bitter air battle that followed (according to English reports) a large number of German fighter aircraft were shot down, and many others that were still on the ground were destroyed. However: Of the 24 aircraft that had taken to the skies at Faßberg, only 13 returned, some of which were badly damaged.

After the war the airbase was largely demolished. The aviation terrain was used as a terrain where trains were on- and offloaded onto/from ships for the service to Gedser in Denmark. Later the Bundesmarine (Federal German Navy) used the terrain and its barracks until 1995. Next to the Marine the Luftwaffe also used the barracks, but they stayed until 2004. At the Fehmarnsundkaserne Fernmeldregiment 71 was based in charge of Fernmeldesektor A. Working from a 12-storey tower, which the townsfolk called the Ghostviewer (german: Spökenkieker), they were doing electronic intelligence gathering on objects upto 600kilometers away. The tower was one of 5 such towers along the German/German border. It was sold in the 2004-2010 time frame. For the Feldmansundkaserne a civilian role is under development. 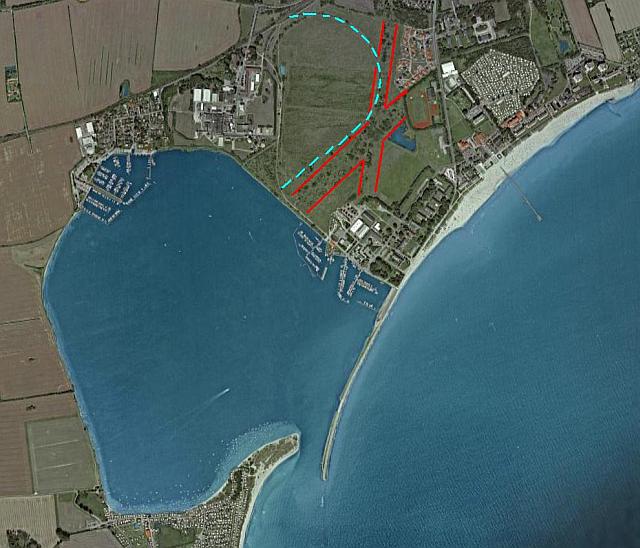 Now abandoned site of Land- und Seefliegerhorstes Großenbrode in 2010. Despite having been removed over 50 years ago the outlines of the railroad to the train ferry (dotted blue) and the locations of the runways (red) can still be recognised from the air (Google Earth).