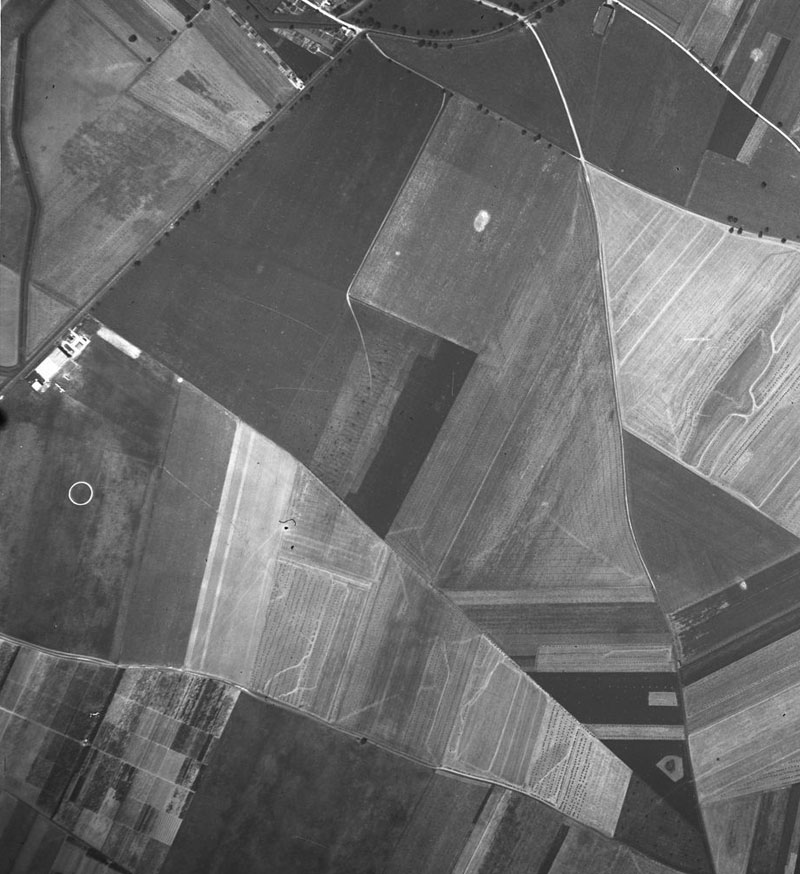 1933 aerial view of the airfield. On the left side of the photo, the hangars are visible. In the center of the airfield, a large concrete circle indicates the presence of the aerodrome (geoportail ign.fr).

Open to public air traffic, the aerodrome then covered 24 ha. 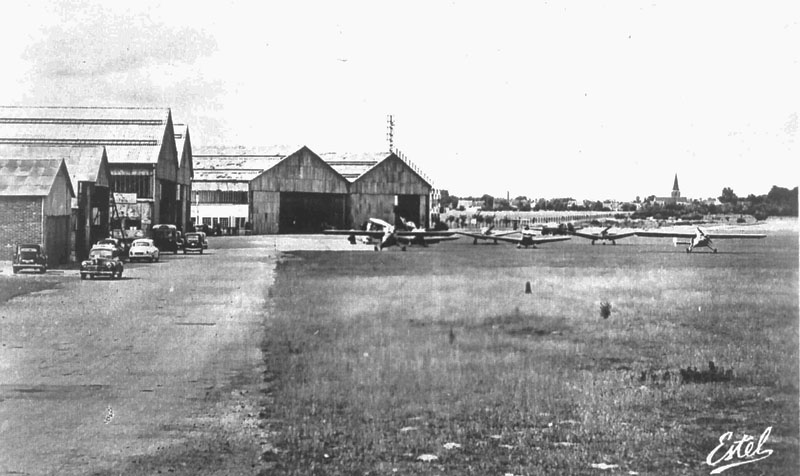 Car manufacturer Renault supplied the engines for the Caudron aircraft built here. As a result, the aerodrome was named "Aérodrome Caudron - Renault". 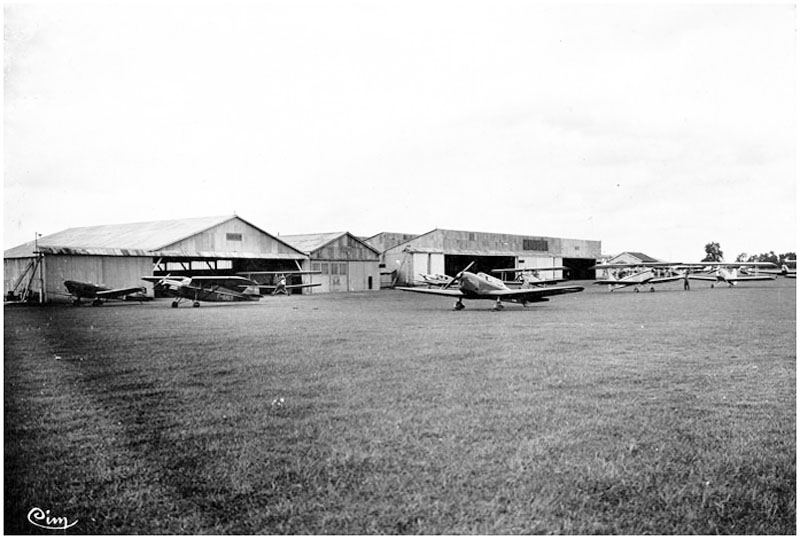 The Guyancourt estate was enlarged to the north and east by 68 ha, acquired by the Renault factory company, which bought the 24 ha of initial surface area from the Caudron aircraft. 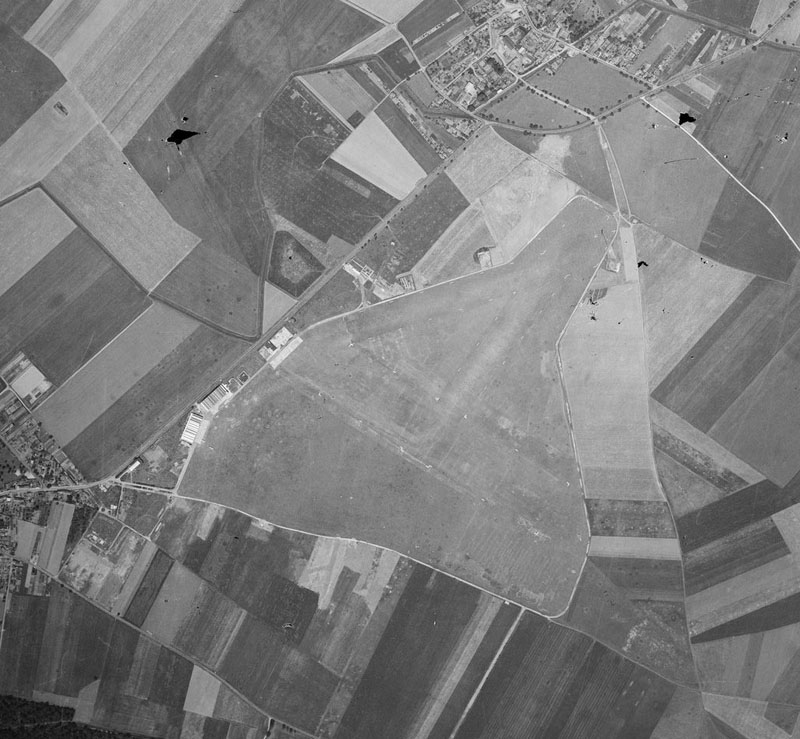 During the occupation of World War II, the German forces extended the aerodrome, increasing its surface area to more than 200 ha.
The Luftwaffe was content with three strips of grass, but also equipped the area with about twenty dispersed areas, half of which were along the peripheral road, half of which were in the south on the properties of La Croix du Bois and the castle of Menirais. In 1944, the US Army Air Forces occupied an equally substantial surface.

At the end of the war and after a short period of requisition, the Air Ministry transferred the administration of the aerodrome to the Department of Public Works on July 19, 1946.
It was already carrying then only on an area of 145 ha. After several successive extensions, this requisition will end on December 31, 1950, when the occupied land will only represent 105 ha. 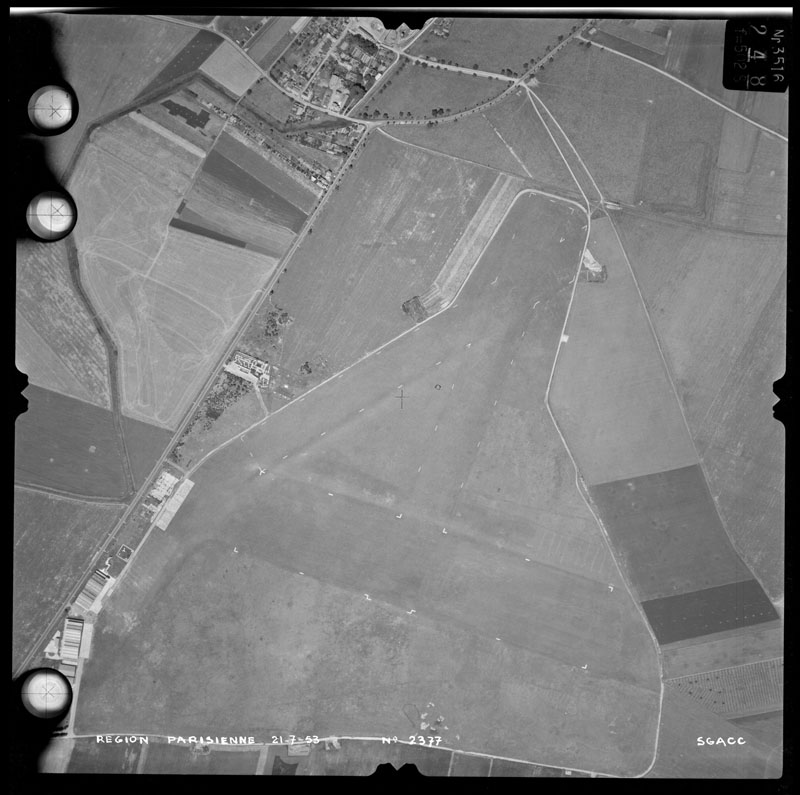 Although threatened by urbanization and assigned to Paris Airport, Guyancourt aerodrome would see its existence become indefensible when, in 1965, the first master plan of the Paris region did not include the airfield. 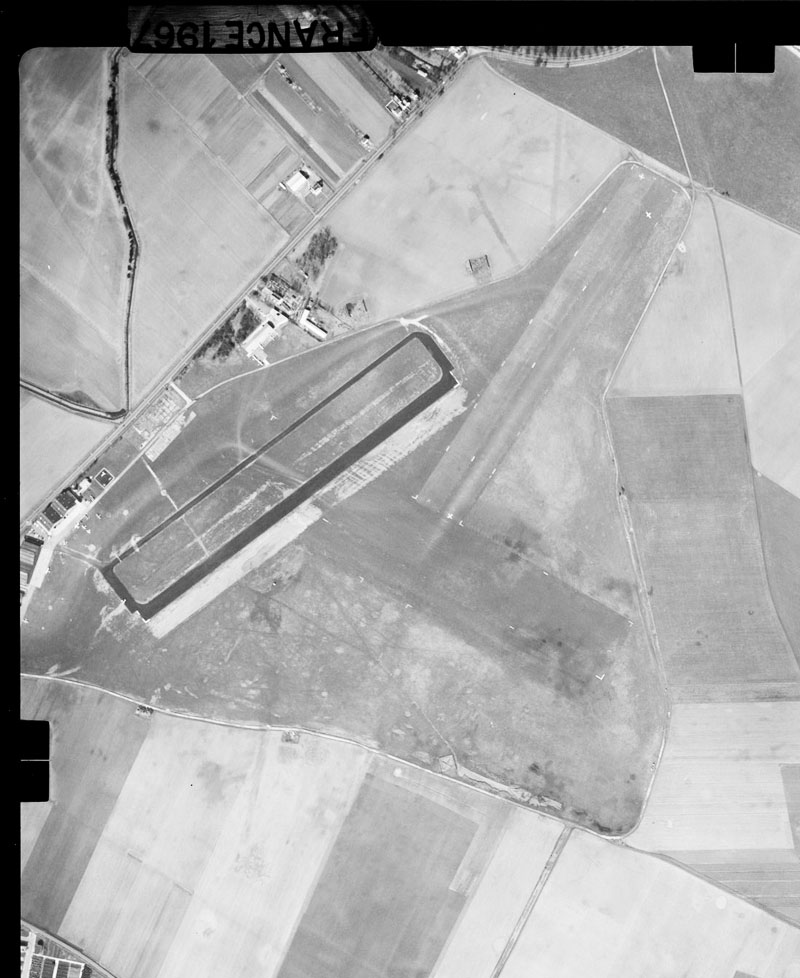 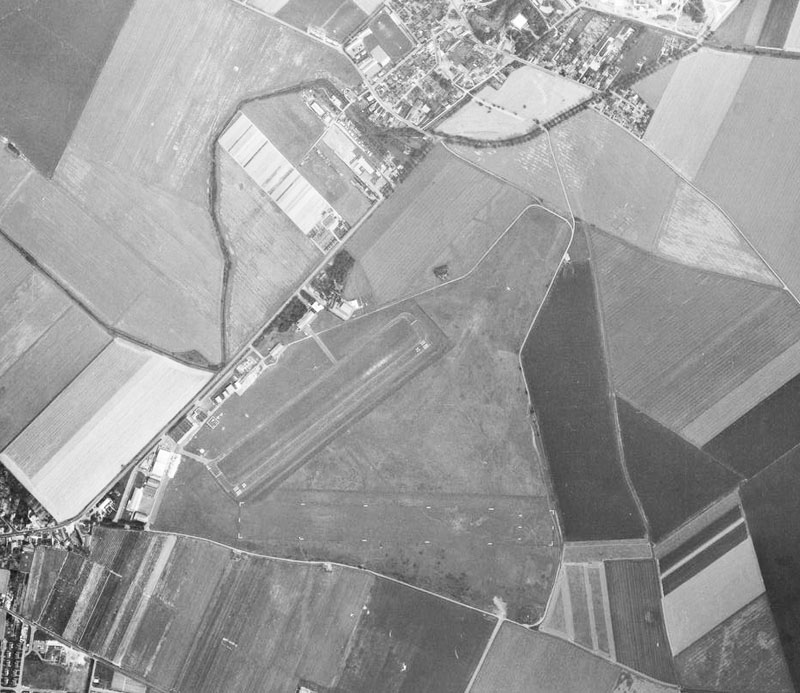 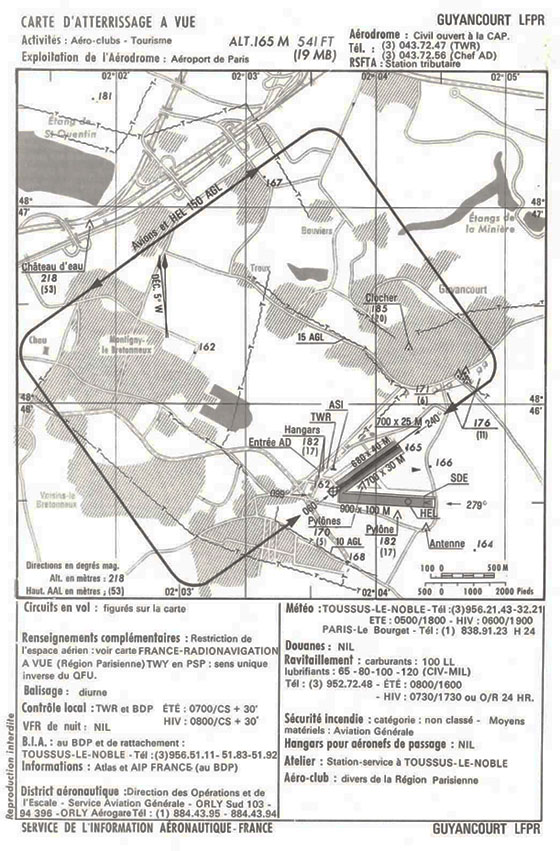 Undated photo - The aerodrome shortly before it closed. Note that there was only one track laft; the grass tracks had already disappeared. (Frédéric from http://sgmec.free.fr/ )
(To Frédéric: Both mail available on your website no longer work. Can you contact us, please?) 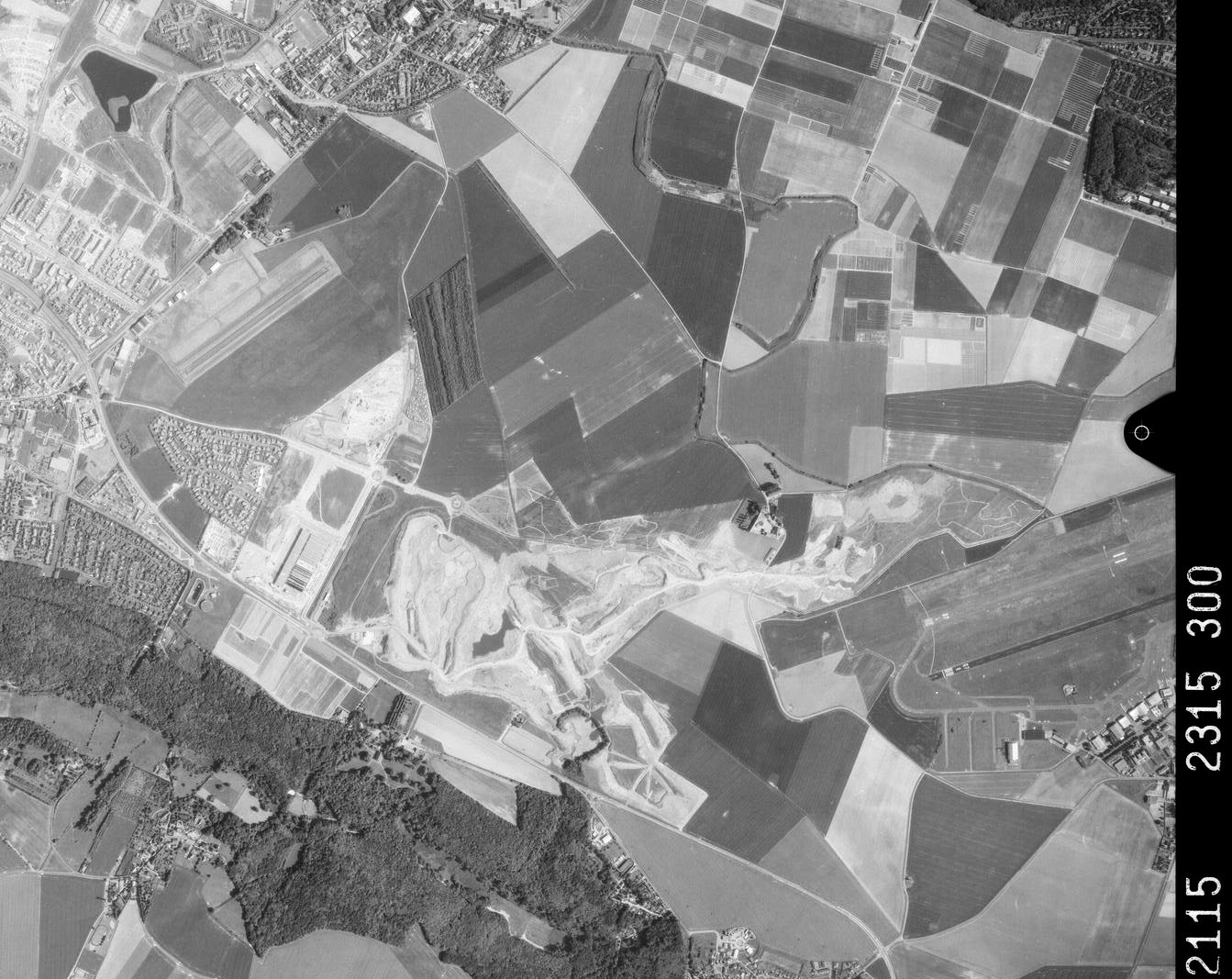 1989 - Aerial view (geoportail ign.fr) of Guyancourt airfield, visible on the upper left side and Etampes visible on the lower right side. Both these airfields was to close to the town and the smallest was closed.

The verdict about the existence of the airfield ultimately took twenty years to take and then another four years to be executed. On June 3, 1985, the Minister in charge of Transport - but also for Environmental Planning - officially decided the aerodrome would have to close and it's flying club activities would have to transfer to Étampes-Mondésir. Also, by two ministerial decrees of 7 August and 2 October 1989, the Minister announced that Guyancourt to public air traffic and will decommission it from the aeronautical public domain in November 1989. 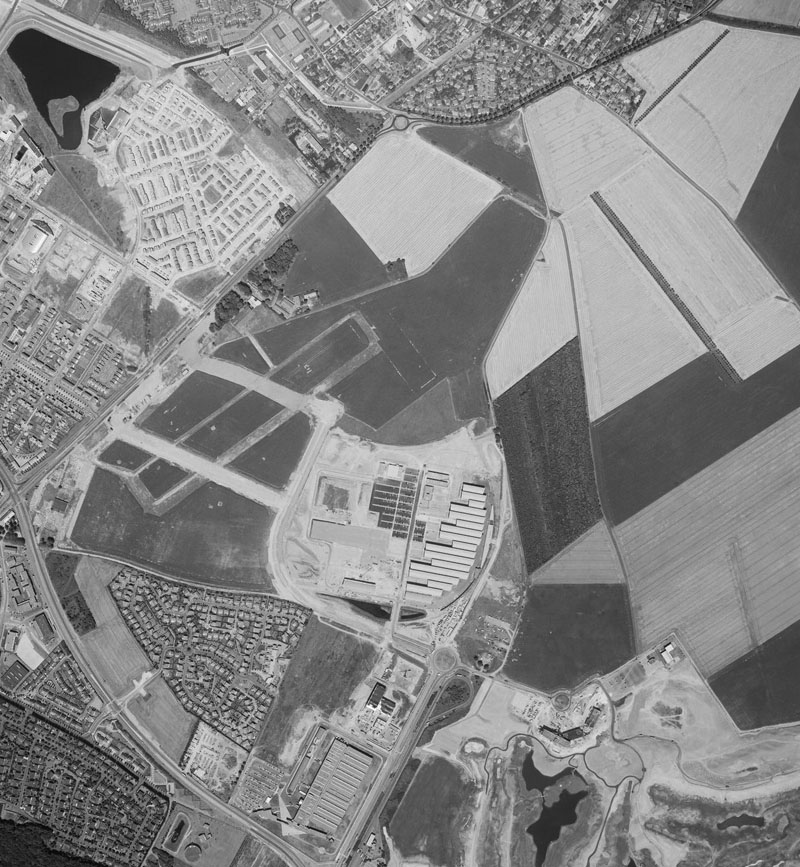 1990 - Aerial view (geoportail ign.fr). One year after closure, the redevelopment of the land was progressing well. the runwaytrack and taxiways are still fully recognisable. 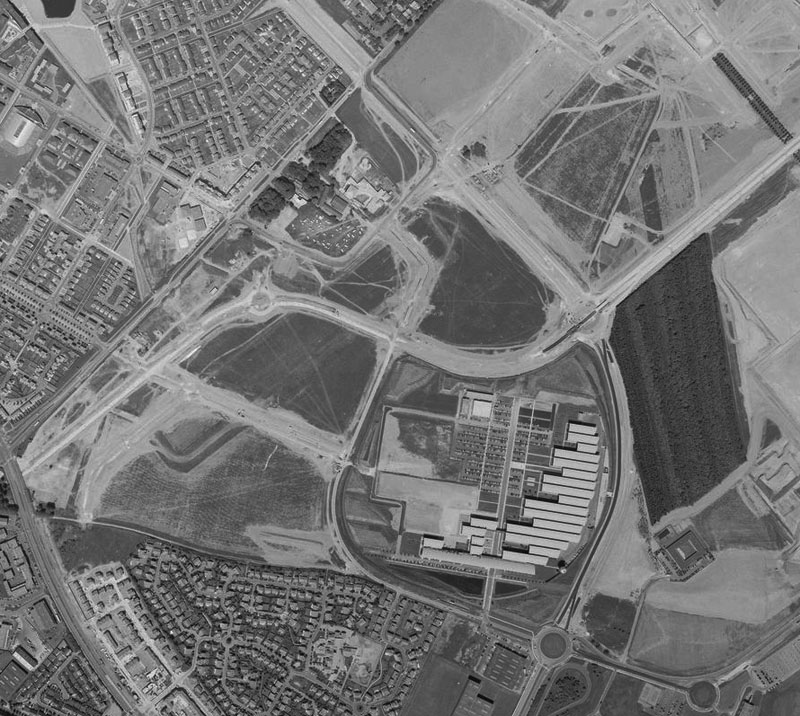