Hardwick airfield (also known as Royal Air Force Station Hardwick or RAF Hardwick) was an airfield 130 kilometer north of London.
Construction of the airfield began in 1941.

It was one of the early heavy bomber airfields constructed for the RAF during 1941-42 in the East Anglian area. Like other heavy bomber fields originally planned for RAF needs and begun at the same time, this airfield had three T-2 hangars grouped together on the administrative and technical site on the eastern side of the airfield. The technical site was adjacent to the hangars and bordered the country road running from Hempnall to Alburgh. On the eastern side of this road were the domestic sites hidden amongst woodland. All accommodation was of the temporary type, mostly Nissen huts. The bomb dump was situated off the north-west corner of the airfield in and adjacent to Spring Wood.
Originally, thirty aircraft parkings planned, which should have been sufficient for RAF requirements. But these were increased to fifty-one for the United States Army Air Forces Eighth Air Force, thirty-nine being of the early 'frying-pan' type and the remainder loops. 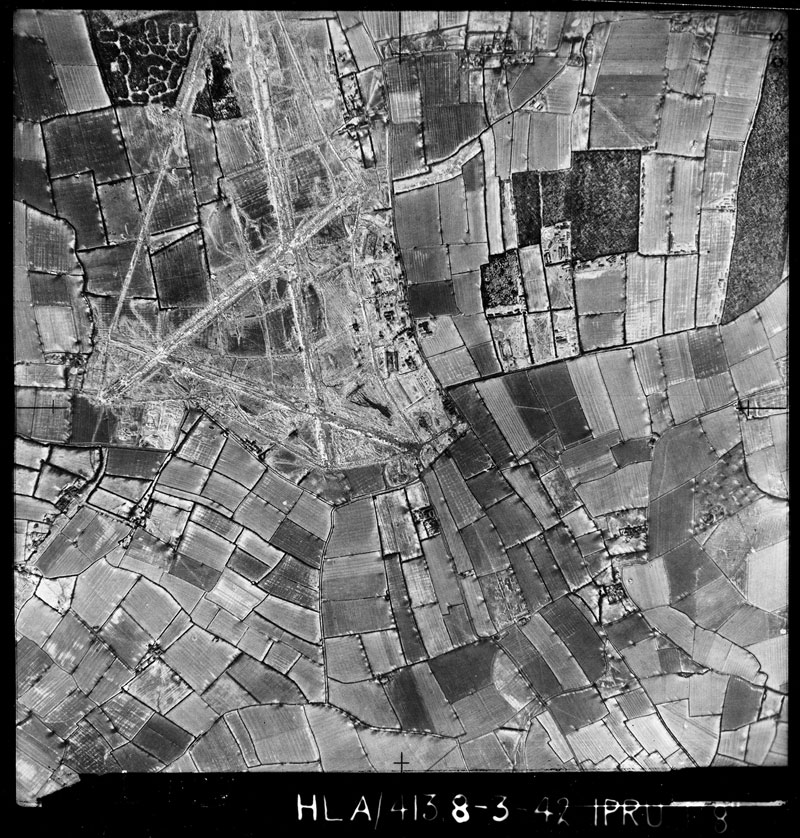 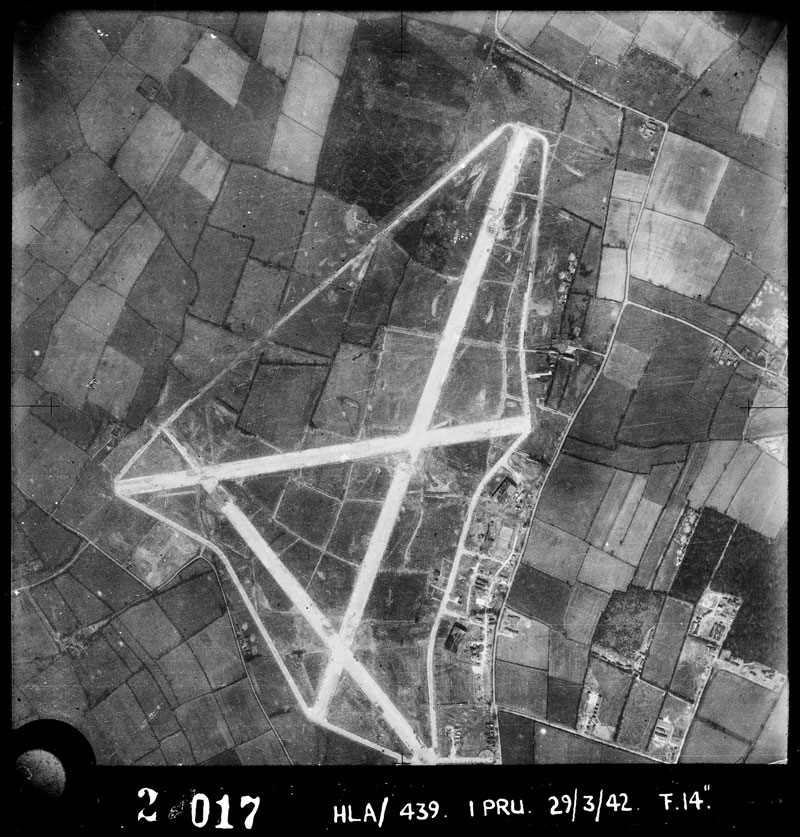 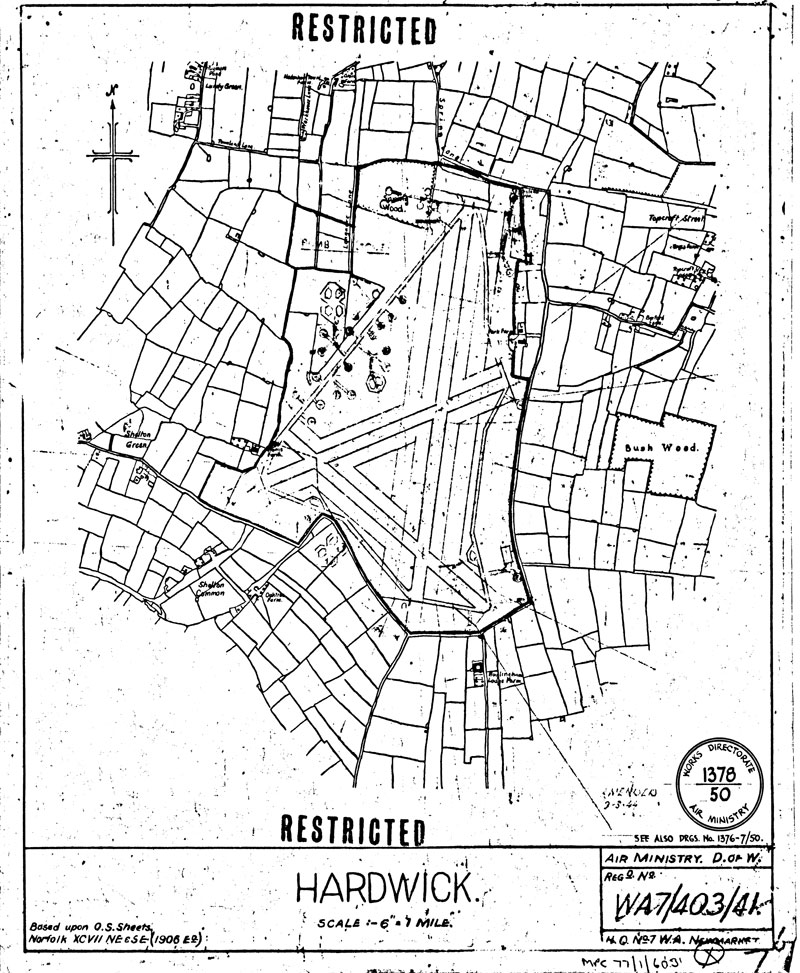 March 1944 plan for Hardwick. as only aircraft parkings on the northwestern perimeter track are drawn in, one might suggest tht this is a plan for some type of rework of these parkings (americanairmuseum.com). 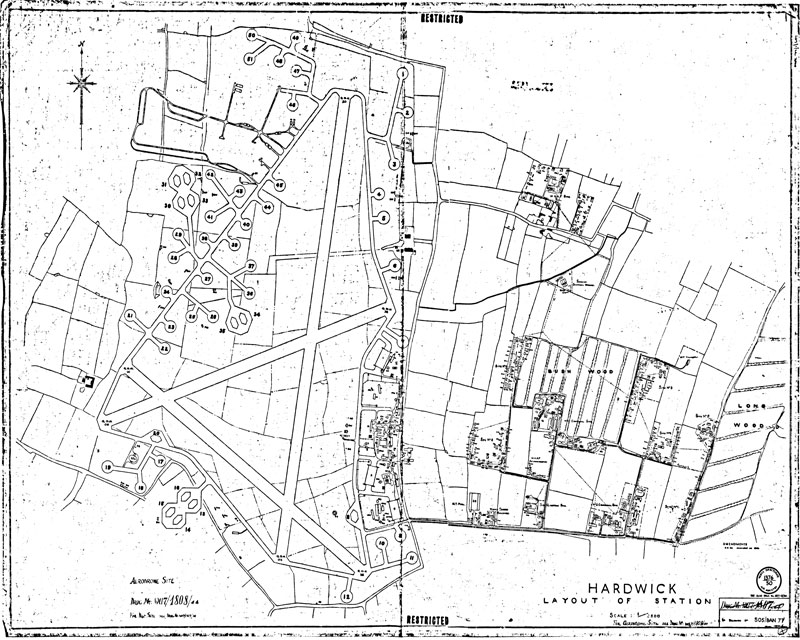 plan of the entire airfield, including the domestic sites to the east (americanairmuseum.com)

A large detachment was sent to North Africa in December 1942, where the group received a Distinguished Unit Citation for operations in that theatre between December 1942 and February 1943. The detachment returned to England in February 1943 and until the end of June the group bombed engine repair works, harbours, power plants, and other targets in France, the Low Countries, and Germany.
A new detachment returned to the Mediterranean theatre during June and July 1943 to support the Allied invasion of Sicily and to participate in the famous low-level attack on enemy oil installations at Ploesti on 1 August and was awarded a Distinguished Unit Citation for the operation. Lt. Col. Addison E. Baker, group commander, and Major John L. Jerstad, a former member of the group who had volunteered for this mission, were posthumously awarded the Medal of Honor for action in the Ploesti raid. After the detachment returned to England in August 1943, the group flew only two missions before the detachment was sent yet again to the Mediterranean to support the Fifth Army at Salerno during the invasion of Italy in September 1943. The detachment rejoined the group in October 1943.
From 7 November 1943 through 12 June 1945, Hardwick served as headquarters for the 20th Combat Bombardment Wing of the 2d Bomb Division. From the end of 1943 until April 1945 the 93rd concentrated on bombing strategic targets and cities in Germany. In addition it bombed targets near Cherbourg during the Normandy invasion in June 1944. It attacked troop concentrations in northern France during the Saint-Lô breakthrough in July 1944; transported food, gasoline, water, and other supplies to the Allies advancing across France, August - September 1944; dropped supplies to airborne troops in the Netherlands on 18 September 1944; struck enemy transportation and other targets during the Battle of the Bulge, December 1944 - January 1945; and flew two missions on 24 March 1945 during the airborne assault across the Rhine, dropping supplies to troops near Wesel and bombing a night-fighter base at Störmede.
The 93d Bomb Group ceased combat operations in April 1945, and returned to Sioux Falls AAF South Dakota during May/June. 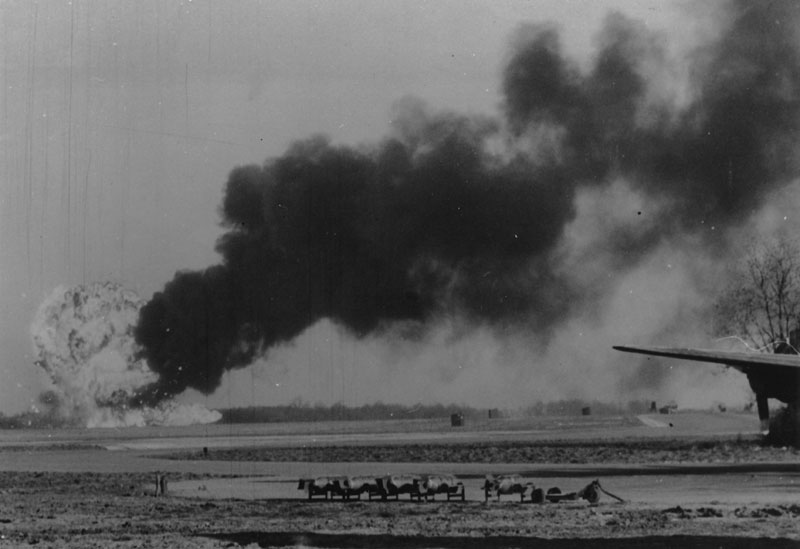 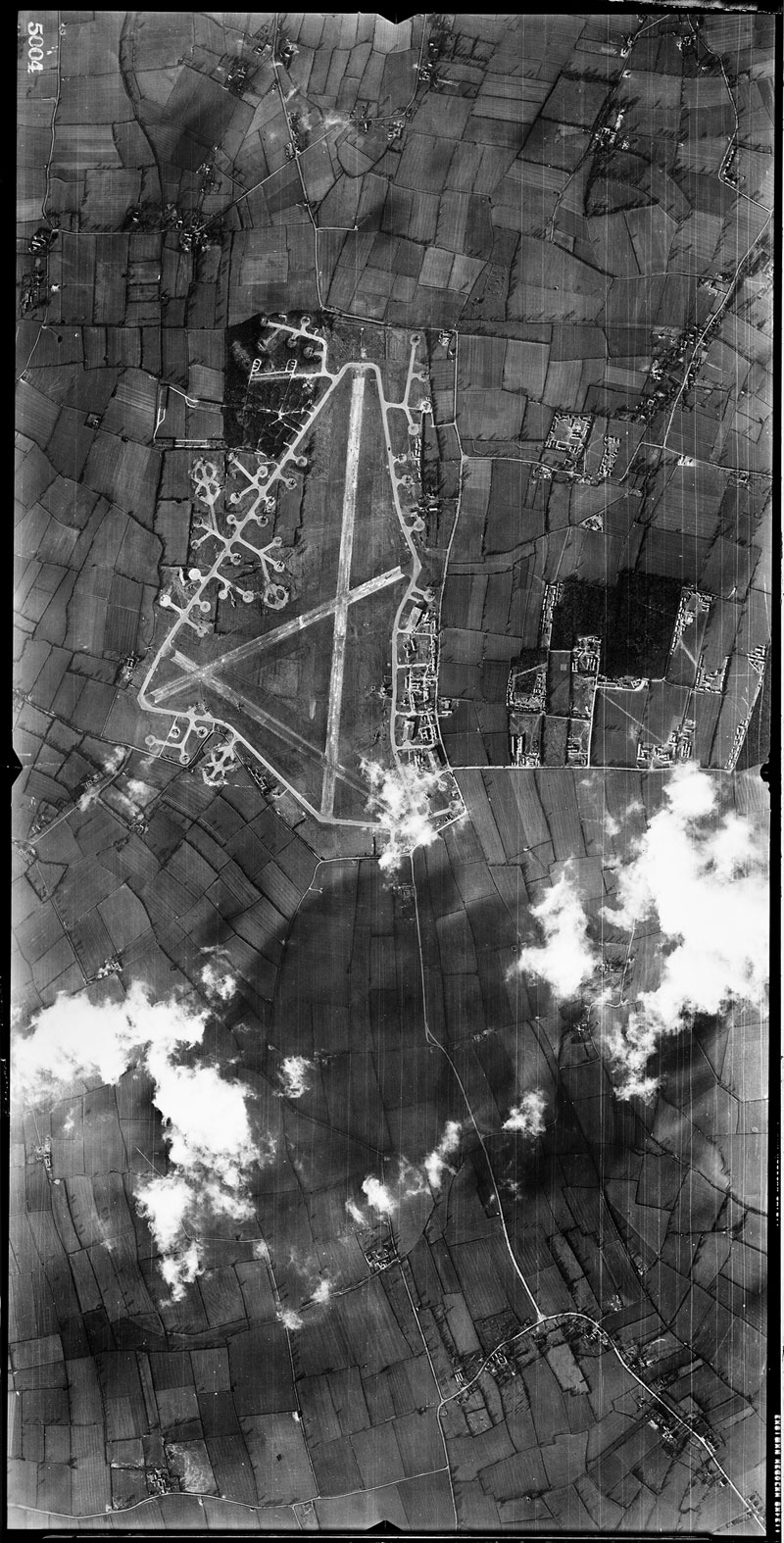 Aerial photograph of Hardwick airfield looking north, the main runway runs vertically, with the technical site immediately to the right, the bomb dump is upper left, 2 March 1944. Photograph taken by 7th Photographic Reconnaissance Group, sortie number US/7PH/GP/LOC189 (USAAF photography, via americanairmuseum.com).
After the war, the field was turned over to the RAF on 25 June 1945. The station was immediately put into care and maintenance status, and was eventually closed in 1962. With the end of military control, the main airfield buildings, hangars, control tower, etc., were demolished. However, on some of the dispersed sites to the east of the airfield quite a number of the buildings remain and are used by a farmer for a variety of purposes. 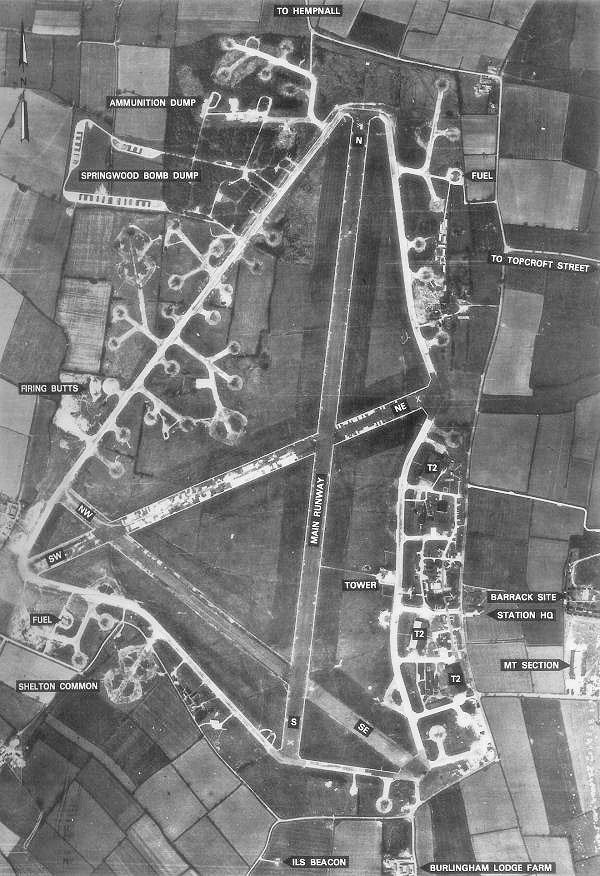 Hardwick on 16 April 1946. The airfield is closed, as indicated by the X's on the thresholds (wikipedia.org)

Most of the aircraft parkings have gone. The main runways (with the exception of one which remains almost complete) and taxiways were broken up for aggregate and used for various construction projects.
A company by the name of Mindacre Ltd., run by Mr. Roy Slarke of Bungay, used the airfield as their main base for aerial application operations, and had at one time six Cessna A188 Agwagons stationed at field. Pilots and engineers from both the UK, Norway, Australia and New Zealand had Hardwick as their home base, and carried out aerial application contracts all over the UK. In 1973 the company won a contract spraying cotton fields in the Gezira, Sudan, Africa, and four Agwagons and one Cessna 206 departed Hardwick and flew to the Sudan, returning six months later. 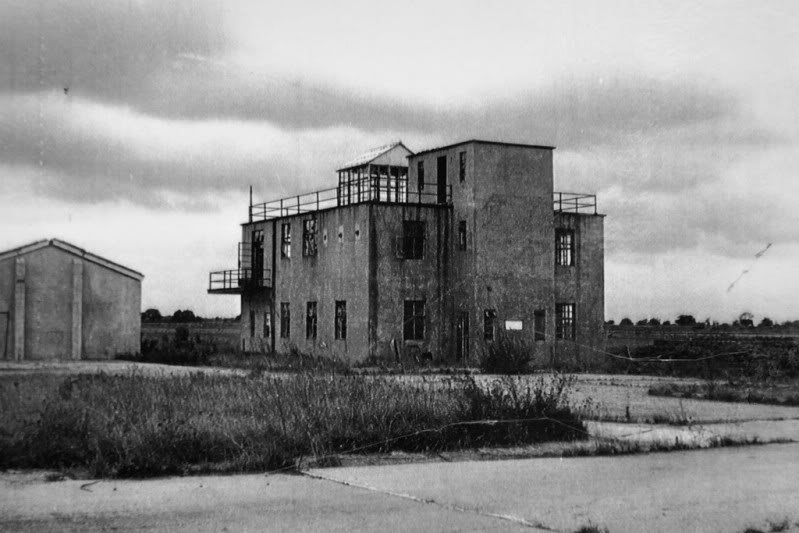 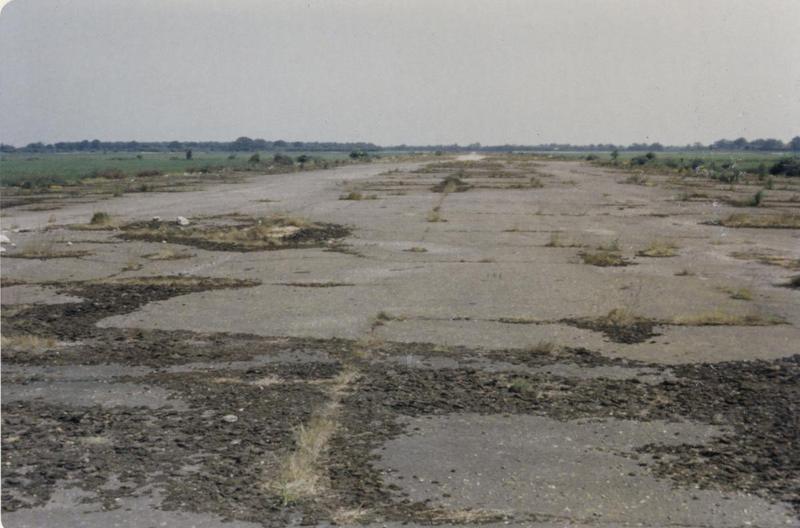 The runway at Hardwick airbase, home of the 93rd Bomb Group, photographed in June 1967 (americanairmuseum.com).

A stone memorial plaque was dedicated during a veterans' reunion in 1987. It stands in a small plot on one of the old barrack sites just off the lane from Hempnall which runs to the east of the airfield. A small private museum has been established in some of the remaining Nissen huts on one of the dispersed sites on Airfield Farm. It contains general 8th A.F. memorabilia, material on the 93rd B.G., and items recovered by the East Anglian Aircraft Research Group.
The 14/32 runway continues to be used  for a private airfield to this day. 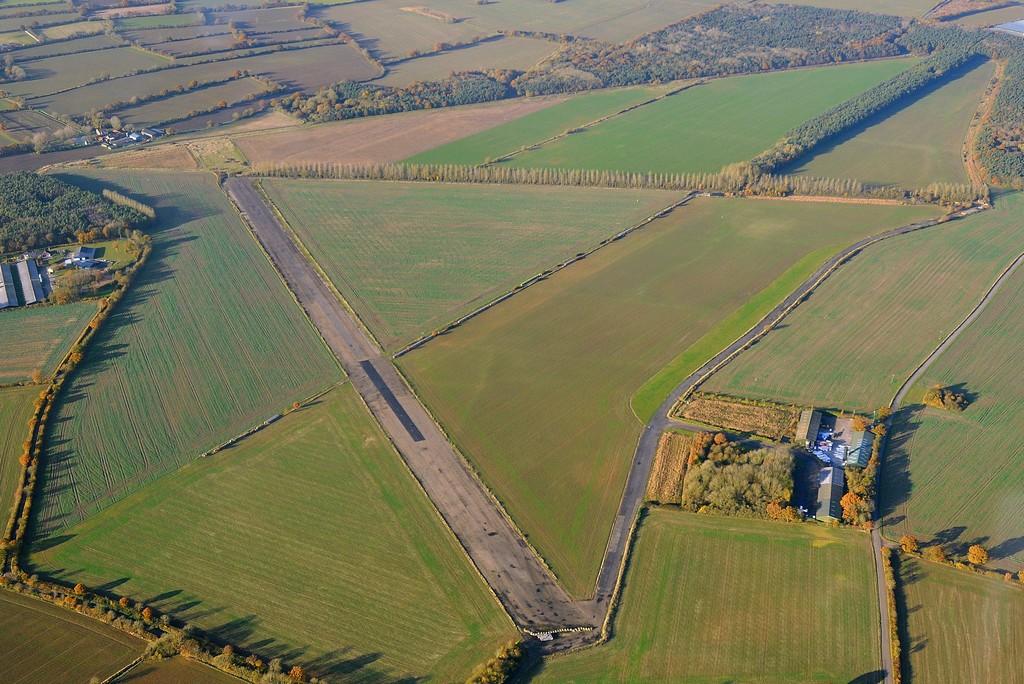 Hardwick was still easily recognisable in 2011 (Richard E. Flagg)
contact us about this airfield