51°50'19"N 008°41'04"ERunway: landing pads - steel matted
Runway: 1200m stretch of highway - concreteHövelhof Highway strip (german: Autobahn-Behelfslandeplatz Hövelhof) was a stretch of highway (german: Autobahn) in the Autobahn A33, between the intersections of Bielefeld and Paderborn.Because NATO planners feared a Soviet surprise attack might render NATO airfields unusable a number of preplanned emergency airstrips were constructed in Germany's extensive Autobahn network. At a glance they would appear to be normal stretches of Autobahn, but they were rapidly convertible into runways, capable of handling NATO aircraft. In the case of Hövelhof, a car rest stop and a 1200 meter stretch of Autobahn would be converted into a STOVL runway with aircraft platforms, on either side of the road. In the Central Region, the STOVL concept was only exercised by RAF Harrier squadrons. Being highly mobile, they were not relying on prepositioned infrastructure. Instead they used large and easily transportable bladders with aviation fuel and infrastructure on trucks

Despite being a normal highway, this site was used at least once during exercise "Cold Fire" in 1985. The parking on both sites was used as a logistic site and the highway served as a 1100 m runway for the Harriers. In addition to the Autobahn, the squadtrons also used steel matted landing pads in the woods next to the runway. 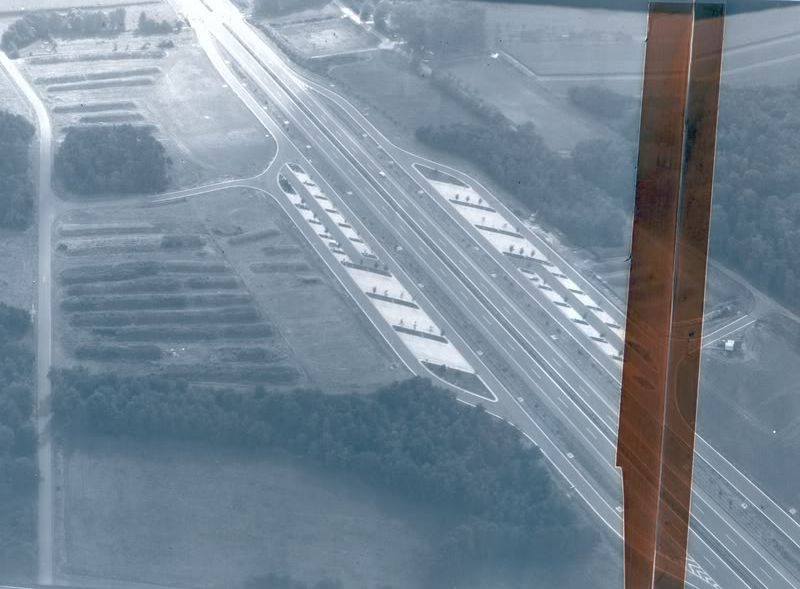 The parkings along the A33 near Hövelhof, looking south. These were used as a logistics site during Cold Fire 85, while the runway in between served as a runway for RAF Harriers of RAF Gütersloh. This composite photo was shot from a Harrier (which had a secondary reconnaissane role and made of two overlapping shots, hence the aged dark tape (PPRuNe).

A BAe Harrier GR3A near the parking area (Parkplatz) on the southbound lane of the A33. Notice the power cables close by in the background (PPRuNe).

Today, the parking areas still exist, although they were expanded. The Autobahn stretch that served as a runway appears undiscernable from any other highway in Germany.