Air field Herzogenaurach (german: Flugplatz Herzogenaurach, also known as Fliegerhorst Herzogenaurach, Army Airfield Station Herzogenaurach, Herzogenaurach AHP and 'Herzo Base') was an airfield in Herzogenaurach, Bavaria, Germany
The airfield was built in farm fields in 1934 by the Luftwaffe under the guise of an emergency landing field, because Germany was not allowed to have an air force under the Versailles treaty. It was soon obvious the construction went far beyond what was required for an emergency landing site though, and the existence of the new Luftwaffe was unveiled in 1935. It was built around a grass flying field (with bricks underneat to harden the field) with a maximum rolling distance of 1000meters. To the north the hangars and the logistic site were built, on the west site, near the entrance of the airfield was the home of the base commander and those of his officers.
Duing the war the airfield was expanded, and included several bunkers for command, shelter and ammunition storage. Camouflaged aircraft parkings were provided in the forest on the east side of the airfield.

Unfortunately no World War II photos of the airfield were located 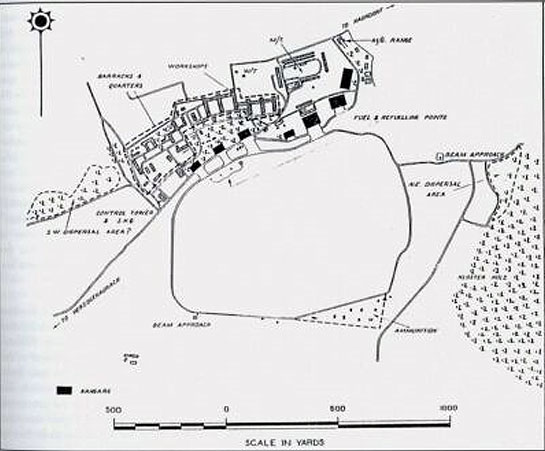 plan of Herzogenaurach in 1944

A flying school settled at the airfield in 1936, and the first operational fighter wing was stationed at the base in 1938. Jagdgeschwader 54, or JG54 took part in the Poland campaign as a fighter bomber unit, and to protect the homeland from Polish counter attacks JG70 was founded in advance on 15 July 1939. Between June 1940 and March 1943 the base was only home to a fighter training school (I./JFS4). Fourth Group of JSF4 was founded in January 1940 and upgraded to a full fighter wing (JG104) in March 1943.
Although Allied aircraft penetrated deep into German airspace from 1943 the airfield was saved from destruction. The only attack on Herzogenaurach was an attack with incendiaries on 25 February 1943, which only caused two harmless bombcraters on the edge of the airfield.
Reconnaissance groups were stationed at the airfield in 1943 and 1944, until as part of the Defense of the Reich, JG5 and JG300 were stationed at the airfield from 1944 onwards. Because of the increased risk of attacks many personnel were quartered in the city. The last reconnaissance unit left the airfield in March 1945, and out of fear for the rapidly approaching US forces JG104 left in April. On 12 April 1945 the last commander of the base wrote the town major: "After we've blown up the airfield, you can use the equipment in the barracks for your numerous refugees".
The destruction of the airfield had been prepared, but was never executed. When the American forces occupied the city, only one hangar and two wooden barracks were destroyed. American aerial photo of Herzogenaurach in 1945, after the runway was lengthened to 2000 meters

The Allies had never considered fully destroying the base, although they knew exactly what was there. It is suspected that the use by the Allies was predetermined. The US Army occupied the terrain in 1945, and used it until 1992.
After the initial occupation of the city the American soldiers camped immediately next to the airfield. Only two weeks later new fresh troops (40 officers and 600 soldiers) arrived to occupy the airfield. They constructed a new runway of 2000meters, far beyond the edges of the airfield.
After the surrender of Germany units of the USAAF were tasked with disarming the German forces in the Disarmament Program. The US 9th Air Force stationed P-51 fighters (354FG) and B-26 medium bombers (320BG) at the airfield. The last units left in 1946 after which the base was transferred to the USArmy. 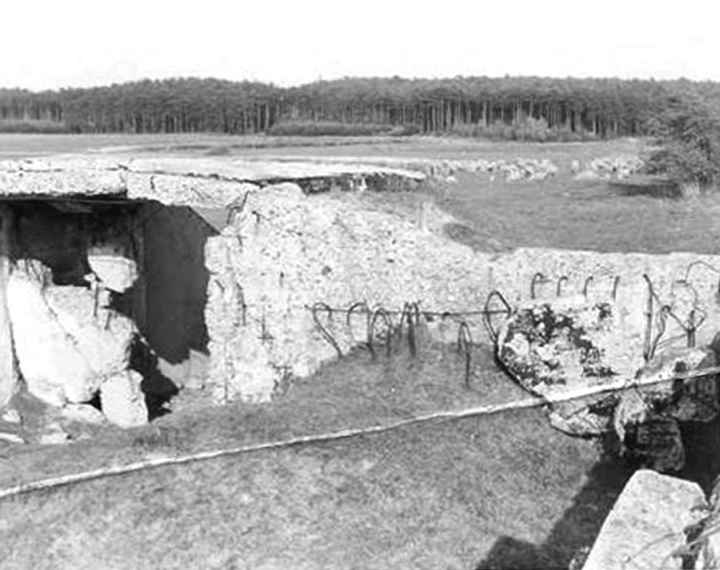 Many destroyed bunkers still littered Herzogenaurach in 1951, and access was strictly forbidden by base cammanders

The US Army used the former air base as a location for the USArmy Security Agency. They converted one of the hangars into an operations building, and used the air field as the location for an antenna array. In the 1950s it became a field of 160 antennas to listen to Polisch, Czech and Russian radio communications. Oddly enough they were guarded by a Polish guard company, consisting of Free Polish soldiers that remained in the west after the war. They enforced the security measures very strictly. The carreer as a listening post ended in 1972, after which the 210th Field Artillery Brigade took charge. They remained at the base until 1992, during which time they held a helicopter platform operational, known as Herzogenaurach AHP. 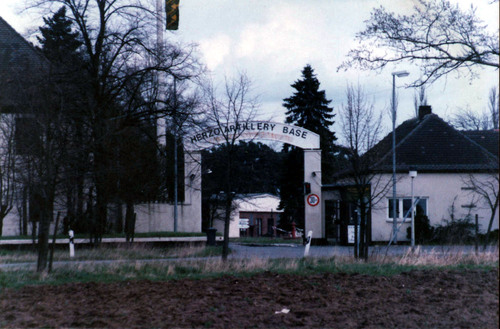 Entrance to Herzo Artillery base after the US Army left in 1994. 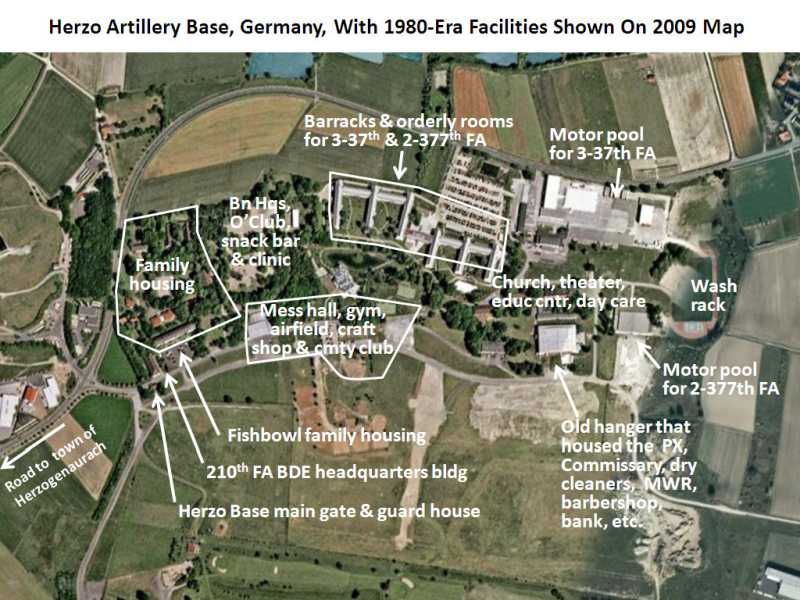 "Herzo Base" was then taken over by the Adidas sports clothing company. Over the past 15 years they converted the area almost beyond recognition. Most of the military buildings and hangars were demolished and replaced with modern production and office facilities. Some buildings remain, but were incorporated into more modern facilities. 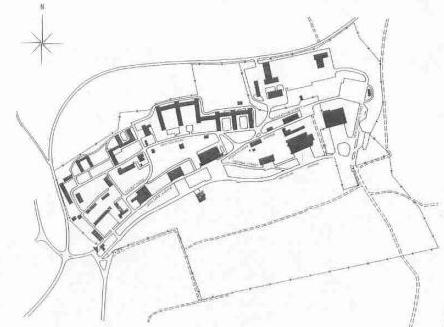 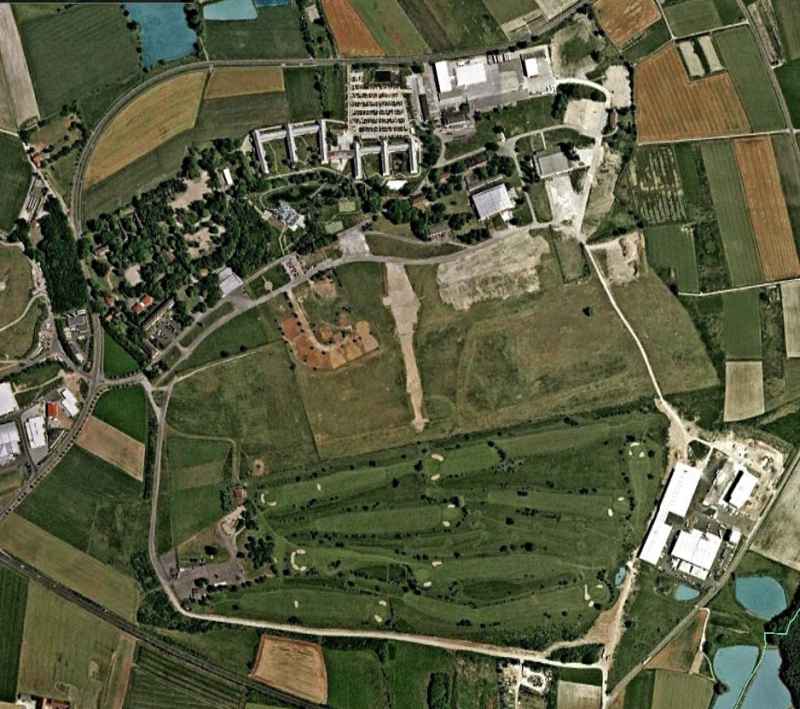 Herzo Base ca. 2001, when Adidas had not made many changes to the site yet. The south side of the field had been converted into a golf course (Google Earth) 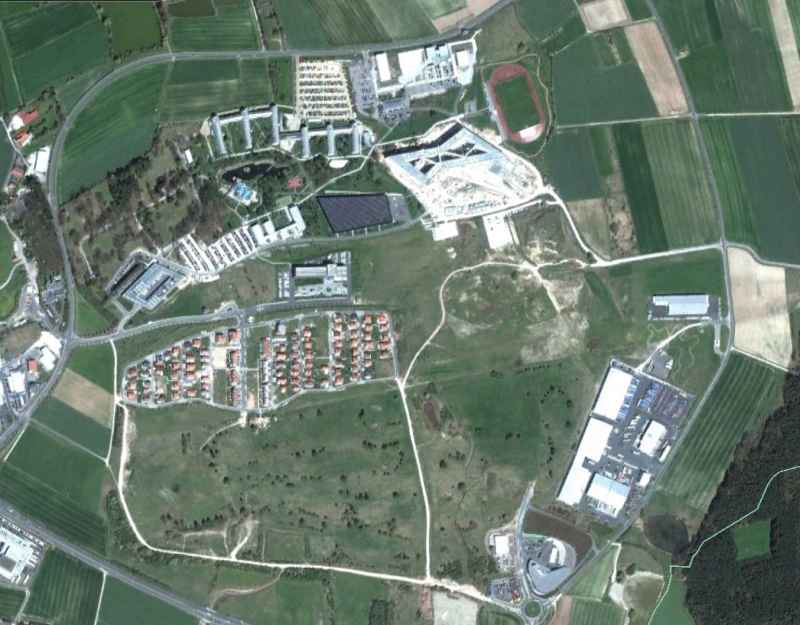 Herzo Base in 2010. The former base has changed dramatically in the past 10 years. On the right the outlines of the lengthened USAAF runway can be recognised in a field, and the golf course has all but disappeared.