Hethel air field (also known as Royal Air Force Station Hethel, RAF Hethel or USAAF station 114, ICAO: EGSK) was an airfield .... kilometer northeast of London.
RAF Hethel was built for Bomber Command between 1940 and 1942 and upon delivery it was transferred to the USAAF as Station 114. It had 3 runways, three T2 hangars and 36 aircraft parkings, which was increased to 50 by adding some 'loop'-type parkings, and a large bomb store site to the northwest of the airfield.
The 320th Bombardment Group (Medium) was a 12th Air Force B-26 Marauder group which gegan arriving at Hethel from 12 September 1942 from Drane Army Airfield in Florida. At the time of their arrival, many of the airfield buildings were still uncompleted. The group used the airfield as a staging, training and transit point for deploying to La Senia airfield, Algeria as part of 12th Air Force to 2 December 1942.
During the spring of 1943 Hethel housed elements of the 12th Air Force's 310th Bombardment Group (Medium) which also used the airfield as a staging area for deploying from Greenville AAF South Carolina to Mediouna Airfield, French Morocco.
In addition, the airfield was also used as a training airfield for B-24s by other 2nd Air Division Groups. 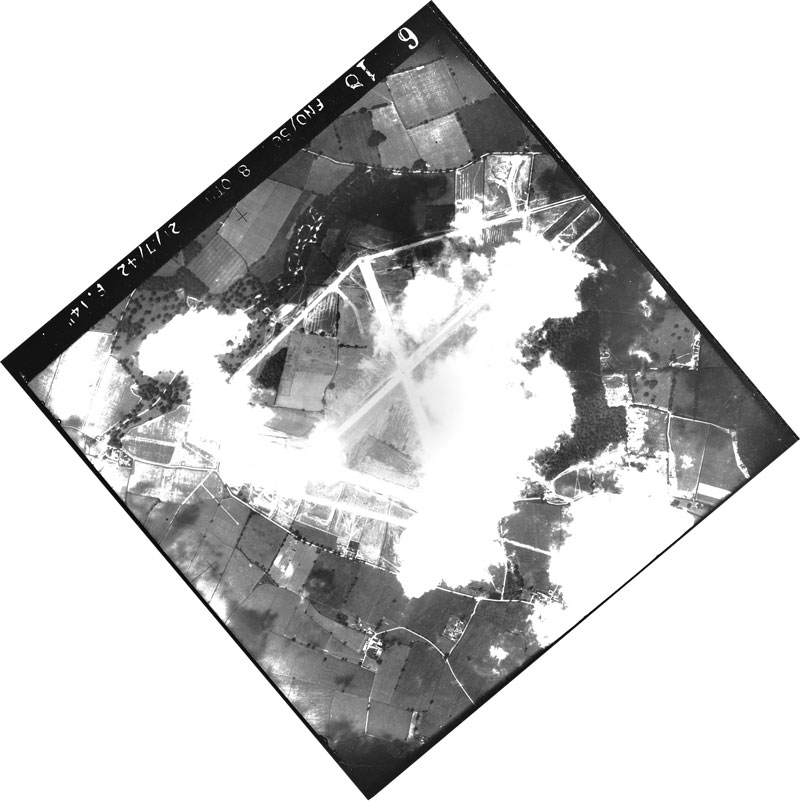 Aerial reconnaissance photo of Hethel on 21 July 1942, when the airfield was still under construction. Although partly covered by clouds, of immediate notice is the total absence of any aircraft parkings (americanairmuseum.com). 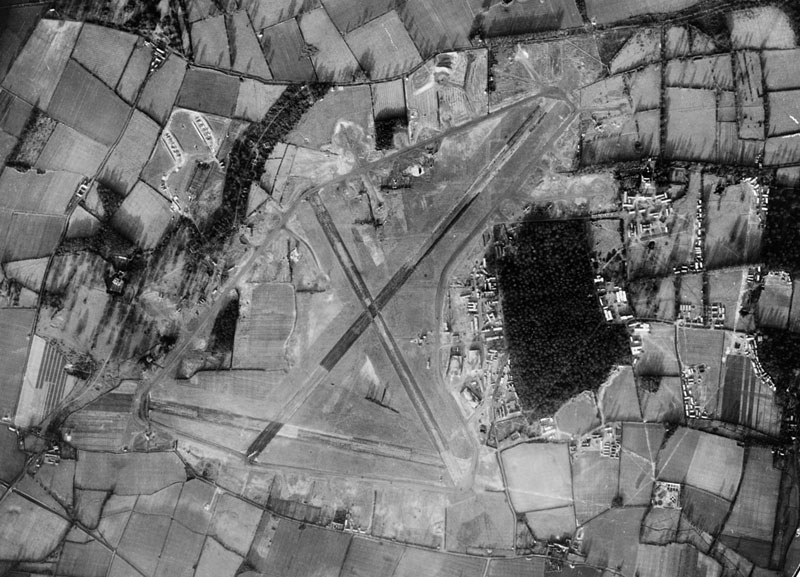 RAF Hethel on 29 December 1943. This photo is a crop of a larger image found on americanairmuseum.com 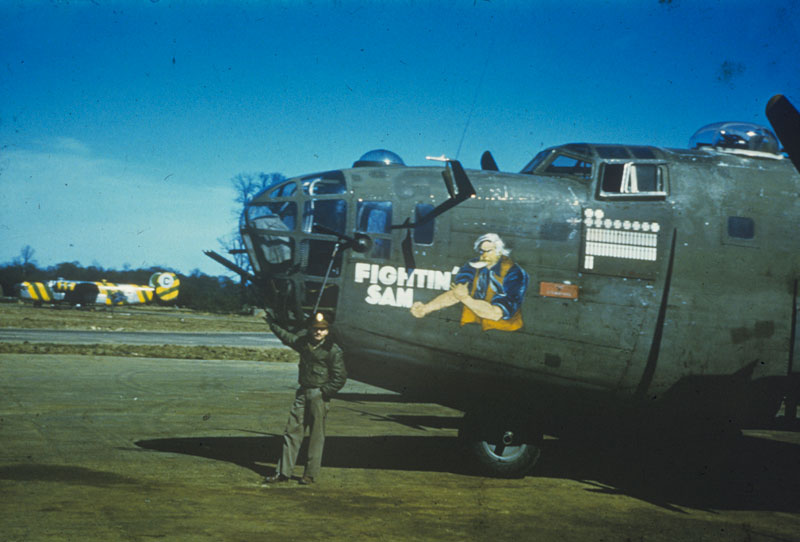 An airman of the 389th Bomb Group with the nose art of a B-24 Liberator (serial number 42-40506) nicknamed "Fightin' Sam". A B-24 used as a flight assembly ship is in the background to the left (Roger Freeman Collection at americanairmuseum.com). 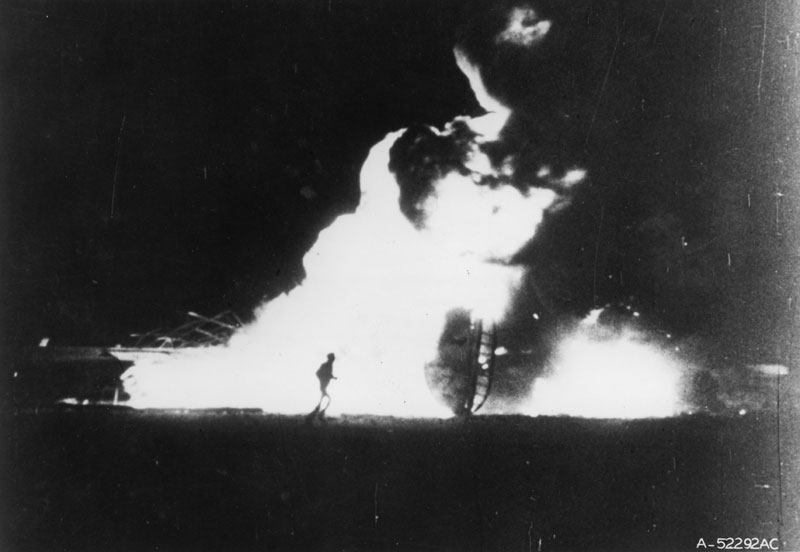 The burning wreck of a B-24 Liberator (serial number 44-40085) nicknamed "Z-Bar" of the 389th Bomb Group after crash landing at Hethel, after being damaged by British flak, 22 April 1944 Official caption on image: "A-52292 A.C." Handwritten caption on reverse: '22/4/44 B, 218. 218/RFWD225. 389BG Crash landing at base after returning from mission - all crewmen escaped.' Printed caption on reverse: 'A-52292 AC - Consolidated B-24 "Z-Bar" hit by flak over Hamm, Germany, limped home after dark in the midst of an enemy air raid. Her hydraulic system was shot out by British flak, and attempting to land at her base, which was completely blacked out, she crashed into a radar building and was consumed by fire. No crew member was hurt. Conslidated B-24 "Z-Bar" explodes into flames as all crew members get out.' (americanairmuseum.com) 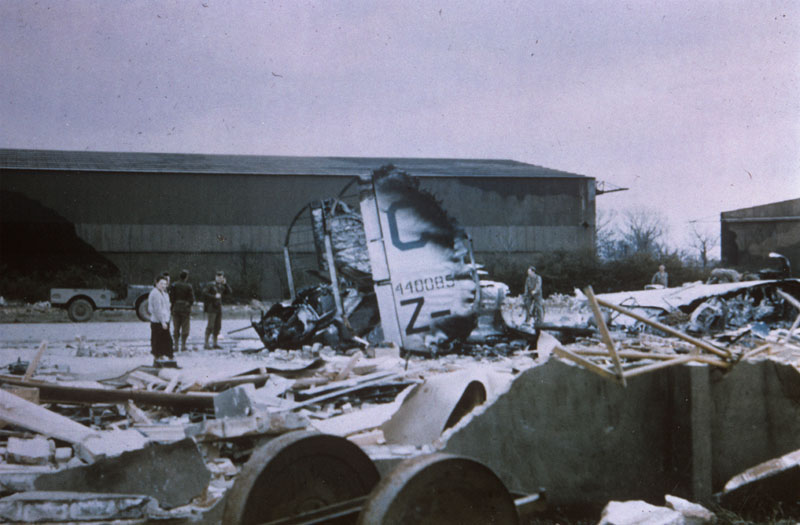 Civillians and enlisted personnel inspect the wreckage of a crashed B-24 Liberator (serial number 44-40085) of the 389th Bomb Group (americanairmuseum.com). The buildings in the background are two T2 hangars. 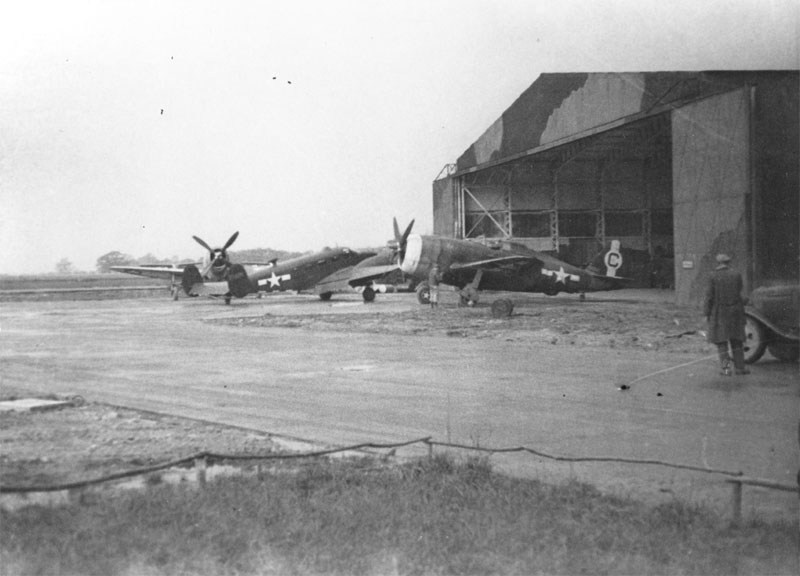 Station flight of two P-47 Thunderbolts (minus wing guns, but with the Groups 'Circle C' tail code) and a Beechcraft C-45 Expeditor used for communication purposes of the 389th Bomb Group, in front of a T-2 hangar at Hethel (americanairmuseum.com).

The group participated in the intensive air campaign against the German aircraft industry during Big Week, 20 – 25 February 1944. They also flew support and interdictory missions on several occasions, bombing gun batteries and airfields in support of the Normandy invasion in June 1944, striking enemy positions to aid the breakthrough at Saint-Lô in July 1944, hitting storage depots and communications centres during the Battle of the Bulge (December 1944 − January 1945), and dropping food, ammunition, gasoline, and other supplies to troops participating in the airborne assault across the Rhine in March 1945. 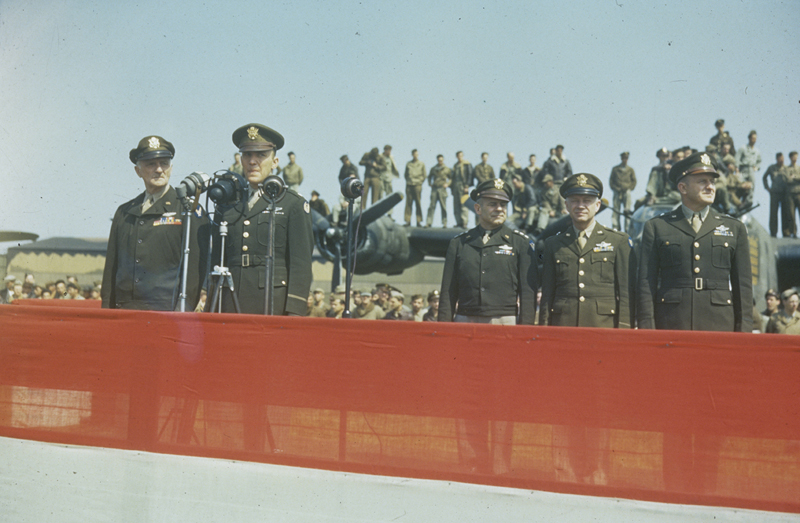 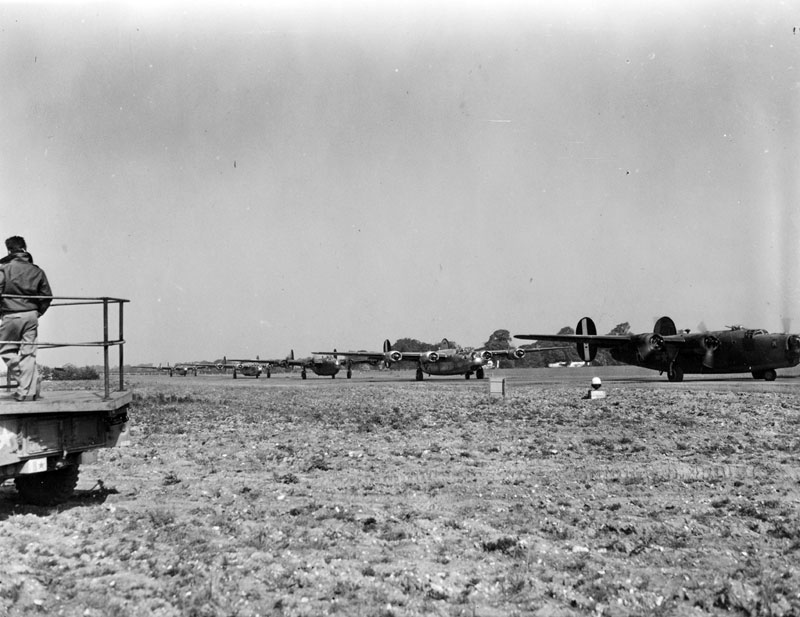 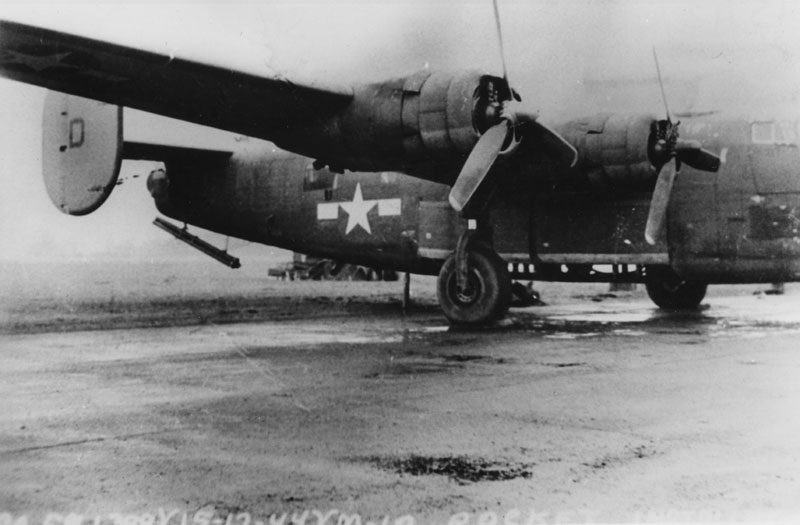 The tail of a B-24 Liberator of the 389th Bomb Group is fitted with an experimental M-10 rocket launcher to allow shorter takeoffs (americanairmuseum.com).

The 389th Bomb Group flew its last combat mission late on 25 April 1945. The last target to receive the attention of the four squadrons was Salsburg, an operation that closed the books on 321 operational missions in five different versions of B-24. In total they dropped 17,548 tons of ordnance, lost 116 aircraft as Missing in action and claimed 209 enemy aircraft shot down. In 1945 they were awarded ‘best squadron’ on efficiency.
The 389th Bomb Group returned to Charleston AAF South Carolina on 30 May 1945. On 12 June 1945, the 2nd Combat Bombardment Wing (Heavy) was redesignated 2nd Bombardment Wing (Heavy) of the 2nd Bombardment Division and relocated to RAF Alconbury.
After the departure of the Americans, RAF Hethel airfield was returned to the RAF for use by Fighter Command. Five Polish squadrons then came to Hethel. During the period March to December 1946: 302, 303, 308, 316 and 317 each stayed at the airfield, bringing with them their Spitfire XVIs / Es, Mustang IIIs, and IVs, before all being disbanded in the December 1946. In mid-1947, Hethel became a Personnel Transit Centre but was transferred to RAF Technical Training Command. However, with the reduction of the RAF, the station closed in 1948. 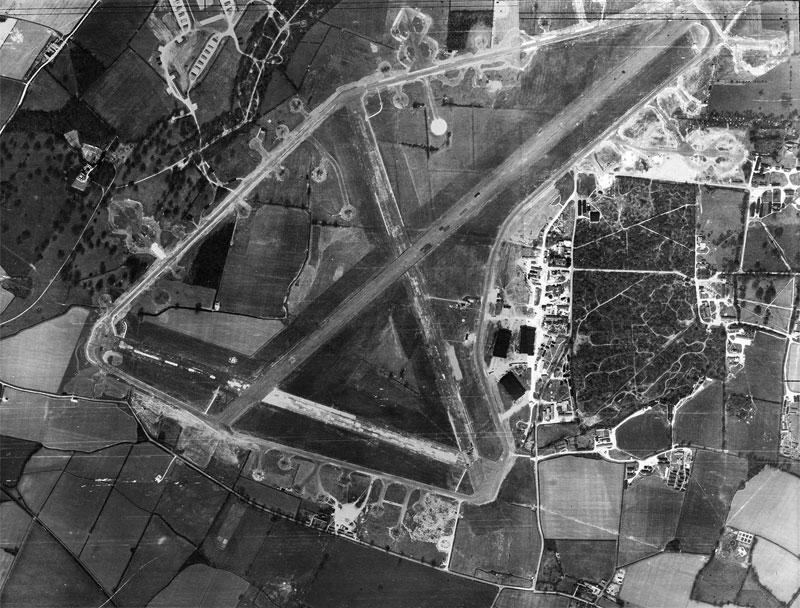 Two photos (this one and this one) were merged to form this overview of Hethel in April 1946 (RAF/IWM and RonaldV).


In June 1946 a memorial plaque was dedicated in Carleton Rode Church, in memory of 17 members of the 389th Bomb Group who were killed in a mid-air collision over the parish on 21 November 1944. A stained glass window in the church is also dedicated to the crew members killed in this collision. A Memorial Headstone is located in the Hethel Churchyard and the 389th Roll of Honor is housed inside Hethel Church.
In 1948 the Nissen hut buildings around Marsworth airfield became home to around 900 Polish Displace People. The camp was run by the National Assistance Board, For a number of years Nissen hut buildings were used to house many families awaiting the re-housing under the post-war building programme. Forehoe & Henstead R D C also used part of the area as a store depot. The Polish camp as closed in 1960/61. There are a number of Polish graves in All Saints Churchyard. For many years the airfield was inactive and abandoned until it was finally sold by the Air Ministry in 1964. 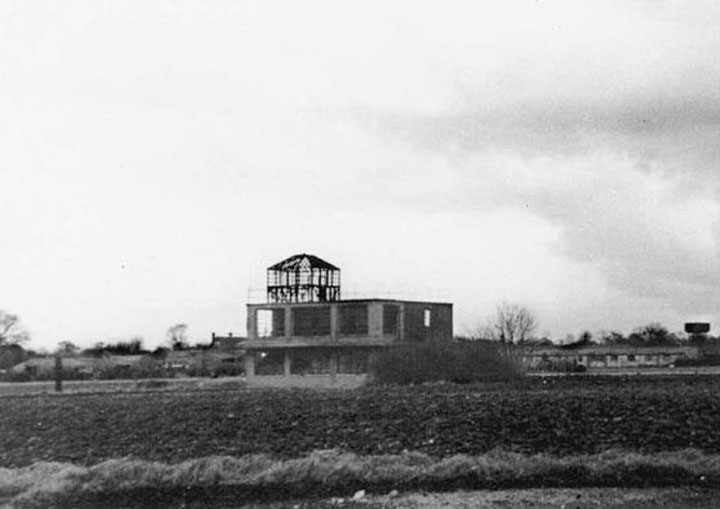 The remains of Hethel tower in the 1950s (lotuscars.com)

With the end of military control, Hethel found a new life in civilian hands becoming the manufacturing and testing site for Lotus Cars. In 1966 Lotus Cars moved into a purpose built factory on the site of the airfield and developed portions of the runways and taxiways as a test track for their cars. Lotus Cars is a British manufacturer of sports and racing cars. The company designs and builds race and production cars of light weight and high handling characteristics. The location of the factory is on the old technical site and the manufacture of vehicles, originally started in the old hangars and workshops, now takes place in several modern buildings. Lotus utilizes parts of the airfield perimeter track and lengths of the main runway as a testing track. The factory and engineering centres cover 55 acres (0.22 km2) of the former airfield, and use 2.5 miles (4.0 km) of the former runways. Much of the remaining runways have been removed and used to build roads, and returned to agricultural use. The layout can still be seen from aerial photos.
Today the company also acts as an engineering consultancy, providing engineering development within the automotive industry. The company's racing arm, Lotus Racing, and the Lotus Driving Academy are also located at Hethel. The former 2nd Air Division Headquarters at Ketteringham Hall lies just to the north of the airfield. Group Lotus use it for their headquarters. 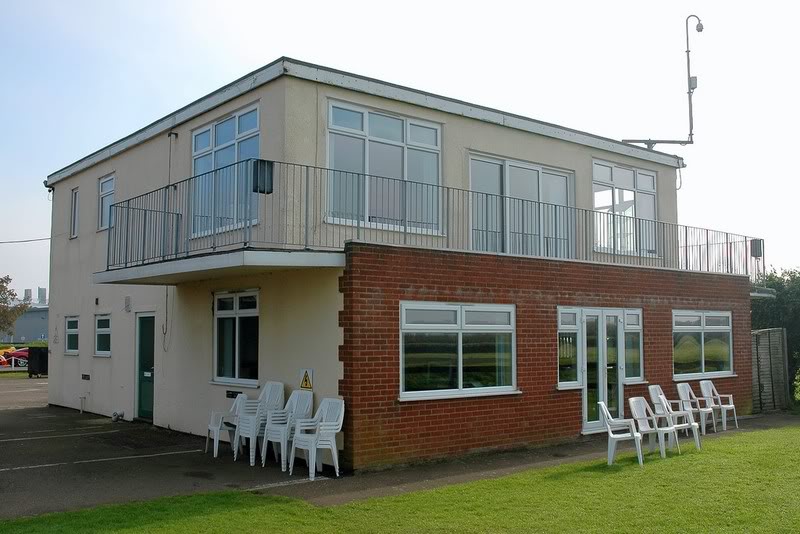 The restored and converted watch office (control tower) in 2008 (UKAirfields) 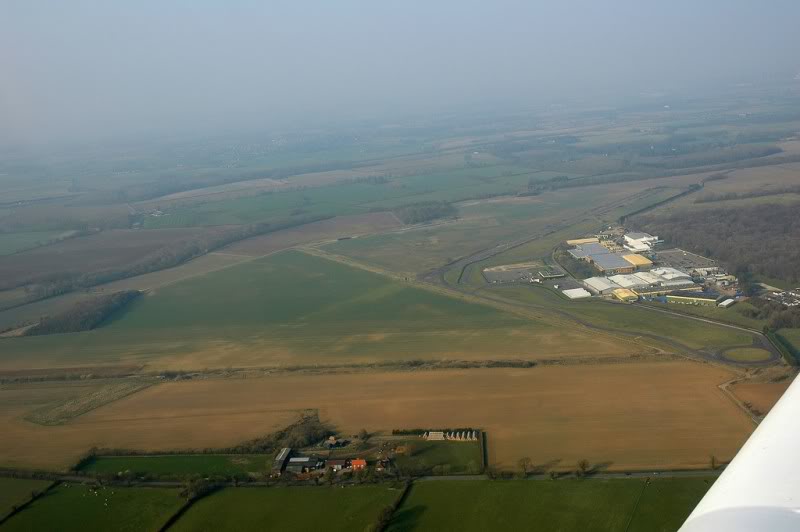 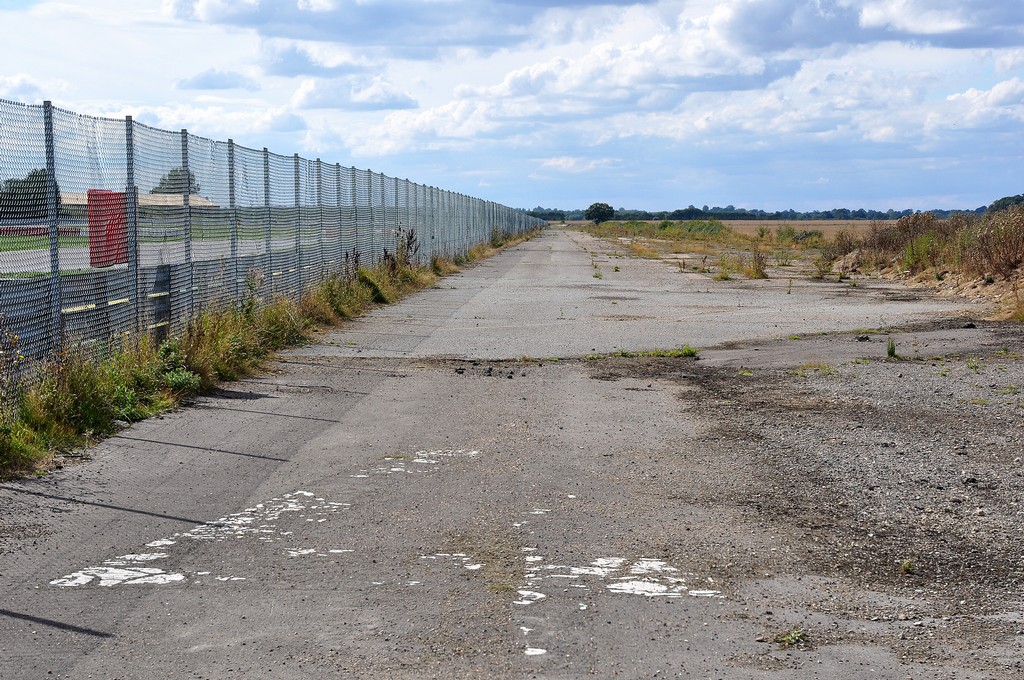 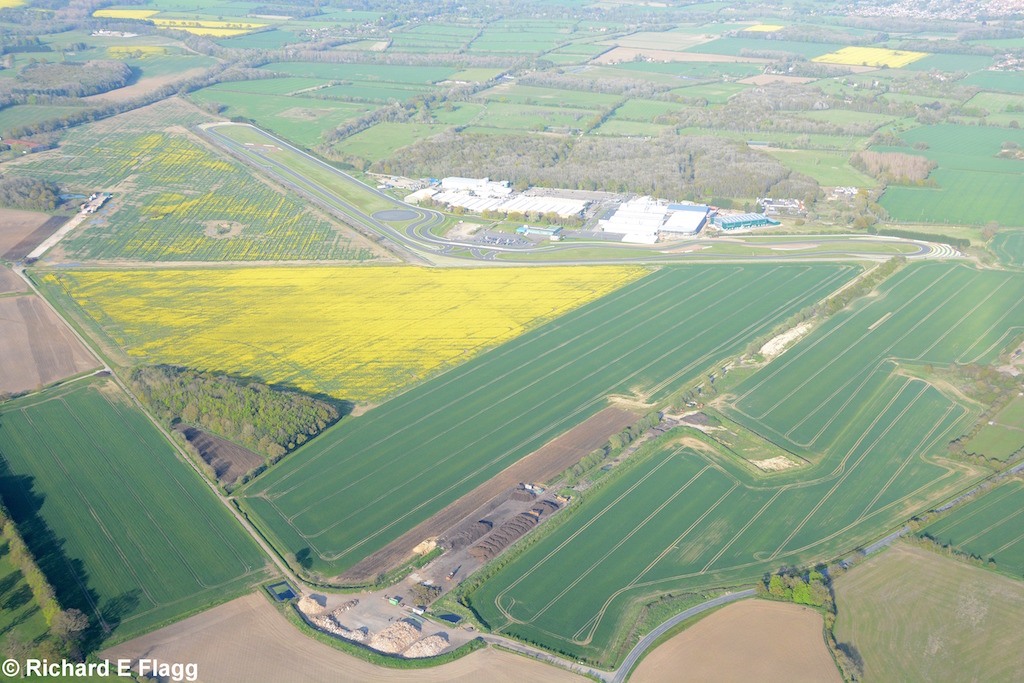 Hethel as seen from the west in 2013 (UKAirfields)

Very little remains of any buildings on the dispersed sites around Hethel Wood; the only thing of real interest being a former gymnasium which became a chapel. On the end wall of this chapel, behind where the altar formerly stood, is a crucifix painted by the American "Bud" Doyle who was assistant to the Roman Catholic chaplain, Father Beck. It was painted in early 1944 and remains in good condition. The chapel has recently undergone extensive restoration carried out by a group of volunteers with the full support of the landowner. The chapel is on private property.
contact us about this airfield