Jehonville Air base, also known as Bertrix Air Base (French: Base Aerienne Jehonville or Base Aerienne Bertrix, ICAO EBBX) is a NATO reserve air field 130 kilometers Southeast of Brussels. It was built in the 1950s at the request of NATO. To reduce the possibility of being crippled by a sudden mass aerial attack, SACEUR had developed a plan for the dispersal of his forces, to improve their ability to withstand the initial blow and to still retain a retaliatory capability. The plan, known as MC 60, was adopted by the NATO Military Committee in Apr 56. SHAPE message AG6160 PANDP, dated 11 Feb 57, gave approval for the allocation of the following four deployment airfields to 1 Air Division: Rocroi - France, St Hubert - Belgium, Stuttgart - Germany and Sandweiler (todays' Luxemburg airport) - Luxembourg. However, Bertrix, a new dispersal air field in Belgium, was later assigned to replace the German civil field at Stuttgart. The Belgium-Canada Agreement for the use of St. Hubert and Bertrix airfields was signed on 29 Aug 58.
Belgian reserve air bases such as Jehonville were built by order of NATO in the 1950s, either by upgrading existing airbases, or building completely new ones. The runways at these airfields were extended at existing bases or built specifically to NATO standards: 2400meters in length, with a preference for an emergency parallel runway (23 meter width) of the same length. NATO minimum for the back-up runway was 2000 meter. Later, between 1958 and 1961, the main runways of operational bases were lengthened to 10.000 ft class (around 3000meters) with the addition of so called overruns, but this did not happen to all reserve air bases. The runway at Jehonville was extended by only 200meters for example.
In 1958, the runway at Bertrix (Jehonville) was in usable condition, but critical items such as POL storage, ammunition storage, and communications were not completed and precluded the airfield from being used operationally. The construction progress at Bertrix would permit flying operations by 31 Dec 58, although construction would carry on during 1959. Bertrix was to be used by 422 Sqn (flying Canadair Sabres) from Grostenquin, who also provided a 16 strong security detachment. The airfield was regularly used for deployment exercises, which continued when the CF-104 Starfighter replaced the Sabres.
A year's notice of vacation of Bertrix air field was given in Jun 66, after the RCAF was forced to leave its airbases in France. Maintenance of the airfield would be ensured until the expiry of the notice period. However, the guard strength was reduced in Oct 66 from sixteen to nine. After the Canadians had left the airfield, it was turned over to the Belgian military. 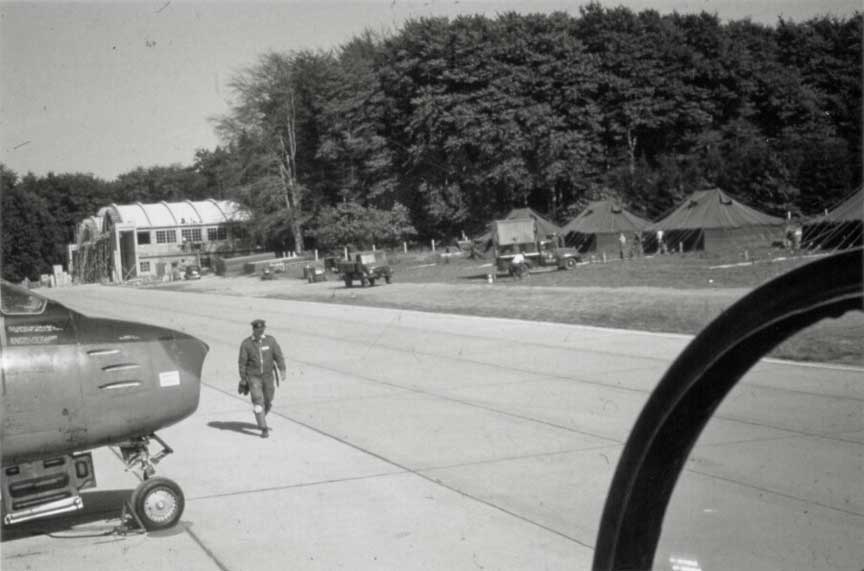 1 Air Division assigned 422 Squadron the deployment airfield at Bertrix, Belgium. Unoccupied during 1958, the airfield runway was in usable condition and construction continued during 1959. Under SACEUR's plan for the deployment of squadrons, the fields at Rocroi, France and Bertrix and St. Hubert in Belgium were used from July to October 1959 for the first time. Based on this experience, plans were formulated for regular exercise of these deployment fields. The Bertrix airfield was used by 422 (F) Squadron during emergency deployment exercises until 1963 (photo: Ray Morrison at 422 Sqn). 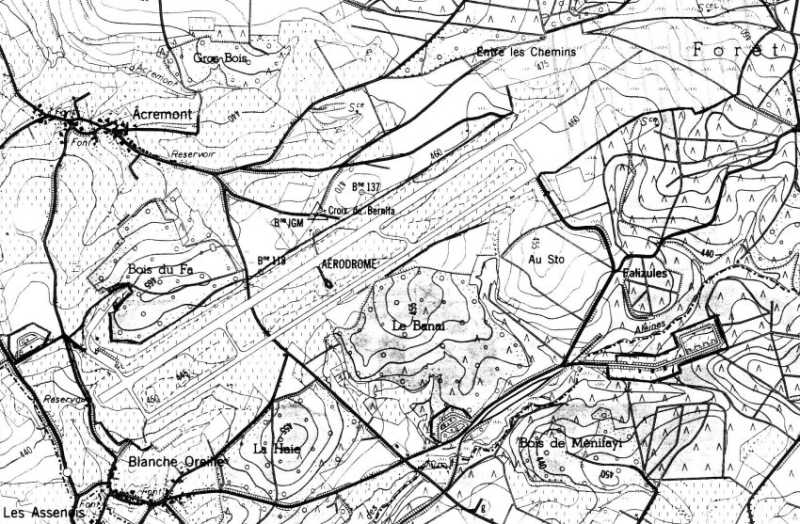 Map of Bertrix (Jehonville) in 1969, just after the Canadians had abandoned the base (image from the now defunct www.marville.org).

Jehonville does not have dispersals, but parking space is available on some platforms and on the west side two medium sized hangars can be found. It has a rather large ammunition complex, strangely located under the approach of the runway. Other buildings contain what appear to be office buildings and a radio mast (on Google Earth). The airfield is still owned by the Air Component of the Belgian Armed Forces, even though it does not have regular operations at the airfield. 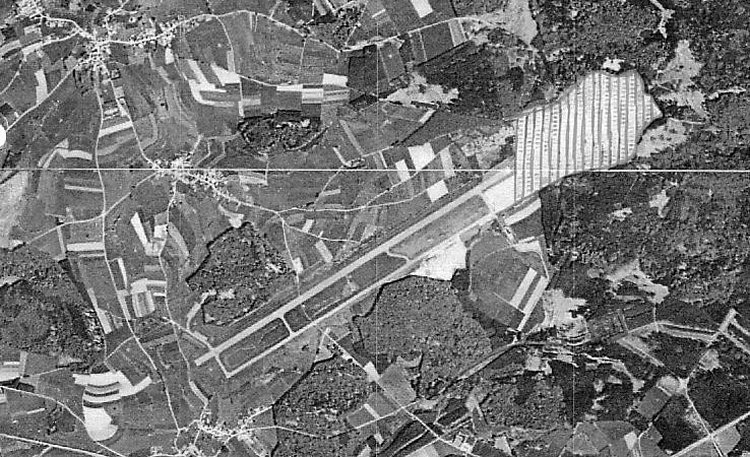 Bertrix in 1992. Judging from the white soil, the munitions complex on the northeast side of the runway was only recently completed (image from the now defunct www.marville.org). 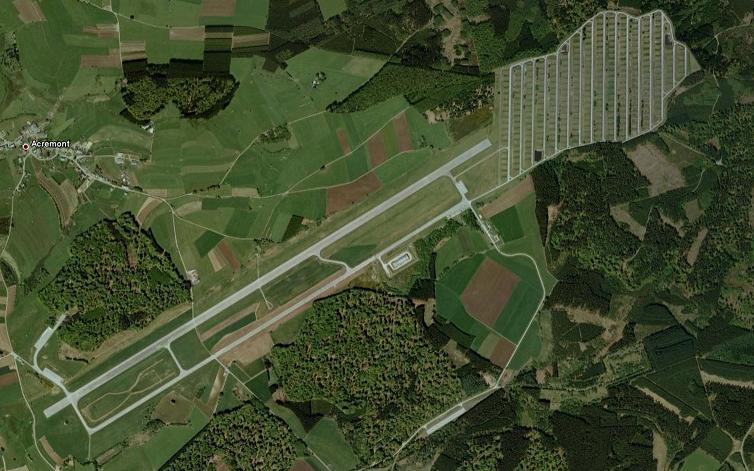 Jehonville reserve Air Base in 2009 (Google), note the large ammunition complex to the northeast and the station to the south 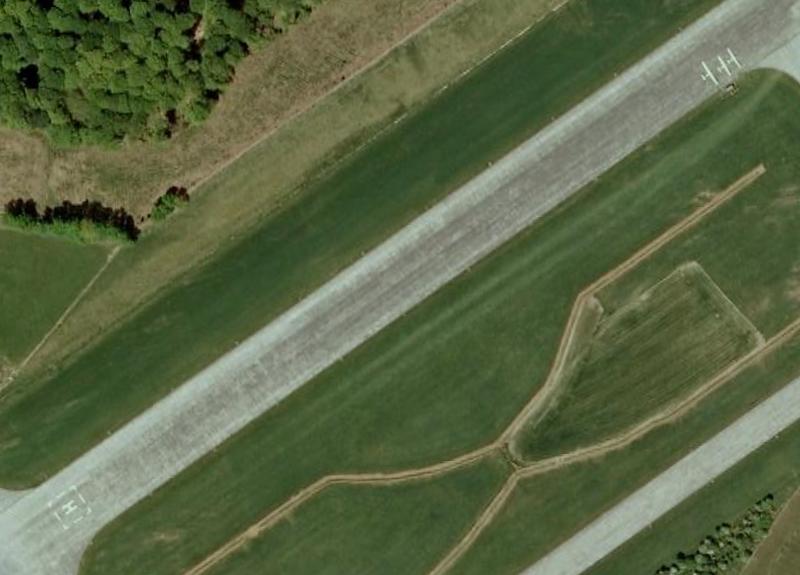 As can be seen from this picture Jehonville is also used for helicopter operations and for gliding by the Belgian Air Cadets. (Google)

Jehonville is also home to the Belgian Air Cadets. About a kilometre south of the runway, but still on the base, is a railway station with multiple tracks. It connects to the national railway system about two kilometers to the south. 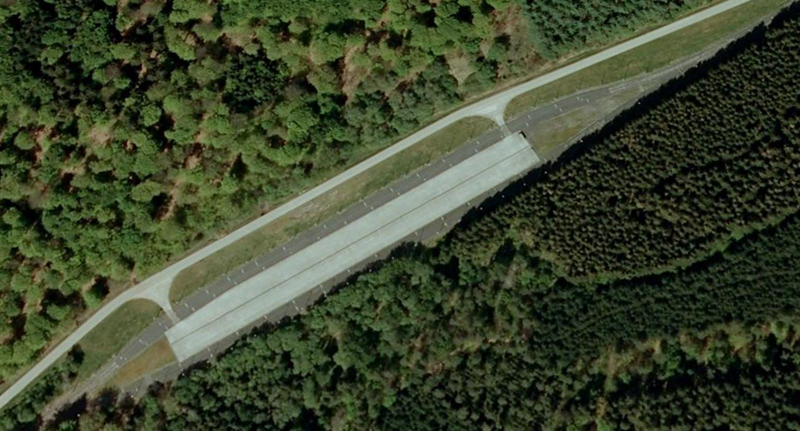 Oriented in the same direction as the runway, Jehonville also has a rather large railway station. (Google)
contact us about this airfield