Air field Kalathos (also spelled as Calado, Italian: Aeroporto di Gadurrà, Greek: Αερολιμένας Κάλαθος) was an airfield near Kalathos on the island of Rhodes.
The airfield was built in World War II by the Regia Aeronautica (Royal Italian Air Force) as airfield 806. Locating Gadurrà is not so easy, as on no map of the island its name is mentioned. The road sign that identifies the nearby (dry) river stream Gadouras was translated into Italian as Gadurrà, and this is how the airfield earned its name.
The airfield was not built like Maritsa, where hangars and other buildings were erected. Instead the crew and airfield staff were working from tents.
Only its defenses were made of concrete, mostly underground. This belies its importance, because it was one of the most important torpedo bomber airfields of the war. It was used by the Luftwaffe in May 1941 during the battle for Crete. The airfield was located only meters away from the sea front, and close to Crete and the coast of Lebanon.
Because of its importance, it was attacked by RAF Wellingtons several times, as well as by the Royal Navy. While the airfield did receive damage, it hardly hindered operations. This is why in 1942 a commando raid was executed on the airfield. Unlike a parallel similar raid against Maritza (a partial success, as the commandos managed to do damage, but were captured), the Gadurrà raid was a resounding success. In about 40 minutes 5 commandos managed to sneak down the entire 1750meter runway, passing at least 7 sentries. They sabotaged 9 aircraft (of which 7 were completely destroyed) and returned almost unnoticed to the sea.
The commandos did so by passing within 100 meter from the tents of the soldiers that were to protect the aircraft (source).

Just in case someone could have any question about the concept of "flying low" on a torpedo bomber, this picture of a Savoia Marchetti S.79 of 278 Sqn, 132° Gruppo Aerosiluranti (Torpedo Bomber Group) may solve any doubt... (photo shot by his wingman, via eaf51.org).

After the war the airfield was abandoned. Steve Robson informed me of a friend whose father served at the airfield with the South African Air Force during World War II. Immediately after the war he alledgedly repaired a former Luftwaffe FW200 back to airworthiness to fly wounded soldiers home.
Sadly, as no one was type rated on a FW200, the flights were not allowed and the aircraft was scrapped on site.
In addition to this mail, I received an email from Jon Fletcher of Scotland on 21 May 2013. He wrote:
"My grandfather was stationed there in 1945 after the German surrender.  I think he was part of "10 SPS", having transferred from 178 Squadron in Palestine.  The unit spent most of the time enjoying the island, waiting to be transferred to the Pacific or home. He remembers the airfield well.  There were 3 Fieseler Storchs and a single FW200 Condor: This (was) supposedly a mail plane, fuelled up to the brim. His unit managed to get 2 of the Storchs flying, which they used to jolly around the island in.
He recalls the Condor and it's crew, having 'captured' them (i.e. gone to pick them up, to take them into captivity) with a fresh faced Officer just out from England.  My grandfather was chosen to go as he was the 'old boy' of the unit at 25, having served in 10, 216 and 178 Squadrons; home, Africa, Palestine and Italy.  The Hauptmann (German Captain) was 'arrogant' but the crew were nice lads and good to chat to.  They all had SS Hitler Youth daggers, but alas this fresh faced and green Officer let the crew keep them (not for long, no doubt, once they were handed over to the Army).
The Condor was left to the South Africans who managed to get it running: They flew it around the airfield, before one of the engines packed in and they had to return to Kalathos: On closer inspection, the German crew had contaminated the oil with sand and the remaining engines were all damaged beyond safe use." 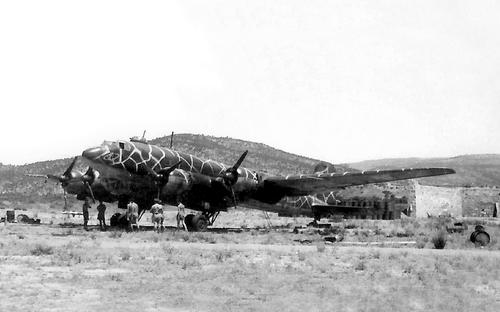 Rhodes, late Spring 1945. South African troops looking at a Luftwaffe’s FW 200 Condor captured virtually intact after the Allied conquest of this Island and the German troops surrender. The plane is likely one of the Condor employed as transport aircraft (ww2incolor.com). 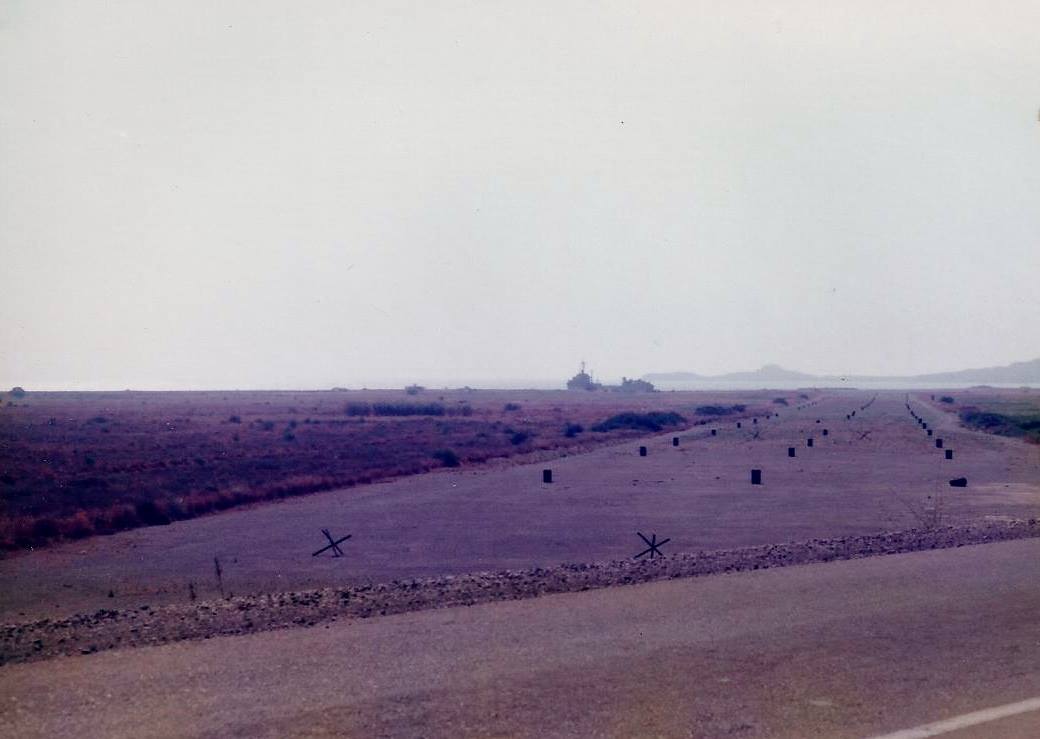 The runaway at Kalathos 1983 (photo kindly supplied by Ian Dewar)

A road was built over the northern end of the runway, burying much of what had remained of its concrete bunkers. Only the tent city has gone, and the runway is beginning to get overgrown, but on the sea side of the runway many concrete facilities still exist. Although the runway is still visible from the road, it is easily missed, as the surrounding area has been covered with olive trees. On the beach you can visit the remains of the fortifications, several pieces of barbed wire and remains of crates and barrels.
Steve Robson emailed: "I've visited Kalathos a number of times and it is clear to me that the Greek Army made quite a few changes to the original buildings. Looking around that part of the coast (...) the area was very well defended and the 88mm and 20mm mountings/ready use ammo lockers are still there."
A small bunker that served as air traffic control, with a compass rose on the ceiling, also still survives. At some time a helicopter landing pad 'H' was painted on the runway close to the beach. It was still faintly visible in aerial photography in 2005, but has since disappeared. 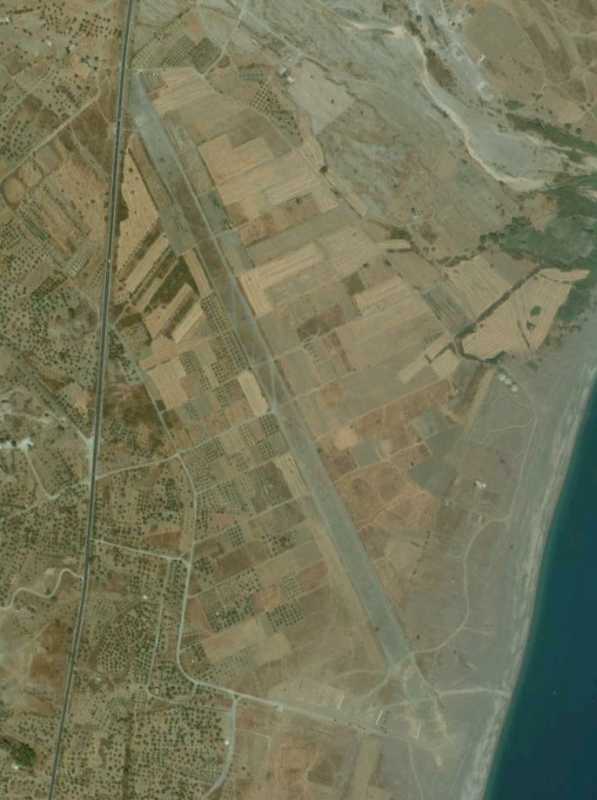 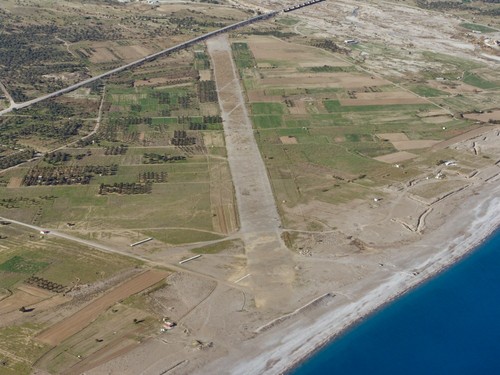 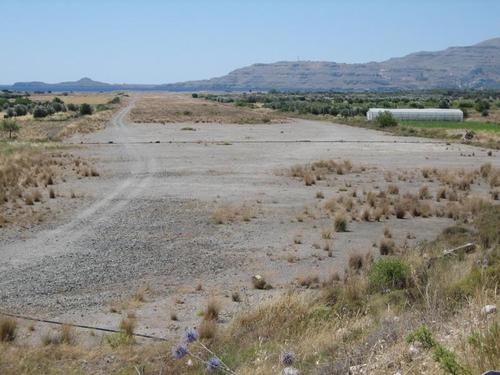 Kalathos airfield as seen from the road in 2008. 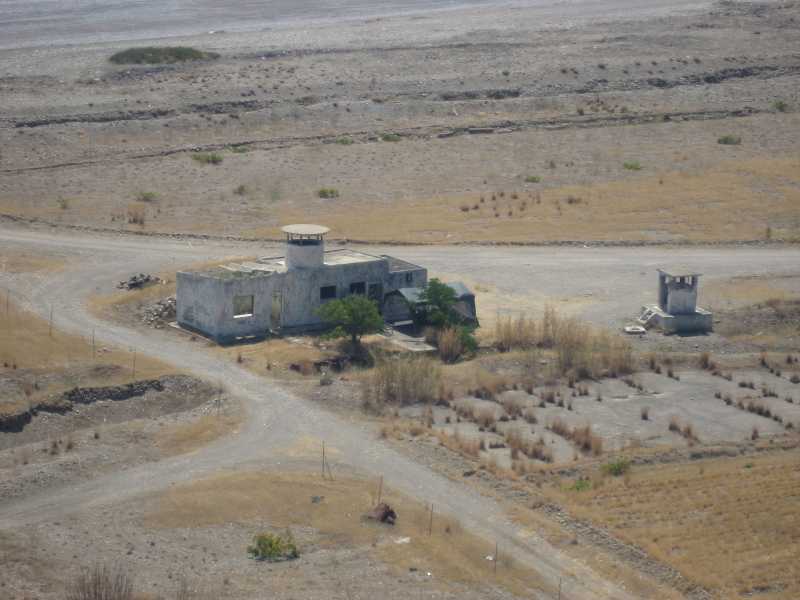 Kalathos control tower in 2009 (photo by Steve Robson, via email). 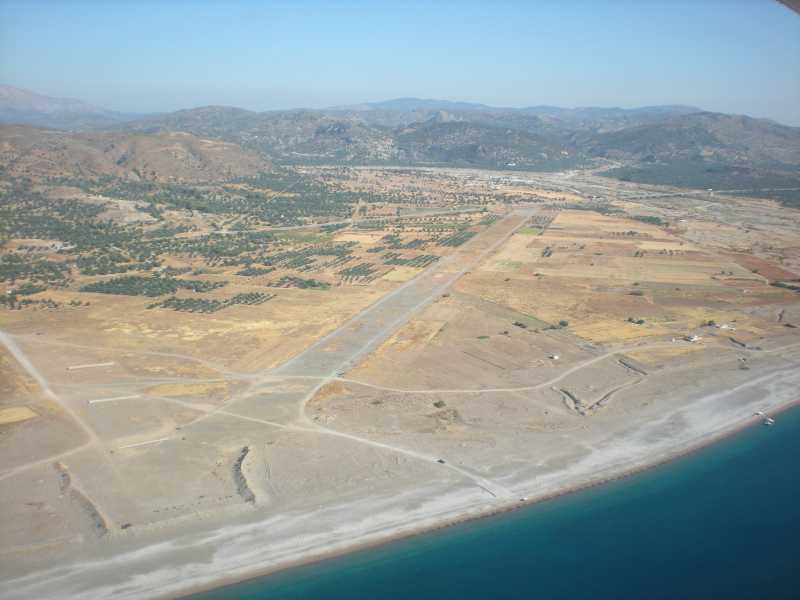 Kalathos airfield as seen from overhead the beach in 2009 (photo by Steve Robson, via email).