Einstazhafen Kaltenkirchen was an airfield a few kilometers west of Kaltenkirchen in Holstein, Germany
Construction of the airfield began by order of the Reichsminister and Supreme Commander of the Luftwaffe, issued 1 October 1935. The location was chosen because of its proximity to the Reichsstraße 4 (Todays B4 road) and the availability of the railroad at Kaltenkirchen.
The base was about the size of the current military exercise area Kaltenkirchen. After the land acquisition by the Treasury was finished construction began in 1938. Construction was done by local construction crews assisted by the Organisation Todt.

In 1940, the airport construction site employed about 1400 men. They were housed in rapidly constructed barracks in the towns of Springhirsch, Heidkaten and Moorkaten. Besides the usual airport requisites (Water, electricity, roads, drainage) the grass landing field and a provisional concrete runway (direction SSW-NNE) were built. Initially the airport initially was limited to glider flying and a few night fighters of Nachtjagdgeschwader (NJG) 1 that used the airfield to hide in late 1942. Additionally it was used as a training facility for Luftwaffe medical staff of Luftgau XI, and as a hospital. The medical training facility left the airfield in October 1942.
In April 1941 the 1. Naval Driving School (1.Marinekraftfahrausbildungsabteilung 1.M.K.A.A.) formed with the aim to teach sailors how to drive a car in 6-8 weeks. In 4 companies all classes of drivers licences (cars, trucks, buses, etc) could be earned. 1. M.K.A.A. left the airfield in September 1944.

Until the end of the war the airfield was also home to the hospital of Stalag XA, a POW camp with housed mainly russian soldiers until the summer of 1944. Although officially a hospital, POWs were forced to work at the airfield. Conditions in the camp were so bad, it was a death camp in reality as the medical care was severely insufficient considering the prisoners had to work. Death toll was high, and at least 400 men perished. Additionally there was also a smaller Italian POW camp.
To realise the planned expansion of the Einstazhafen new labourers were needed. They were found at concentration camp Neuengamme, which ran about 80 'outside camps'. The first prisoners arrived in August 1944.
The prisoners were used to expand the airfield, especially the runway. In October the runway measured 1800x85meters. Additionally two hangars were built on the southeast side and one on the southwest side. The 500 prisoners also built two hangars and an engine test stand in Kaltenkirchen. For a short period the camp grew to 1,000 men of different nationalities. The camp was moved to Wöbbeln on 16/17 April 1945 via the railway station in Kaltenkirchen.
During the existence of the outside camp between 500 and 750 people died of hunger, illness and abuse of the camp guards. The deaths were buried in the nearby forest, and the bodies that were uncovered after the war were reburied on a small cemetary in Moorkaten if their bodies could not be identified for a burial at home. 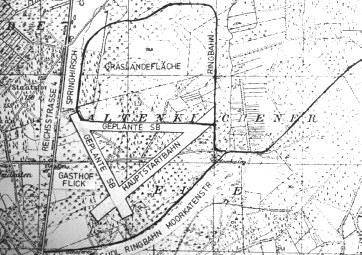 In December 1944 I.Group of JG7 brought their Me262s to Kaltenkirchen. The Group was being rebuilt, and filled with retrained pilots from Lechfeld. The first Me262 was almost immediately photographed by a reconnaissance plane of 542Sqn RAF. From now on the airfield was a known 'jet base' and under constant scrutiny of the Allied air forces. As a result the airfield got a Flak battery filled with young Hamburger "Flak aides" (german: Flakhelfern). This unit stayed at the airfield until the end of March, and was possibly responsible for shooting down a 339th Fighter Group P-51. Its pilot bailed out and was captured.
I./JG7 avoided the fight however, and proceeded with their task: training aircrew on the Me262. On 12 february they reported a total of 12 aircraft, which grew to 25 on the 18th. The aircraft were hidden away in the forests surrounding the airfield and were towed to the runway, sometimes as far as 2 kilometers. In the immediate vicinity of the airfield radar sites were erected. Training took its toll however: because of collisions, technical issues and pilot error several aircraft were lost, as well as several pilots. The worst day was on 30 March, when the group lost 4 aircraft and 3 pilots on a single day. Shortly after the unit left for Brandenburg, leaving behind some pilots to follow with Me262s that had been left behind.

In the evening of 5 April 1945 the first Arado Ar234 jet bombers arrived at Kaltenkirchen with III./KG76. These brand new bombers had already seen their first successful operations and came from Achmer and Marx. The Wing (german: Geschwader) only brought two squadrons to Kaltenkirchen: No.6 and No.8 having 25 aircraft of which only 8 operational. In spite of severe fuel shortages the unit flew for ten days between 5 April and 3 May 1945. The airfield suffered from a US aerial attack on 7 April and a week later an Ar234 was shot down during takeoff by a Hawker Tempest of 59Sqn. RAF. The number of servicable aircraft dwindled however, so 6 Staffel (squadron) handed over their aircraft to III. Group and marched off to Lübeck. In the midst of April a general appeared at the airfield, and sent off 150men of the Wing to the eastern front. The first Ar234 left for Leck on 28 April, the last ones on 3 May, and on to Stavanger in Norway from there.
The air attack of 7 April had left about 950 bomb holes on the grass landing field, and another 30 had turned the concrete runway to rubble. An unforeseen result of this action was that the prisoners in the camps were ordered to repair the airfield. Accoring to German aircrew of the day, the so-called Kapos were extremely abusive to the prisoners. Interventions by Luftwaffe personnel had little or no positive effect. On the evening of the 10th the runway was repaired to such an extent that operations could continue. Further repairs were deemed not neccesary, and the prison camps were moved to Wöbblen.
Mid-April a reconnaissance Wing flying two Staffeln (squadrons) of Me262s moved to Kaltenkirchen. Although they had only 5-6 combat ready Me262s, this was partially made up by 3 FW-190 for bad weather reconnaissance. On Wednesday 2 May they left again, for Hohn and Schleswig, leaving two aircraft behind, which were to be brought on the 4th. Because English fighters were overhead the airfield guarding it, one of the pilots initially refused to take off. He only did so at gunpoint, only to be shot down near Kiel, severely injuring him.

On 3 May 1945 the airfield was left in chaos when the last Luftwaffe soldiers left the airfield. An SS-unit shot 10 Serbian POWs, TK-mädels (underaged girls forced in the military) had been released and abandoned at the airfield and a large amount of Luftwaffehelferinnen had been left stranded at the airfield. Loose parts of Luftwaffe units, a number of Navy personnel and base security were left at the airbase.
The Arado research department had flown onto the base on 1 May in a 4 engined Arado Ar234C and an Ar234B transport (filled with wives and children). Some Ju87 of 3./Nachtslachtgruppe 8 dropped in, but left quickly. Bf109, Ju52, Ju88, Bf110 and FW190 were seen on the airfield, and many of them were blown up. Especially the large amount of FW190s present at the airfield in March was noteworthy. When on 4 May 1945 the last aircraft had left, personnel awaited the arrival of the English troops, which arrived a day later and found a "cleaned up" airfield. Personnel and villagers of hte surrounding villages had already done their 'wartime shopping' at the base.

Immediately following the war the base was used as a POW camp, temporarily housing 2000 German troops. At the airbase the English set up a car park, which at 20,000 captured vehicles must have been one of the largest in Schleswig-Holstein. This is where German POWs were put to work initially, later relieved by German service personnel. The camp sites were dissolved and refugees were housed in the buildings, a situation that lasted until the 1960s. The vehicle park was finally cleaned in 1950 and a process of reforestation began by planting 2 million trees. The runways were blown up in 1949/1950 and in 1951 a French delegation exhumed concentration camp victims for reburial. For a while the former airfield was considered (in 1968) as the new location of Hamburgs new airport, but ultimately the location became an army exercise grounds. 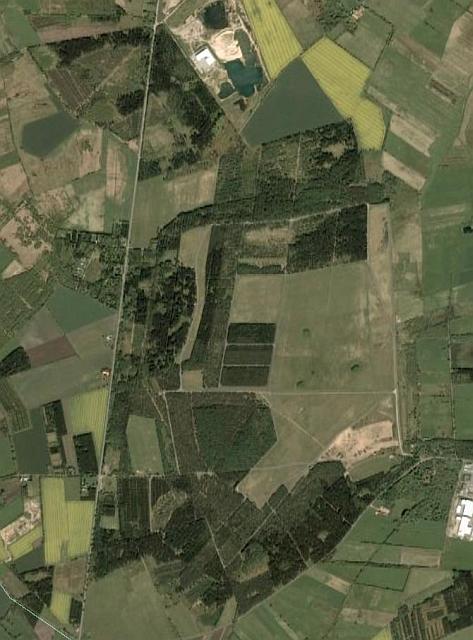 Einsatzhafen Kaltenkirchen in 2009: the runway is the only recognisable feature in the land