Airfield Keent (Dutch: vliegveld Keent, also known as airfield Grave or B-82 Grave) was an airfield southwest of Nijmegen, just across the river Meuse (or 'Maas' in Dutch).
As early as 1928 an airstrip near the community of Keent (near Overasselt and Grave, Noord-Brabant) was in use with aircraft of the Navy and Army Air Force. The use was actively promoted by the Mayor of Overasselt, a former Marine. He also managed to convince the city council it would be a good idea to hold an airshow between 15 and 19 July 1933, which indeed did take place. After the airshow the airfield was soon forgotten.
The River Meuse was canalised in 1937, cutting off Keent from the rest of the municipality, in fact putting Keent on an island.

When during 1944 Volkel Air Base was bombed, the Germans decided to press a number of reserve airstrips into service. The airstrip at Keent was one of them. From June 1944 local labourers were forced to build on the 1200m airfield. The airfield was completed in late August and alledgedly a German aircraft made a test landing and takeoff at the airfield. The Germans soon forgot about the airfield however.
After the fall of Falaise and subsequently Paris, the Germans panicked and began to flee large parts of occupied western Europe. The frontlines crumbled and by early September, the Allies were on the Belgian-Dutch border. In the Netherlands, this culminated in what is known as 'Dolle Dinsdag' (Crazy Tuesday) 5 September, when German troops could be seen fleeing, destroying everything of even the remotest military value they had to leave behind.
The airbase at Volkel, already tortured by Allied bombings, was a pile of smoking debris when the last German retreating forces left. The chaos at the German front was seen by Field-Marshall Montgomery as the ideal moment for a daring advance over the German lines. Codenamed "Marked-Garden", it saw the 1st Allied Airborne Army drop on 3 strategically important locations behind enemy lines, starting 17 September.
The U.S. 101st Airborne Division was to land near Eindhoven and capture several bridges over local canals. The U.S. 82nd Airborne Division was to land in the Nijmegen/Grave area to capture bridges over the Meuse and Waal rivers and the Meuse-Waal canal. The British 1st Airborne Division was to drop near Arnhem to capture the bridges over the Rhine and Deelen Air Base. Oddly enough, reconnaissance photos of the airfield had been taken on 12 September during the preparations of the operation, but they were ignored.

On the second day of Operation Market-Garden, the site was found by a patrol of the 504th Parachute Infantry Regiment. But, as the plan focused on the Meuse bridges at Grave and resupply by the capture of the Eindhoven, Volkel and Deelen airfields, nobody really acted on it, even though the 1st Alllied Air Army (1AAA) still had the 52nd Lowland Division ready for deployment. Instead, 1AAA had to claim the airfield from 2 Tactical Air Force who needed it for their combat planes. The RAF could not get its combat engineers to the area though, and so the airfield was temporarily assigned to 1AAA who went to the location on 21 September. After two days of working hard the airfield was complete nenough to receive aircraft, which did not come. they also did not come on the 24th. By that time, the Allied forces, especially the British in Arnhem, had major problems. Allied airfields were hampered by bad weather, while the captured airfields at Eindhoven and Volkel had not been fully cleared and repaired.
Ultimately, the first two RAF Dakotas (575 Sqn) landed at the airfield after having made a supply drop in nearby Grave. Their pilots assessed the airfield for a daring plan.

On 26 September 52 Troop Carrier Wing prepared over 200 Skytrains. In total 132 jeeps and 75 trailers, 31 motorbikes, 12 tonnes of ammunition, 30 tonnes of food and 882 soldiers were to be flown to Keent. They were covered by over 750 fighters, closing off the airspace over Belgium and the south of the Netherlands from about 200 German fighters.
When the first transport planes took off from England for a resupply run for the American airbornes in the Grave/Nijmegen area, the airfield had not even been captured by the Americans yet. Germans troops defending the area were pushed back only one or two miles when the first C-47 Skytrains landed. Still, they were firing on the cargo aircraft when they came in to land from the north. Only one aircraft sustained only minor damage, however.
At 13.50 hours the first Skytrain landed, from the north. The far side of the airfield was used to land, after which they taxied back over the centre line of the airfield. Then they were unloaded and then led to the third line for takeoff.
Offloading a C-47 normally took 3-4 hours, at Keent it often took less than 30 minutes. If possible, wounded were flown out of the Netherlands on the return leg. Exactly three hours to the minute later, 209 C-47s from 52 Troop Carrier Wing had landed, unloaded, and taken off on Keent airfield.

As eye-witness 1st Lt Joseph D. Guess recalled:
"At one time there were more than 100 C-47s on the field: 100 closely parked, defenceless sky freight wagons. The men were hurrying with the unloading knew they would be duck soup if even a half-dozen enemy planes could get close enough to strafe them. Above the field, the traffic pattern was jammed with a long orderly line of cargo planes ready to land. One dirt landing strip was cluttered with those that had landed. Another strip was jammed with aircraft ready to take-off. And all traffic directions were coming by radio from one parked C-47 on the ground. Yet there was not one moment of confusion."

All this occurred while nearby 50 German fighters were desperately trying to fight through skies of allied fighters defending the airstrip. They utterly failed however, at the loss of 32 confirmed kills, one probably shot down and eight damaged. 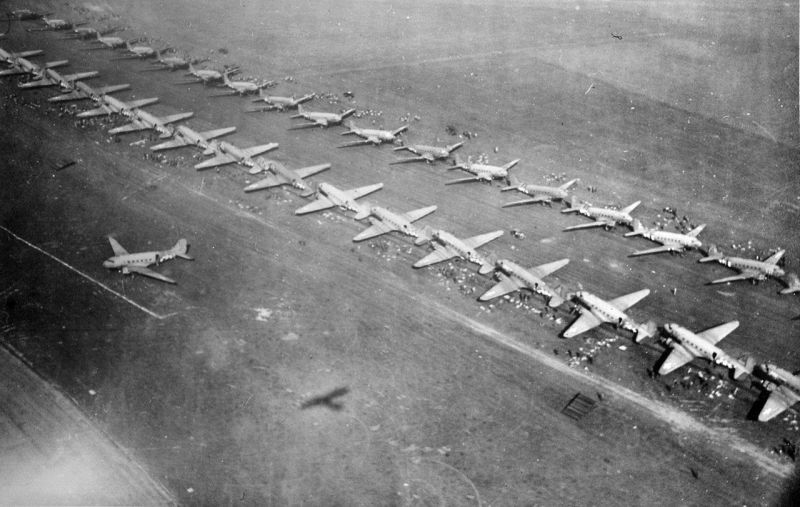 Airfield Keent (which would become B-82 Grave) filled with C-47 Skytrains.

Airfield Keent (which would become B-82 Grave) filled with C-47 Skytrains. 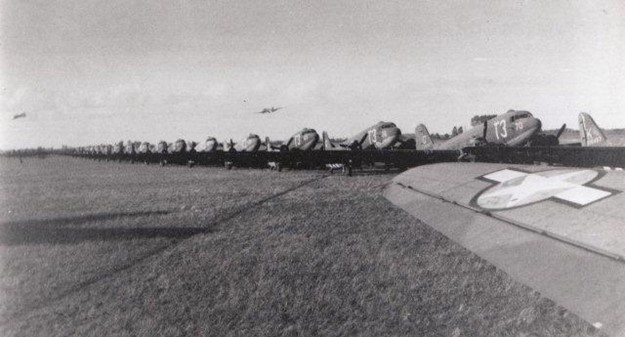 View on the ground at airfield Keent (which would later become B-82 Grave) filled with C-47 Skytrains. 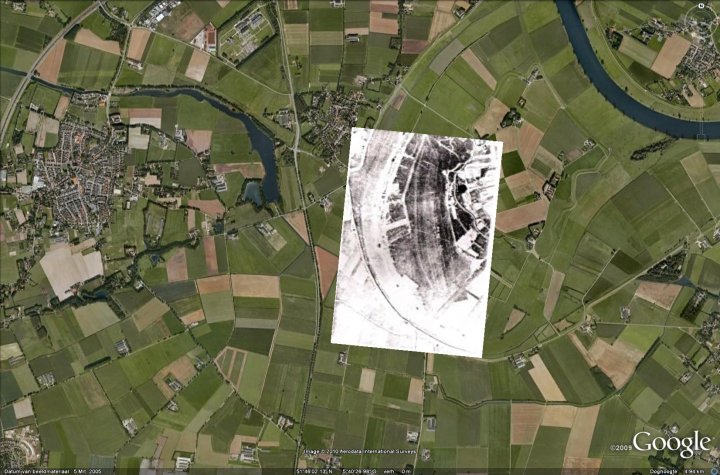 Airfield Keent (by now known as B-82 Grave) according to an Allied map. The September 1944 dropzones of the American airbornes were halfway between the airstrip and the Grave bridges on the right. 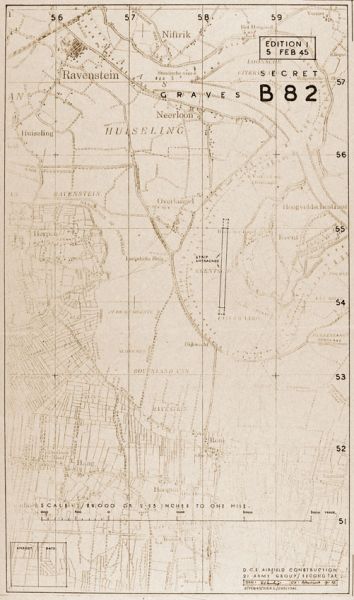 Although only a sidenote to Market Garden, Keent did write history. It was the largest aerial resupply mission to a front line in history. For a few hours, Keent's forgotten airfield became a major lifeline for battered troops. New missions were flown to Keent on 29 and 30 September, but never again on such a large scale.
A new airstrip was built by the 876th Airborne Engineer Aviation Battalion at the dropzone 'Oboe' near Grave, several hundred meters to the east of B-82. It served as a collection point for the stranded Horsas and Wacos that had been used during the Market-Garden operation. Repaired gliders were collected by 81 TCG C-47s and towed back to Denain in northern France.

After the Market Garden battles, on 28 September 1944, the Army units were ordered to hand Keent airfield to 2 Tactical Air Force. The airfield was put into service by the RAF as airfield B-82 (Grave) on 2 October 1944 and became the temporary home of 125 Wing (RAF) and 127 Wing (RCAF), with a total of 8 squadrons. 125 Wing consisted of 80 and 274 Sqn (newly converted onto the Tempest V) and 130 and 402 Sqn (Spitfire XIV). As if to remind them that they were now much closer to the frontlines, a Luftwaffe Me262 dropped bombs on the airfield that same afternoon, causing two deaths and several wounded. The two Tempest squadrons left for Volkel to join 122 Wing after only 4 days.
Their replacements (3 squadrons of Spitfires) arrived only in December in the shape of 41 Squadron, coming from B-64 (Schaffen-Diest). On the other side of the airfield 127 Wing (RCAF) was located. Their squadrons (403 'Wolf', 416 'City of Oshawa', 421 'Red Indian' and 443 'Hornet') flew Spitfire IXs. 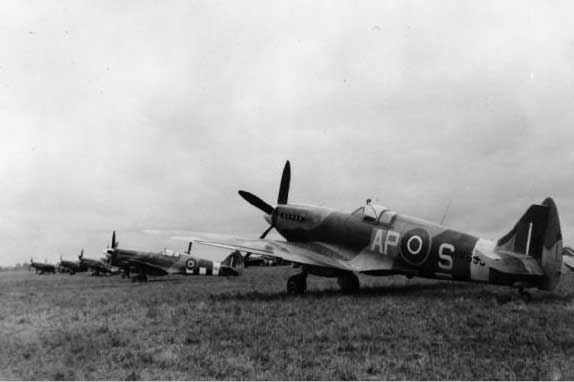 The entire Wing left Grave on 21 October. Having had "the choice between converting to Short Sunderland flying boats" (English humor: the 'Canadian' side of the airfield suffered from severe flooding) or return to Brussels, they inexplicably opted for the latter. 125 Wing left Grave for B-64 Schaffen-Diest on 29 October. Compared to Grave the conditions in Belgium were considered 'ideal'. The Keent airfield had been in a very poor condition, likely because of sabotage in the drainage system during its original construction for the Germans. The airfield was never used again. 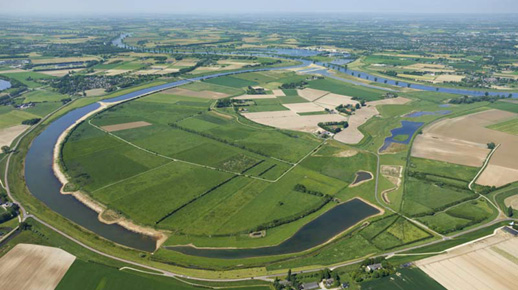 The location of the airfield in 2014, just after a major restoration project in the landscape had been completed (Aerophoto Schiphol luchtfotografie, via Brabant.nl)