Air field Kluczewo (Polish: Lotnisko w Kluczewie, Lotnisko Kluczewo, also known as Lotnisko Stargard, in German: Fliegerhorst Stargard-Klützow or Fliegerhorst Klützow, in Russian: Ключево) was a military airfield 420 kilometers west-northwest of Warsaw, Poland.
The airfield was built in 1935 by the Luftwaffe as Fliegerhorst Stargard-Klützow in what was then German territory. It was a complete air base, with hangars, barracks, a weather station and all. Fuel and ammunition storage facilities were slightly off-base, along with a firing range. As was common at the time the airfield had its own connection to the national railway grid to ease resupplying.

In 1936 the airfield was home to the tactical reconnaissance squadrons I./ and II./112. By September 1939 this had changed to the Army Reconnaissance Group 21, flying Henschel HS126. In November 1939 Blind Flying School 2 (german: Blindflugschule2) moved to the airfield, but they returned to their original airfield by the following February. July 1940 brought another Blind Flying School: number 5, flying Ju-52/3m transports. They moved to Belgrade (Yugoslavia) in August 1941, and followed up by the Heavy Transport Flying Blindflugschule 8. Blindflugschule8 left for Brest (Belorus) in February 1943 however. 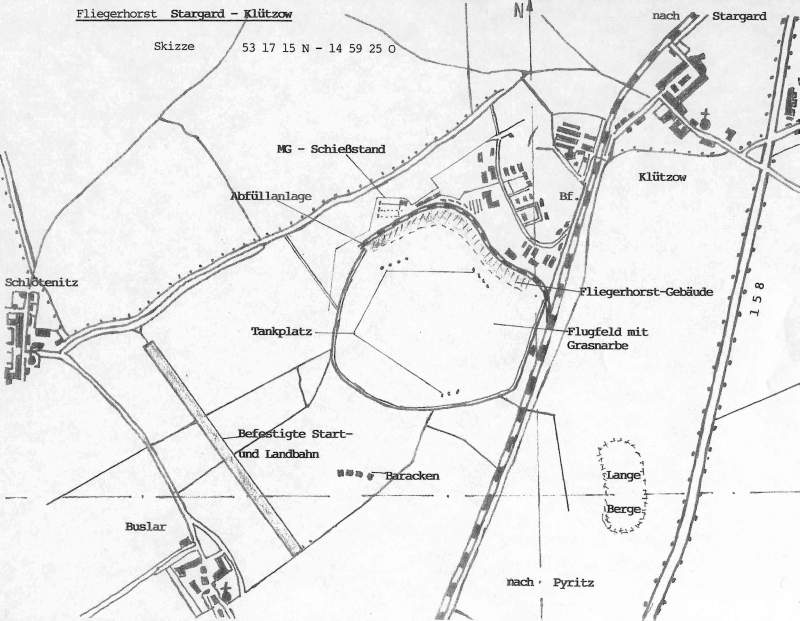 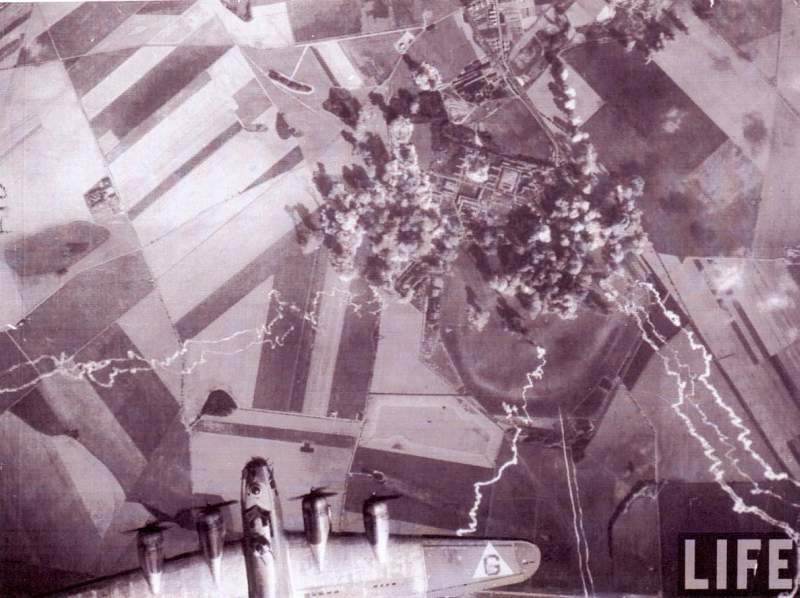 A B-17 bombing Klützow in Oktober 1944. The white cracks in the picture are markers dropped by 'pathfinders' (photo via heimatkreis-stargard.de (in german)). 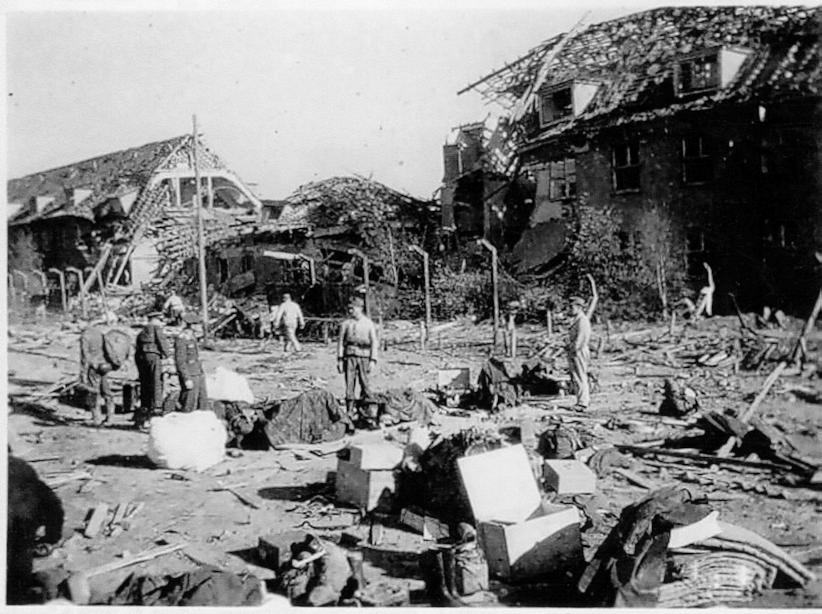 The barracks at Klützow in Oktober 1944, after a visit paid by USAAF heavy bombers (heimatkreis-stargard.de (in german)).

After the flying schools had all left the airfield became a fighter base. On 6 October the airfield was severely bombed by US Eigth Air Force heavy bombers. Aside from its oval shaped flying field it also had a reinforced runway to its southwest. It was used from November 1944 by II./JG400 flying Me163 'Komets', a rocket powered fighter. The unit did not progress beyond test flights, however. When the eastern front approached, they were quickly withdrawn to the west in December.
JG3 'Udet', flying Focke Wulf FW190 Fighters was brought to the airfield on 25 January 1945 to counter Soviet attacks on the east front. Soviet forces kept pressing for the airfield however, and JG3 left on 6 February for Prenzlau. Shortly after the entire base was abandoned with the exeption of a 12-men demolition team. The first Soviet tanks reached the airfield on 8 February 1945, but they were repelled a few times before they took the airfield.

From 1945 until 1992 the airfield was used by the Soviet air force. They expanded the air base, and built hardened aircraft shelters and a small military town to house their personnel and their families. For quite a while the airfield operated several models of MiG-21, which were replaced by 39 modern Su-27 'Flankers' (33 Su-27 fighters, 6 Su-27UB trainers) in 1988. The best known unit stationed at the airfield was the 159th 'Red Banner of Novorossiysk' Guards Fighter Aviation Regiment. The unit had been stationed at the airfield since 12 August 1964. Their final Flankers were withdrawn on 10 July 1992. After the last Russians left on 7 October 1992, the base was abandoned and it has since fallen into ruins. Ca. 1990 photo of Su-27s of the Kluczewo 88th IAP - 159th Guards Red Banner of Novorossiysk, Order of the Red Banner Order of Suvorov Fighter Regiment near the old MiG-21 shelters at the parking area (source). Russian Air Force Sukhoi Su-27 (Su-27S) at Stargard (Poland). "Red 02", a Flanker of the 159th Interceptor Wing taxiing for its return to Russia on 2 July 1992 (photo Rob Schleiffert, via Wikipedia)

In 1993 the airfield and its facilities were incorporated into the city limits of Stargard Szczeciski. Since, the runway was used for auto shows from time to time. In 2007 Bridgestone began building a large tire factory at the airfield. All military buildings are planned to be demolished, but the runway will remain for possible future use.
That same year Polish researchers from the Institute of Environmental Engineering at the Czstochowa University of Technology undertook trials of bacteria-based bioaugmentation and biostimulation. Their aim was to biologially degrade oil hydrocarbons (for instance jet fuel and lubricants), thus reducing soil contamination of the site. Soil contamination is a common problem on many former Soviet millitary installations throughout eastern Europe.
Another investor at the former air base is Finnish Cargotec, who have set up a 40 hectares business on the northern end of the runway. 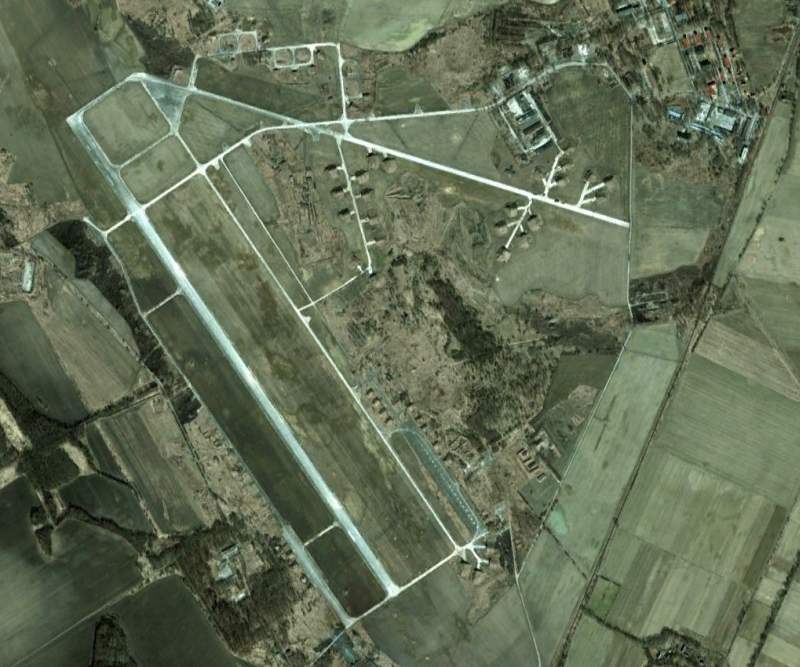 Overview of Kluczewo airfield in the spring of 2003, a little over 10 years after the Russians had left (Google Earth). 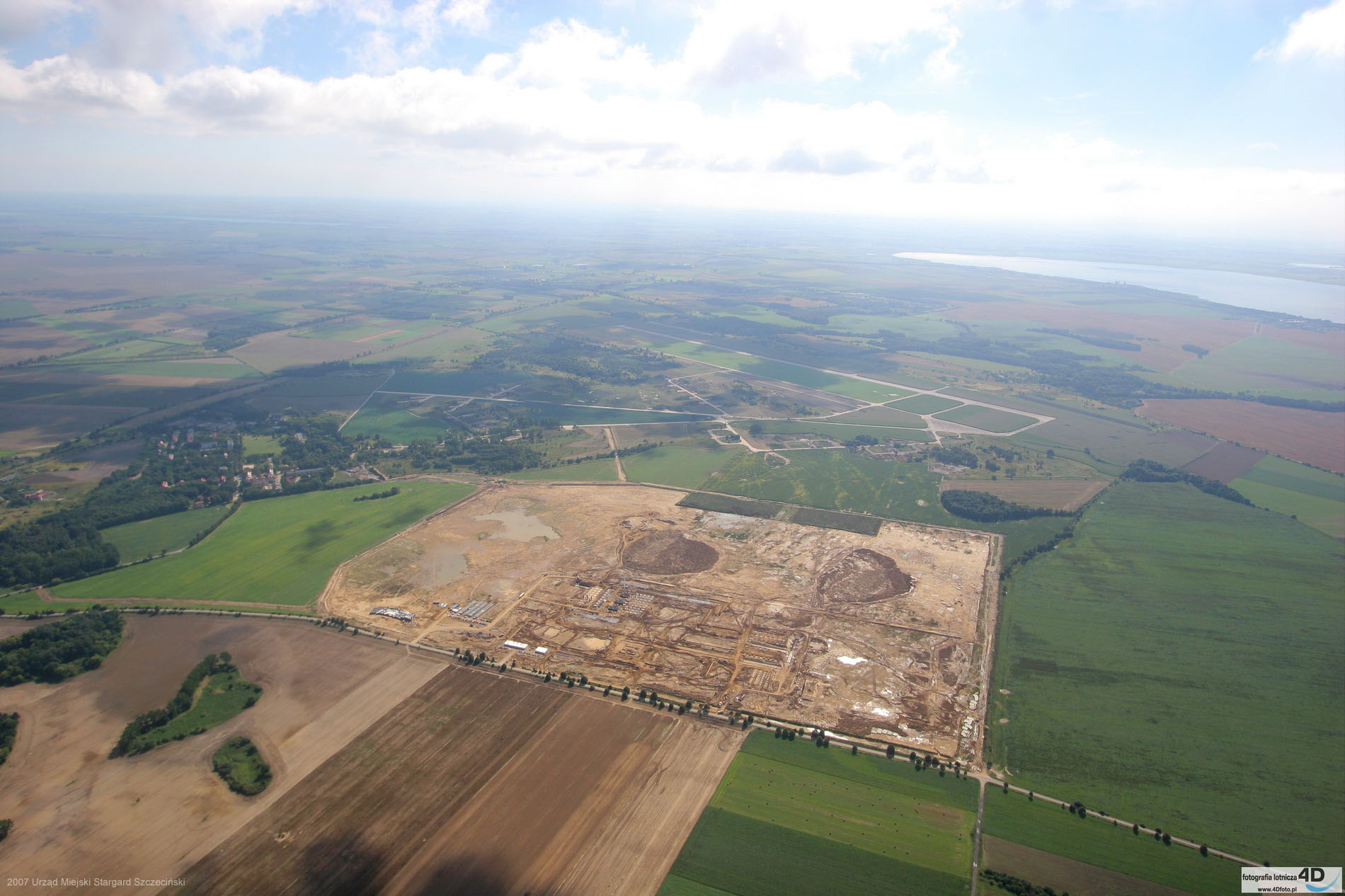 The airfield in 2007, just after construction of the Bridgestone tire factory had begun (stargard.pl).

2009 photo, showing construction work going on right next to the runway (Panoramio).

2009 photo of the Kluczewo hardened aircraft shelters on the dispersal area (Panoramio).