Kunmadaras air base (Hungarian: Légierő reptér Kunmadraras, Russian: Кунмадараш авиабазы or Аеродром Кунмадарас, ICAO: LHKM) was an airfield 130 kilometers east of Budapest.
The airfield was built by the Germans in 1944 and after the Red Army liberated Hungary, they took over the airfield, but it was abandoned when the war ended. It began seeing use by the Soviet Air Force from 1956. Under Soviet management, the airfield was known under it's callsign "FOXTROTT" (ФОКСТРОТ). It became the largest Soviet airfield in Hungary. To the north was a nuclear bomb storage site. It is unclear since when it existed and how many bombs were stored here. However the Su-7 entered service at Kunmadaras in 1961 and during a joint Russian-Hungarian military excersise in 1965, nuclear bombs proved to be assigned for the Kunmadaras and the Debrecen squadrons. It had no fewer than 64 Hardened Aircraft Shelters for fighter-bombers that could reach and bomb Rome. It housed two complete regiments (wings): a reconnaissance regiment with Su-17M-4, Su-17UM-3 and Su-24MR, and a fighter-bomber regiment with MiG-27 and MiG-23. In 1968 Kunmadaras housed only the 1. Fighter-Bomber Regiment, which had 31 Su 7B/BM's and 13 MiG 21R's at its disposal. The unit participated in the crushing of the uprising in Czechoslovakia.
In 1974 the pilots within the 1.Fighter-Bomber Regiment had a great quarrel. Tensions rose so high, they led to a split-up and the formation of a new unit, the 328. Independent Reconnaissance Regiment, in 1977.
The regiment's full name was the 1. Red Guards - twice Red Flag Guards Fighter-Bomber Aviation Regiment, member of the Kutuzov-order, or simply 1. Guards Fighter-Bomber Regiment (1. GvAPIB) for short. At the end of the 1980s, this regiment operated three squadrons:
1 squadron: 9 MiG 27D/K, 3 MiG 23UB (blue codes in the 1-20 block)
2 squadron: 10 MiG 27D/K, 3 MiG 23UB (blue codes in the 21-34 block)
3 squadron: 13 MiG 27D/K, 3 MiG 23UB (yellow codes in the 40-58 block)
In September 1977, the 328th independent Guards Vislenskiy orders of Suvorov and Bogdan Khmelnitskiy Reconnaissance Aviation Regiment (328-й отдельный гвардейский разведывательный Висленский орденов Суворова и Богдана Хмельницкого авиационный полк) was formed at the base. It operated two units, each with their own aircraft types:
Yak-28R reconnaissance 'Brewer', from 1977-1989 [1st Sqn]
MiG-21R reconnaissance 'Fishbed', from 1977-1985 [2nd Sqn]
Su-24MR reconnaissance 'Fencer', from 1988-1991 [1st Sqn]
Su-17M4R reconnaissance 'Fitter', from March 1984-1991 [2nd Sqn]
Additionally there were some Mi-8's for SAR duties and some Mi-6K's. Most likely these helicopters were detachments of the 396th Helicopter Regiment at Kalocsa. The base was regularly visited by An-22's and Il-76/78's to bring supplies and the Su 24MR's practised air refuelling with the Il 78's. The 1.GvAPIB also used 4 peace-time dirt-airstrip for training and 11 others were intended for wartime use only. Sometimes they flew from absolutely unprepared wheat-fields after harvesting. 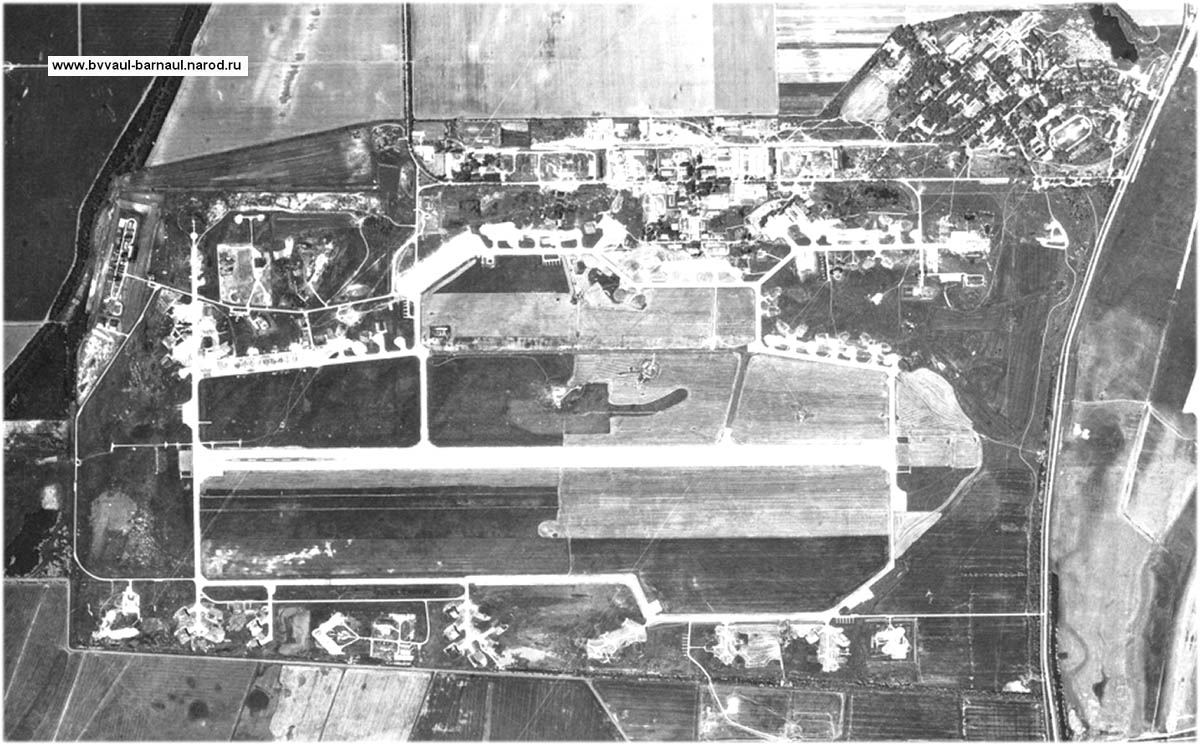 The airfield in 1977 (Alexander Zhibrov) 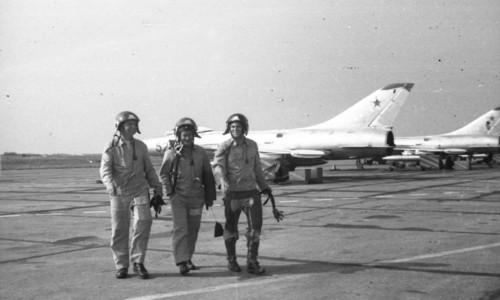 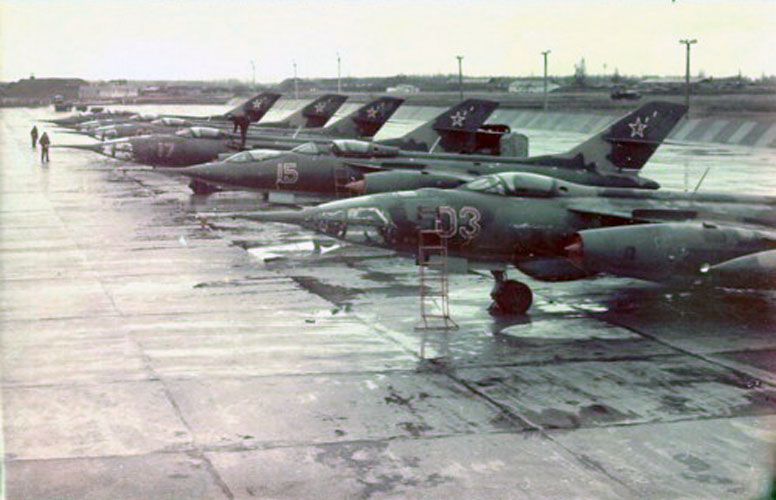 In its heyday, the mid-80s, the base had about 16,000 (!) inhabitants (for comparison: that is 3 times the current population of the town the airbase was named after). This number is made up of several components: not only aviators, but also support units, Red Army soldiers and their family members.

The Soviets were withdrawn to their home land in April 1991. Within a week all flying units left the air base, which was then handed over to the Hungarian government. It appears that Hungary did not know what to do with the largest base in the country, because they left it to the elements. Even today, the base is largely unused, only the runway sees use for motorsports events (eg drag racing). 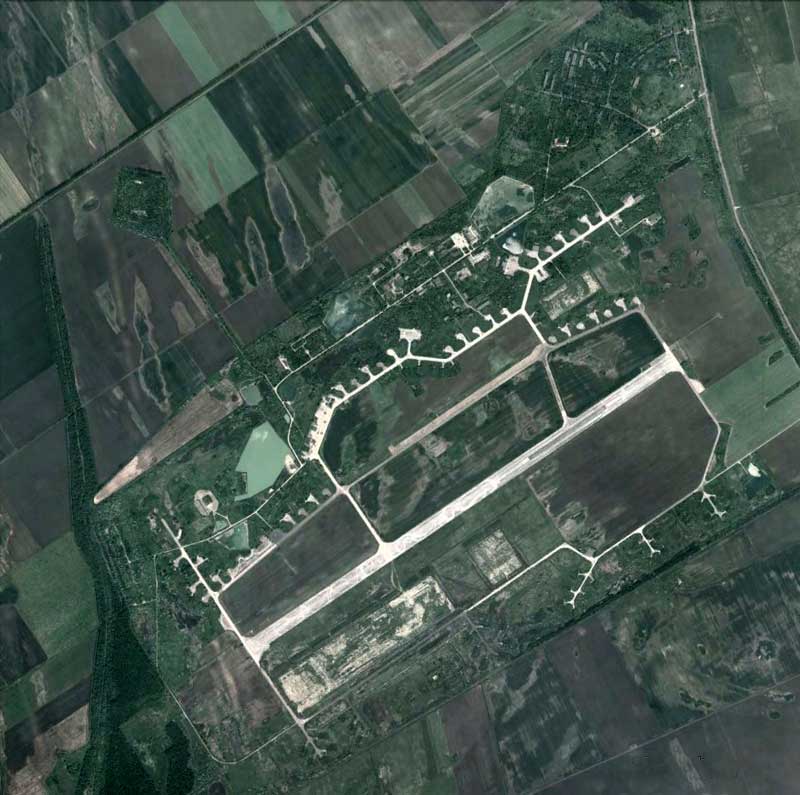 A lot of this information on Kunmadaras airfield was found on Russian websites that made unauthorised use of original research by Karesz (Károly) Vándor. Karesz has published on several airfields, one of his books (Soviet Air Force in Hungary and Austria) was even published in English. Karesz was kind enough to allow me the continued use of his research on this site. Click on the images below to go to his publisher and museum website for more information. 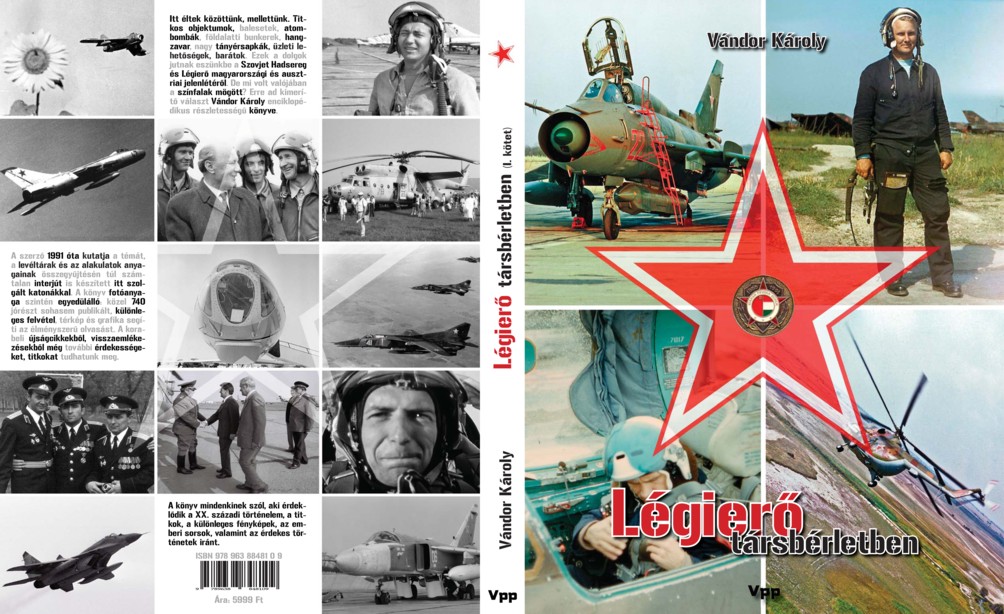