50°13'05"N 003°32'28"E
runway: flying field - grass
Air field Le Quesnoy-Vertain (also known as Escarmain/Vertain) was an airfield 175 kilometers north-norteast of Paris in France.
The airfield was built from December 1937 on 99 hectares of land. Just before the outbreak of World War II the airfield was expanded with another 16 hectares. The extra land was used to set up protective trenches, machine gun positions and aircraft shelters.
Armee de l'Air (French Air Force) units active at the field were:
GAO 505 (Air Observation Group) from 8 Oct 1939 until 16 May 1940, flying Potez 61.
GAO II/551 and GAO IV/551 with Potez 63.
GAO I/506 with Potez 63.
GC II/6 (Groupe the Chasse/Fighter Group) from 15-17May 1940 with MS406.
At the declaration of war the first aircraft to use the airfield were Potez 39. They were soon followed by more modern Potez63 light bombers and Morane Saulnier MS406 fighters. By mid-April the airfield could boast to have 36 MS406 fighters on strength.
Between 12:00 and 12:30 on 16 may 1940 the French defenses were surprised by a lot of Do-17Z buzzing the airfield. Dropping their bombs they destroyed many fighters or made them unusuable by fire or bulletholes. Polish Warrant Officer Jozef Zak was the single casualty of the air raid. Witnesses reported about 26 MS406 and Potez63 being destroyed at the field before the Germans captured the air base. Their wreckage remained on the ground until removed by the occupying forces in September 1940.
The terrain was use by I./JG77 of the Luftwaffe between 20 and 22 May as a field campaign airfield. By stationing the unit close to the front, the Germans were able to keep supporting the advancing troops during the Westfeldzug (campaign in the West). The airfield was quickly rebuilt with hardening of tracks and the construction of splitterboxes with sandbags. A branch of a nerby railway was built to bring supplies, fuel and ammuniton. In June 1940 II/KG76 brought Do-17Z medium bombers to the field.
After the summer the activities at the airfield were few, with only an occasional Ju-52/3m visiting the field until 1943. In March 1944 the airfield was rendered unusable by trenched dug across the airfield by forced labour from neighbouring towns. Later in 1944 two P-38s strafed its water tower. This attack deprived water from the neighbouring communities, who also made use of it. A few months after the airfield was liberated a B-17 made an emergency belly landing at the airfield. The wreckage remained on the site for several weeks.
In February 1946 the airfield was declared closed to public air traffic because of the poor condition of the field. The lands were subsequently returned to their pre-war owners and recultivated. Only a few concrete taxi tracks remain, including two 400m stretches that resemble crossed runways. 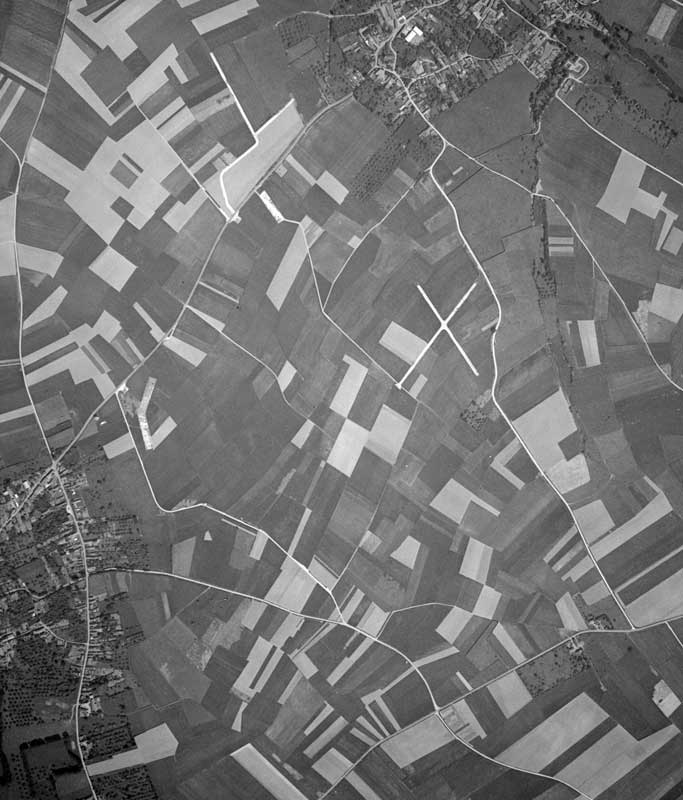 The remains of the airfield in May 1953 included concrete taxi tracks and a boomerang shaped platform (IGN.fr) 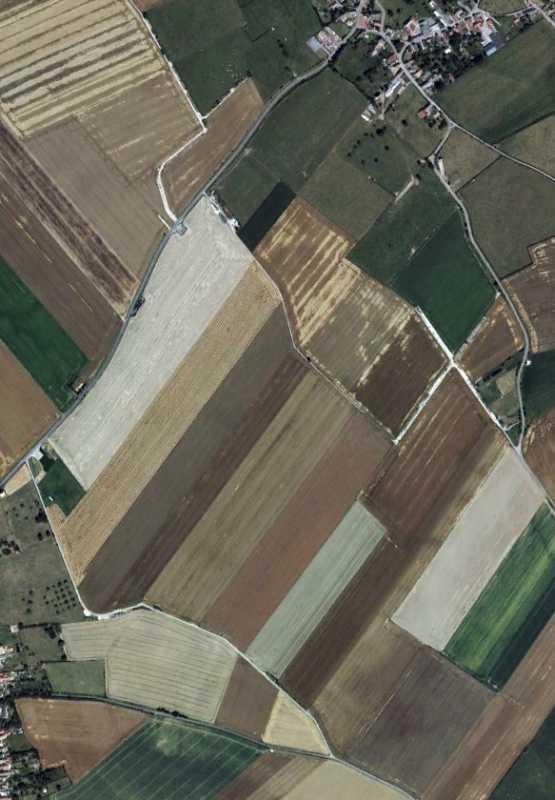