Initial construction work began late 1937 and continued into 1942/43. The first machine to use these facilities was the Laté 521 F-NORD on 8 August 1938. The first foreign aircraft to visit was a Boeing 314 Yankee Clipper in April 1939, followed by a Catalina of American Export Airlines in July 3. Imperial Airways Short C-class flying boats began to arrive at Les Hourtiquets for a scheduled stop. Air France began experimental transatlantic flights with the Laté 521 and 522 (F-NORD and F-ARAP). A first non-stop flight was successful on July 14 1939 when F-NORD flew from New York to Biscarrosse in slightly over 33 hours of flight.
The base was transferred to the Aronavale (navy) in June 1939, at the beginning of conflict. Their flying boat base Les Hourtiquets was built 2 kilometers to the southwest on the shore of the Lac de Biscarrosse. The Hourtiquets base was used by Air France as a departure and arrival base for its transatlantic flights with the big Latécoère flying boats and as a maintenance base. The Latécoère company never operated from the Hourtiquets base, apart from some maintenance work on 631s already in Air France service.  It was evacuated on 24 June 1940, just before the arrival of the Germans. However civilian flights continued in this period (Air France Transat and Imperial Airways). 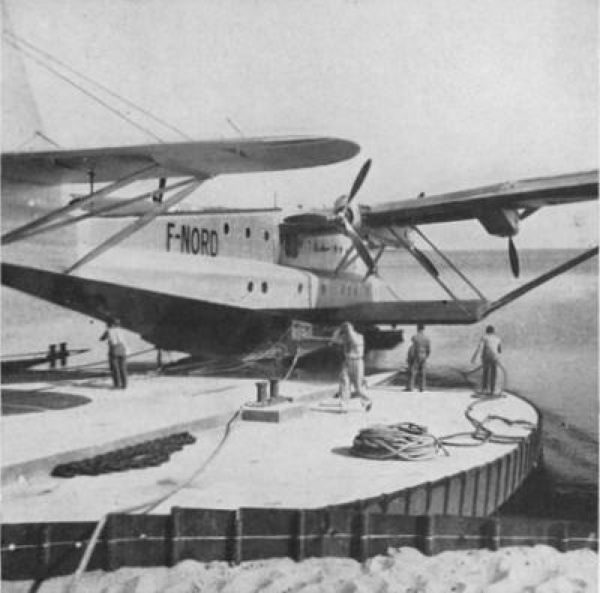 During WWII the base and the factory were taken over by the German occupying forces. Under the German occupation, BV 238, BV 222, Do 24, Do18, Arado 196, and captured Breguet Bizerte aircraft were based here. The base was regularly overflown by the RAF from May to June 1943, and then attacked on two occasions in June 1943 (destruction of BV 138 and 3 BV 222). After the departure of the last aircraft on 19 August 1944, the base was permanently evacuated on the 23rd. However most of the installations were destroyed by demolition prior to departure (North and South metal hangars, central concrete hangar and the hotel). Unserviceable aircraft and boats were sunk.

In late 1945, reconstruction work began on the base with a view to returning it to service for Air France (a Sikorsky S43 of the Aéromaritime and 3 Catalinas were being prepared in the AF workshops).
From 1945, Laté 631 trials began at the Latécoère base Biscarrosse, only 2 kilometers northeast of Hourtiquets. Air France inaugurated their West Indies line (Paris, Biscarrosse, Port Etienne, Fort de France) on 5 July 1947, first with Laté 631 F-BANU, then F -BANT and F-BDRC. The service stopped abruptly with the disappearance at sea of F- MBDR on 1 August 1948. As a result of the disappearance, a new series of developmental testing and development of the 631 was conducted. These machines were planned to be used in Africa to transport cargo by the SEMAF and France Hydro. Ultimately, only Laté 631 F-BDRE was to be put into service, returning to Biscarrosse only for maintenance. At the same time, BOAC's Short Sandringhams always travelled through Biscarrosse.


US newsreel film of a Laté 631 at Les Hourtiquets

Air France's Laté 631 F-BDRC at the Les Hourtiquets/Biscarosse pier shortly before her disappearance on 31 July 1948. F-BDRC was lost with 40 passengers and12 crew. Only some burned debris was found, suggesting the aircraft had exploded in mid-air (aviatechno.net). 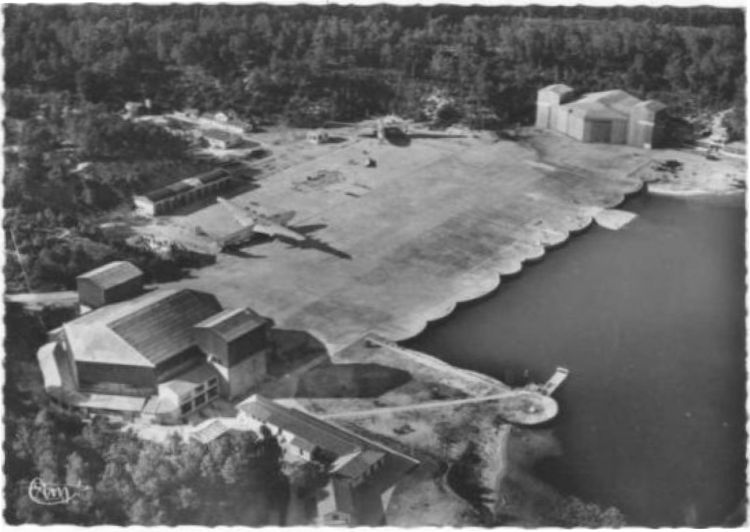 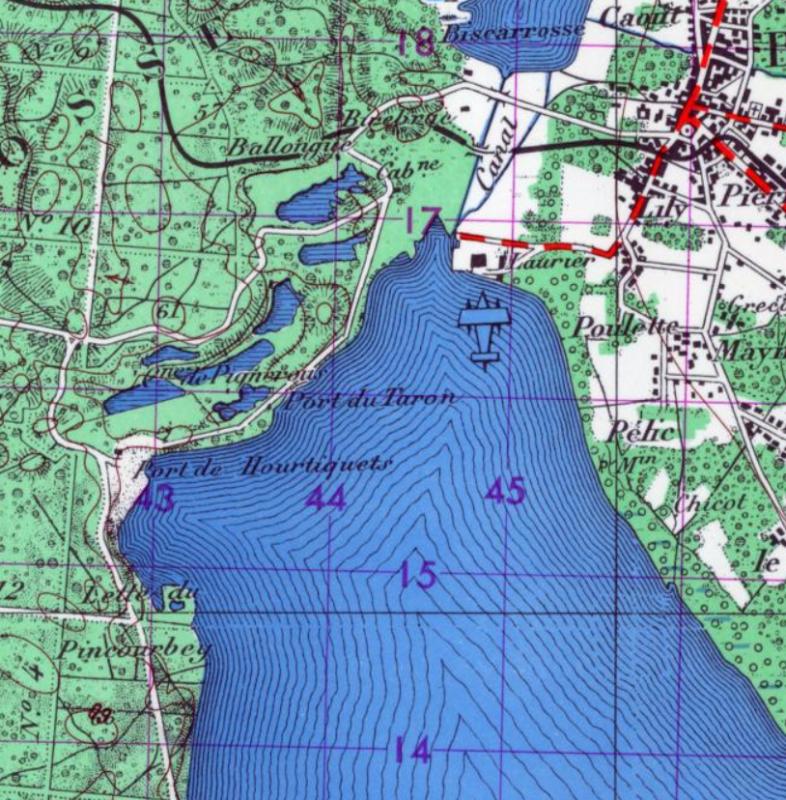 Enlargement of the map shown above (IGN) 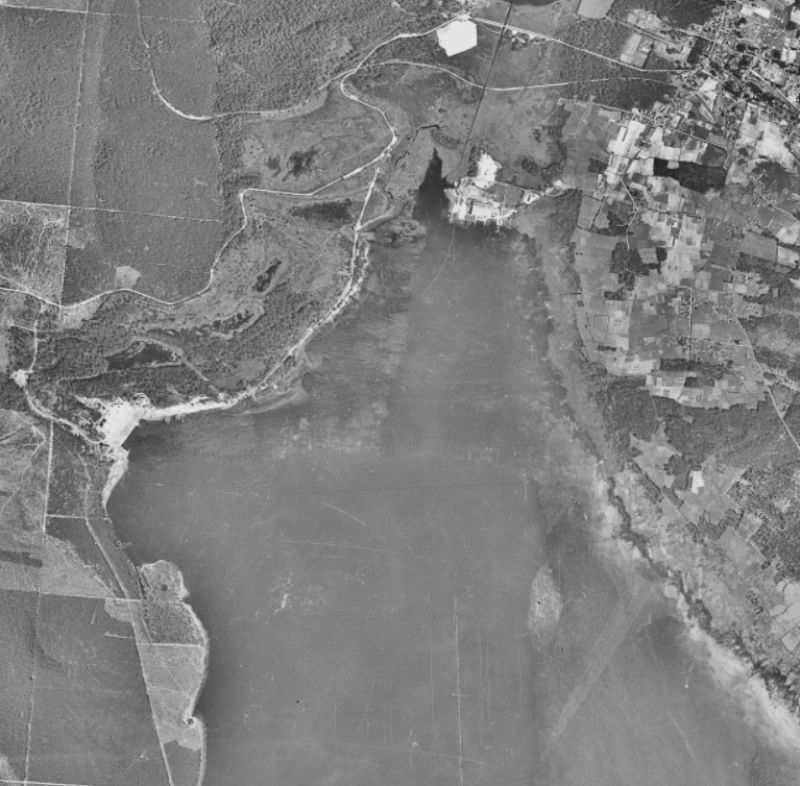 Photo of the same area (IGN)

On 10 September 1955, a final accident bought the end of the Laté 631 in service. F-BDRE crashed near Salambo in the Cameroons. Almost overnight, the base became nearly idle. Only BOAC and Aquila Airways still landed there. In March 1956 heavy snowfalls covered the Biscarrosse area. The Hourtiquets's facilities were luckily undamaged, but sadly this was not the case of the Latécoère factory, where the hangar collapsed on two stored Laté 631s.
From 1956 to 1958, a few Grumann HU-16 Albatross of USAFE came from Gatwick to practice night landings. This was around the end of aviation activity.

The base was assigned to the Department of Defense in 1962 to create the 'Centre d'Essais des Landes', but keeps its status as a seaplane base.
In 1966 an evaluation was conducted with a Civil Protection Catalina for the fight against forest fires. Another assessment was also conducted in 1984 by the DGAC to validate the French civilian pilot training program.

Officially, the base is no longer an airport. But once every couple of years (there is no fixed regularity) the Rassemblement International des Hydravions de Biscarosse (International Seaplane Meeting of Biscarosse), a large fly-in for floatplanes and flying boats, is held. The first RIH, held in September 1991, took place on the site of the old Latécoère hangar. During a RIH all kinds of aircraft align on the Lac de Biscarrosse.


During the 2010 RIH, this DHC-3 Otter floatplane flipped over at Biscarrosse

The aircraft production hangar is long gone, but the office buildings and living quarters have survived. A museum dedicated to the flying boats designed and built by Latécoère, the development of the Aeropostale (French Air Mail Service) and Air France is set up in and around the buildings, which served as offices and living quarters for engineers working at Latécoère when the French flying boat industry was alive and well in the 1930's. There used to be a concrete hangar between the two metal hangars. The rails for the hangar doors are still visible.
The museum is located in the old office buildings of the aircraft production plant. There are a lot of documents on display, models of the Latécoère flying boats, pre-war transatlantic flying boat services and the flights to Africa, old photographs and there is a hall with some smaller floatplanes and flying boats on display (Widgeon, a nose section of a CL-215 and an Albatross which was added to the collection recently) and one of only two built WILSON DEAN EXPLORER II s, which is under a slow restoration process. It is not a large museum, but really very interesting.

Les Hourtiquets 'hydrobase' base on the western shore of the lake has been owned by the French military since 1962. Therefore, it is strictly off limits. It is on the edge of the live missile test firing range of the Aeronavale.


The slipway and sea plane ramp at Les Hourtiquets are occasionally used by Catalinas during these gatherings, as demonstrated here in 2012, a second video can be seen here. 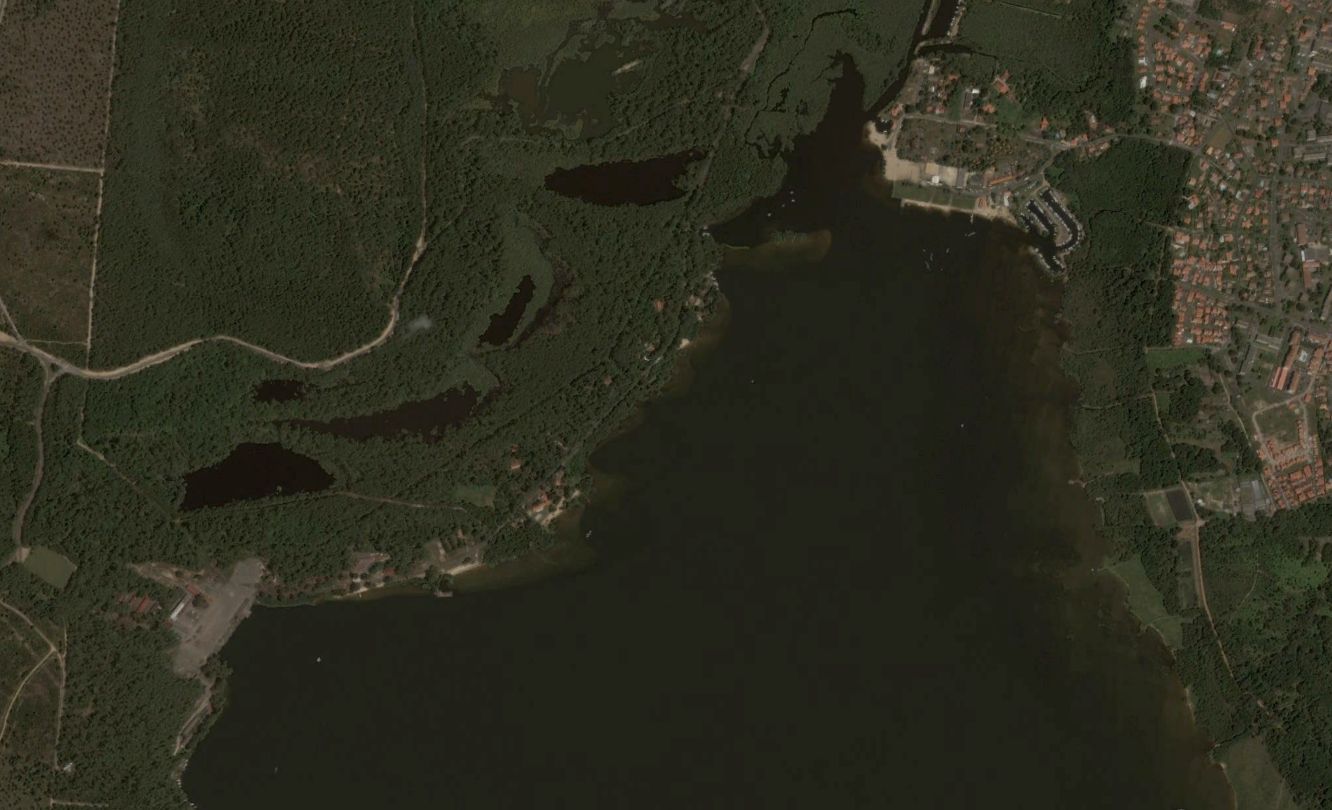