Longues-sur-Mer airfield (Advanced Landing Ground B-11 Longues-sur-Mer) was an airfield on the Normandy beachhead in France, 7 kilometers north of Bayeux.
The airfield became operational on 26 June 1944.
To cover the runway, the British set up anti-aircraft guns on the roof of the Longues-sur-Mer coastal artillery bunker .
Inside the former German bunker they stored the ammunition for the airfield.
An explosion in this makeshift magazine caused the deaths of four soldiers.
The violence of this explosion was so great it led to the total destruction of a blockhouse built by the Germans and a twisted gun barrel in front of the casemate.
The airfield was used by the Royal Air Forces 125 Wing (132 Sqn (RAF), 602Sqn (RAF), 453 Sqn (RAAF), 441Sqn (RCAF).
During their operations from Longues-sur-Mer, both 602Sqn and 453Sqn claimed to have strafed a German staff car (the same claim was also made by 412Sqn RCAF).
The attack severely injured Field Marshall Erwin Rommel, who fractured his skull.
Generalfeldmarschall Rommel had to be hospitalised for weeks, keeping him from the battlefield.

Australian pilots of No 453 Squadron help to flatten the airstrip at Longues-sur-Mer (B-11). Flying Officer D Osborne and Pilot Officer A Rice man a jeep, while Pilot Officer J Scott steadies the two 500lb bombs being used to add weight to a locally acquired agricultural roller. In the background, Spitfires of No 602 Squadron depart on an operation, watched by a runway controller working from a converted sentry box.
(Royal Air Force 1939-1945: Fighter Command © IWM (CL 509)

Wing Commander A G Page, leader of No. 125 Wing, in the cockpit of his Supermarine Spitfire Mk IXE 'AGP', with a 500-lb GP bomb under the fuselage and two 250-lb GP bombs on wing racks, ready for take off at B11/Longues, Normandy. Later the same day, Page was to shoot  down his 14th enemy aircraft, a Messerschmitt Bf 109, returning to Longues wounded in the leg and his aircraft damaged by anti-aircraft fire.
(ROYAL AIR FORCE: 2ND TACTICAL AIR FORCE, 1943-1945 © IWM (CL 726))

The airfield was closed on 4 September 1944. By 1947 all visible traces of the airfield had disappeared. 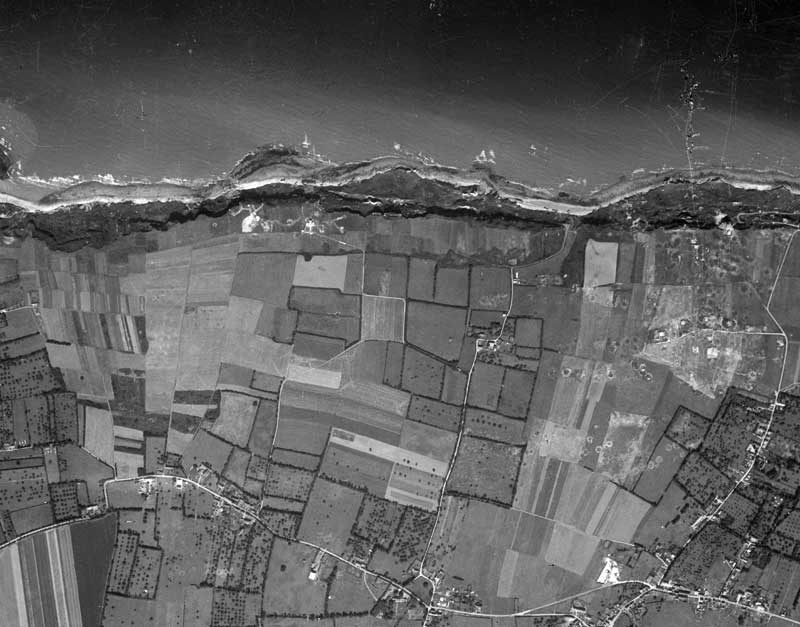 The location of B.11 Longues-sur-Mer in 1947. Bomb craters from the pre-D-Day bombing missions were still recognisable to the upper left, but the airfield had disappeared without a trace (IGN.fr)

The same location as the photo above, drawn in a map with the alignment of the former airfield (map via Allan Hillman)