Ludham Airfield (RAF Ludham, also known as RNAS Ludham and HMS Flycatcher) was an airfield ... kilometer north-northwest of London,
The airfield at Ludham was built by Richard Costain Ltd. The airfield had three concreted and tarmacked runways, with the main runway being 1400 metres long. A perimeter track, 12 metres wide, connected all the runways. There were also 12 dispersal pens and 9 hardstandings, and 18 single and 17 double (USAAF-type) hardstandings of pierced steel. A T2 hangar stood on the Technical site and four blister hangars were also erected.
Accommodation was in temporary buildings which provided housing for 190 officers and 1519 personnel.  and became operational flying commenced in November of 1941 as a second satellite for the main fighter station at Coltishall sited north of Norwich, three tarmac-covered concrete runways and ancillary buildings being built on the land which had belonged to Fritton Farm. 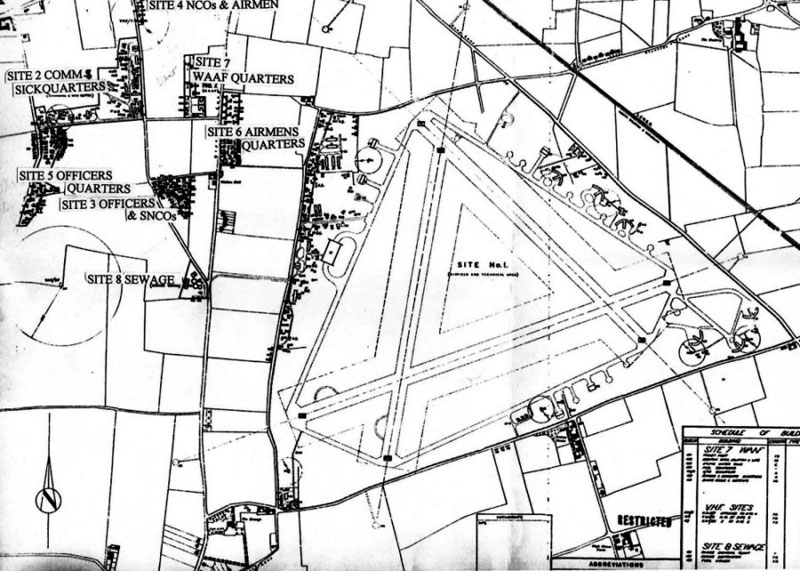 Map of Ludham, around the time the airfield was completed (LudhamArchive). 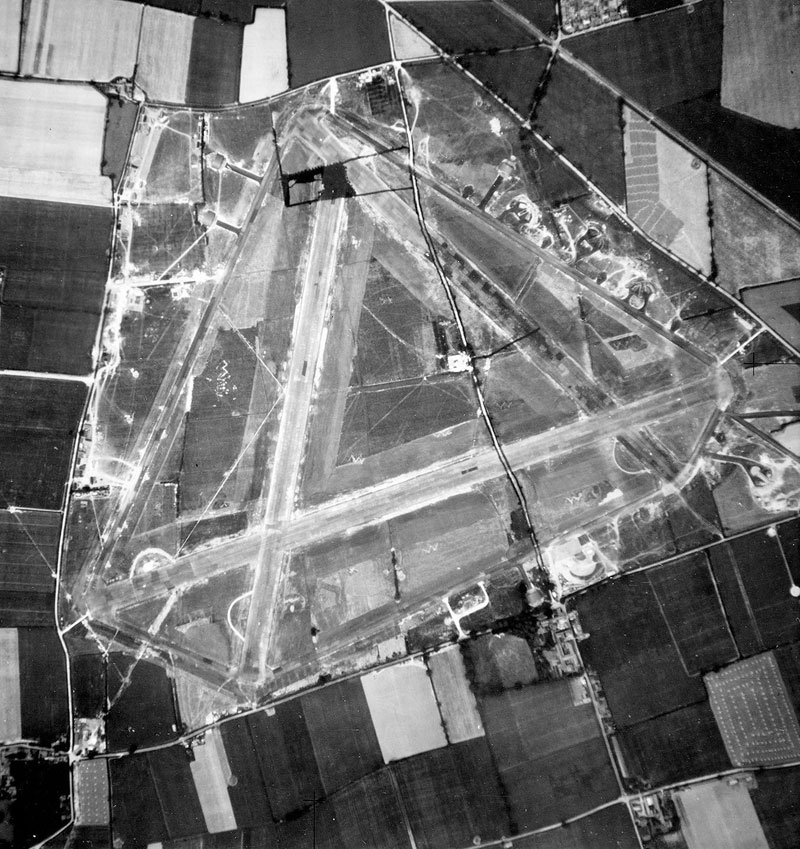 It began being used as a forward base for fighter command when the Spitfires of 152 squadron started to make daily use of the airfield. It would also be used by 19, 91, 167, 602, 603, 610 and 611 (Spitfire) Sqns and 195 (Typhoon) Sqn over next three years, but none were to stay for very long. 610 Sqn - one of the most celebrated Auxiliary Squadrons - was involved in flying cover for Operation Jubilee, the Dieppe Raid, led by flying ace JE "Johnnie" Johnson. 195 Sqn flew offensive sweeps and armed reconnaissance missions across northern France.

Fighter duties from Ludham were fairly regular and generally coastal and convoy patrols of little note, but the results of one sortie on 28 January 1943 by 167 Sqn, was particularly noteworthy. 167 Sqn Spitfires were scrambled to intercept and shoot down a German Ju 88 that was harassing shipping off the East coast, witnessed by HM The King and Queen Elizabeth, who happened to be visiting the station that afternoon.
The station was closed to flying operations in July 1943 and work commenced to build three concrete runways, taxi tracks and aircraft hard standings. This work was done to prepare the station for its next intended occupants, the U.S. Eighth Air Force. Although allocated to the USAF as Station 177 in August 1943, no American units were based there.
The upgrade work took a year, after which time the station remained empty of all but its maintenance complement. Although not an operational station in its own right, Ludham was kept open by a skeleton duty crew to provide emergency recovery facilities for American bombers returning from raids on the continent. RAF Ludham was the first friendly airfield on the flight home to Norfolk. In total 8 B-17s, 1 B-24, 1 P-47 and 1 P-38 aircraft did have to either crash or make emergency landings at Ludham or in the surrounding area.
Eventually, on 24 August 1944, the airfield was transferred from 12 Group RAF to the Admiralty and occupied by the Mobile Naval Airfields Organisation. On 4 September 1944 Ludham was commissioned as HMS Flycatcher, RNAS Ludham under the command of the Senior Officer Mobile Naval Airfields Organisation. At RNAS Ludham the MNAO assembled and despatched the first five Mobile Naval Air Bases (MONAB) and one "Transportable Aircraft Maintenance Yard" (TAMY). On 23 February 1945 HMS Flycatcher moved from Ludham to RAF Middle Wallop in Hampshire as this location was more advantageous to shipping the assembled units to the Far East.
The RAF then took back control of Ludham and wasted mo time in using the station. 602 (City of Glasgow) Sqn arrived within days of the navy leaving and began operational sorties the following day with their Spitfire XVs. They were joined by 603 (City of Edinburgh) Sqn the next day, also flying Spitfires. 603 Sqn's operations included dive-bombing attacks on German V-weapons sites in Holland. Both squadrons would return to Coltishall on 5 April. The next unit to use Ludham was 91 (Nigeria) Sqn, whose mixed bag of pilots from America, France, Australia, New Zealand and the UK flew their 18 Spitfire F.XXI's in from Manston on 8 April. The next day they attended a party at RAF Coltishall before carrying out their first operational mission on 10 April; an armed reconnaissance flight over the Netherlands. During this mission, two aircraft were shot down by anti-aircraft fire and crashed into the sea off Den Helder. The pilots managed to bail out and were rescued and returned to Ludham uninjured. They were back flying within a few days.

Armourers set the tail fuses on a clutch of 500-pounders in front of a Spitfire XVI of No 603 Squadron at Ludham, March 1945. The bombs were destined for V-2 sites in the Netherlands. Rangers and interdiction sorties were also flown from this Norfolk location, but the advancing land forces would soon take the ground battle beyond the range of UK-based Spitfires (© IWM (CH 14808) via Wikimedia).

After VE-Day they were joined by 1 Sqn, also flying the new Spitfire XXIs, on 14 May 1945; this was to be a  brief stay before both units departing on July 14th. No further flying would take place at Ludham; the station was placed on Care & Maintenance on 8 August 1945. Control transferred to 60 group Fighter Command, on 3 September and the accommodation sites were straight away utilised for housing personnel from surrounding RAF establishments, the station becoming officially titled 60 Group Personnel Holding Unit on September 25th. The site officially closed in April 1946. 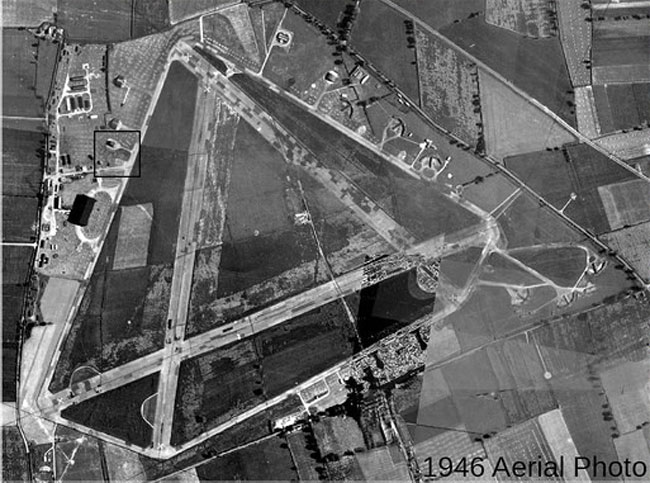 1946 aerial photo, notice the small white X marks on the thresholds of the runways (RAF)

In 1961, the Air Ministry land was sold to the Norfolk County Council, and soon re-acquired by local farmers. Although much of the runways, taxiways and hard-standings were broken up for use as hardcore, a small part of the east/west runway remained. In the mid 1960’s this was utilised by one Mr. Peter Boardman, who owned a De Havilland Hornet Moth, which he used to fly to the European mainland for pleasure. At some point, the North Norfolk District Council authorised the strip to be used by the Westwick fleet of crop spraying aircraft. They used a 600 yard strip of tarmac and in their infinite wisdom, the council allowed them to move a wartime hangar from one of the dispersals. They made a provision though: it had to be re-erected on the end of the strip of tarmac! This of course was the equivalent of building a garage in the middle of a motorway: it was built right in the path of aircraft taking off and landing. Despite this hazard, the airfield was adequate for the task and when the crop sprayers moved out, private light aircraft owners made the strip their base, which currently still serves as a private airstrip.
From the mid 1980s until 1993, Ralph Hull leased the airfield and hangar from its new owners to rebuild a Spitfire IX. He didn't testfly TE566 from the airfield whan he was done, but he did start a second Spitfire restauration project before he moved his project to Catfield.
Various buildings still remain around the perimeter, although most of the airfield site has returned to agriculture. What remains of the perimeter track, greatly reduced in width, is used by farmers to get to their fields. 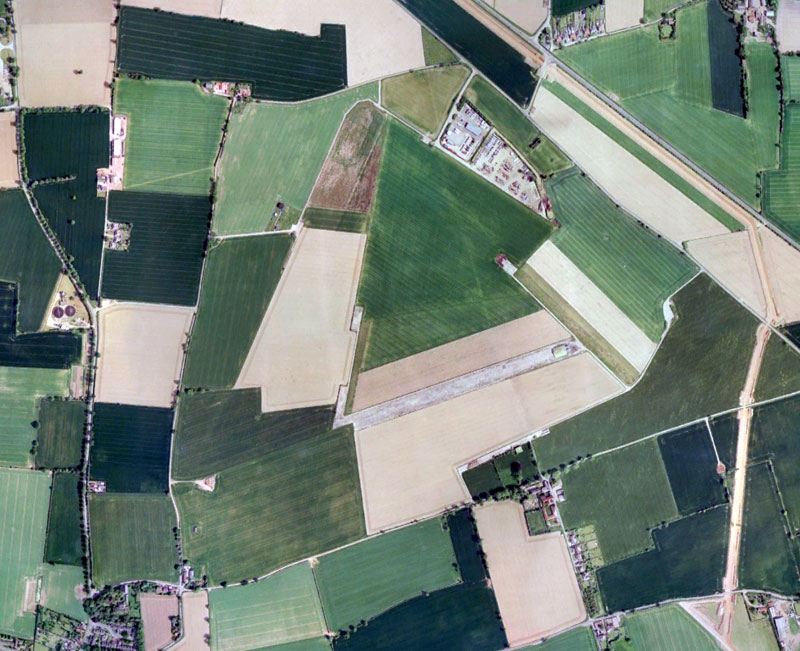 Overview of Ludham in 1999 (Google Earth)

RAF Ludham had two Watch offices (control towers), both situated near the north-western edge of the airfield to the west of Malthouse Lane. A Watch Office for Fighter Satellite stations, with the later (1942) addition of a Switch room, had been constructed in 1941. In 1943 it was replaced by a Watch Office for all Commands, which is the larger building adjoining it. Both were restored in 2000/2001 with the intention of opening an airfield museum, but nothing seems to have come of this plan and the buildings remained empty. In 2012 it was reported in the news that the local Council had sold them to a private owner who intended to restore and convert the larger structure for use as a holiday home. By 2015, this plan was reported to also have stalled. 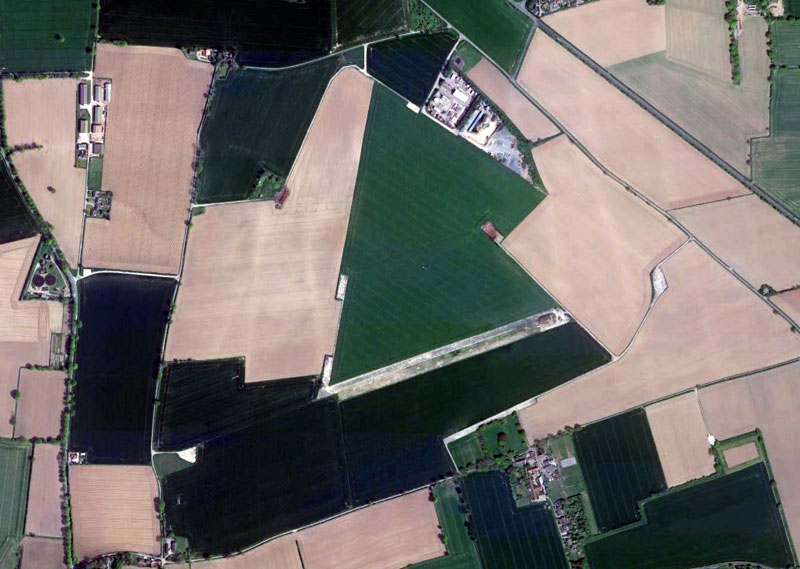