48°31'40"N 006°38'06"E
runway: 13/31 - 2550meters/7,900feet - concrete
Air field Lunéville-Chenevières (french: Aérodrome Lunéville-Chenevières) was a military airfield 80kilometers west of Strasbourg, France.
The airfield was built between 1953 qnd 1955 when during the Cold War NATO faced several problems when attempting to solve the air power survival equation in case of both conventional and nuclear wars. The primary operating bases for NATO air forces were built on relatively small parcels of land with very limited dispersal space. It was therefore decided to build dispersal bases away from the primary bases to be used in the event of an emergency (read: war). Lunéville-Chenevières was selected to be one of these "NATO Dispersed Operating Bases", because the nearby air base Lunéville-Croismare was too close to the city of Luneville to be expanded by NATO standards.
Lunéville-Chenevières AB never had any flying units permanently assigned to it and was only used for dispersal training. In spite of that it did require the same level of equipment as a standard airbase. Therefore NATO security personnel was required to control base access, guard equipment, munitions and suppllies and prevent vandalism. Chenevieres Air Base was designed for 50 fighters with three large hangars constructed. When construction was finished Det #2, 50th Air Base Group was designated as host unit. Aircraft of the 50th Fighter-Bomber Wing (Toul Air Base) exercised at the base regularly from 1957 through 1959. 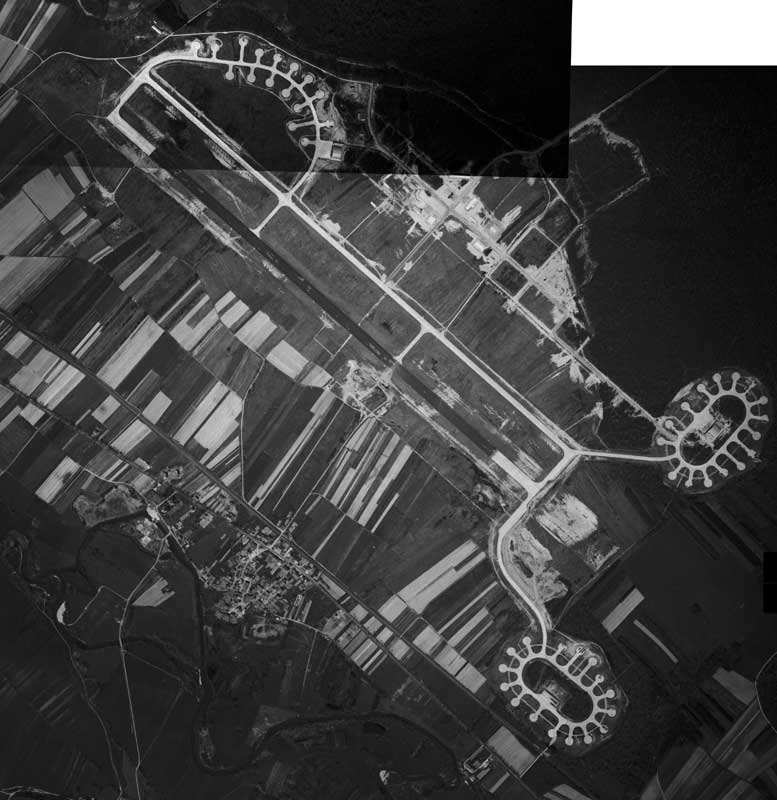 Lunéville-Chenevières Air Base in 1958 (IGN, via Géoportail)
Det#2 deactivated on 1 September 1959, and the airfield was turned over to the US Army, although a small USAF detachment (Det7, 7514th Support Group) maintained base security. Army Artillery units utilised the base until it was handed over to the French army in 1964. Under French control, the facility was renamed Luneville-Quartier La Salle and has been used for equipment storage and as a communications facility. 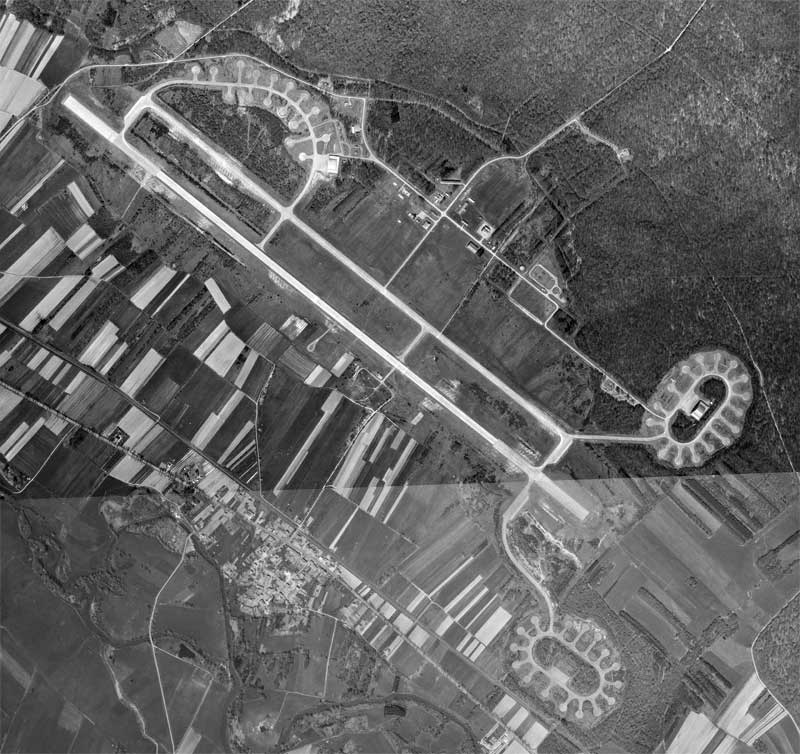 Lunéville-Chenevières Air Base under French control in 1968 (IGN, via Géoportail) 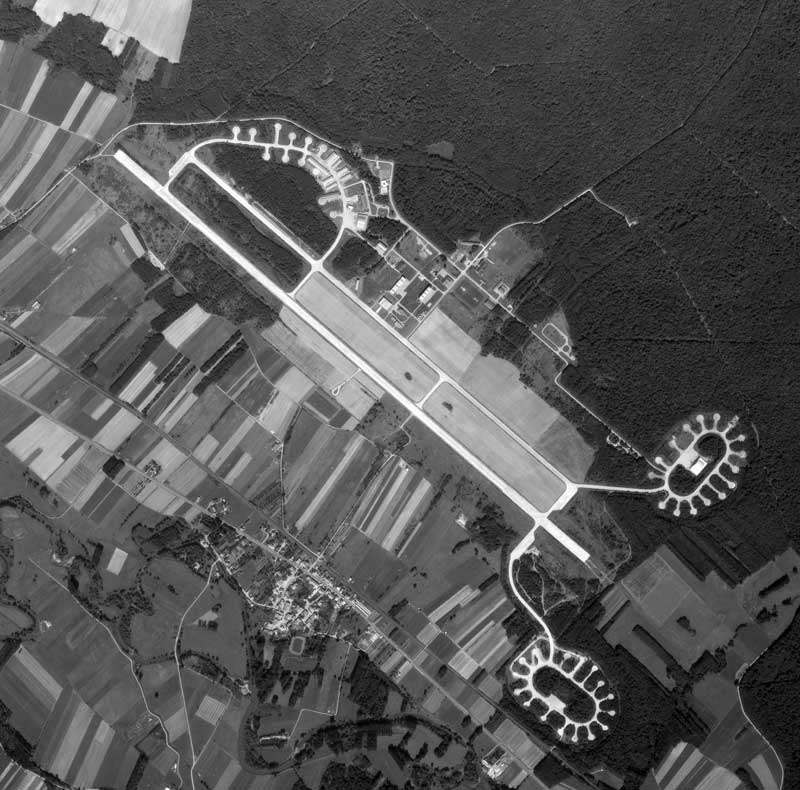 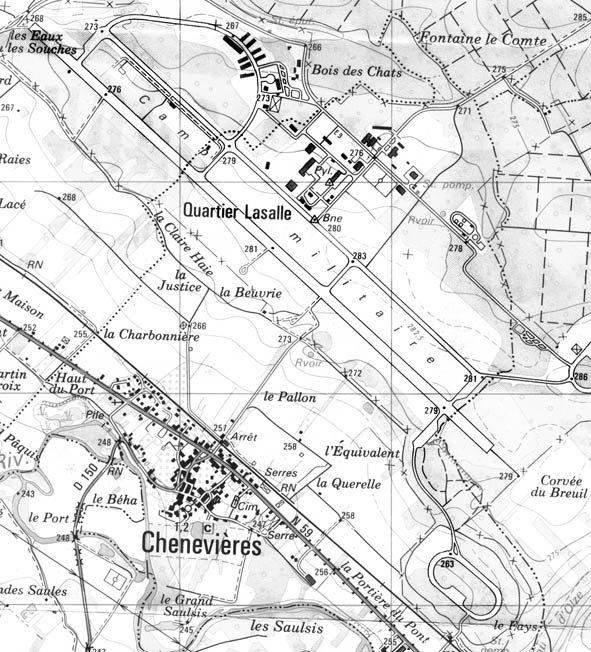 Map of the former airfield, depicted in 1981 as 'Camp Militaire', military base. 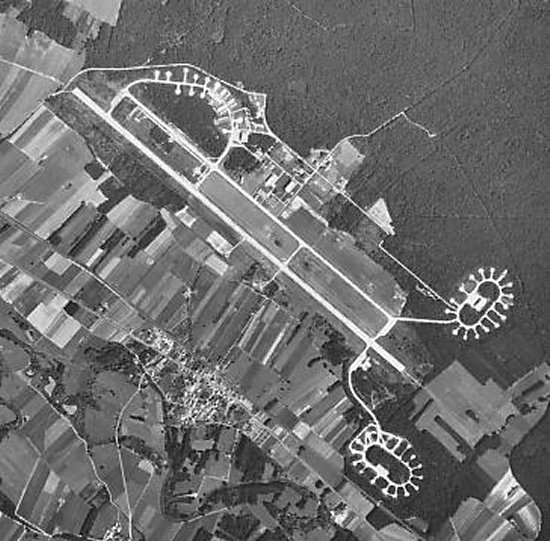 The former air base in 1985 (IGN, via c-and-e-museum.org)
Today the airfield is still military property, although it is no longer complete. The entire southeren dispersal (marguerite) was detached from the airfield when a new road was constructed around the town of Chenevières. It was then sold off and converted into a racing circuit.
The remainder of the base appears to be in a reasonable condition, althouth the tree lines are closing in on both the runway (especially the SE-end), taxitracks and remaining dispersal areas. The old USAF hangars on the dispersals north of the runway appeared to be in good shape (on Google Earth) in 2003. 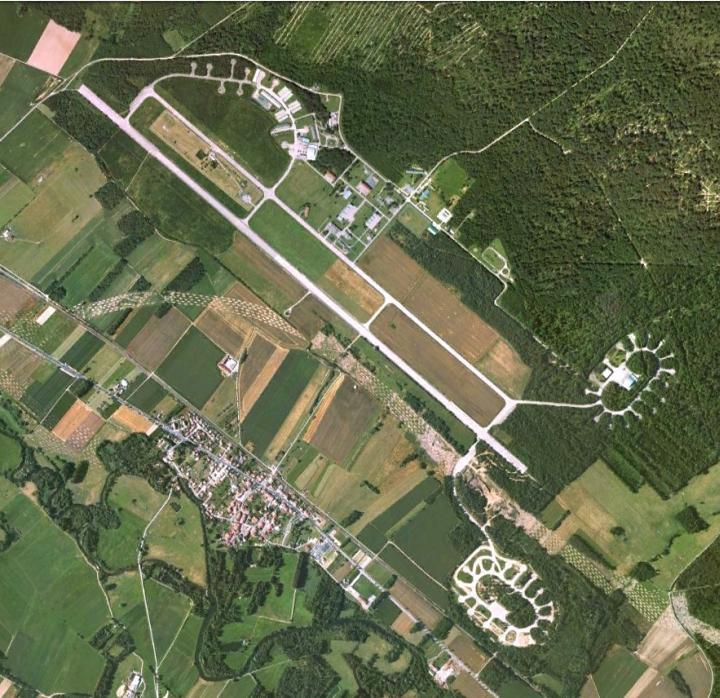 Lunéville-Chenevières Air Base in 2003 (Google Earth) 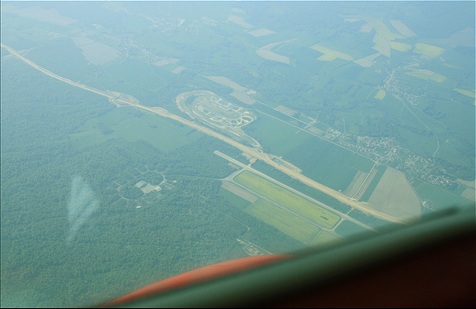 View looking south from the air of the east side of Lunéville-Chenevères. The fat yellowish line is the road that cut off the southern marguerite. 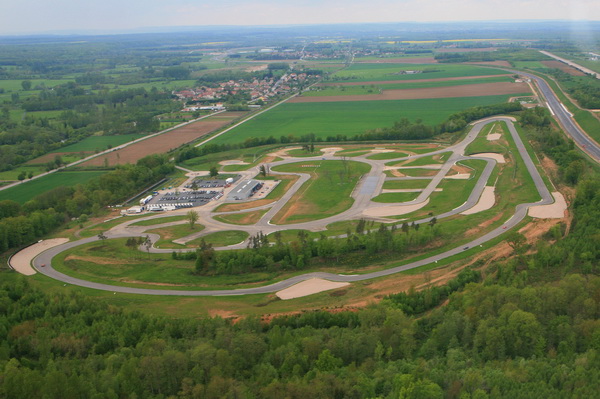