Lunéville-Croismare airfield (french: aèrodrome de Lunéville-Croismare, also known as Advanced Landing Ground (ALG) Y2 Luneville, ICAO: LFQC) is an airfield 310 km east of Paris.
The ALG "Y-2 Lunéville" , featuring a 1500x36m PSP runway and room for 76 aircraft, was turned over for operational use by the Twelfth Air Force on 25 December 1944. The 324th Fighter Group flew P-47 Thunderbolts from the airfield from January through May 1945. Control of the airfield was turned over to French authorities on 29 May 1945. 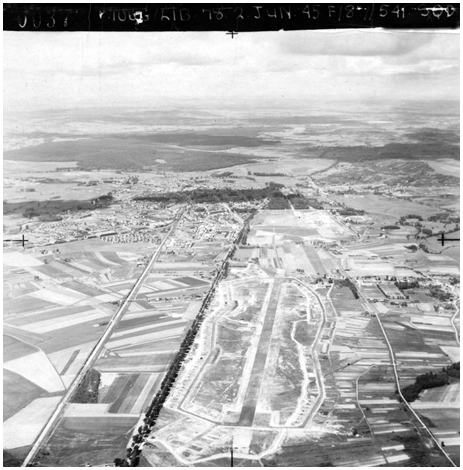 After the war, a discussion was started on the feasibility of a civilian airfield on the site of ALG Y-2. In 1947, the municipality of Lunéville decided in favor of a civilian airfield and permitted the acquisition of grounds. In December 1950 however, a national decrete ordered the airfield to be enlarged for use by NATO. Expropration began in February 1951.
Although NATO ultimately decided not to use the site, a dispersion airbase was still built on the World War II site in the early 1950s. The western end of the new runway coincided with the original western end of the PSP runway, but it was extended much further to the east. It was assigned to the Royal Canadian Air Force and Force Aèrienne Française as a dispersal airbase should the Cold War turn 'hot'. Although it was used during exercises, it was never used in anger. In the event of a conflict between NATO and the Eastern bloc, Lunéville-Croismare was supposed to host Tactical Reconnaissance Squadron (ERT) 1/33 "Belfort", while its siter squadron ERT 2 / 33 "Savoie" was to be deployed on the French base of Lahr, Germany. Since a real armed conflict never took place, Lunéville-Croismare was, in practice, used only once or twice a year by the squadrons 1/33 and 2/33 during the allied air maneuvers. As Cognac is far from the theatre of operations assigned to 1st CATAC, the 33e ER operated from Lunéville-Croismare alongside units from other NATO countries during most of the combined maneuvers in which it participated.

What remained of Y-2 Lunéville in August 1950. Four months later, the decision was made to offer the site to NATO as a dispersal base (IGN).

Lunéville-Croismare hosted ten F-84G Thunderjets from both squadrons that constituted 33e ER at the end of July 1953, during the Coronet exercise. On this occasion, the French pilots carried out numerous tactical reconnaissance missions over Belgium, essentially making oblique and vertical aerial photographs of radar and aerodrome stations. During this exercise, the F-84G '630' (51-10630) belonging to 1/33 "Belfort" was destroyed on the ground on 26 July 1953 by the explosion of its jet engine at Luneville-Croismare. Fortunately,  pilot Lieutenant Chautemps came out unscathed.
In a series of exercises from 21 to 28 September 1954, twenty-nine of the thirty-two F-84G Thunderjets at 33e Escadre Reconnaissance were based at Lunéville. They were accompanied by one NC701 Martinet for liaison, and Nord 2501 Noratlases and C-47 Dakotas, taking care of personnel transport to and from Cognac. Manoeuvers began with Exercise Indian Summer, organized as part of the 4th Allied Tactical Air Force (4th ATAF), which brought together French, American and Canadian units to photograph the regions around Frankfurt and Fulda in Germany. Immediately following Indian Summer , Exercise Shooting Star focused the staff of 33e ER on high altitude (30,000 feet) reconnaissance missions between the Rhine and Munich. And lastly, Exercise Lorgnon III took place in a more national context. Conducted for the benefit of the French Air Defense Territory (DAT), it consisted of numerous low-level photo reconnaissance flights of several CATAC aerodromes, many of which were still under construction.
From 20 to 28 June 1955, during the Combined Exercise Carte Blanche : twelve F-84G ERT 1/33 "Belfort" were detached from Cognac to Lunéville. In five days of operations, the Thunderjet aircraft recorded 163 hours of flying during 123 missions (two missions per day per plane) over northern France and Benelux. 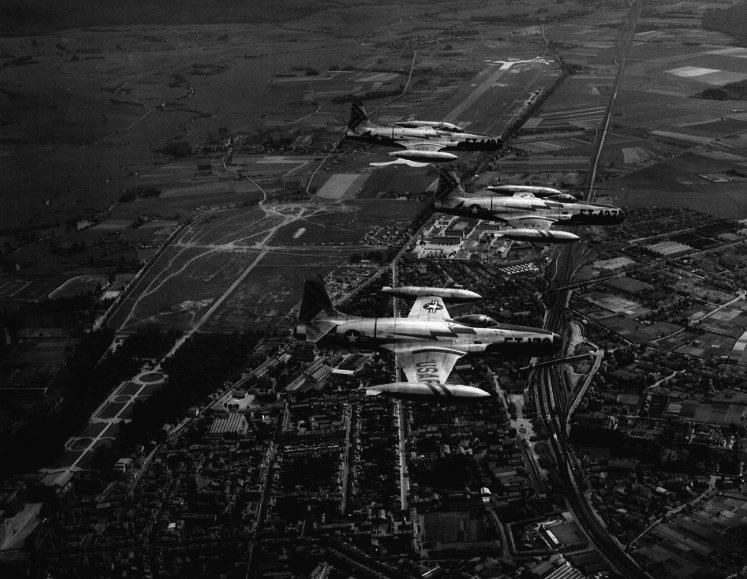 Three USAFE 66TRW RF-33s out of Sembach AB passing west of Lunéville-Croismare. which can be seen in the background (france-air-nato.net)

composite of Lunéville-Croismare in 1961 (IGN)
After France left NATO in 1967, the usage by the Armée de l'Air ended and the airfield was handed over to civilian control. The west side of the airfield, including the 09 threshold, is now built over with a commercial zone. A flying club is still active at the airfield, albeit with a runway that is much reduced in length and width.

The old contours on the west side of Lunéville-Croismare are still recognisable, despite being built over. Not much had changed until at least 2016 (Google Earth).
contact us about this airfield