Manby airfield (RAF Manby, ICAO: EGXA) was an airfield 205 kilometers north of London.
It opened in August 1938 during the pre-war expansion period and became known as N01 Air Armament School of 25 Group of Training Command. The school was responsible for the training of armament officers, bomb aimers, air gunners and armourers and took over control othe bombing range at Theddlethorpe (now RAF Donna Nook HQ).
In July 1944 the school was renamed the Empire Central Armament School and this changed again in November to Empire Air Armaments School. 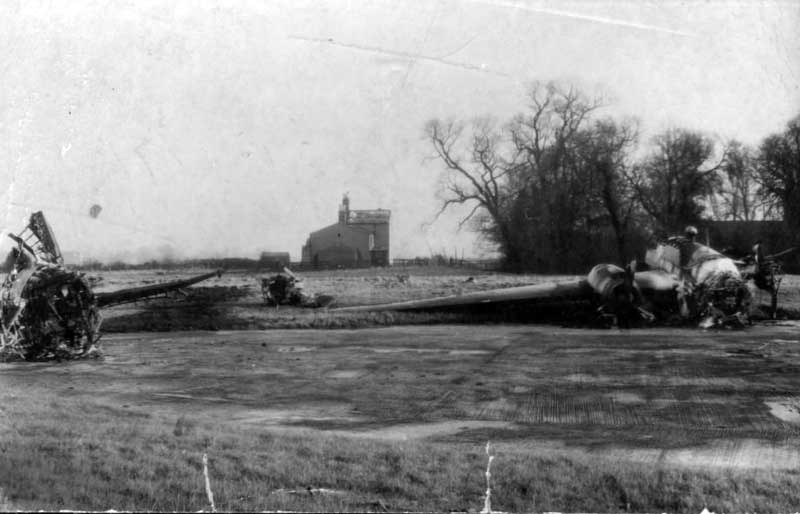 During the war, an Armament Ground instructor at Manby went as a passenger on a Wellington bomber to RAF Hatfield to collect some spares. On the way out one of the engines cut, but they carried on to Hatfield where it was fixed and they flew back. When they came in to Manby the other engine cut and they clipped the trees. An engine fell off, hit the house in the background and killed either a pregnant woman or woman and her child . The aircraft broke in two (story as posted on airfieldinformationexchange)

After the war, Manby continued as a permanent RAF station and in July 1949 the RAF Flying College was formed.
According to a message on RAF-Lincolnshire.info, Manby was used immediately after the war to store a small collection of Luftwaffe advanced fighter jets.
To take some pressure off Manby, nearby RAF Strubby was reactivated as a relief landing ground. Mandy became very busy with the 'Aries' series of navigation training flights, involving an Avro Lincoln ('Aries III') ant two English Electric Canberras ('Aries IV' and 'Aries V'.

The crew of Avro Lincoln 'Thor II' from the Empire Air Armaments School at RAF Manby, talk to a member of ground crew who is checking bombs on a bomb trolley in front of their aircraft (photo © IWM ((MOW) R 2416) 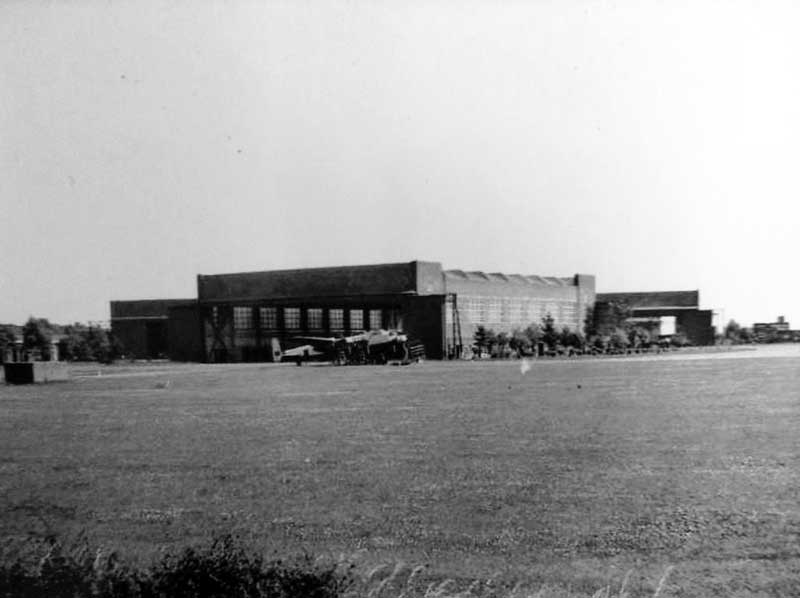 Refresher courses were given in a squadron of Jet Provosts, formed in 1958. In July 1962 the College of Air Warfare and the Shool of Refresher Flying were formed at Manby.
In 1974 the College of Air Warfare moved to RAF Cranwell and the Shool of Refresher Flying was moved to RAF Leeming. RAF Manby was closed in March 1974, although its married quarters remained in use for RAF Binbrook. 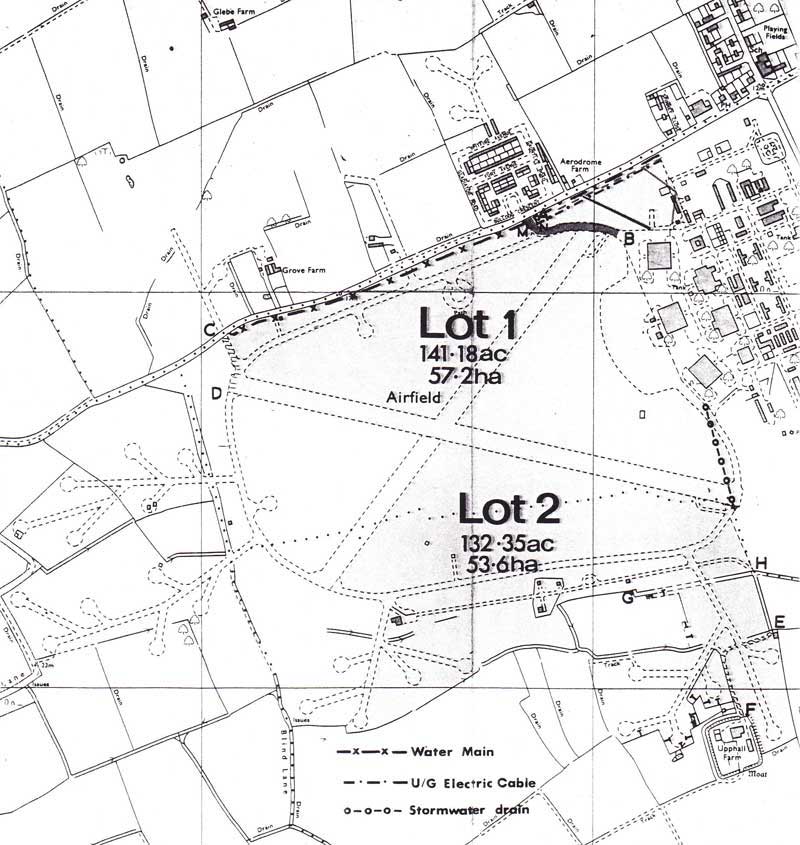 Map from the sales brochure of the airfield in 1979, showing not only the two runways, but also the dispersal areas of the old airfield.

By the mid-1980s the runways and dispersas were dug up to make room for agriculture, although the taxi track remained. The 'new' control tower, built only 20 years prior on the south side of the airfield, had been severely vandalised. The hangars were used for grain storage.

Manby in the summer of 1989, photographed by Ossington_2008 . From the scarring in the soil you can still recognise the locations of the two runways.

The hangars were sold to Winchester Marine in May 2010. By that time, the old Watch Office (prewar control tower) was in use by Motorplex.
In June 2013, permission was asked and granted for the removal of the perimeter (taxi) track. oddly enough the 1960s control tower was to remain in the application to tear it up, part of the track was to remain for access. On 1 August 2013 it was discovered that the old and unique prewar watch office had been demolished. Several fires to buldings at Manby also occurred that year. 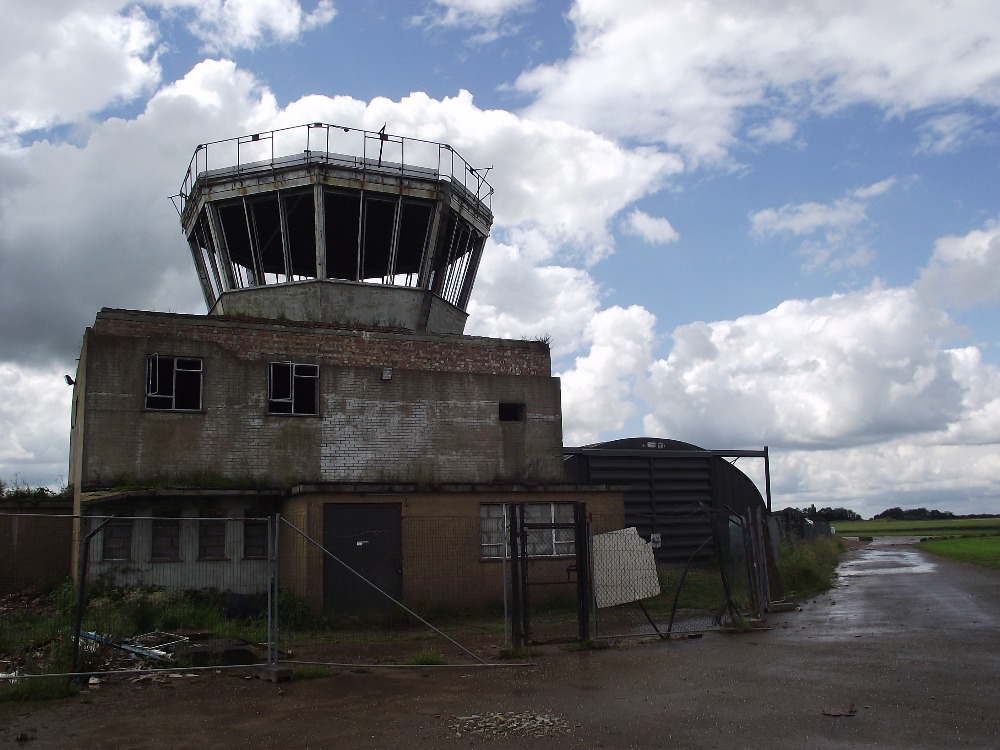