Air field Marigny (french: aérodrome Marigny-le-Grand, or Marigny Air Base, ICAO LFYM or LF5121) was a reserve NATO airfield 110 kilometers east of Paris in the Marne department, France.
In 1952, construction of Marigny air base began. It was intended as a 'bare base' facility, with a parallel runway, barely any infrastructure and three squadron sized dispersals known as 'marguerites', creating enough room for an entire wing. All NATO reserve air bases were built by order of NATO between 1950 and 1955, either by upgrading existing airbases, or building completely new ones. The runways at the existing airfields were extended or new airfields were built to NATO standards. Their runway length was to be 2400meters with a preference for an emergency parallel runway (23 meter width) of the same length. NATO minimum for the back-up runway was 2000 meter.Later, between 1958 and 1961, the main runways of operational bases were lengthened to 10.000 ft class (around 3000meters) with the addition of so called overruns. 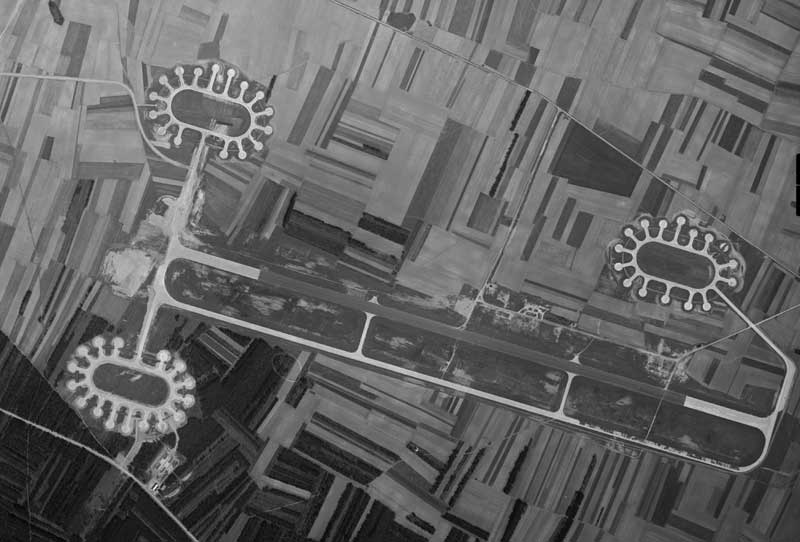 Marigny-le-Grand in 1956, when construction was nearly complete. A small logistics camp was built on the southwest side of the airfield and the airfield still had its original 'short' runway. without the overruns (IGN, via geoportail.fr) 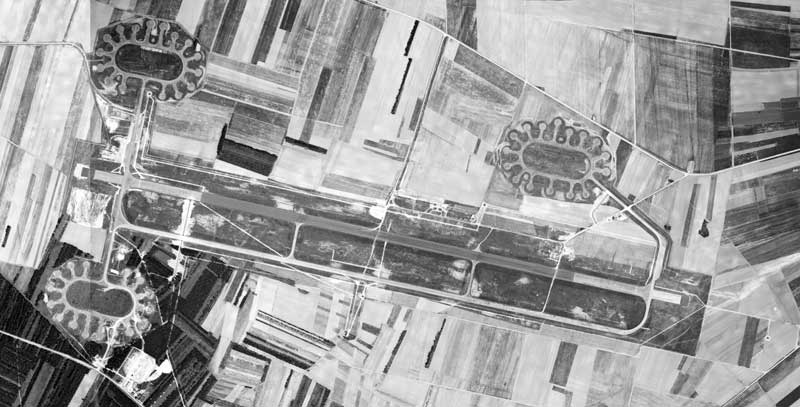 By 1962, overruns had been built on both ends of the runway, with only displaced treshold markers (chevrons) applied on both ends (IGN, via geoportail.fr) 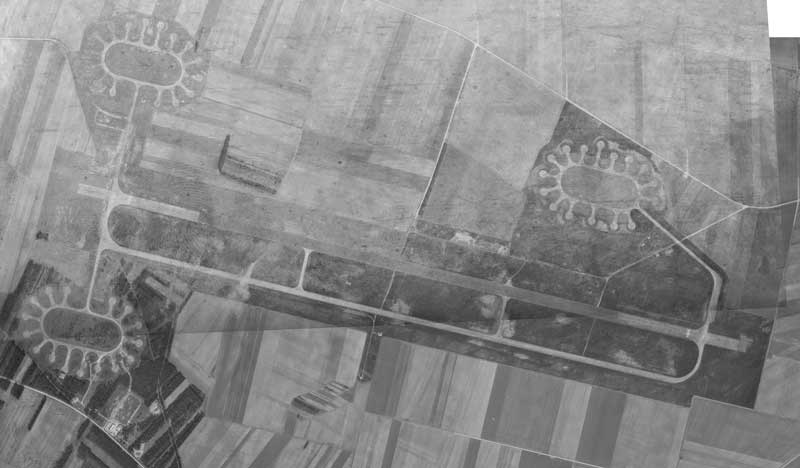 Although NATO had left France 2 years prior, the runway was still not closed with large 'x' markings in 1969, suggesting that the Armée de l'Air still occasionally used the airfield (IGN, via geoportail.fr) 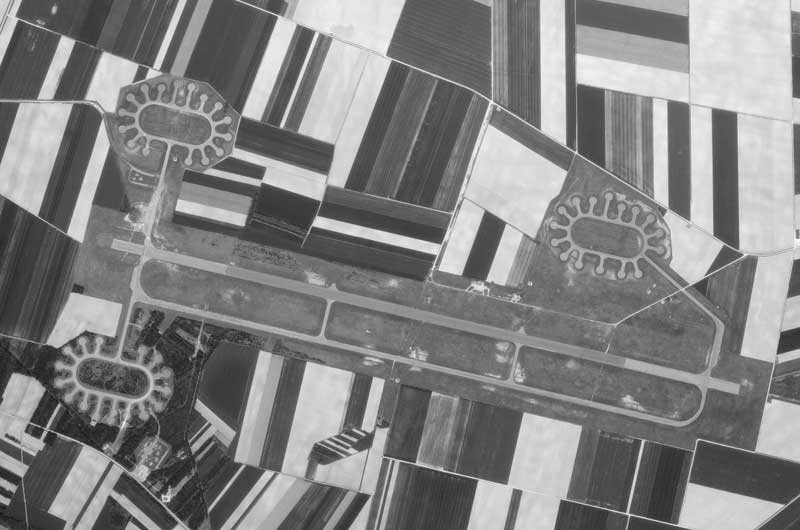 The treshold markers had left in 1980, but a fresh layer of asphalt appeared to have been put on the center 2 kilometers of the runway (IGN, via geoportail.fr). 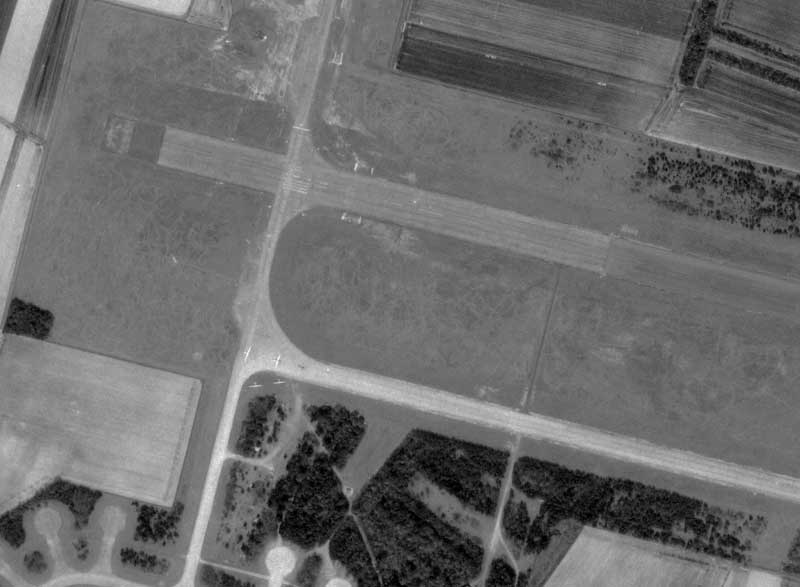 4 gliders and (presumably) a tow plane are visible in this 22 April 1984 photo. Also visible is a faded but painted treshold and '11' markings on the runway (IGN, via geoportail.fr) 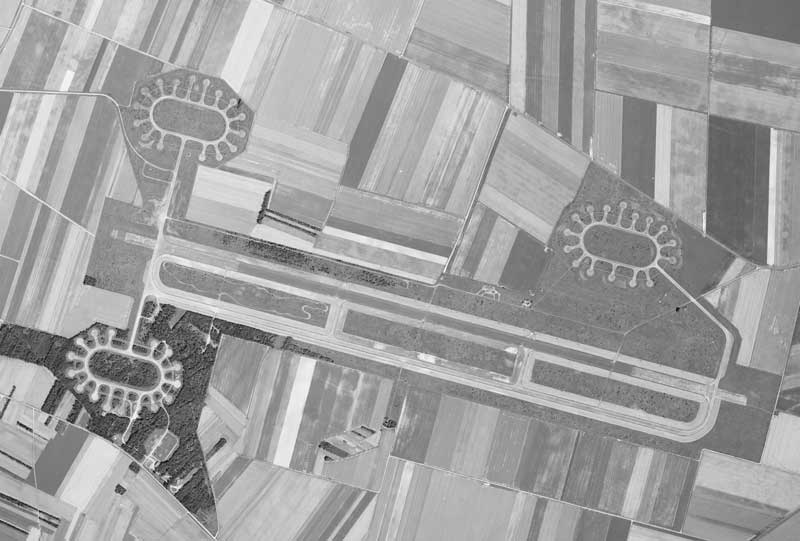 The airfield in 1990. As the borders of the runway and taxitracks had still been mowed, it is assumed that the airfield was still an active airfield (IGN, via geoportail.fr).

The airfield is known to have been used by glider pilots in the mid 1980s. well into the 21st century, the airfield was still owned by the French Ministry of Defence, but plans to convert the air base into a solar power plant have been abandoned. Paradoxally, the construction of the sleeping airbase in the 1950s is the reason why the former airfield is classified as an ecologically protected area for fauna and flora, protected under the EU Natura 2000 (since 2006) plan. The military facility allowed the land to escape cultivation and helped maintain environments dry grasslands, as the rest of the chalky Champagne region saw 60 years of modern development.
Today, many birds take the place of aircraft taking off. Marigny is a protected bird sanctuary and therefore it is not freely accessible to the public. For these precise reasons large dance festivals (also known as 'raves', which were held here in 2001 and 2003) are no longer allowed. The air base is still in reasonably good shape, but the few buildings (hangars?) on the southwesterly dispersals have been removed. Some bunkers and antennas (still used by the Signal Corps) remain on the site. 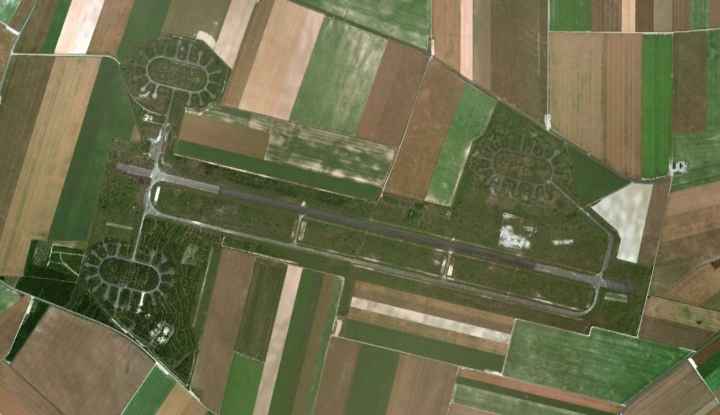