Air field Rhodes Maritsa (Greek: Αερολιμένας Ρόδου - Μαριτσών, also known as Aeroporto di Martisa 'G. Pessi Parvis', ICAO: LGRD) is an airfield on the island of Rhodes in Greece.
The airfield was built in 1938 during the occupation by the Kingdom of Italy of the Dodecanese. It served as a base for the Regia Aeronautica (Royal Italian Air Force) as airfield 801. The base housed a squadron op Savoia-Marchetti SM.81 and a squadron of FIAT CR32 biplane fighters. In 1940 the airfield was bombed by the RAF. The airfield remained under Italian control until september 1943 when Italy surrendered to the Allies.
The Allies then tried to gain control over the Dodecanese Islands (which includes Rhodes) to use them as a base against the German controlled Balkans and Greece under the codename 'Accolade'. Their effort failed and all of the Dodecanese fell to German control in two and a half months at great cost to the allies in men and shipping.

In 1947 the Dodecanese islands were ceded to Greece. Rhodes Maritsa became the main airport for the island. It remained the main airport until 1980, when the new Rhodes International Airport 'Diagoras' opened. Maritsa then fell to the command of the Hellenic Air Force.
Although still listed as an active airfield, it was already listed in Flight Information publications as 1 HR PPR in 1992. The same publication reported RWY 14/32 as 'considered unusable due to sinking asphalt'.
In 2008 a spotter remarked: "As we where in a hotel very close to Maritsa I can tell you that they fly not often." On the platform he saw only a single "Super Puma" SAR helicopter on the platform. Military cargo aircraft (C-130, C-27J, Embraer and Gulfstream) flew to Rhodes daily, but all used the international airport. In spite of this lack of activity the military guards appeared to be very aware of what went on around the base, as he reported two girls taking pictures of each other. They were immediately visited by military police.
In August 2013, I received an email from a member of AirTeamImages. While visiting Rhodes on vacation he went for a look at Maritsa airfield. He noted that at Maritsa there are three abandoned aircraft: a Hellenic Air Force T-33 (as yet unidentified) and two light aircraft: a Morane Rallye (SX-AFO) and a PA-31 (SX-AGK). Google Earth imagery showes that these three have been stored on the westernmost platform since before April 2009.
The airfield is known to be used occasionally for car races. 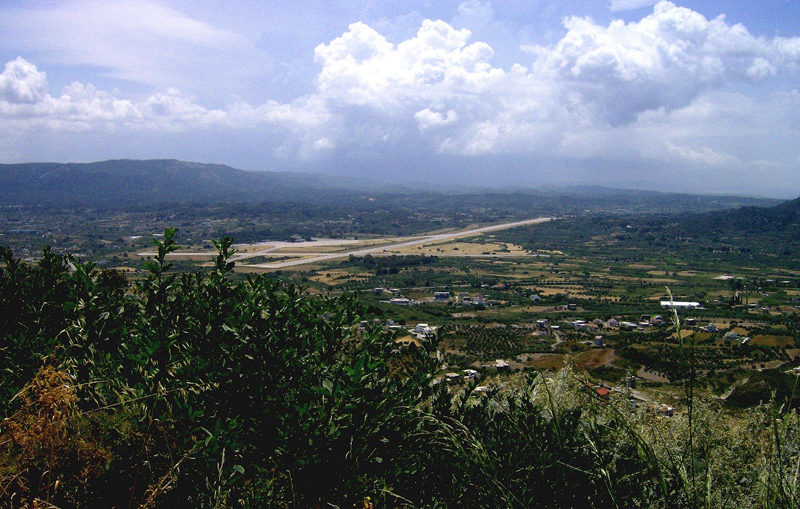 Maritsa as shot by Z Fedyczek in 2011 (Panoramio) 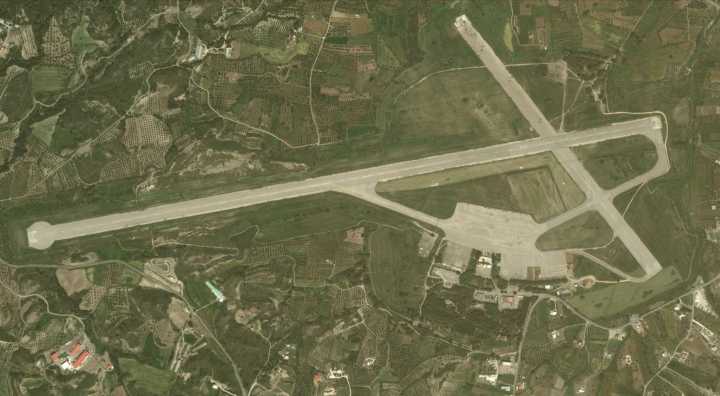